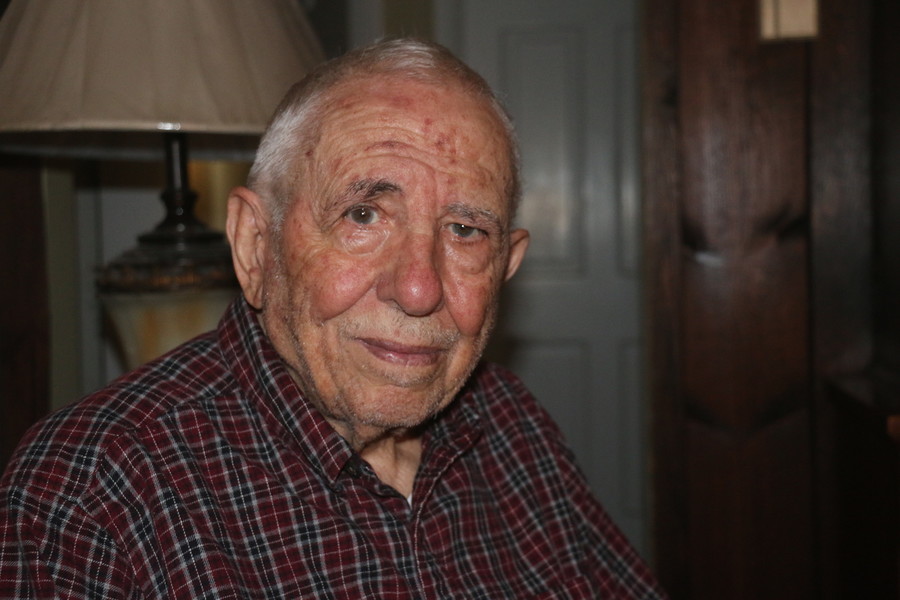 This Monday, 72 years will have passed since Louis Palermo was among the thousands who stormed Omaha Beach on D-Day. He was 18, it was his first combat experience and he was in the middle of the bloodiest sector of the largest amphibious military assault in history.

Palermo was part of the assault’s second wave, following the first that had been decimated by German artillery, mortar and machine gun fire. When the ramp of the Higgins boat he was on dropped open, Palermo plunged into the water. It took him 10 minutes to get to the beach.

“A lot of my comrades got killed,” Palermo, 90, of Valley Stream, recounted. “The Germans were throwing everything at us.”

Once on the beach, he dug down in the sand. Fire from the bunkers in front of him was too intense for him to get off a shot, as was the case with many soldiers who landed at Omaha. “I was just laying there,” Palermo said, “hoping that a bullet wouldn’t go through me.”

He lay like that for an hour, praying. Then he heard the order to move up. American artillery had been established on the beachhead, and heavy fire was being directed at the German bunkers. Several small groups of riflemen and Army Rangers had fought their way through the German defenses since the first wave had landed. By the time Omaha Beach was under Allied control, 2,500 soldiers lay dead in the surf and on the sand, and about 1,000 more were wounded.

“We knew that once we were established, the war would be ended,” Palermo said.

He remained with the Allied forces after they gained control of the beaches and bluffs and as they pushed across France toward Germany, living in foxholes. Six months after surviving the chaos of Normandy, Palermo was at the Battle of the Bulge. He was grazed by shrapnel from a German artillery shell near his shoulder blade during the fighting, and was patched up and sent back to his post.

Palermo had another close call during fighting in Germany, when a friend was shot in the head by a sniper. He lay flat on the ground to evade the shooter’s sight and survived.

At one point during the U.S. Army’s push, Palermo was separated from his unit. He caught up a week later, but not before the Army sent a letter to his mother saying he was missing. He had sent one of his own, which she got shortly afterward, to her confusion and relief.

After the war, Palermo returned home to Brooklyn. He married in 1958, and he and his wife, Norma, had two children, John and Joan. They now have four grandchildren.

As he recalled his wartime experiences in the front room of their home on Sunset Road, Norma walked into the room and sat down. “This is the most I’ve ever heard about it,” she said.

Since they moved to Valley Stream 40 years ago, Palermo has been a commander of the American Legion Post in Franklin Square and of the Valley Stream VFW Post. He is a member of Disabled American Veterans, and has also been active with the Knights of Columbus, the Long Island Society of Italian-Americans and Holy Name of Mary church.

Palermo’s memories of events nearly three-quarters of a century ago left him with a deep appreciation for the liberties he was able to come home to, as well as a simple wish. “I just hope we don’t get into another war,” he said. “I don’t want to see the younger generations go into combat anymore.”

If it were up to him, he said, stores would be closed on Memorial Day and a national moment of silence would be observed. “The heroes are the guys that got killed over there, that are buried,” he said. “They sacrificed their lives.”