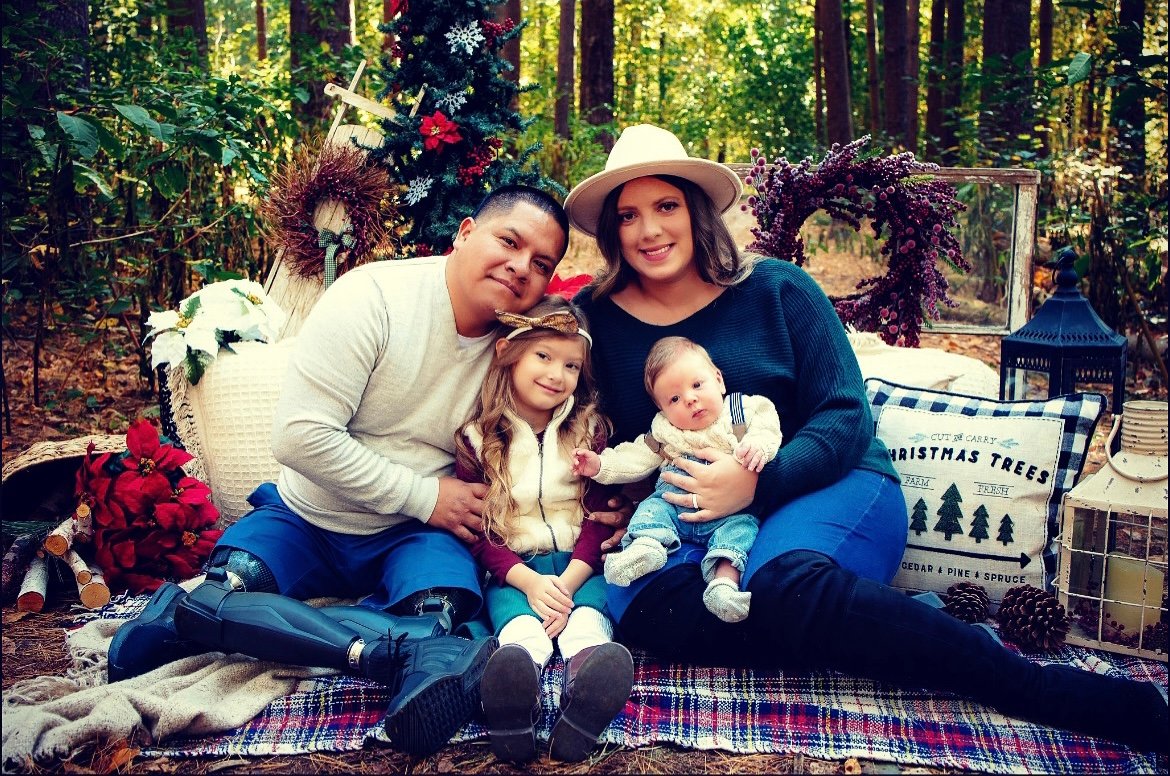 Luis Remache, his wife, Cynthia, and their children, Katherine, 5, and Benjamin, 2 months. The couple met while Luis was recovering in the hospital from injuries sustained in combat, including the loss of both of his legs. The Long Beach Waterfront Warriors are now honoring them.
Courtesy Remache family
By James Bernstein

In the summer of 2011, with the U.S. involvement in Afghanistan growing, Luis Remache was a young Marine whose unit came under attack in the war-torn country. When several improvised explosive devices were tossed over a wall, Remache lost both his legs above the knee, two fingers on his right hand and one on his left, and suffered lacerations to his chest.

He was immediately shipped to Walter Reed National Military Medical Center in Bethesda, Md., where he was in a coma.

Remache, now 36, not only survived, but also met the woman he would marry two years later. Then also a Marine, the now Cynthia Remache was serving in an administrative capacity at the hospital.

The Remaches and their two children, Katherine, 5, and Benjamin, 2 months, will be among 38 people — 12 of them wounded veterans — who will be hosted this weekend by the Long Beach Waterfront Warriors, Jerry Snell, the organization’s president, said.

On Saturday, the group will be bused to New York City to check out the Christmas tree at Rockefeller Center and later be escorted to a firehouse, Engine 54, Ladder 4 on West 48th Street. There will be lunch at the firehouse and a welcome by Ken Cerreta, the Fire Department of New York’s retired citywide tour commander.

On Sunday, they will visit the main Point Lookout-Lido Fire Department station and receive a welcome by Chief James Guerin, who said the department has hosted a Christmas party for veterans and their families for the last 10 years.

“We have a blast doing it,” he said. He began honoring veterans when he was a lifeguard in Long Beach.

Veterans and their families will receive a ride through the community and a party at the firehouse.

The Long Beach Waterfront Warriors host wounded veterans during the summer and the winter, Snell said.

Today, Luis Remache is working toward his master’s degree in security computer information, and he and his family live in Manorville, in eastern Suffolk County. Cynthia Remache is a stay-at-home mother. Remache was not immediately available for comment.

Remache’s recovery was a long and difficult one. He had served in Iraq twice and once in Afghanistan, where he was wounded by the IED on June 29, 2011. He lost one leg in Afghanistan and the other at a military hospital in Germany.

When he was shipped to Walter Reed with the rank of sergeant, his future wife was working there as an administrative liaison, helping the wounded and their families with the documents needed for their treatment and what they were entitled to. She was a Marine corporal.

“He was the first person I ever saw in that shape,” she said earlier this week. “The medevac team tells you what you can expect so you don’t freak out, but when I first saw him, I was still shocked.”

“He was unconscious,” Cynthia said. “There were just the sucking sounds of a machine that was pumping blood into him.”

She was overseeing the documents for his parents and his brother, also a Marine. But the two had little contact until Remache became an outpatient in September 2011. Remache needed assistance with retrieving his clothes and other items from a Marine base in California, where he had been stationed before he headed out to Afghanistan. He was born in Ecuador and came to Manhattan with his family when he was 9. His wife is from Kentucky.

“He was a big clown,” Cynthia said, adding that he liked to joke around with her and the administrative staff. “I think my personality came through,” Cynthia said, explaining how the two conversed.

“I saw a lot of Marines with prosthetics,” she said. “I said to him, ‘You’re still in a wheelchair.’ His supervisor said, ‘Keep after him.’”

Not long after, Cynthia said, she was walking outside the hospital when she felt a tug on her dress. She turned around and saw Remache in a pair of shorts, talking about prosthetics and eventually using them to help him walk.

They became close friends, but the friendship turned deeper in November 2011, when they met, by accident, at a U.S. Marine ball in Bethesda. They had each come alone.

“He looked kind of down and out,” Cynthia said. “He was in his wheelchair. I got him out on the dance floor. He used to like to dance. He had so much fun. He danced with everybody.”

Their wedding was in Bethesda, on July 30, 2013, the day after Luis retired from the Marines. In 2018, the couple married again in Queens. Jerry Snell and his wife, Collen, were godparents.