Was Cedarhurst’s mayor for nearly 20 years 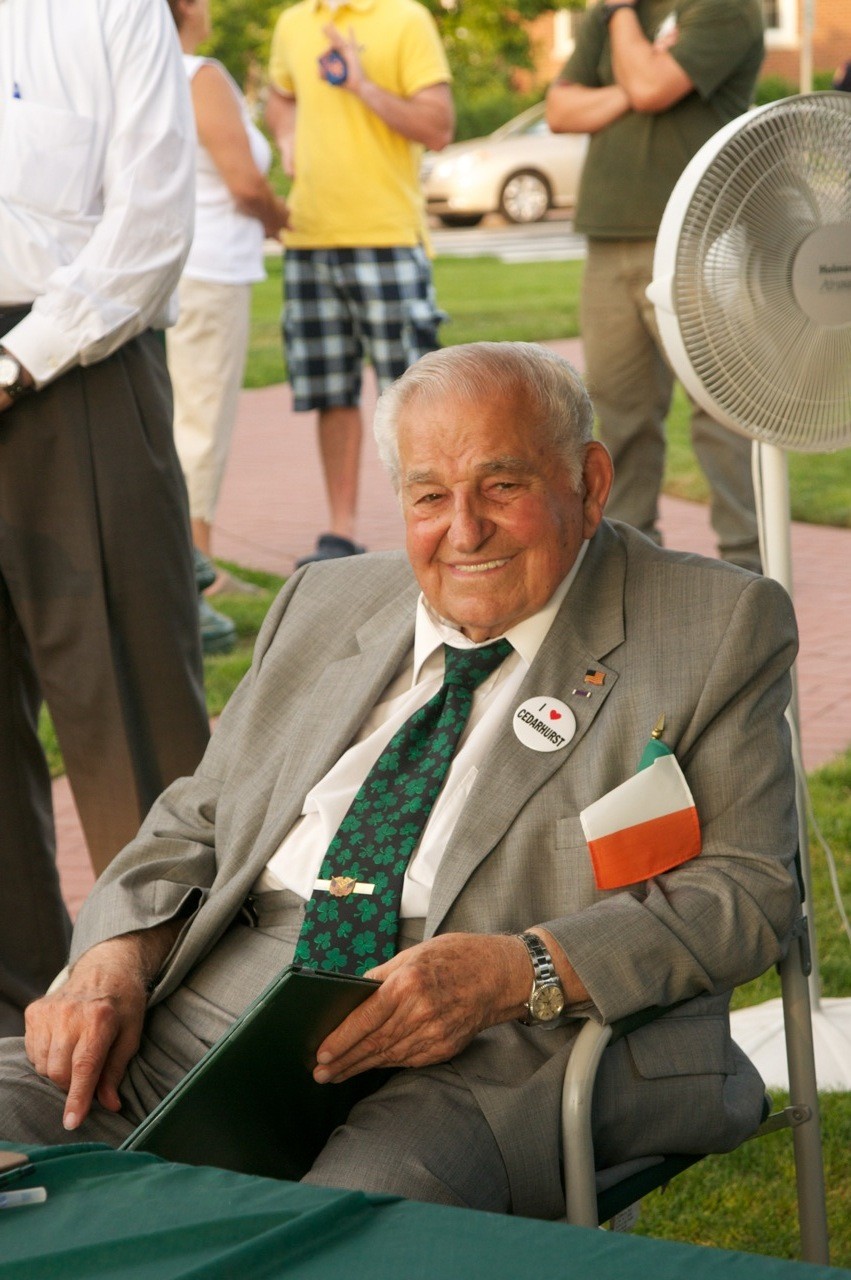 Five Towns native and longtime Cedarhurst board trustee Andrew J. Parise was the village’s mayor for nearly 20 years. Parise attended a concert at the park that is named for him in July 2012.
Penny Frondelli/Herald 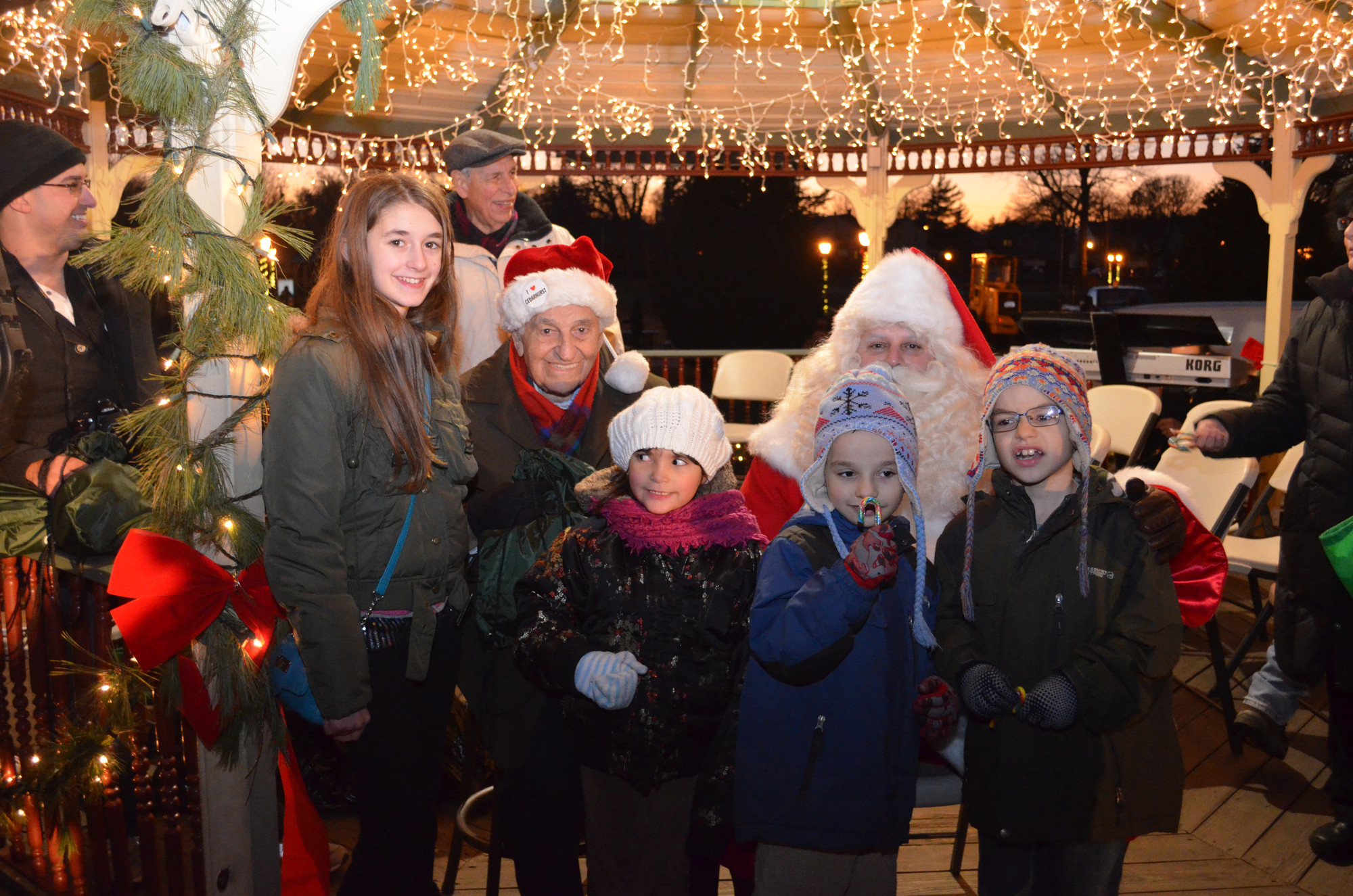 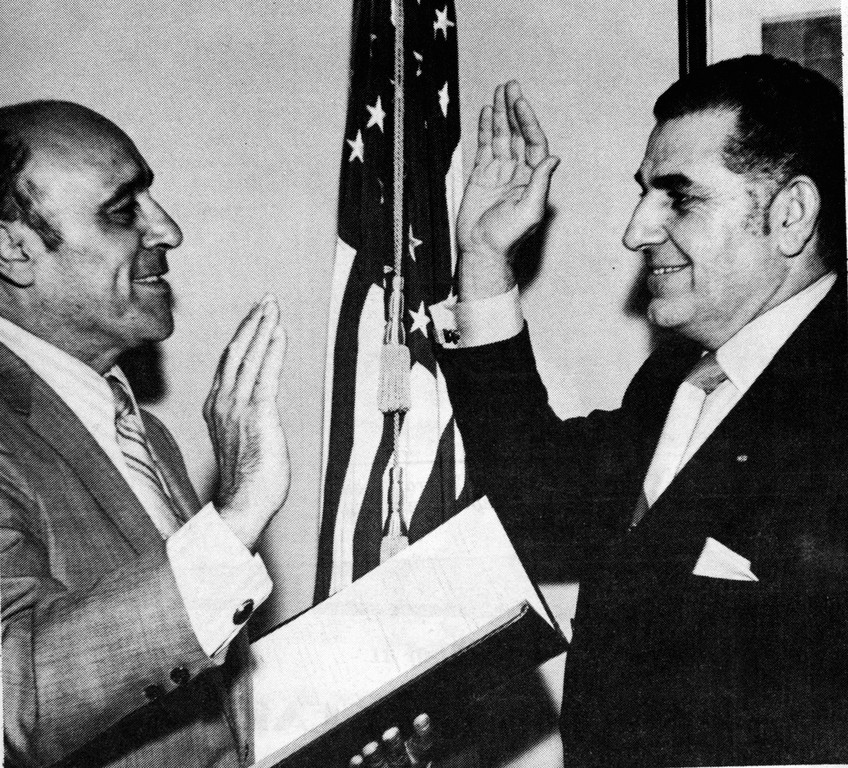 Longtime Cedarhurst mayor and lifetime Five Towns resident Andrew J. Parise died last Sunday, at age 90.
Parise was a public servant for more than 60 years. In 1954, he was a legislative aide to the New York State Assembly. Two years later, he began a 40-year career with the Town of Hempstead, where he worked as the chief of staff for seven supervisors.
In 1958, Parise established the first purchasing department for any town in New York, and served as its first director. He also founded Hempstead’s Employees Federal Credit Union. “I like people, and I like doing things,” he said in an interview with the Herald in 2011, when he was running for re-election for mayor, explaining why he took the town job.
Since 1971, Parise had been on the Cedarhurst village board. He served as deputy mayor under the late Nicholas Farina, and became mayor in 1995.
From the “CEDMAYOR” license plate on his Lincoln Town Car to being in his office during emergencies such as Hurricane Sandy, Parise loved Cedarhurst, and loved being mayor.


During that 2011 interview, he said this, referring to a former county executive, when asked why people should vote for him: “Tom Suozzi said I was the first village mayor he found in his office.”
He had an open-door policy, inviting residents to speak with him directly about problems, and he worked hard to help ensure that vacancies in the village’s business district were kept to a minimum. In 2013 that rate was 5 percent, the lowest since 2006. “We like retail,” Parise said of the high occupancy rate, noting the village’s efforts, along with the Cedarhurst Business Improvement District, to keep it that way.
County Legislator Howard Kopel, a Republican from Lawrence, said he believes Parise was largely responsible for what Kopel called the “high quality of life” enjoyed by village residents and the many customers who flocked to the businesses on Central and Cedarhurst avenues.
“As the mayor of Cedarhurst for the past two decades, Mayor Parise’s unwavering leadership was evident in the fact that he could be found behind his desk in his Cedarhurst village hall office virtually every day,” Kopel said.

Early life
Parise grew up in Inwood, one of six siblings. He walked to the Number Four School at a time when not many of the roads were paved and there were three horse stables in the area, one of them on Peninsula Boulevard.
The 1942 Lawrence High School graduate enlisted in the U.S. Army and was assigned to the 87th Infantry Division 312 Combat Engineers from February 1943 to December 1945. He fought in the Battle of the Bulge and in France, Belgium and Luxembourg. His unit also entered the Buchenwald concentration camp, an experience that created an indelible memory.
When Parise’s unit got to the camp, only corpses had been left behind. “Eisenhower came out with an order — every soldier had to visit the camps to witness what went on there so there would be no question there was a Holocaust,” Parise told the Jewish Star in 2010. “It was horrific.”
Hit in the knee by sniper fire in Czechoslovakia, he earned a Purple Heart the day before victory was declared in Europe in ’45.
“Mayor Parise was a true American hero and an ideal leader of the community,” said Gary Schall, superintendent of the Lawrence School District. “He has been a role model for me personally and made everyone feel like a member of his family.”
Hempstead Town Councilman Bruce Blakeman said he appreciated Parise’s dedication to public service, his wisdom and the fact that he fought in World War II, like Blakeman’s father. “Andy radiated a love for all people and a rock-solid commitment to government,” Blakeman said. “I will miss Andy’s smile, kind words and sage advice. He was a true gentleman, a strong leader and a quintessential American patriot.”

Family life
Parise married his childhood sweetheart, Lillian Oliviero, in 1945. They were married for 49 years, and had three children, Andrew Jr., Louise and David. Lillian died in 1994.
As much as “CEDMAYOR” was his public persona, Parise’s handle at home could have been “Handy Andy,” according to David, who said his father owned a hardware store in Inwood before going into government.
“He was very handy, and always had little projects. He built a boat with my brother and we built go-karts,” said David, who recounted how, despite the time away from home that his father’s job demanded, he was there for the family. “He always had time for us — family vacations, summer places in Pennsylvania, the Catskills and Monticello. When there were special events, such as the World’s Fair, we were all included. He instilled in us that family was very important, and even the ex-wives are included in the extended family.”
Kristen Jones, Parise’s eldest granddaughter, called her grandfather a “lion of a man” who had a soft spot for children but disciplined them when needed. “Up in Monticello we had these golf carts, and he would let us ride them, but you never wanted to tell Pop you broke a golf cart,” Kristen recalled. “I used to roller skate across the hardwood floors — I was 7, 8 and 9. I would pretend I was a waitress and he would give me a tip.”

Honoring the mayor
In 2011, Cedarhurst Park was renamed Andrew J. Parise Cedarhurst Park. Its namesake, aided by several local organizations, refurbished the park, creating a water park as well as the memorial area, and built a baseball field. His administration, in partnership with local businesses, established the summer concert series in the park’s gazebo.
“He will be most remembered by the National Council of Jewish Women, Peninsula Section, for providing a location and partnership between our organization and the Village of Cedarhurst that enabled us to build a fully accessible playground for the community,” NCJW co-presidents Bonnie Sperry and Laurie Stone Brodsky wrote in an email. “We are also grateful for the mayor’s support of women’s and girls’ rights. Most recently his role in issuing a proclamation from the village recognizing the International Day of the Girl.”
Five Towns Community Chest Executive Director Bob Block said that after working with Parise on many charitable and public events, he came to understand why the mayor garnered the respect he did, from members of the clergy to business people to elected officials.
“The village trustees were spot-on when they decided to rename the park after the man responsible for its beauty and vivacious community spirit,” Block said. “May he rest in peace with the knowledge that he has made a difference in this world and that his name and fond memories will endure in our hearts forever.”
Hempstead Town Councilman Anthony Santino knew Parise for more than 40 years and, like Schall, called him an American hero. “He was a giant of a man who was beloved by his village and by the thousands of friends and colleagues whose lives he touched so deeply through countless acts of caring, generosity and kindness,” Santino said. “Sadly, he leaves a void in our hearts and in our community that can never be replaced.”
“He was the most caring, thoughtful person,” said Jo Marie Capone, the mayor’s assistant for nearly 20 years. He loved Cedarhurst. He loved his family. You couldn’t find a better man.”
Village Administrator Sal Evola said that Deputy Mayor Ben Weinstock is now Cedarhurst’s acting mayor. The mayor’s four-year term expires this year, and the candidate petition deadline was Tuesday. The village election is set for March 18.
“The mayor was the most wonderful man you could know, a fantastic leader,” said Evola, a village employee for more than 12 years. “I will miss him very much. He was a gentleman in every respect.”
In addition to his children, Parise is survived by 10 grandchildren and five great-grandchildren. A wake was scheduled for Wednesday and Thursday at Perry’s Funeral Home in Lynbrook, from 2 to 4 p.m. and 7 to 9 p.m. A funeral Mass was scheduled for Friday at 10 a.m. at St. Joachim R.C. Church, at 614 Central Ave. in Cedarhurst, with burial to follow at Greenfield Cemetery in Uniondale.
Report an inappropriate comment