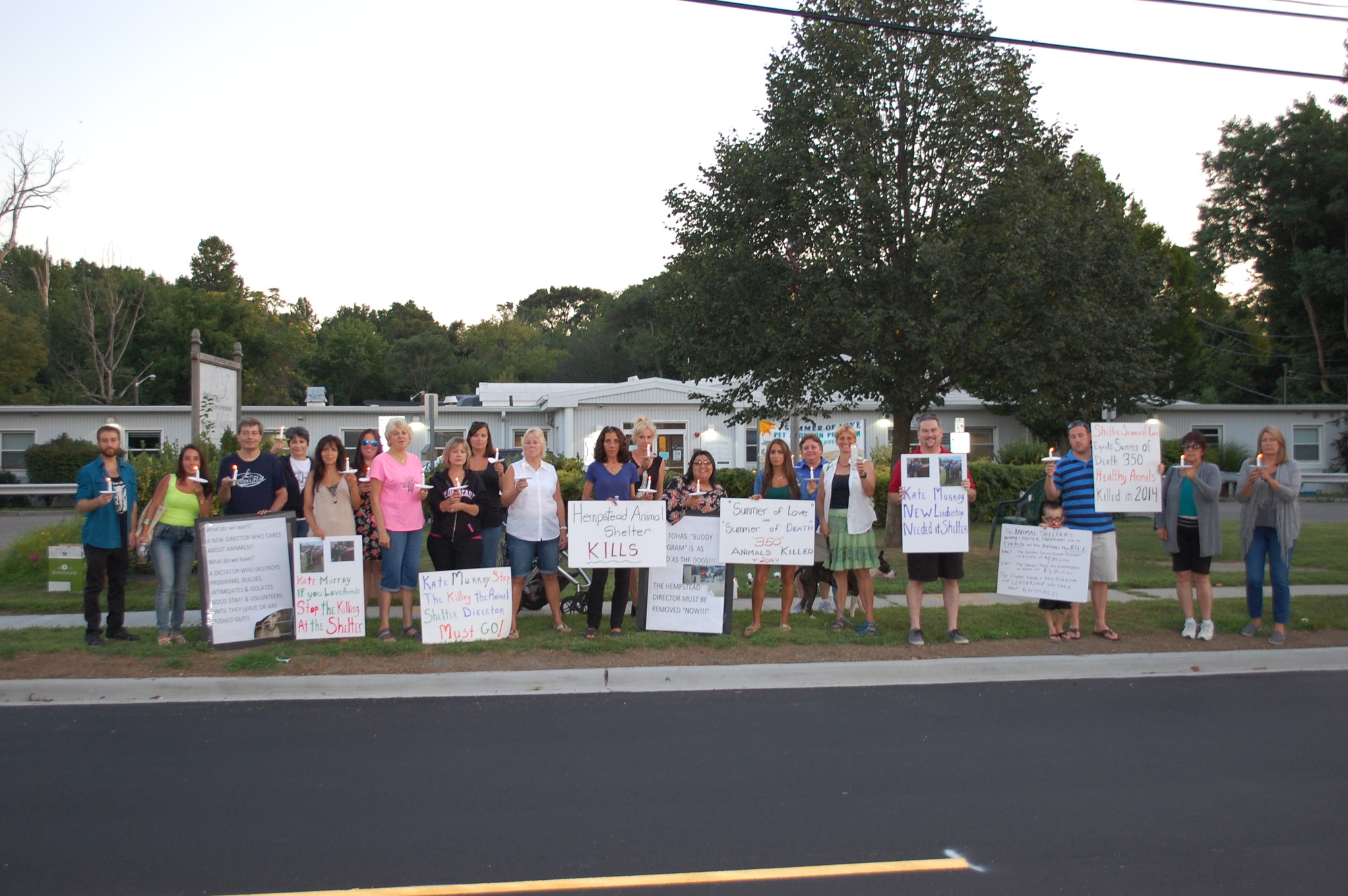 A group of animal activists gathered outside of the Town of Hempstead Animal Shelter in Wantagh on Aug. 26 calling for a change in leadership.
Andrew Hackmack/Herald
By Andrew Hackmack

A group of animal activists gathered outside the Town of Hempstead’s Animal Shelter in Wantagh last week calling for a change in leadership, and saying that policies are resulting in the deaths of healthy animals.

Town officials respond that the euthanization of animals has dropped in recent years, and that other claims are baseless.

A group of about 20 people stood along Beltagh Avenue the evening of Aug. 26 holding signs and candles. They held a vigil for all animals they say have needlessly died at the shelter in the last year.

The activists were particularly critical of shelter Director Michael Pastore, who took over last June. Diane Madden, a long-time critic of operations at the shelter, said that under his leadership the place has turned into a “kill facility.”

“That is the mentality here at Hempstead,” she said. “We’re here basically to memorialize these animals that died senselessly and silently.”

Town of Hempstead spokeswoman Susan Trenkle-Pokalsky said that many of the animals put down are at the owner’s request because their pet is sick. She said that town residents can bring an animal to the shelter to be euthanized instead of a private veterinarian, which costs more. “We’re a municipal shelter,” she said. “We have to take all animals. Very often, those animals are sick.”

Lucille DeFina, another animal activist, said that for a while, the town shelter truly felt like an adoption center, but now she feels the mentality has changed. “Now, it’s back to animal control,” she said. “You’re supposed to have people in there who are trying to save lives.”

Madden said that the shelter had been moving in the right direction, with great programs to foster adoptions, but feels that has changed since Pastore came on as director. She said last week’s vigil was an attempt to encourage Supervisor Kate Murray to make a change in leadership at the shelter.

The vigil was held on a Wednesday night, she explained, because that was when the shelter used to hold its buddy program. That matched up dogs to volunteers, and those volunteers served as advocates to get those animals adopted.

Trenkle-Pokalsky said the program continues and has been moved to Saturdays in an attempt to increase participation. She said it is held every other Saturday right now, but is expected to become weekly.

Trenkle-Pokalsky also said that the Foster Care program continues to thrive, with 264 animals having entered the program to date this year. She also said that of the 627 pets that went into foster care last year, 436 were from June to December, when Pastore was director.

Kay Bott, a former volunteer and employee, said she supports a change in management. She says she was fired for voicing concerns about sanitary conditions.

Lillian Lennon, of RSVP Inc., an animal welfare and rescue group in Suffolk, said that she was at last week’s vigil to support her fellow activists, and to encourage shelter officials to reach out to rescue groups, no matter how close or far away. “Animal advocates tend to stick together,” she said. “We try to take care of our own. It’s our Long Island animals that we’re trying to advocate for.”

Lennon added that she would like the shelter staff to contact her, so her group can try to find homes for its animals. “You have to be very proactive in rescue,” she said, “because the public is not going to come to you unless you reach out to them.”