Aviators take on the Misfits 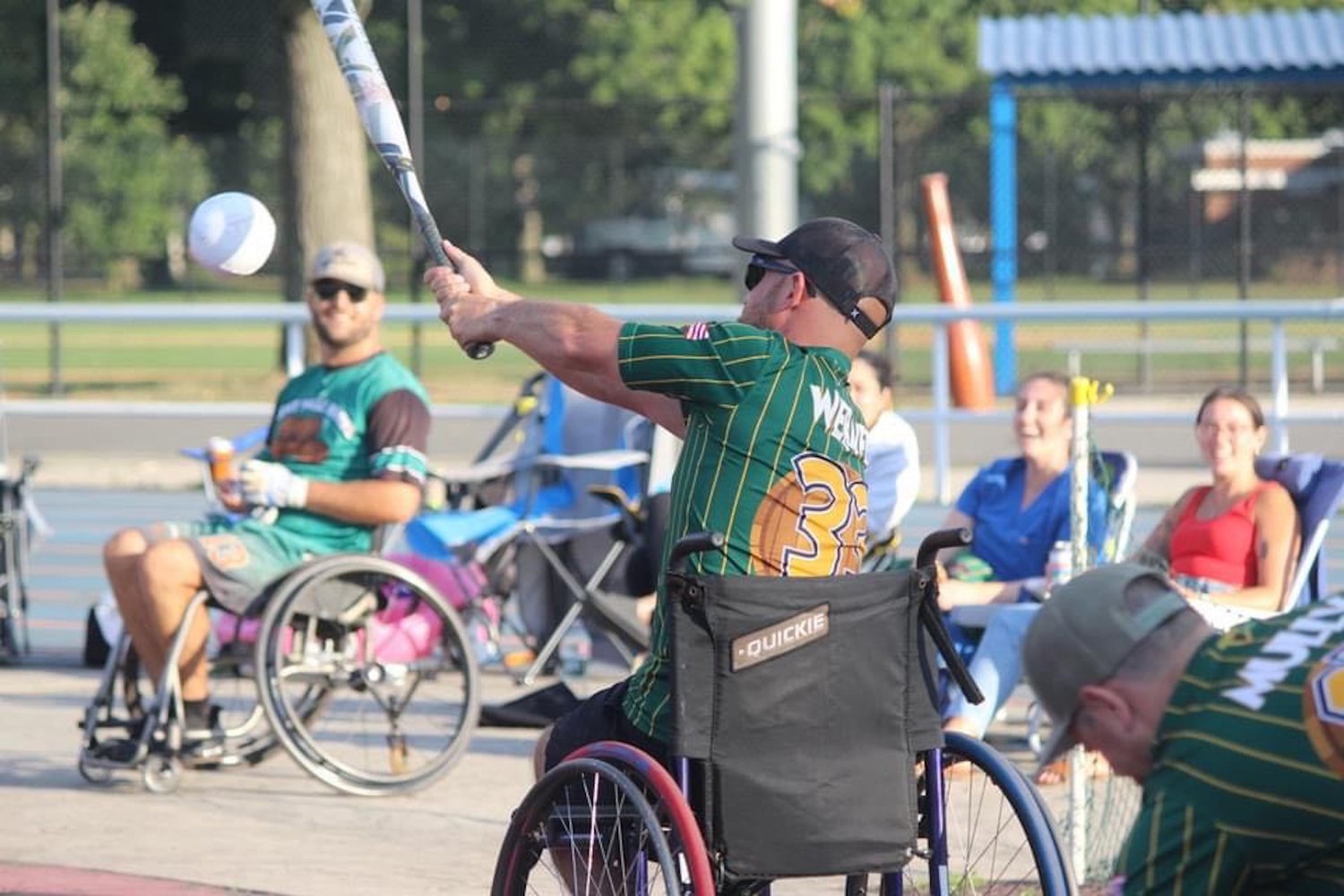 Ray Werner, of Jeremy’s Misfits, took a turn at bat during the annual game on Aug. 18.
Melissa Scopelitis
By Mohamed Farghaly

When the Aviators of Nassau County wheelchair softball team faced off against Freeport’s Jeremy’s Misfits in their annual exhibition wheelchair softball game at Eisenhower Park in East Meadow, the final score was far from the most important aspect of the game.

The result of the Aug. 18 game was a pair of teams enjoying a great game while showcasing sportsmanship and community spirit. The Aviators showed that disabilities don’t slow them down, coming out on top, 14-4. Jeremy’s Misfits have defeated the Aviators just once in the last five years.

The Aviators of Nassau County wheelchair softball team was founded by Anthony Fitzgerald in 2003. Its purpose is to create, promote and expand opportunities for people with physical impairments.

The organization has become involved in sports and recreational activities around Nassau County, with the purpose of improving the health and general quality of life of the disabled community.

Fitzgerald discovered his love for wheelchair softball when he won the championship playing on the Mets team. After hoisting that trophy, he wanted to spread his passion for it to the people in his community.

He knew there were those with disabilities just sitting at home when they could be outside experiencing sports and the outdoors just like everyone else.

“There were a lot of disabled people who were at home on their couch when they should be outdoors having fun, especially in the summer playing America’s great pastime with the rest of the community,” Fitzgerald said.

The team’s proclaimed motto is “Can you beat the Aviators?” issuing the challenge to any sports team whether they are disabled or able bodied and competing in wheelchairs.

The team’s name stems from the part Long Island and its aviation industry played in World War II.

“We just wanted to pay tribute to the contribution to the World War II effort through the aviation industry on Long Island,” Fitzgerald said. “The pilots, the Grumman Republic, those are all big airplane manufacturers. They made the planes that are on our jersey, which is the F-6 Grumman Hellcat.”

Aviators President Drew Scopelitis said the players on the roster have an array of disabilities, but very little slows them down.

“It’s players from all over, we try to include all disability types,” Scopelitis said. “We have everybody from folks who are literally quadriplegics. We have a few quad players on our team, guys who are basically amputees. I myself have spinal bifida. We have several guys who were injured in spinal cord injuries from various accidents that they had in their lives. So, this is just a place where we come together and just participate in something fun.”

The Jeremy’s Misfits softball team is comprised of able bodied players based in Freeport sponsored by Jeremy’s Ale House, a restaurant and tavern on the Nautical Mile.

Every year, Jeremy’s Misfits and the Nassau Aviators engage in a match that showcases both sportsmanship and the spirit of the community.

Manager of the Jeremys’ Misfits, Leonardo Rodriguez said the annual game came about when the Scopelitis was at Jeremy’s Ale House when the Misfits came in after a game for drinks and camaraderie.

“He goes, would you like to do an exhibition game with us?” Rodriguez said. “He told me who they were. And I was like, that sounds great. We went back and forth for a while and eventually we made it happen. Now we’ve been doing it for almost five years now.

Players from Jeremy’s Misfits take their customary positions on the field, but when they face the Aviators, they are in wheelchairs to balance the playing field.

“It’s not about us, it’s more about being there and enjoying the game,” Rodriguez said.

“We hang out and barbecue after, have a few drinks and we just like talking to these guys. They’re such good people. They’re veterans, first responders. There’s a lot of really good people there and it’s a good atmosphere to be around.”

After competing in Eisenhower Park for five years, the teams hope to host a game during the Freeport annual festival in the future. The pandemic became a hurdle, making organizing this matchup difficult.

The teams are still optimistic that with proper organization and outreach to the community, the game could become an annual Freeport festival tradition.