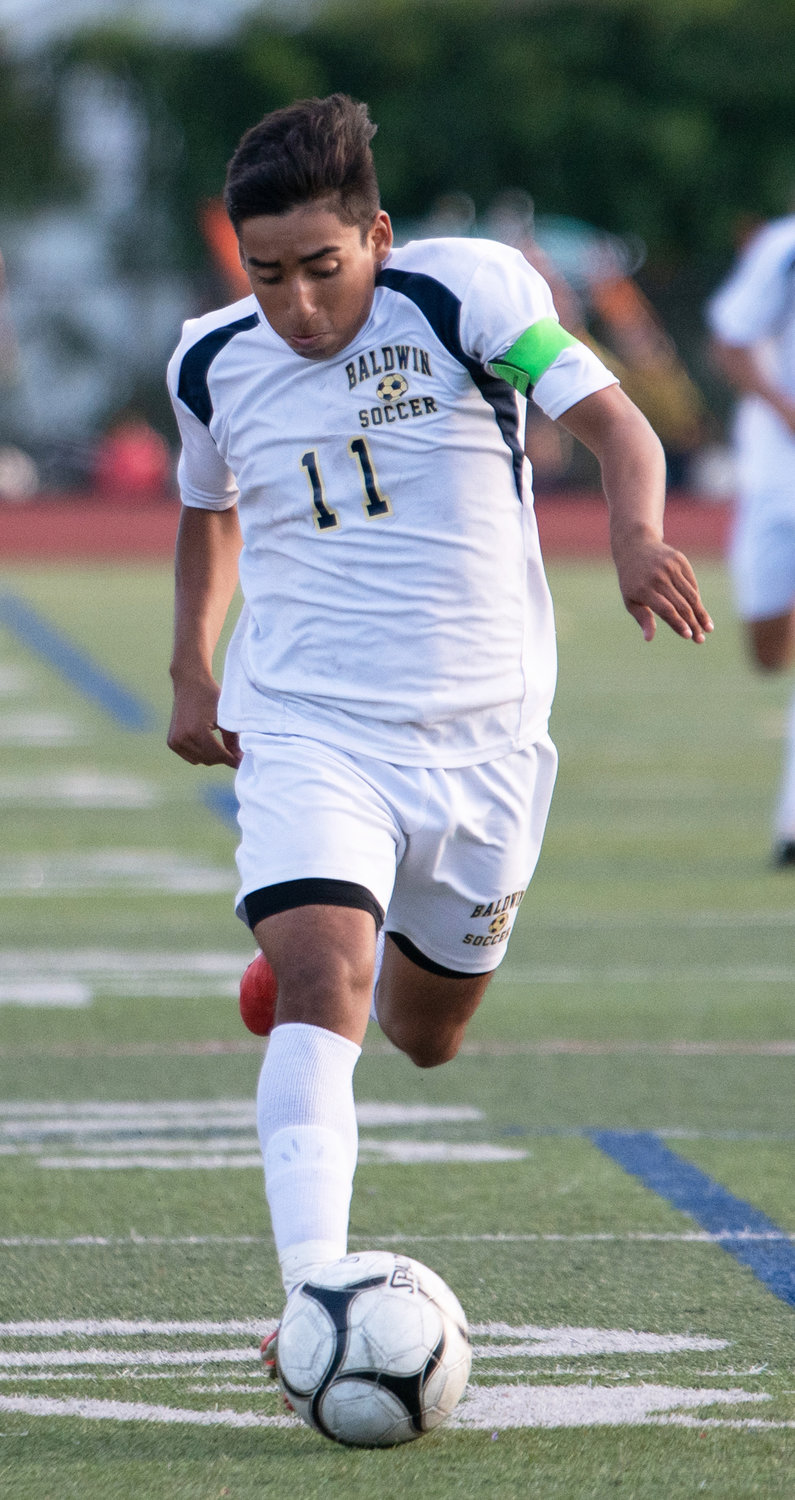 Sophomore William Zalaya has been the spark for Baldwin's offense and leads the team in goals with seven, including the winner at Hicksville on Oct. 11.
Media Origin Inc./Herald
By Andrew Coen

The Baldwin boys’ soccer program has raised its game to new heights this fall after a turnaround spring season led by a senior-led group.
After a season-opening loss to Freeport, the Bruins (9-1-4) went unbeaten for 13 straight matches culminating in a 1-0 win against Farmingdale last Thursday on a second half goal from senior Shelroy Young that clinched the Conference AA1 title.  Baldwin will enter the Class A playoffs as a one seed just two years after a winless 2019 campaign.
“Two years ago we didn’t have a ton of seniors with experience and I think having those players who have gone through things and are set to be in those leadership roles makes a big difference,” said Baldwin coach Chris Soupios of his team’s strides this fall after going 4-3-3 in the delayed 2020 season played in the spring due to the pandemic. “This team believes in themselves.”
Baldwin’s experienced senior class includes fourth-year varsity players Luis Ascenio (wingback), Anthony Ramos (midfielder) and Ashel Santos (wingback), who have been keys on the defensive side of the field. Young, a senior newcomer has also been an integral part of the backline after moving to the Baldwin School District during the pandemic.
Sophomore Josue Ascenio, a younger brother of Luis, has shined during his season as starting goalie recording six shutouts during the regular season.


“He is incredibly athletic and has great reflexes,” Soupios said. “Every other game he makes one of these saves where you were sure the ball was going in the net.”
The offense has gotten plenty of spark from sophomore William Zelaya, a reigning Honorable Mention All County striker who has struck for seven goals this season including a late-game winner in a 1-0 win at Hicksville on Oct. 11. Zelaya, who was voted captain this season, also netted the eventual game-winning goal in a 2-1 victory at Oceanside on Sept. 11.
Junior midfielder Justin Jean-Louis has registered four points on a goal and three assists. Fellow juniors Kwame Souffraint (midfielder) and Andres Moreno (center back) have also been big focal points of a versatile Bruins offense that has had nine different goal scorers.
On offense, Baldwin brings back Honorable Mention All-County striker William Zelaya, a sophomore who will look to collaborate with fellow second-year starter Justin Jean-Louis, an All-Conference midfielder
Baldwin’s first-round playoff opponent was unknown as of press time and will hinge on the results of a play-in-game slated for early this week. Whoever the Bruins confront in the quarterfinal round on Oct. 27, Soupios sees potential for a deep playoff run that could culminate with a county title.
“The goal at the beginning of the season is to get better very game and get into the playoffs and when in the playoffs the goal is to win a county championship,” Soupios said. “That is the goal we set at the beginning of the season and it’s the goal we still think we have a good shot at reaching.”