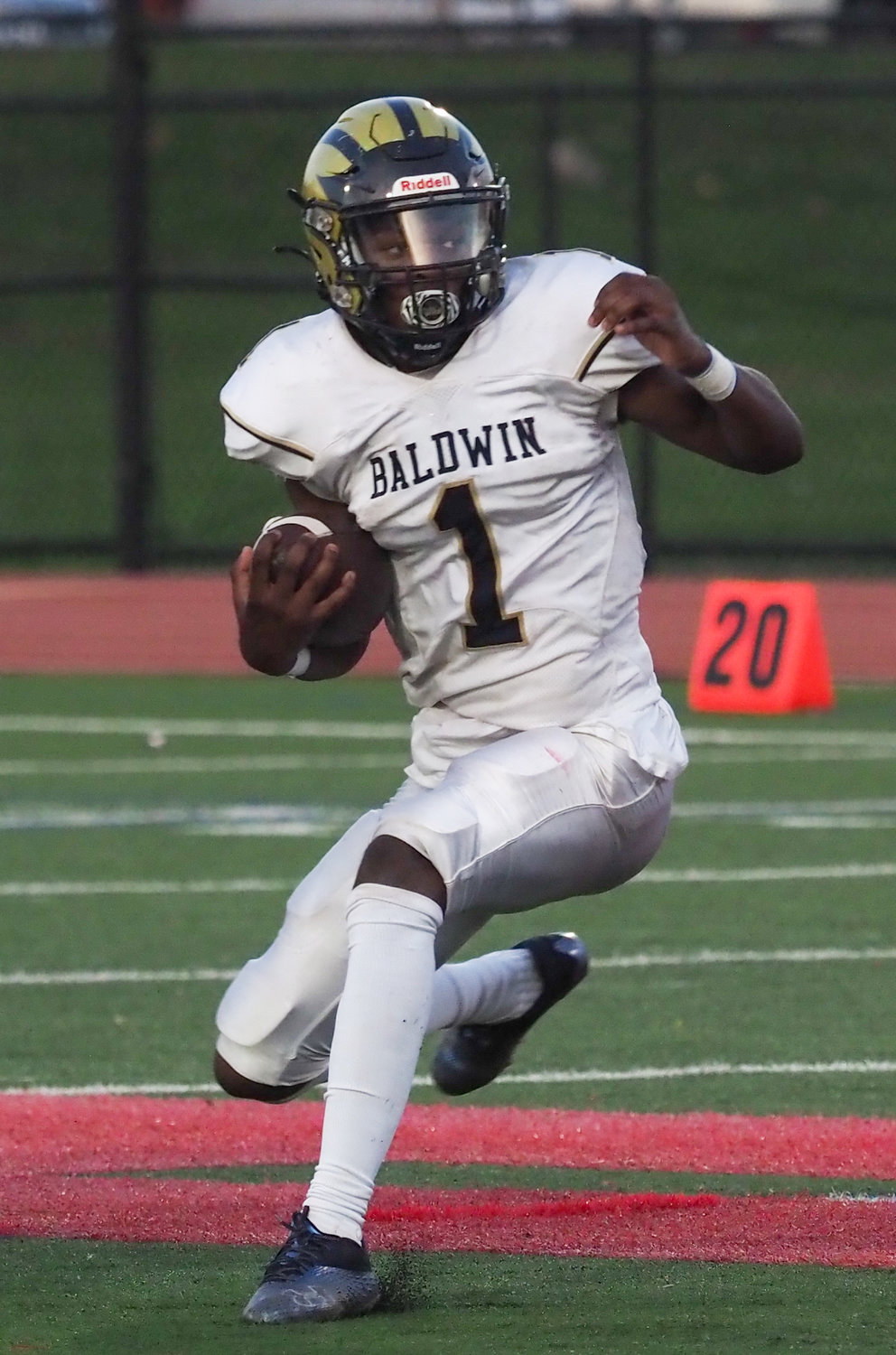 The No. 9 preseason seed in Nassau Conference I football, Baldwin fell about a yard short of reaching the county championship game.

The Bruins closed within a point of two-time defending champion Massapequa with 1:24 remaining in Saturday night’s semifinal at Hofstra and decided to try for the go-ahead two-point conversion.

Baldwin sophomore quarterback Vaughdrea Johnson, who had a 14-yard touchdown run to narrow a margin that was once 15 down to one, was bottled up by the Chiefs’ defense on the conversion attempt and Massapequa recovered the ensuing on-side kick to hold on for a 21-20 victory.

“It’s our go-to call,” Baldwin head coach Frank Chimienti said of the conversion play. “Power read and Vaughdrea is one of our best athletes. They just made a big defensive play. His knee was down sooner than we thought. About a yard short.”

Massapequa, the No. 2 seed, advanced to face top-seeded and unbeaten Farmingdale in the title game next Saturday at 4 p.m. The last time the Chiefs reached the finals in three consecutive seasons was 1987 through ‘89.

“We’re probably going to analyze things for the next eight months on what we could’ve done differently, but there’s nothing specific I can think of,” Chimienti said. “We went toe-to-toe with them and our kids fought like they did all year. I don’t think anyone had us one play from making the finals.”

The Bruins (7-3) scored on their opening drive on Johnson’s 1-yard touchdown run just 1:25 in, set up by a 64-yard burst by senior Anthony Byron on the first offensive snap of the night. Byron was limited to defense most of the game due to a dehydration issue but still managed a key interception in the fourth quarter to halt a Massapequa drive.

“After the first run, he got a little dehydrated and we decided to just use him on defense,” Chimienti said of Byron. “He had an incredible season. He did everything he could to stay on the field and contribute.”

The Chiefs kept Baldwin off the scoreboard for the next 35 minutes and scored once in the second quarter (Ryan Fountain 50-yard touchdown reception) to lead 7-6 at halftime, and twice in the third quarter courtesy of Michael DeLuca to lead 21-6.

With its season slipping away, Baldwin responded early in the fourth and drove 72 yards on 11 plays to get within a score. Johnson (101 yards rushing) connected with senior Cedric Jean-Pierre on a 23-yard touchdown passing play to cap it and then ran in the two-point conversion to make it 21-14.

The Bruins’ final drive covered 58 yards in five plays. Kicking for the tie and then giving the Chiefs the ball back with well over a minute left didn’t cross Chimienti’s mind, he said.

“We went for it,” Chimienti said. “It’s a heartbreaking loss, but I’m so proud of our guys.”