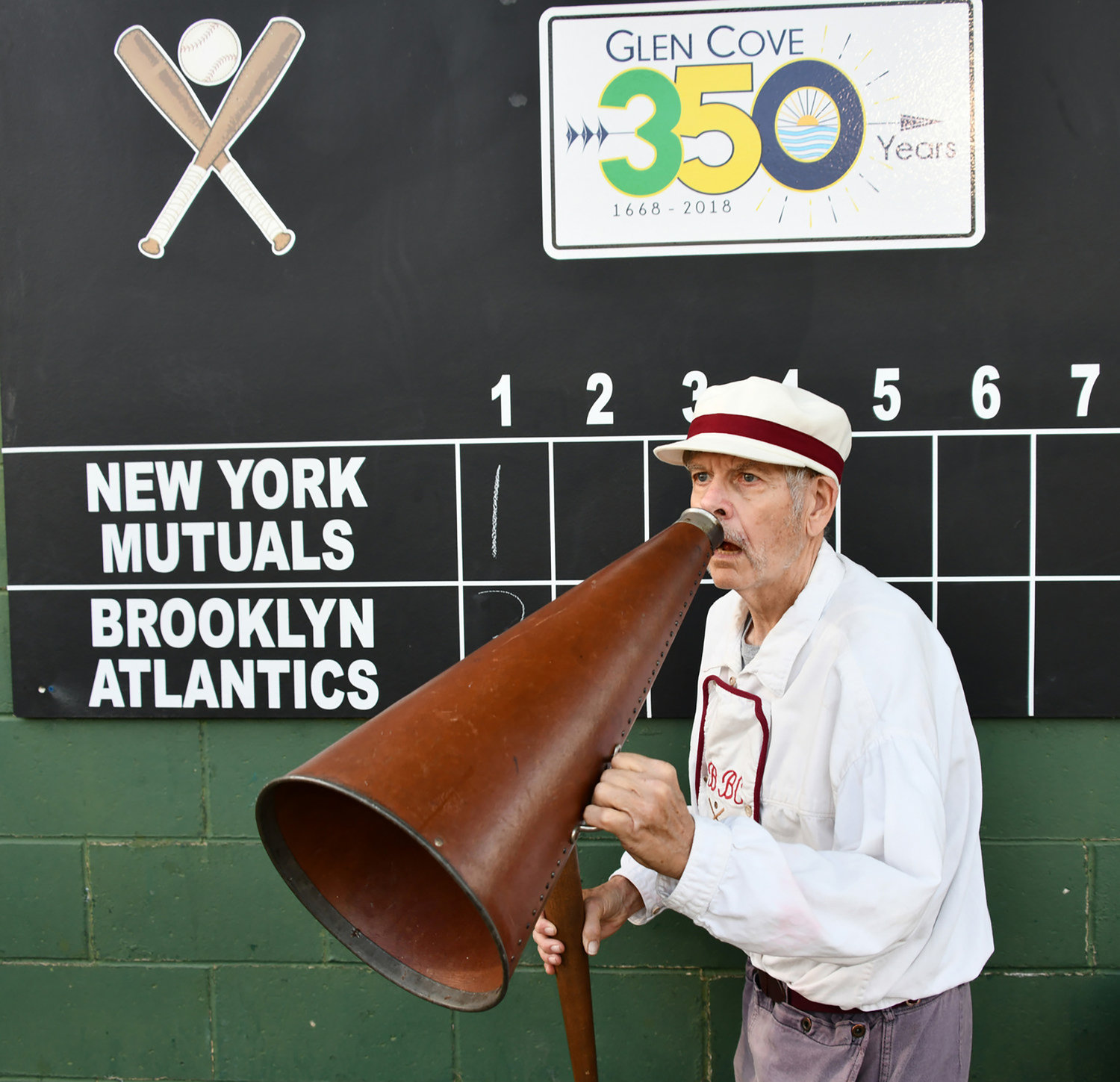 Nicky “the Lip” Tangle helped call the plays at the Old Timers Base Ball Game on in 2018.
Courtesy Tab Hauser
By Will Sheeline

Baseball has dramatically changed in the past 100 years. Back in the 19th century, the game used to be played with minimal equipment. No gloves and lighter bats were the only way to play and it was never played on Sundays in Glen Cove.

“Imagine without any mitts” Eileen Borer, a member on the City of Glen Cove’s Special Events Committee said. “It's just like, wow. This is just like crazy a catcher throwing with no mitts.”

To bring the American sport back to its roots, the Special Events Committee will be hosting its annual vintage baseball game on June 17 at John Maccarone City Stadium Field 1.

The star teams from Old Bethpage Restoration for the upcoming game are the Brooklyn Atlantics and New York Mutuals Baseball Club.

The first vintage game started in 2018, coinciding with Glen Cove’s 350th anniversary. Tina Pemberton, the city clerk who is on the city’s Special Events Committee, said she came up with the idea because she wanted to do something different for the celebration and not a typical baseball game. At the time, the game was called “Old Time.”

Throughout the years, the games have been a homerun for the city. “It was a great success,” Pemberton said. “It's a great family event.”

“It's kind of cute to see how it was,” Borer said.

On the day of the game, hotdogs from The Regency and Cracker Jacks, will be served. There will be baseball tattoos for children as well. Everything, including attendance to the game, will be free. “They're just going to ask for donations,” Pemberton said.

A program will be handed out to tell the history of the game. Back in 1919, Borer said, when baseball was not allowed to be played on a Sunday, the Glen Cove community came together and wrote a letter to the mayor requesting that the rule change.

“We found the actual wording of the letter that they sent to the council,” Borer said. “And then the results [when] the council adopted [it].”

Children will be given a chance to be out on the field to see the balls and meet each of the players, who Pemberton said will come dressed in old-time 1864 uniforms.

“They do a great job with all that,” Pemberton said. “While they’re kind of warming up, they warm up with the kids.”

Keeping with the theme of the 19th Century, there will be a chalk scoreboard for the crowd to keep track of the game. “We try to bring it back to the old days the best we can,” she said.

And the language used at the game will follow what was spoken during the time. “Back in the day, they didn't say like batter up.” Borer said. “It was like striker to the plate.”

Throwing the first pitch at 7 p.m. will be Mayor Pamela Panzenbeck. During the seventh inning stretch, Glen Cove’s Little League teams will be invited out to the field to sing “Take Me Out to the Ballgame.”

“We tried to incorporate as many people as possible,” Pemberton said.

Fans attending are advised to bring their own chairs due to limited seating. “We're hoping that a lot of people will come this time,” Borer said.

The first professional baseball game was played during the Civil War, according to the National Baseball Hall of Fame, as a pastime for soldiers on both sides of the war. Upon returning home from the war, many brought the sport back home and unified their towns.