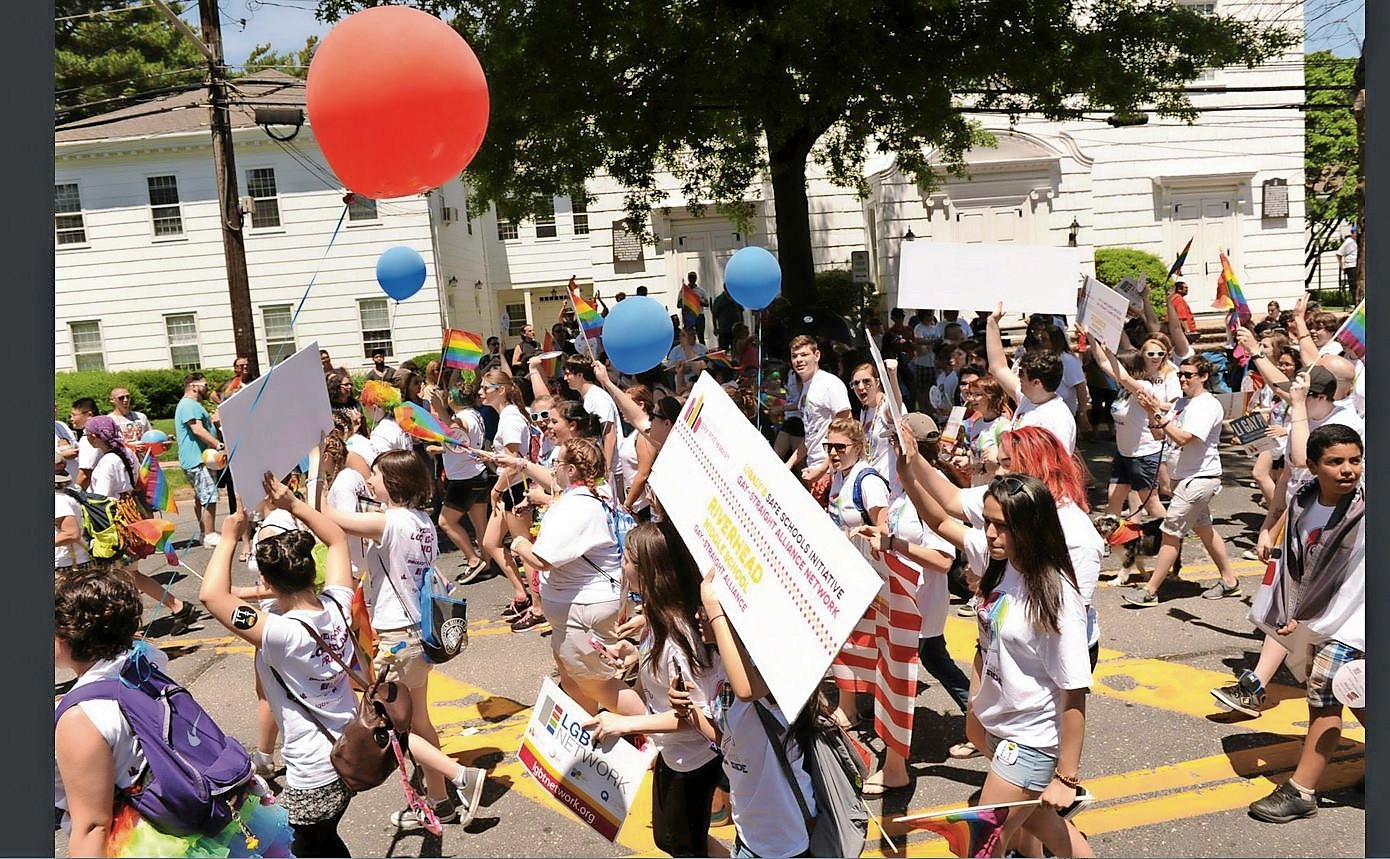 a scene from the 2015 parade in Huntington. The parade on June 11 begins on Broadway and Laurelton Boulevard, proceeds east on Broadway to National Boulevard, then heads north to Park Avenue, east to Long Beach Boulevard and south again to the boardwalk.
Courtesy LGBT Network/Facebook 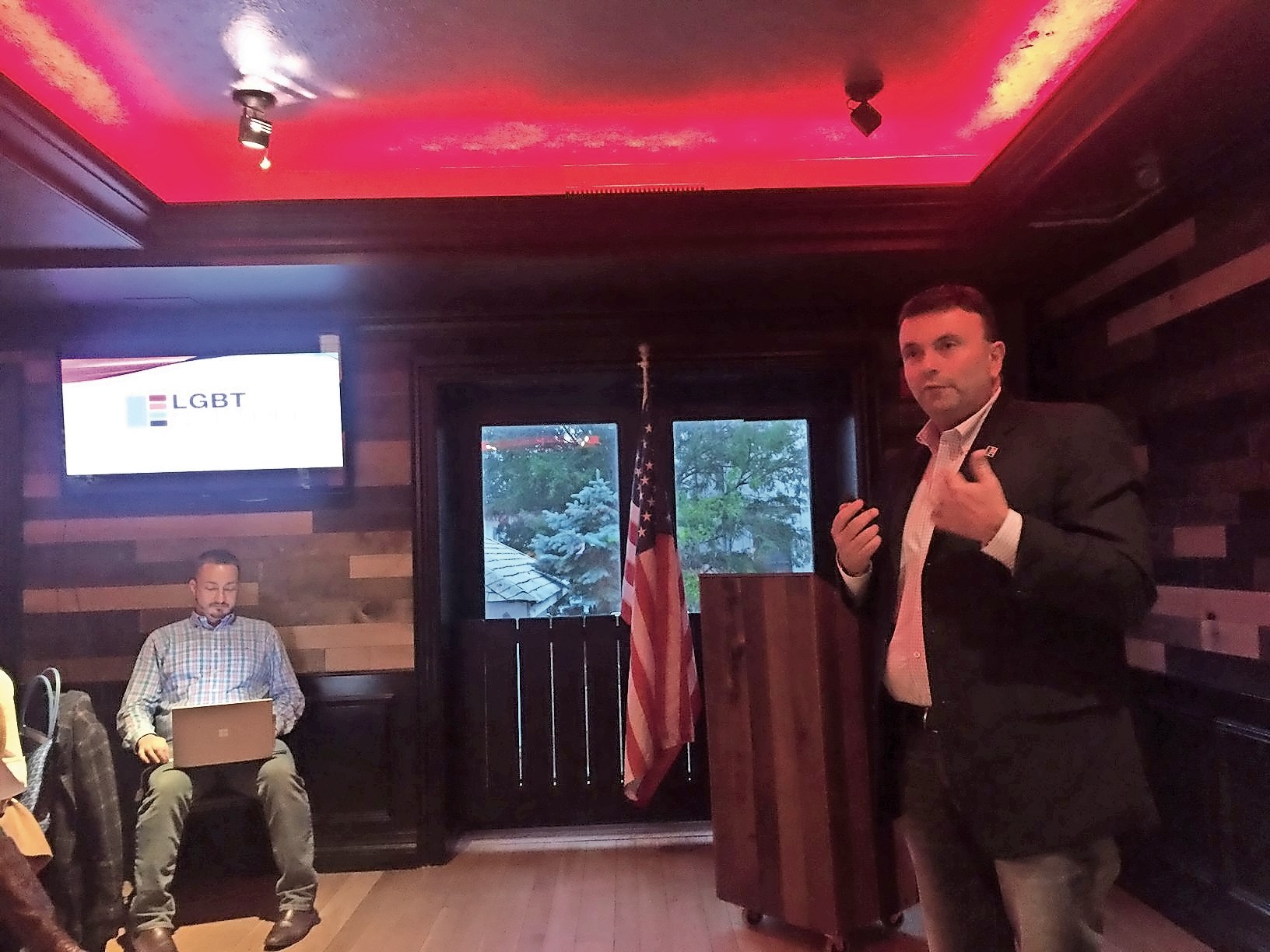 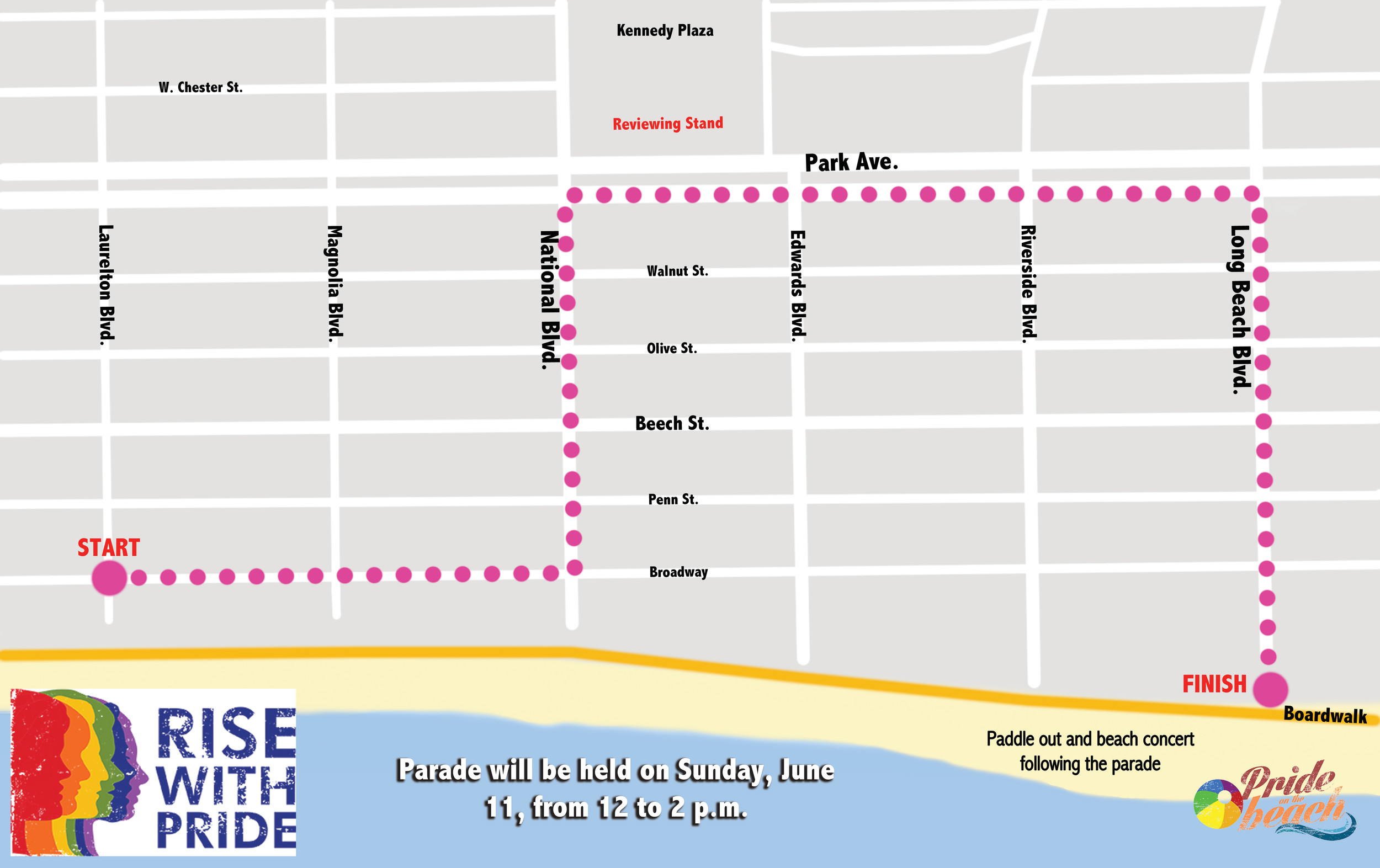 The Rise with Pride parade runs from noon to 1:15 p.m., and will feature floats, performers, student and professional marching bands, and more. The parade will close roads along the route. It will be followed by a beach concert from 1 to 6 p.m.
Previous Next
Pride on the Beach FAQ

How will the event affect public transportation?

There will be enhanced public transportation for Long Island Pride/Pride on the Beach weekend, including increased Long Island Rail Road service to and from Long Beach.

How will it impact traffic?

Expect more traffic on Saturday and Sunday. Events are spread out, however, so traffic should be typical of a late-spring weekend.

Where will guests and residents park for the event?

Many parking locations have been secured, including fields in Point Lookout, Lido Beach, Long Beach middle and high schools and Oceanside High School, among others. A full listing of parking locations will be posted at www.lipride.org. Free shuttle service will be provided to downtown Long Beach throughout the weekend by the LGBT Network.

Will the beaches be more crowded than usual?

There will be two main events on the beach. Larger crowds are expected on the beach at Long Beach Boulevard on Saturday, June 10, from 10 a.m. to 3 p.m., and for events on Sunday, including a beach concert from 1 to 6 p.m.

Will I need my beach pass?

A beach pass is required for events on the beach.

Will there be road closures?

There will be road closures only on one day, for a short period, on June 11. Long Island Pride/Pride on the Beach features the 27th annual Long Island Pride Parade from noon to 1:15 p.m. The parade will close roads along the route.

Will alcohol be served on the boardwalk and beach?

The LGBT Network has proposed a special event restricted-access VIP tented area, beginning at a $75 entry fee, for Saturday, June 10, and Sunday, June 11, that would include beer and wine, with private security provided by the LGBT Network.

For more information and a full list of events, go to www.lipride.org.

Thousands of people are expected to come to Long Beach for the 27th annual Long Island Pride celebration in June, and organizers sought to allay residents’ concerns about crowds, traffic, safety and other issues at Monday’s Chamber of Commerce meeting.

The event, Pride on the Beach, organized by the LGBT Network, is set to take place June 9-11 and is expected to attract about 10,000 people over the course of the weekend. It will include a parade, a 5K race and a family fun run on the boardwalk, a beach concert, a boat parade along Reynolds Channel, a Shabbat service, a beach party and activities, a market fair with hundreds of vendors, a cabaret night at the library, a memorial paddle-out, programs for LGBT youth, and a Taste of Long Beach and other events aimed at driving visitors to local shops and restaurants, organizers said.

“We’re very excited to welcome the pride festival to Long Beach," City Council Vice President Anthony Eramo said. "I believe it’s going to be a great weekend of family fun activities, and highlight the inclusive nature of our beautiful city."

The parade on June 11, called Rise with Pride, is expected to draw 5,000 to 7,000 participants, and is the official solidarity march for the tri-state area. It will coincide with a national LGBT march in Washington that day, and will mark the one-year anniversary of the attack on the Pulse nightclub in Orlando, Fla., where a gunman killed 49 people.

“It’s going to be really special,” said David Kilmnick, a Long Island Pride co-founder and chief executive officer of the network. “It’s an LGBT pride march, but it’s about bringing all the groups together. We’re getting the traditional groups signing up, but it’s going to be a very diverse makeup of groups and causes. We have everyone from schools marching to both the Nassau and Suffolk County police departments marching. And for the first time, the Boy Scouts are marching.”

Kilmnick said he did not believe that the national event, which is expected to attract hundreds of thousands of marchers, will impact turnout in Long Beach. “[W]e have to keep people from Long Island on Long Island and not going to D.C.,” he said. “But what we’re hearing from people on Long Island is, ‘Why should I go [to D.C.] if all of these things are going on in my hometown?’”

The LGBT Network has partnered with the City of Long Beach, Bethpage Federal Credit Union, TD Bank, Arizona Iced Tea, Northwell Health, South Nassau Communities Hospital and others to organize the event. Kilmnick declined to say how much Pride on the Beach would cost, but acknowledged that it would be more than the $300,000 grant the organization received through the state’s Regional Economic Development Council last year to cover costs associated with the event and to promote tourism. The city said it expects to be fully reimbursed for any expenses.

“Half of the grant is for municipal services in Long Beach,” Kilmnick told the Herald. “And the other allows us to bring in a better entertainer so we can bring people to the region.”

Organizers and city officials announced nearly a year ago that the event would come to Long Beach, after it had been held in Huntington since 1991. “It’s going to be different because Long Beach is offering a lot more to do than Huntington,” Kilmnick said, “and that includes all the great restaurants and shops and cultural facilities that will be part of the weekend. We have a community and a city on Long Island that is not only embracing the pride event, but they’re getting involved and they’re participating and want to welcome people to the city.”

More to do in Long Beach
Though the parade had previously attracted more than 1,000 participants and hundreds of spectators, last year’s event was canceled due to a dwindling turnout and a shorter parade route that did not go through “the heart of Huntington,” Kilmnick said. A related festival at Heckscher Park, however, saw attendance increase over the years.

“We could be in Huntington every single year if we want — but it’s a matter of an event being brought to a place where we can make it better for Long Island’s families and more accessible to people who couldn’t access it for the past 26 years,” Kilmnick told residents at the chamber meeting.

Jenny Montiglio, owner of Ooh la la in Long Beach, which also has a location in Huntington, said that she supports a local pride event but felt that the parade there was not well organized and had concerns about the benefits to local businesses.*

“I hope to see that change when it comes to Long Beach,” said Montiglio, who was not at Monday’s meeting.

Kilmnick dismissed claims that the event was disorganized, calling them “completely inaccurate.” “After 25 years, people became complacent, and weren’t innovative or thinking about how they can work with the organizers to show off the downtown,” he said.

Concerns about crowds, safety
Residents and business owners at the meeting said they supported a local pride event, but raised concerns about large crowds, security and safety, especially amid rumors that Cyndi Lauper, the B-52s or another major headliner was set to perform at the beach concert — which is scheduled for 1 to 6 p.m. on June 11 — and about alcohol at the event.

“We’re with you … I think everyone in Long Beach is happy to have you here,” resident Eileen Hession told Kilmnick. We just want to be assured that it’s not going to be crazy. We have one crazy day a year here,” Hession added, referring to Irish Day, “and you’re multiplying that by three.”

Kilmnick could not yet say who would headline — it’s not Lauper, he said. He added that beer and wine would be served — not sold — at private VIP tents on the beach at a cost of $75 per tent.

Organizers have yet to apply for an event permit, but city officials said that approval would allow alcohol to be served on the beach, as it is at the Long Beach International Film Festival and other events.

Organizers have also been working closely — and meeting regularly — with the Long Beach and Nassau County police departments, Kilmnick explained, as well as other law enforcement agencies. LGBT Network will also bring in its own private security to oversee the event.

“In terms of the setup, with some of the larger events that happen, like Irish Day or the Polar Bear plunge, those best practices have been employed,” Kilmnick said. “Planning has been, contrary to rumors, taking place for a good nine months. We feel very comfortable that things are going to go very smoothly and everyone is going to have a good time.”

Chamber officials said that members have expressed a number of concerns and had many unanswered questions, such as the benefits to local businesses.

Megan Casey, co-owner of Shine’s bar on West Beech Street, asked at the meeting whether more could be done to include West End businesses in addition to the Taste of Long Beach initiative — in which local shops and restaurants could participate by offering special deals that weekend — saying that most of the pride events were located in the center of town. Kilmnick said he was open to discussing other ways to drive visitors to the West End.

"We hope — and believe — that the strategic relationships that have been developed between the city of Long Beach and the Pride on the Beach organizers will result in a highly successful weekend that will bring enhanced awareness of, and interest in, our beautiful City By The Sea along with a positive economic effect for our local businesses," the chamber said in a statement after the meeting. "The chamber will continue to work with all parties to gather as much information, as soon as it is available, to pass along to our membership."

*An earlier version of this story incorrectly quoted Montiglio saying that some businesses in Huntington wanted the parade out of the village. We regret the error.