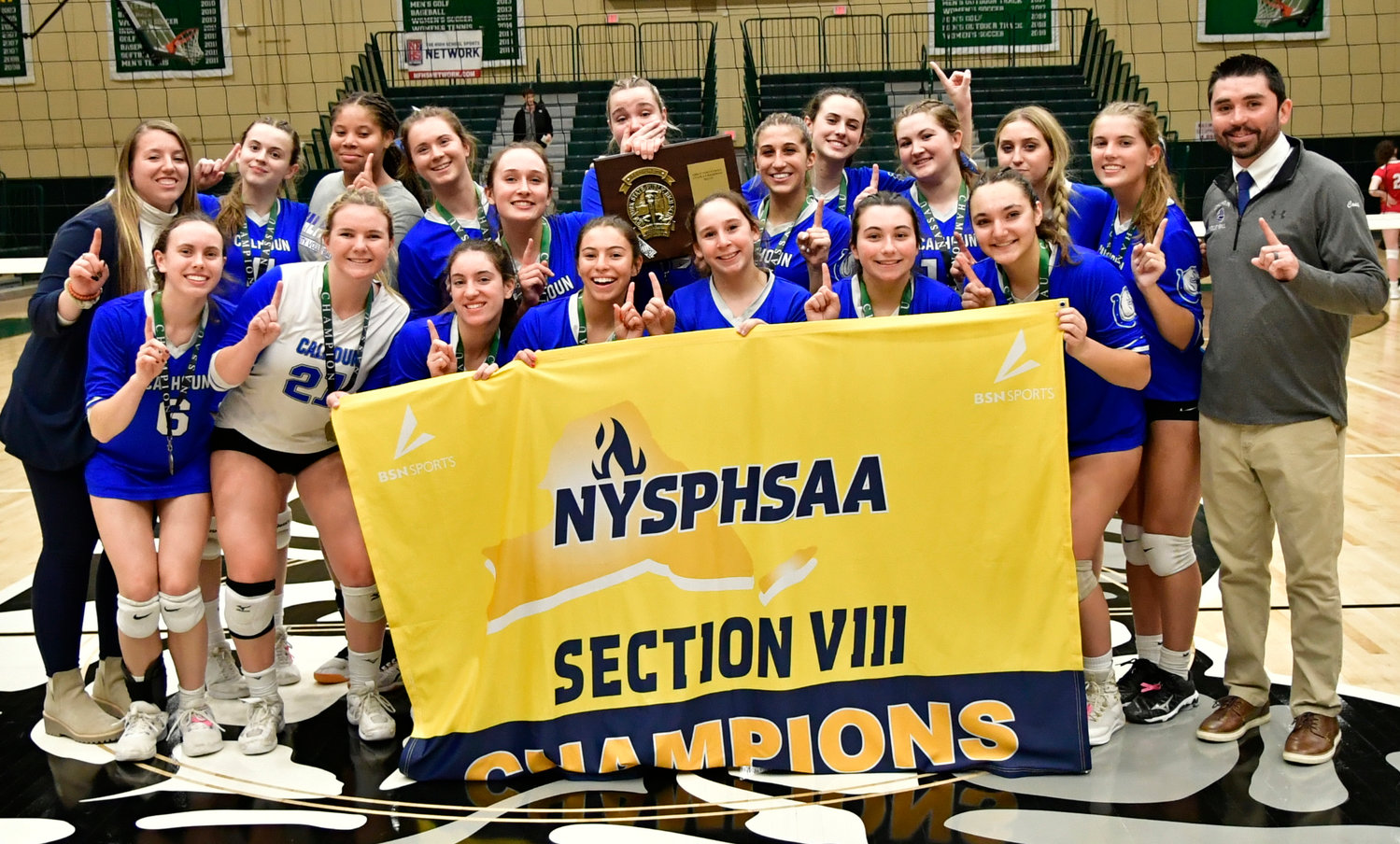 For a while, it looked like South Side would make quick work of Calhoun in the Nassau Class A girls’ volleyball title match Nov. 9 and justify its top seeding. But the resilient Colts refused to go down quietly and escaped with the program’s first-ever county championship.

Julia Lawrence had 14 kills, five aces and a combined 52 digs with Ella Maldonado and Grace Miller added 10 kills as No. 3 Calhoun twice rallied to win sets en route to a 15-25, 25-20, 25-19, 25-18 victory over the Cyclones in front of a raucous crowd at Farmingdale State College.

The Colts, a county finalist last season after beating South Side in the semis, swept Sayville for the Long Island Class A title last Friday to clinch a berth in the New York State tournament. Calhoun is 15-4.

“It’s actually crazy, it's so great,” Lawrence said while clutching the county championship plaque. “This year, we really, really wanted it. As a team, we really came together, and we knew that we weren’t giving up. We knew we wanted it so much.”

Ava Kelly had 12 kills and 16 digs and Sofia Vargas added six kills, 20 digs and four aces for South Side, which finished 15-3. But the pair were neutralized in the later sets by a tenacious Colt defense with Kelly attempting 54 kills on the night compared to Vargas’s 47.

The Cyclones, who had yet to drop a set in the postseason, looked like a well-oiled machine at the start by scoring the first five points en route to a 16-5 lead in the first set. South Side pushed its lead to 21-8 before a late Colt rally fell short.

The Cyclones kept up the pressure and led 7-1 in the second set, but Lawrence and Victoria Zovich helped the Colts collect the next three points. South Side later led 18-12 before Calhoun began its epic run with four straight points highlighted by two Lawrence kills.

The teams split four points that put the Cyclones up 20-18, but the Colts finished the set with seven unanswered markers to tie the match. Lawrence had an ace, Olivia Ruisi a kill and Miller three kills during the run, including the clincher that bounced off two Cyclones.

“They love playing in deficits,” Colts coach Christina Strezenec said. “I guess it’s an adrenaline rush. Because of that, we developed pretty good stamina throughout the season and that’s why I think they’re able to turn it around and have short-term memory loss.”

South Side regrouped and took a 7-0 lead to start the third set and led by as much as 11-3 before Calhoun responded by scoring eight of the next 10 points. The Colts finally knotted the score at 16 after two straight South Side kill attempts went over the end line.

South Side regained the lead at 19-18, but Calhoun closed the session with another 7-0 run highlighted by two more Lawrence aces and two kills by Miller, who also co-stuffed a South Side spike for another point.

“I couldn’t tell you,” Scalice said about the two lost leads. “We played great in the first two sets in the beginning of the games. We’ve seen Calhoun five times this year and we know they’re relentless, athletic, and an excellent team.”

The rejuvenated Colts took a commanding 13-5 lead to start the fourth set and began to sense the championship. South Side got as close as 15-13, but Calhoun collected 10 of the last 15 points, including Gianna Lucchi’s touch volley off a fake pass that sealed the match.

“I’m so happy for us,” Miller said. “We worked tirelessly every day and we’ve really come together nicely and everybody on the team has put in the work. We deserve it.”