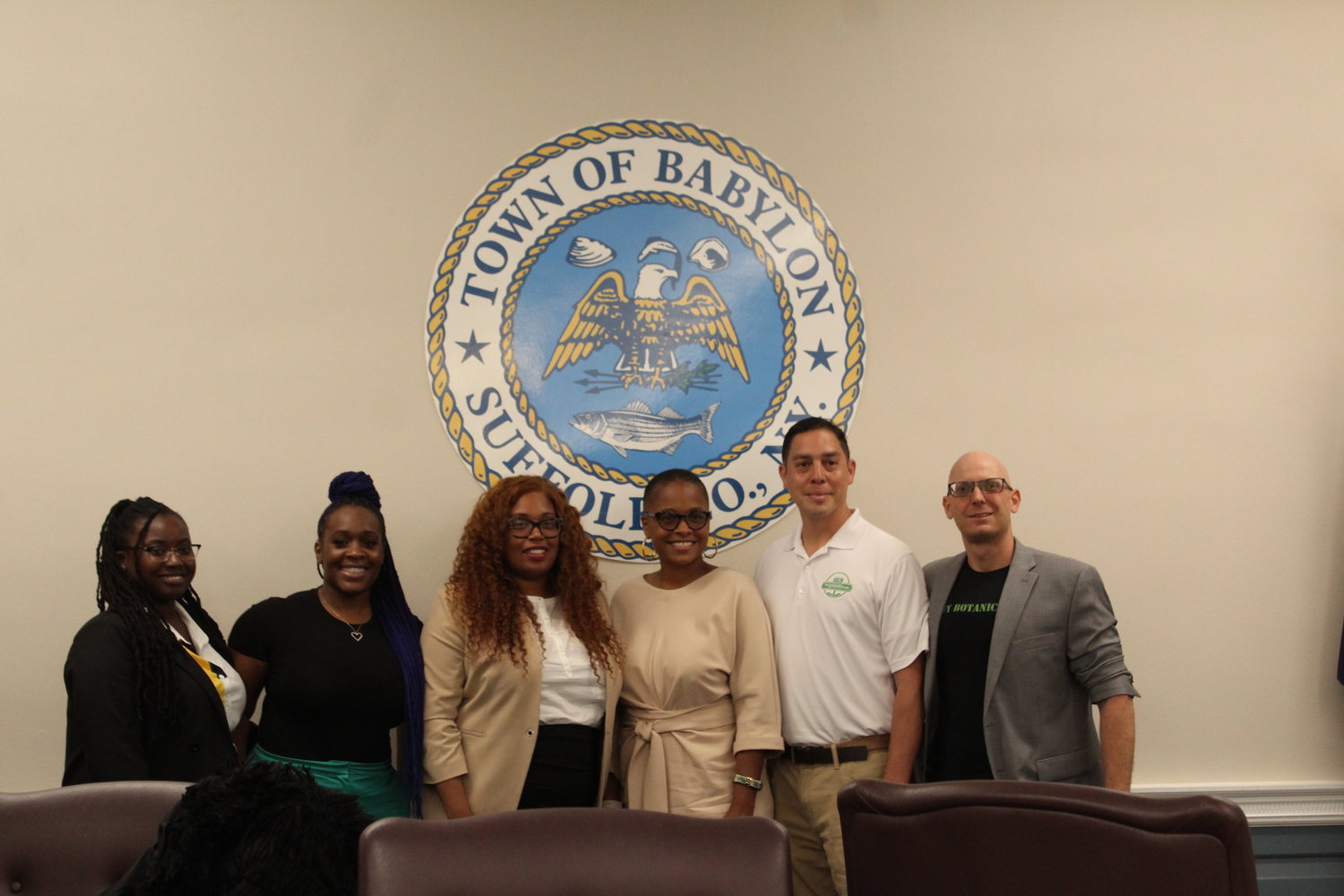 Leaders in the emerging cannabis industry sat down with neighbors and local officials to talk about the ups and downs of how the cannabis industry is rolling out. Jessica Nassaint, left, a former cannabinoid dispensary owner from Valley Stream, joined Esther Lelievre, Assemblywoman Kimberly Jean-Pierre, Cannabis Control Board chair Tremaine Wright, Osbert Orduna and Carmine Fiore.
Karina Kovac/Herald

It’s up to us — Those who are in the education space . . . to put the best education and information out there for people.”
Charlene Ali Advocate, Cannabis Business Owner
By Juan Lasso

Jessica Nassaint took her seat at Babylon Town Hall, rubbing shoulders with a virtual who’s who of the cannabis industry.

It was all part of a recent roundtable discussion hosted by Queens Assemblywoman Kimberly Jean-Pierre, offering a frank discussion of how New York’s budding cannabis industry was coping. Whether it was complaints about unlicensed competition, or fears of stigma, or even more local concerns, Nassaint, Jean-Pierre and the rest of the participants traded battle stories and common pain points of trying to jumpstart this new industry.

Although some started out with high expectations of joining what seemed on paper to be a lucrative industry with a fast-track approval process and wide community support, the reality has been anything but.

The first adult-use cannabis cultivation licenses were handed out to more than 50 local farmers last April. But the state’s regulatory and taxation infrastructure is still in a slow roll-out stage as officials in Albany balance opening up the industry while ensuring that those disproportionately affected by years of narcotics policing are the first to benefit.

Then there’s the fact that the overwhelming majority of municipalities, towns and villages across Nassau County have raised stiff opposition to allowing licensed cannabis dispensaries and on-site consumption lounges in their jurisdictions. Only five of 69 municipalities and town boards voted for them, and Valley Stream was not one of them.

The village submitted and voted on a resolution to opt out of retail cannabis stores and smoke rooms last December. And of the several towns and cities that gave the OK, some have passed additional zoning restrictions that cannabis entrepreneurs say severely limit the growth of their local cannabis market, preventing many small prospective businesses from breaking in.

Brookhaven in Suffolk County was offered as one example of where a municipality passed an ordinance banning marijuana retail stores and consumption lounges from downtown business districts, effectively restricting them to industrial areas.

“Because of zoning restrictions, the pathway for a small business or independent person that has a small group of investors to launch is cut off,” said one cannabis entrepreneur, Osbert Orduna.  “Without the capacity to have a robust legal team and millions of dollars in the bank like large corporate cannabis, it’s unattainable.”

Similar zoning restrictions like those in Brookhaven or Oyster Bay deters dispensary businesses, the panelists said, barring them from setting up shop in underutilized business zones or an already struggling downtown area.

But closer to home in Valley Stream, while trustees and village officials took note of the potential source of large revenue that could come from these cannabis businesses, officials cautioned a wait-and-see approach. They preferred to scout how other towns and cities would fare with their emerging cannabis zoning and business regulation before considering joining the fray.

Sibling duo Charlene and Adam Ali — longtime recreational and medicinal marijuana advocates and cannabis entrepreneurs — say such a strategy has its limitations, and is not without its costs over the long haul.

“The biggest downside of the wait-and-see method is that by the time municipalities opt-in — encouraged by what they see in other municipalities — a lot of businesses have gone elsewhere,” Adam Ali said. They “have passed considering a place like Valley in favor of a municipality with a longer and usually better infrastructure to support a new business coming in.”

Smart business people who must already sift through and comply with pages of detailed regulation — as well as evolving regulatory updates by the cannabis review board — will likely be turned off by towns and villages that place another hurdle of restricted zoning and overregulation, Charlene Ali noted.

“And the other side of it, too, is that Long Island people over here drive,” Adam Ali said. “They can easily drive to a municipality that is a little bit more lenient (or) friendly, even if it is a little bit further away from the foot traffic.”

The siblings said they were disappointed by the fact adult cannabis consumers would turn to places like Babylon and Oyster Bay for their recreational needs, while none of the revenue goes back to Valley Stream. But they are looking to make headway — with or without the village — as they take their cannabis business elsewhere.

Nassaint also has moved on. She closed up Wake and Bake Café, a cannabinoid dispensary on Rockaway Avenue, earlier this year. She hopes to open a cannabis dispensary with a blend of cannabinoid and THC cannabis products in a friendlier location in the coming months.

Adam and Charlene Ali have also started the Cannabis Accountability Group to ensure what they say is accurate information is made available to the public, all while following up on the latest decision from the Office of Cannabis Management, the state’s regulatory body.

“The OCM is doing the best they can to make sure that they keep this as an equitable process,” Charlene Ali said. “Yes, there are going to be caveats. Yes, there are going to be issues that we all don’t agree with. But it’s up to us — Those who are in the education space, those who are in the advocacy space, to do our best to put the best education and information out there for people.”