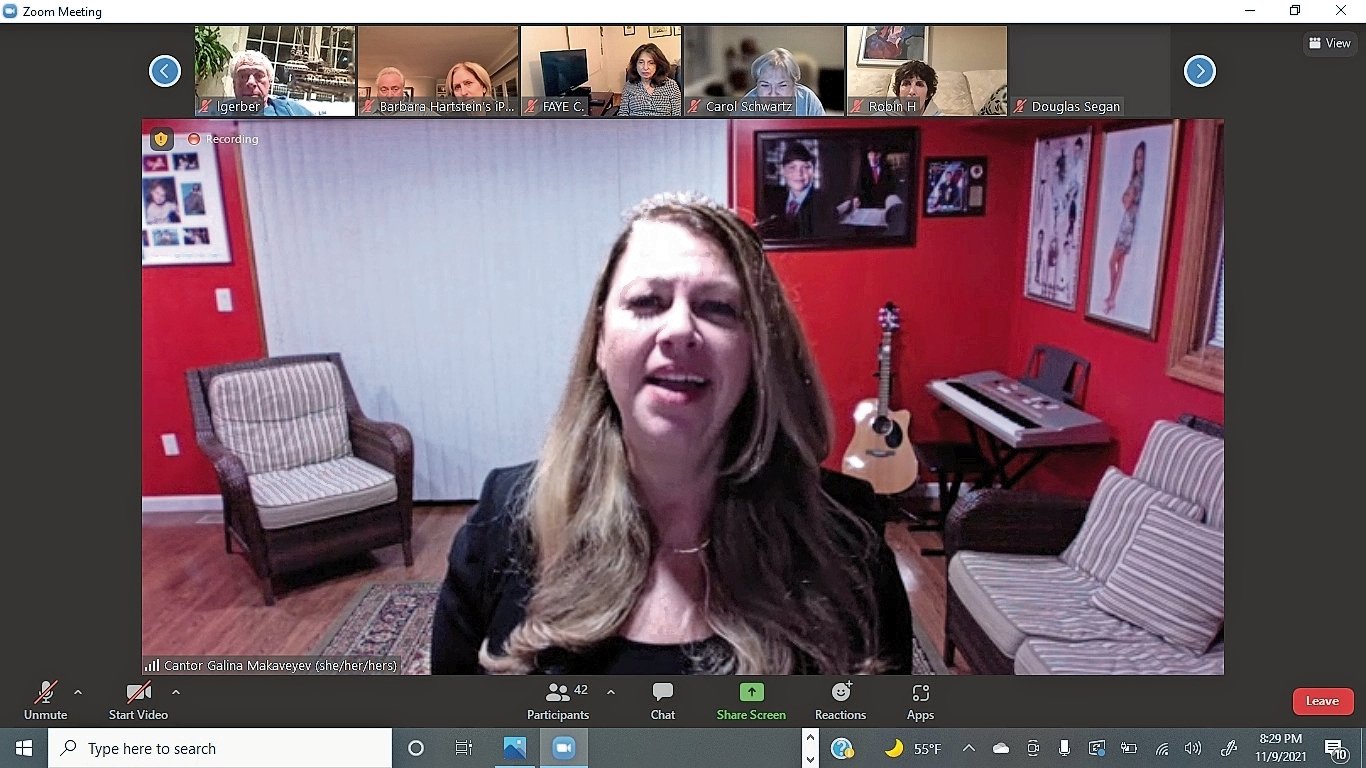 Makaveyev leads and teaches Temple Israel's Congregational Choir, which sings every month at services. She also teaches weekly virtual Hebrew language classes to adults. "My Cantorate is empowering others to thrive through Judaism," Makaveyev wrote in a text.

Overcoming a dearth of Jewish education in her native Ukraine, Hewlett resident Galina Makaveyev became a cantor, and celebrated her 20th anniversary in that role at Temple Israel of Lawrence after the synagogue’s June 3 Shabbos service.

Makaveyev, was hired as the temple’s cantor in July 2002. “I knew that I made it,” she said at the event honoring her. “I could become an American citizen, and I could use my musical talent and skills to serve a greater purpose.” A cantor sings the liturgical music and leads prayer in a synagogue.

Makaveyev came to the United States in 1995 from Israel, where she lived for five years after emigrating in 1990 from Kiev, Ukraine, her homeland, then part of the Soviet Union.

“My only connection to Judaism was eating chicken soup with matzos on Passover, breaking fast after Yom Kippur and my mother’s stories of her family surviving the Holocaust,” she said. “My love of Jewish music was instilled in me from listening to my grandma Nessa singing songs in Yiddish, from performing in Kiev’s Yiddish Theater and, later, singing with music bands in Israel.”

In 1994, Makaveyev graduated from the Academy of Music and Dance in Jerusalem with a bachelor’s degree in choir directing and music education. In the U.S., she met a Russian cantor who inspired her to start a cantorial career. She applied to Hebrew Union College – Jewish Institute of Religion, in Lower Manhattan.

“When one of the college professors asked me at the interview, ‘How do you celebrate Shabbat?’ I was like, ‘What are you talking about?’” Makaveyev recalled with a laugh. “I was Jewish by blood, but I had no idea how to practice Judaism. So the college accepted me. However, during the summer I had to go and to take courses that, usually, converts take — Introduction to Judaism. I was the only one in the class who was Jewish; the rest of the people were not Jews. So after taking a three-month course, I came back and they accepted me into the program.”

Makaveyev graduated from the Jewish Institute of Religion in 2002, the year she was hired at Temple Israel. She and her husband have two children.

As cantor and director of education at the temple, she has connected with many people. Through mourning or celebration, “you become closer to people and you become integrated in their lives,” Makaveyev said, adding, “you become a part of their family — we call it the big Temple Israel family.” She stays in touch with many of the children she teaches, and she has officiated at some of their weddings.

The 20th Anniversary in Worship and Concert celebration for Makaveyev was filled with music, and also served as a fundraiser for future musical events at the synagogue. Roughly 70 people attended in person — and enjoyed an impressive spread of desserts toward the end of the program — while nearly 30 took part on Zoom.

Temple Israel presented a dedication Torah to Makaveyev, “with a beautiful new cover,” temple President Doug Segan said, explaining that the cantor “plays an integral role in the education of our students,” preparing young children for bat and bar mitzvahs and teaching Judaism to adults.

“She’s supported every family in both their happy occasions, life-cycle events and in moments of tragedy,” Segan said, adding “Having someone (serve as cantor) for so many years — obviously the connection is that much stronger.”

Temple Israel’s first vice president, Penny Schuster, said that the connections between Makaveyev and congregants “bring continuity and constancy.” Makaveyev “sings like an angel,” Schuster wrote in an email, “and you feel like she is singing both for and to you directly. Plus, her smile lets you know how meaningful the music is to her.” Schuster described Makaveyev as “gifted.”

While Makaveyev educates others, “she continues to evolve personally,” Schuster wrote, “pursuing a rabbinic certificate in gerontology and palliative care.” Schuster related Makaveyev’s work to tikkun olam, a Hebrew expression for “repairing the world.”

“As a cantor, Galina uplifts us through her words and musical gifts,” Schuster wrote. “And as a member of the community, she brings about change through her actions, whether building bridges with our interfaith partners or leading a Jones Beach clean-up day. To quote a hymn from the book of Proverbs, she is truly a woman of valor.”