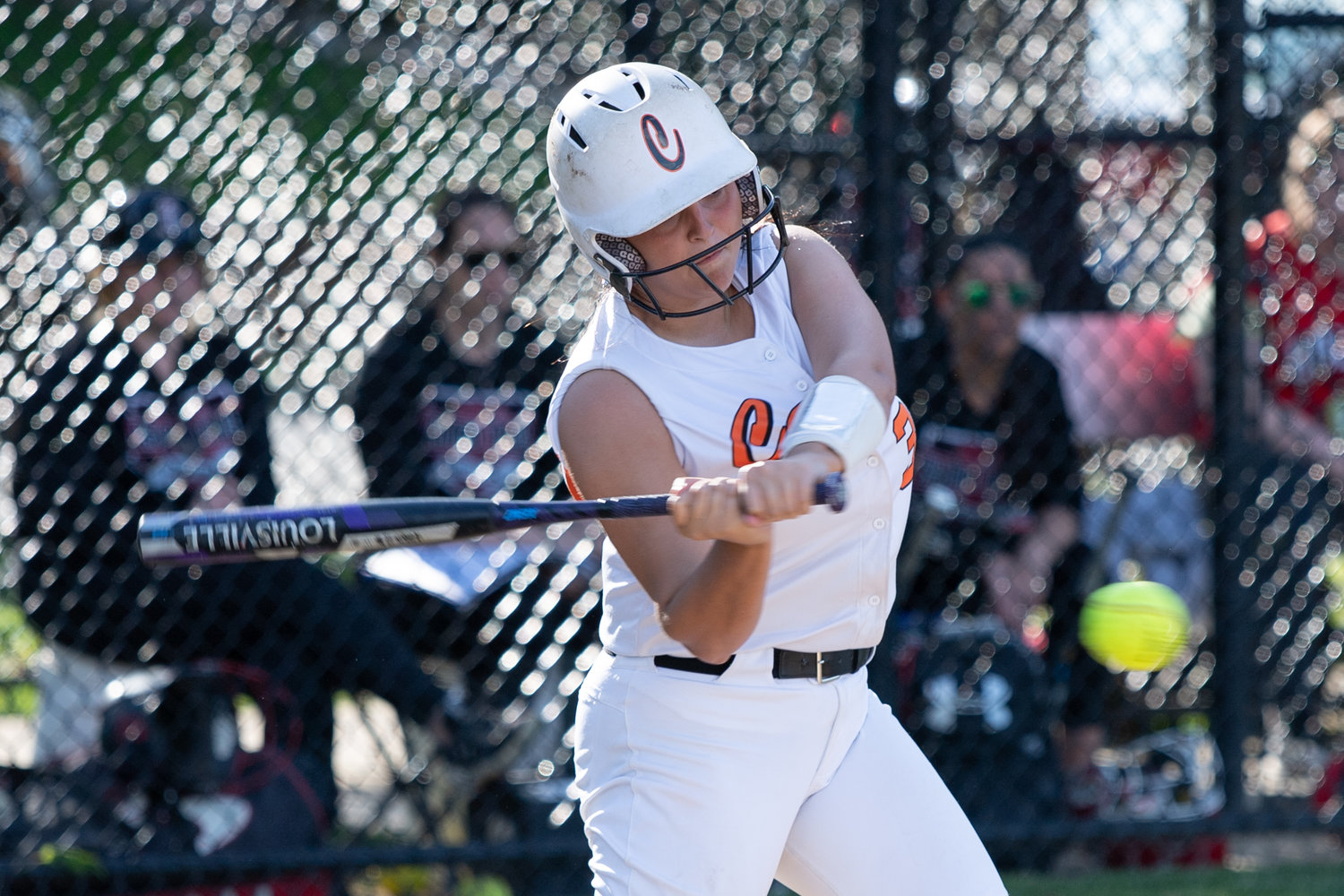 Freshman Sabrina Chapman and the Seahawks came up a little short in the Nassau Class A playoffs, falling 2-1 to visiting Island Trees on May 17.
Media Origin Inc./Herald
By Jamie deJong

Carey’s softball team came up just short in its Nassau Class A playoff game against Island Trees on May 17, falling at home 2-1.
Carey was the No. 4 seed and Island Trees was the 13-seed in the playoff bracket, but Island Trees came away with the narrow victory. Despite the premature finish to the season, Sewhawks coach Anthony Turco was understandably disappointed following the game, but was cognizant of the bigger picture and how important one
“We have to remember that they are high school kids.” Turco said. “At the end of the day, if losing this game is the worst thing that happens to them, they’ve lived a pretty good life. That yellow ball doesn’t really mean much when you think about it. What matters is whether they grow from it and the friendships they’ve gained.”
It was a pitcher’s duel in every sense of the term, with neither team scoring following the first inning. Offense was scarce on both sides, but Island trees did just enough to preserve the victory. Senior pitcher Ava Rigano pitched a complete game for the Seahawks, rebounding well from some first inning hiccups.  She finished the game with a staggering 13 strikeouts, and really wasn’t fazed following the initial two runs. Her most dominant and seemingly influential frame was the seventh and final frame. She struck out the side and seemed to put some wind back in the team’s sails, but it just wasn’t meant to be.
Defensively, the Seahawks were sharp as well, as junior Caylee De Meo had an unassisted double play on a line out in the second inning and sophomore Lauren Peers had a nice running catch in the third inning to prevent an extra base hit. Credit also goes to opposing pitcher Danielle Donahue, who also had a complete game and struck out 11 batters.


At the plate, the Seahawks just couldn’t get enough runners on base to do sufficient damage. The team appeared to be poised for an offensive clinic in the first inning, when junior Caylee De Meo and sophomore Grace Leimgruber led the game off with singles. De Meo then scored on a double steal, with the catcher electing to throw it to second and get Leimgruber out allowing De Meo to score, but the bats went cold from then on.
The Seahawks were then held hitless until the seventh inning, when Ava Rigano led the inning off with a single. Freshman Sabrina Chapman almost had the hit of the game and the season following this leadoff knock, as she hit a shot down the line which would’ve scored Rigano and tied the game, but it went foul by a matter of inches. The runner was stranded at second and the season was over. Both teams had to scrap and claw for offense, but Island Trees advanced by the skin of their teeth.
Rigano and De Meo earned All-County honors this spring. Peers was Honorable Mention All-County, and Leimgruber picked up All-Conference accolades.