discusses fake news and freedom of the press at leadership forum 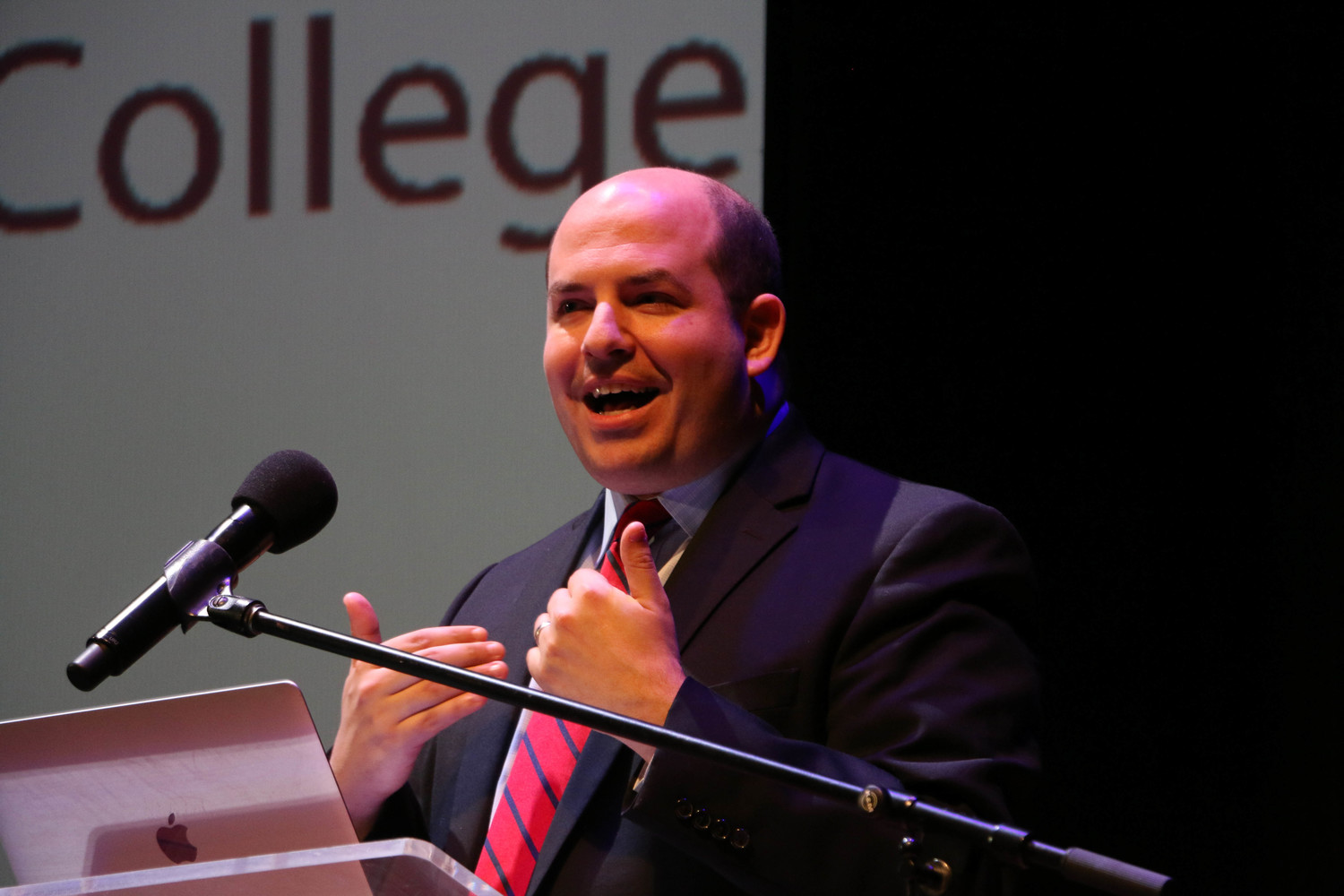 Brian Stelter was the keynote speaker at the 14th Joe and Peggy Maher Leadership Forum at Molloy College on April 5.
Jay C. Bass/Herald 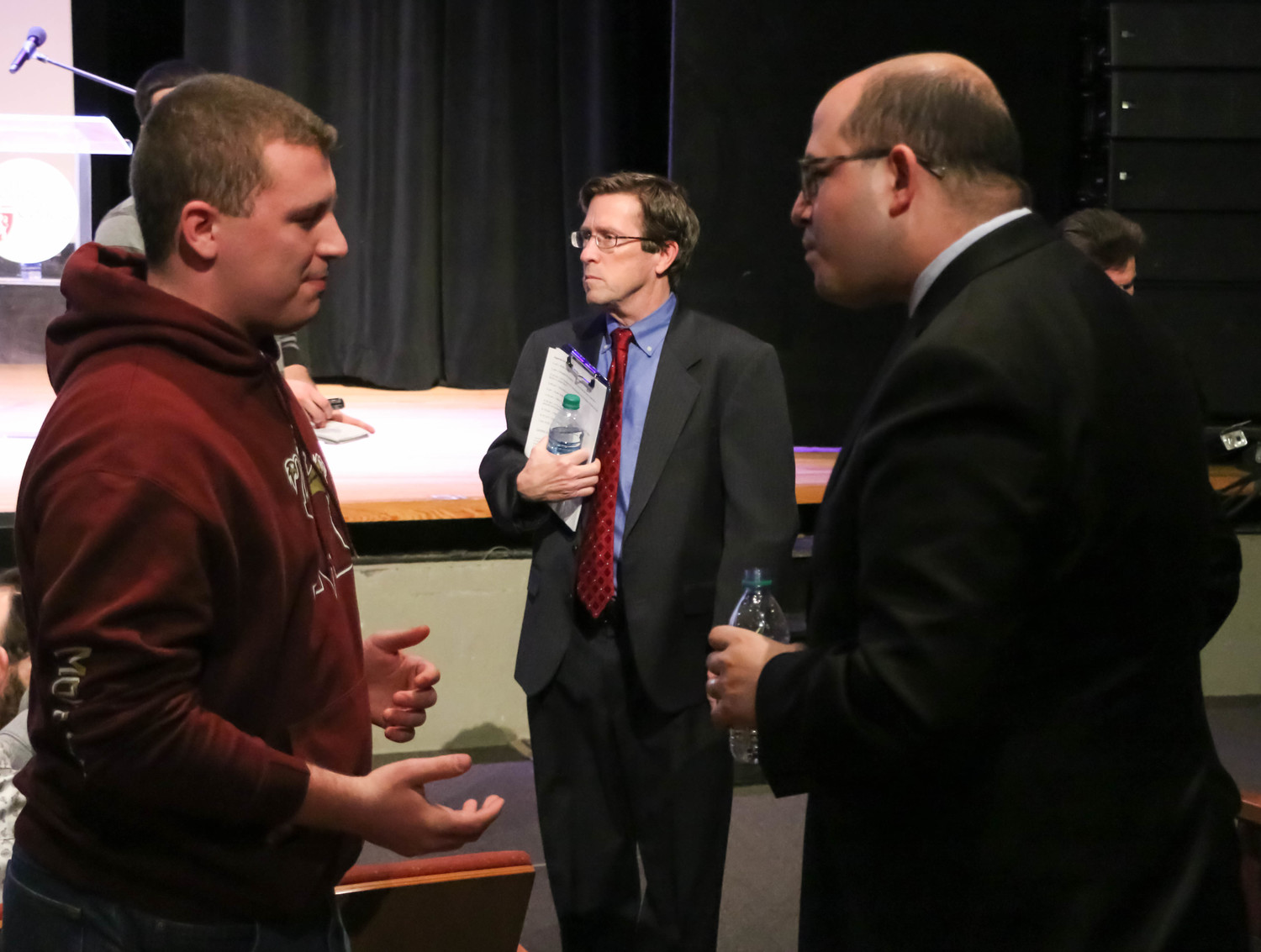 Lou Mazza, left, a freshman at Molloy College, spoke with Stelter after calling him out for having a liberal agenda.
Jay C. Bass/Herald
Previous Next
By Ben Strack

“Are you pushing a liberal agenda to take away the Second Amendment?” freshman Molloy College student Lou Mazza posed to Brian Stelter, host of CNN’s “Reliable Sources,” before the school’s 14th Joe and Peggy Maher Leadership Forum on April 5. “What’s your end game?”

“I don’t have an agenda to push,” Stelter answered back calmly, “except for facts and decency.”

Mazza’s question came after he brought up Stelter’s February interview with David Hogg, a survivor of the shooting at Marjory Stoneman Douglas High School who has become an outspoken gun-control advocate, during which he said Stelter let Hogg lie. Stelter denied the claim, explaining that Hogg often says “explosive” things in interviews, and that it is sometimes difficult to know when to correct facts and when to let a guest talk.

After the 25-minute exchange with students, Stelter walked up to Mazza and continued the discourse. Ultimately, it seemed, they agreed to disagree. Still, Mazza asked for a picture with Stelter.

“I think he’s a good guy, don’t get me wrong, but I think he’s got an agenda,” Mazza said of Stelter after the discussion. “There’s nothing wrong with having an agenda — Sean Hannity has an agenda — but when you pretend you don’t have an agenda and you do, that’s where people start to get annoyed.”

Stelter, 32, told the Herald backstage before addressing more than 100 people as the forum’s keynote speaker that he loves getting out of the office and speaking to consumers of the news, particularly those who are critical of him and his network. “We live in an incredibly polarized and sometimes toxic news universe,” he said, “and one of the only ways it’s ever going to change is if we talk to each other.”

Other students asked about the difficulty of balancing what stories are covered, in a news era that seems to be defined by Trump. Stelter noted that all stories seem to lead back to the White House these days, but that it’s important for the audience to hold journalists accountable if they think the balance is off.

“How much do we report what we need to know versus what we want to know?” Stelter posed to the few dozen students. “It’s this classic broccoli versus chocolate cake problem for newsrooms.”

In 2004, as a freshman at Towson University in Maryland, Stelter launched a blog called TVNewser, where he discussed the content of cable news networks. After graduating, he was hired by the New York Times, where he covered television and digital media for the newspaper’s Business Day and Arts sections, and was a lead contributor to the “Media Decoder” blog. He joined CNN four years ago.

His address to the Molloy community, titled “The Freedom of the Press,” was just the latest topical talk held in honor of Professor Joe Maher, and his wife, Peggy, who both died in 2010. Over the years, the forum in their name has welcomed a range of professionals, including MSNBC’s Chris Matthews, former Secretaries of State Colin Powell and James A. Baker III and other media and political leaders.

Drew Bogner, dean of Molloy, introduced Stelter, noting the current media climate that society now lives in. “If there is one phrase we know has made it into the lexicon this last year, it’s fake news,” he said, as the crowd joined in on the last two words, knowing what he was going to say.

During his hour-long discussion, he spoke about living in an age of “information abundance” and “information abuse,” and that more than ever, readers must question what’s reliable. Stelter said he believes in “truly fake news,” noting that Trump redefined the term from meaning made-up stories designed to trick people, to news that he doesn’t like or agree with.

Stelter asserted that a well-balanced news diet — reading left- and right-leaning publications and sites, as well as mainstream outlets in the middle — is important for today’s news consumer.

On CNN, he said, in an age where the president calls out his network as being fake news, he said freedom of the press is more important than ever, to ensure a competitive and open marketplace of information and ideas.

“He was very honest, willing to admit mistakes about his media outlet as well as others,” said senior business major Ryan Gribbin-Burket. “…I think he was honestly here to give us an honest perspective.”