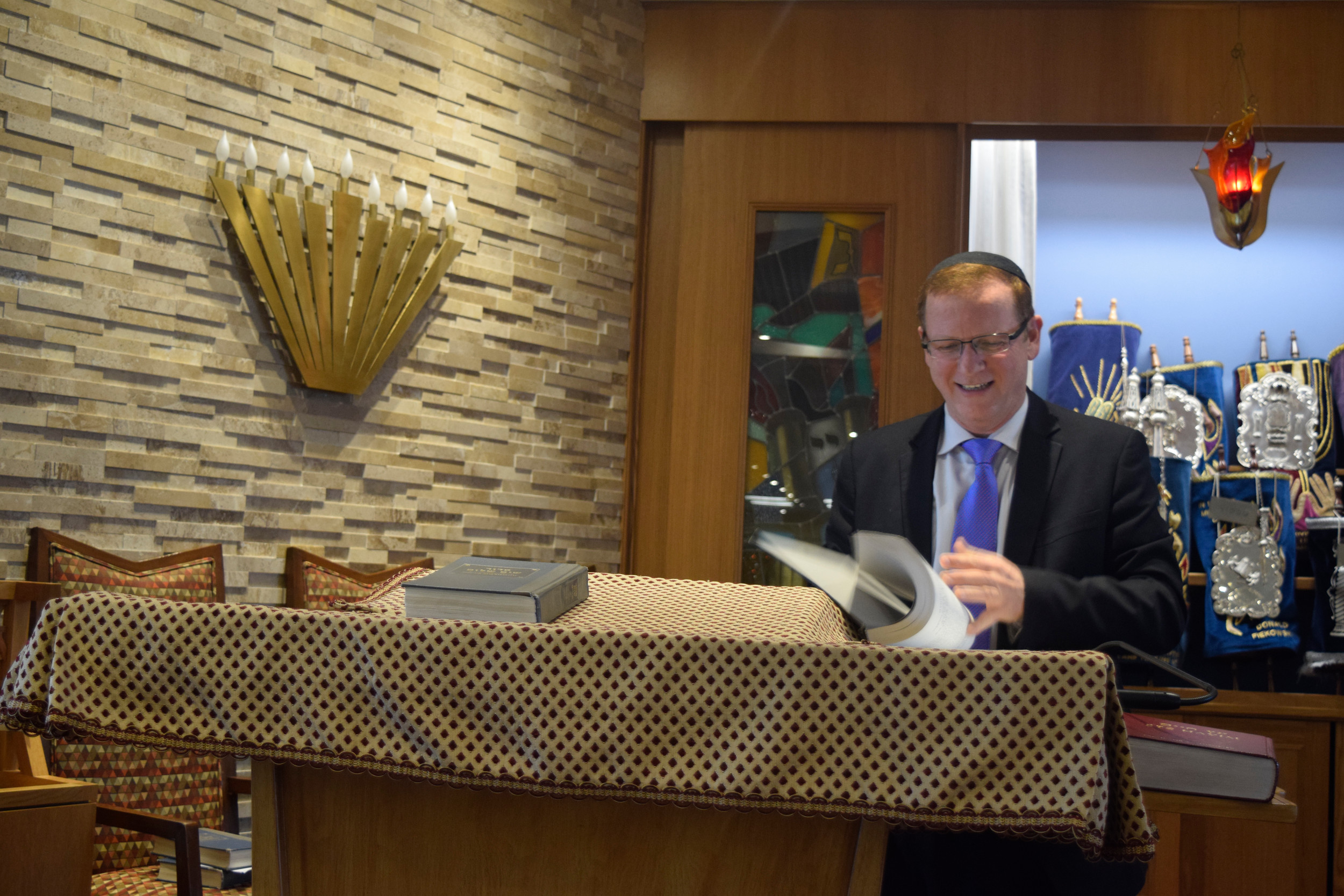 Rabbi Moshe P. Weisblum, the new spiritual leader of Congregation Beth Tikvah in Wantagh, read scriptures at the lectern at the synagogue in Wantagh.
Rebecca Anderson/Herald
By Rebecca Anderson

In Hebrew, “bashert” means “fated to happen.” After two years of searching for a new rabbi, members of Congregation Beth Tikvah said that they could finally shout “bashert” with revelation and joy.

Congregants of the conservative synagogue, nestled on Woodbine Avenue in Wantagh, near the Seaford-Oyster Bay Expressway, are now welcoming Rabbi Moshe Weisblum to the community. He will serve as spiritual leader of the nearly 300 families from Wantagh, Seaford and surrounding areas who comprise the congregation.

Weisblum, 56, became Beth Tikvah’s rabbi on March 1. Although he has only been in the community for a month, he said he already sees opportunities to help the synagogue succeed.

“First and foremost, I think coming together and the unity of faith is the most important,” he said. “I would like to see more programs, and definitely see the temple grow.”

Weisblum was born in Sedeh Ya’akov, Israel. His father, Rabbi Chaim Weisblum, is a renowned scholar. Moshe noted that he is a 14th-generation rabbi.

Before Weisblum came to the United States permanently, he studied computer science at the Ofrim Institute in Israel. In 1996, he was hired as the rabbi of Congregation B’nai Ahavat Shalom, in Union, N.J. While leading the synagogue, Weisblum continued his education, earning a Master of Business Administration from Fairleigh Dickinson University in 2003.

He moved to Annapolis, Md., to become the spiritual leader of Congregation Kneseth Israel. After 15 years at the synagogue, he applied for the rabbi’s position at Beth Tikvah and made Wantagh his new home.

“This was a marriage made in heaven,” said David Kamlet, chairman of the congregation’s board. “There was a sense from both ends that this was the man to lead us, and so far, it has proven to be more than we could’ve ever imagined.”

Congregation Beth Tikvah, formerly known as the Wantagh Jewish Center, has gone through a considerable number of changes since it recently merged with the Farmingdale Jewish Center and the Israel Community Center of Levittown.

Reconstruction of the temple, which was completed last year at a cost of more than $600,000, included refurbishment of the sanctuary, which features a new sound system, air-conditioning and electrical systems, seats and stained-glass windows, as well as refurbished pews, along with a new roof and a repaved parking lot. The arc of the sanctuary was also pushed back and redone with stone from Jerusalem.

Funds for the reconstruction were generated by the sale of both the Farmingdale Jewish Center building, which is now a mosque, and land on Hempstead Turnpike that housed the Israel Community Center of Levittown, where a Zwanger-Pesiri Radiology center was built. Congregation Beth Tikvah takes in members from Wantagh-Seaford and neighboring communities like Merrick, Bellmore, Levittown, Farmingdale and East Meadow.

“Since the rabbi has been here, he has invigorated this synagogue,” said Jerald Wohlstetter, the board president. “He is bringing in so many new ideas, and people are really enthused.”

Although Weisblum said that he is busy leading his new congregation, he finds time to pursue his other loves — playing six instruments, taking a ride in his boat or spending time with any of his 10 grandchildren.

“In life, there is a measurement of how you take things,” he said. “I try to use every spare moment to improve the world.”