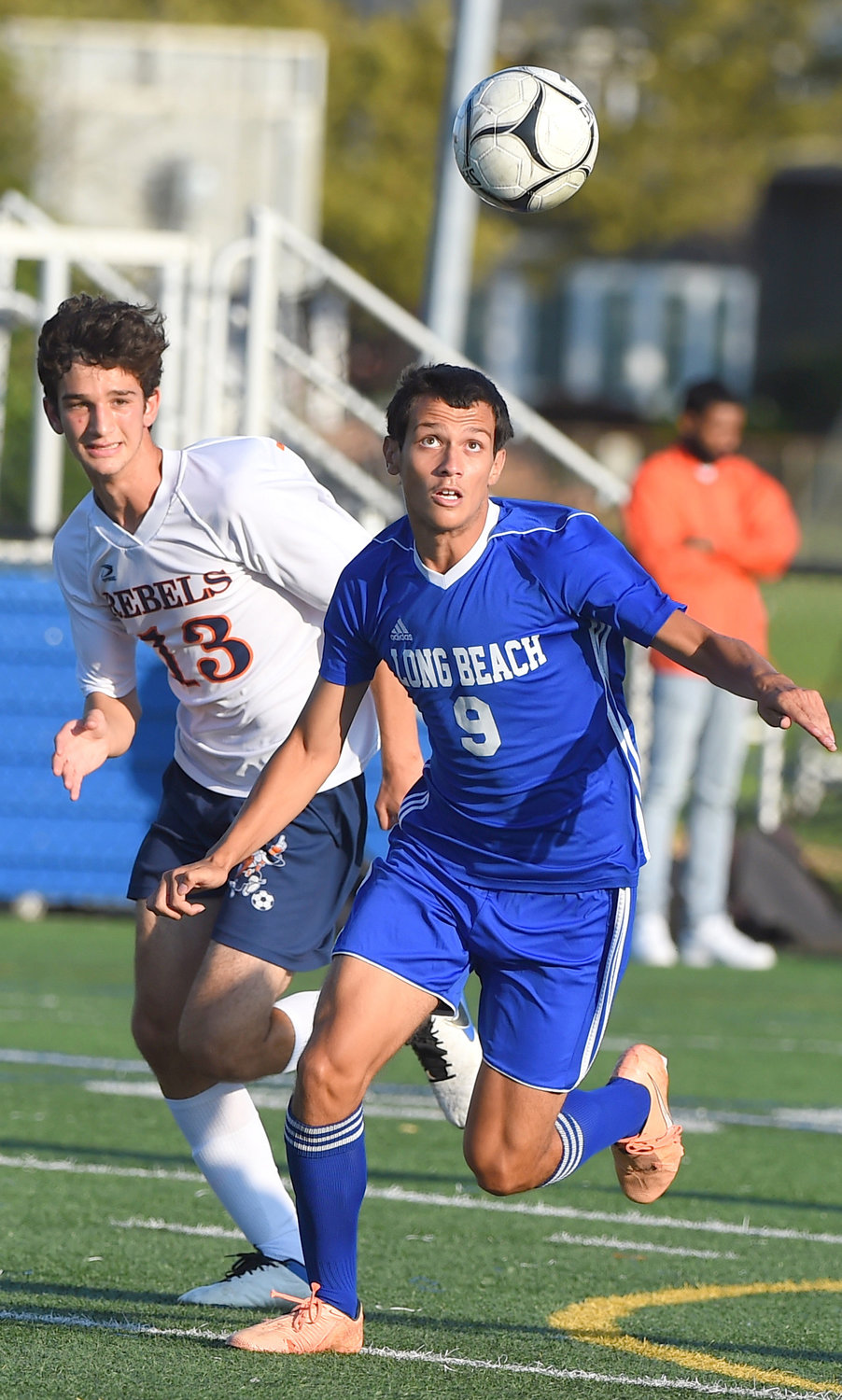 Arthur Quezada, right, has been a key contributor to Long Beach's offense with a team-co-leading eight points through the regular season.
Donovan Berthoud/Herald
By Tony Bellissimo

Long Beach was unable to take advantage of playing a man up for nearly 45 minutes of its Nassau Conference A1 boys’ soccer regular-season finale Oct. 15 and fell to visiting Mepham, 2-0, as the Pirates (8-0-4) upped their unbeaten streak to 12 games and created a deadlock with MacArthur atop the standings.

Deshaun Maitland scored in the first half and Dominic Saraceni sealed the outcome with 1:08 remaining for Mepham, which got three saves from goalkeeper Nicholas Parisi. It was the fourth straight match the Marines (5-4-3) failed to get on the scoreboard. Both of their October goals came in a one-goal victory over Great Neck North.

“Not capitalizing with Mepham down a man for over a half is hard to accept,” Long Beach coach Leo Palacio said after the game. “They adjusted well and it almost looked like they still had 11 out there. They’re a slippery team and I thought we didn’t play to win, but not to lose. We created our best chances in the last five minutes with a few corners, but we couldn’t get a foot on the ball in the box.”

The Marines settled for a fourth-place finish in A1 and head into the playoffs Friday against Kennedy at 4 p.m. with only a draw to show for its last four games. “We were a different team and a healthy team in the first half of the season,” Palacio said. “Injuries have taken a toll on us and even though we have everyone back, not everyone is 100 percent. And when you’re playing some guys at 70-80 percent, it’s a tough situation.”

Long Beach was coming off a hard-fought 1-0 defeat at MacArthur on Oct. 12. The Generals scored late when Austin Roth converted a pass from Kieran Weber. Marines junior goalkeeper Avie Mann turned aside the first five shots he faced that night. “That was a tough game, going to their place on senior night,” Palacio said. “We didn’t start strong but we played great over the last 20 minutes. But they found a way to score and we didn’t.”

The last time Long Beach scored was Oct. 2 when juniors Jesus De Los Santos and Yeris Miranda tallied against Great Neck North, with helpers from seniors Liam Sagy (team-leading 7 assists) and Jaden Bloom. The result stretched its unbeaten streak to six consecutive games at the time and had it in contention for the conference title with a 5-1-2 mark.

“We need a fresh start because this isn’t the way we want to go into the playoffs,” Palacio said. “The good thing is, we know we have enough talent to compete.”

Four Marines have at least three goals on the season: De Los Santos leads the way with four, while Miranda and fellow juniors Ryder Moore and Aran Corbett, and senior Arthur Quezada have three apiece. Quezada is tied with Sagy for the lead in points with eight. Mann, behind a defense led by senior Anthony Camas, posted 67 saves in conference play.