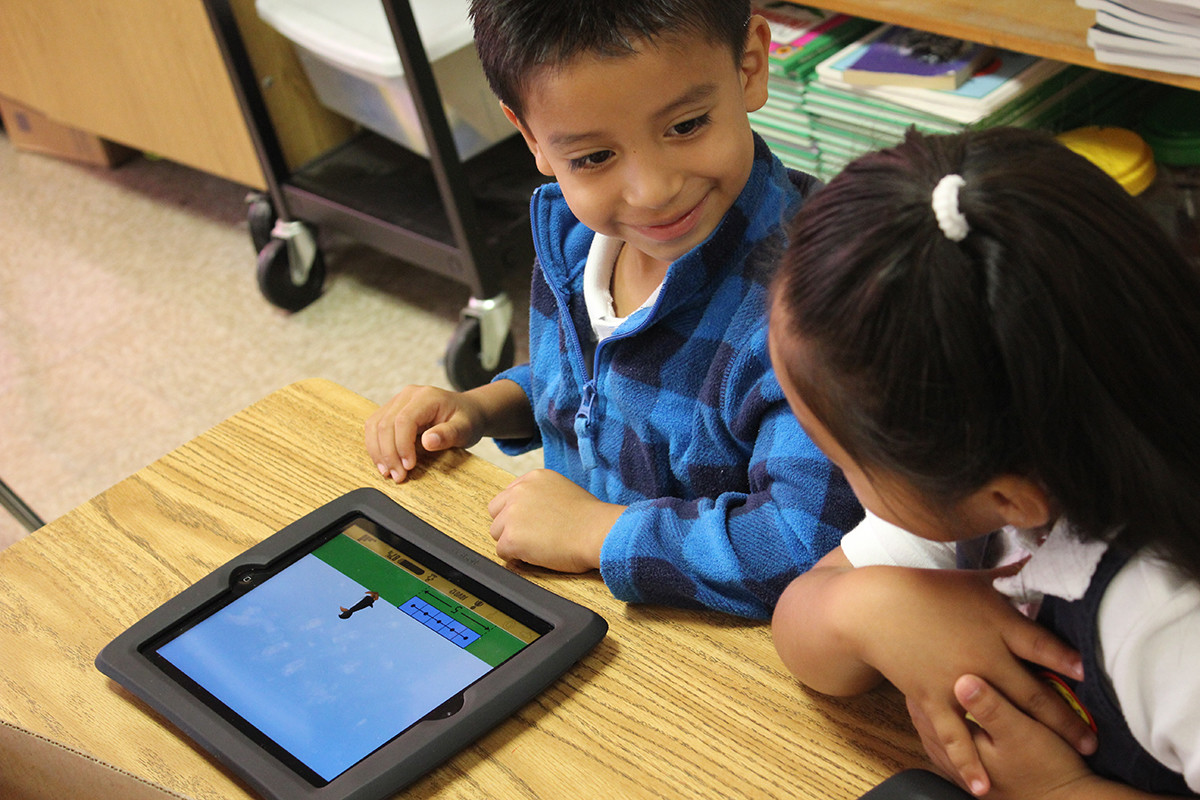 First- and second-grade students can use ST Math to determine how many blocks Jiji would have when she gets to the right side of a computer screen, after losing or gaining more blocks.
Courtesy MIND Research Institute
By Melissa Koenig

Students in District 13 began using a cutting-edge, math computer program at the end of November, which uses puzzles in lieu of word problems to help students visualize math problems.

“They have no directions to read [and] there are no math questions that are used,” District 13 Director of Technology Andrea DiMango said about the program, ST Math.

The program offers more than 200 visual games that students in kindergarten through sixth-grade can use to better understand mathematical concepts, according to Karin Wu, MIND Research Institute’s vice president of engagement. According to Mind Research Institutes website, Dr. Matthew Peterson, the founder of the Irvine, Calif. based company that created ST Math, did so because he struggled with mathematics as a child until his father drew pictures to help him visualize the problems.

“With visual learning, students are better equipped to tackle unfamiliar math problems, recognize patterns, and build conceptual understanding,” Wu told the Herald via e-mail. “Without language barriers, the problem is accessible to all students, regardless of skill level or language background.”

“Students would see why their answer is incorrect in practice, so the feedback is part of the teaching, and they are able to take action on the perceived behavior,” said DiMango.

If a student persistently makes mistakes, a border around the screen would flash red to signal a teacher. “It’s really minimally intrusive for the teachers,” DiMango said.

Teachers, who used the programs themselves in November as part of an eight-course training on the program, can monitor students’ work on the program and see where they are having trouble.

Assistant Superintendent for Curriculum and Instruction Judy La Rocca said she found out about the program at a superintendents conference in May 2016. She decided to implement it into the schools, she said, because “it aligns with how we want to teach math- going from pictorial to abstract concepts.”

Non-linguistic learning is based on Allan Paivio’s dual-coding theory, which states that humans process and represent information in verbal and non-verbal forms. The linguistic form focuses on storing words and phrases, whereas the non-verbal form focuses on using mental pictures, imagery and physical sensations. It concluded that the more we use both linguistic and non-linguistic imagery forms, the better we can think about and recall knowledge.

Peterson put the theory to work, and shared the program’s success at a TED Talk in 2011. He said that in California, where the program started, 25 percent of students were English language learners, another 15 percent had language based learning difficulties, such as dyslexia, 20 percent failed language comprehension tests and many more considered themselves visual learners. When the program was adopted in schools throughout the state, the schools tripled their rate of math proficiency. More recently, a New York state analysis of schools that use ST Math also showed that schools that used the program outgrew the percentile rank of schools that did not use the program by 6.8 points between 2012 and 2014.

“The simple innovation of removing the language barriers is able to elevate math proficiency everywhere we put it,” Peterson said at the TED Talk.

For more information about the program or to request a demo, visit stmath.com.