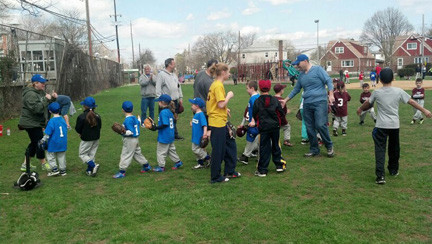 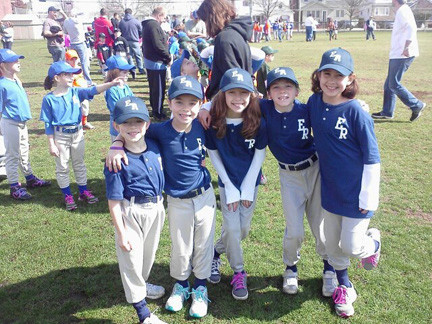 Team members were happy to see each other again after a long and difficult hiatus. 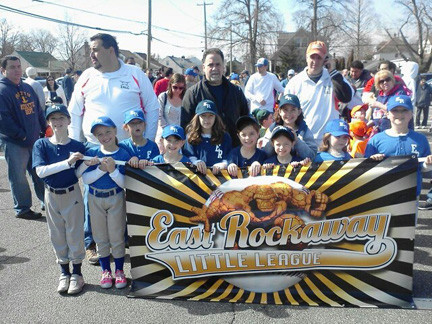 OPening day festivities started with a parade through the village into the John Street Complex.
Courtesy East Rockaway Little League
By Mary Malloy

The East Rockaway Little League kicked off its second year as an official team with their Opening Day parade and ceremonies on April 13. More than 200 children, ages 4 to 15, will be participating this season.

“While each year brings something new and unexpected, this year we were faced with the obstacles that resulted from Hurricane Sandy,” said Mike Cilluffo, East Rockaway Little League president. “Our Board of Directors began working immediately after the hurricane to ensure we would still be able to play baseball six months later. As we quickly learned, our problems were far more extensive than we thought and lasted long after the water was gone.”

With so much lost by so many, the ERLL reached out to David Rhodes from Pitch In for Baseball, who was extremely generous in donating new and gently used equipment and supplies.

“You will see many stores have banners hanging in their storefronts that say ‘We Support East Rockaway Little League,’” said Cilluffo. “When you are in any of those stores, please thank them for helping us make your child’s baseball program so successful.”   More events and fundraisers are planned. For more information, visit ERBaseball.org, or the East Rockaway Little League Facebook page.