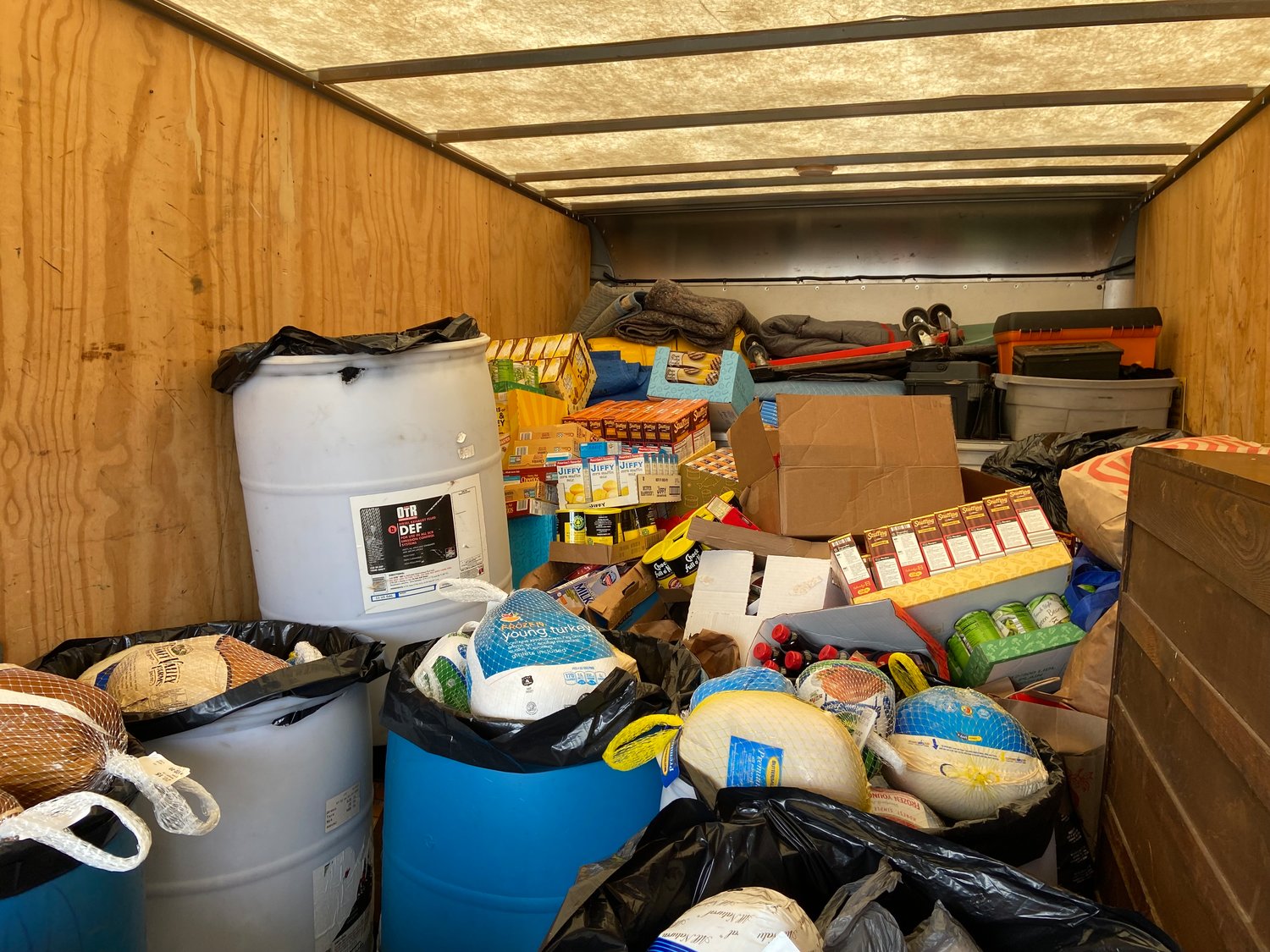 More than 150 turkeys and 1,500 pounds of food were collected for homeless veterans at the turkey drop at the Green Turtle in East Meadow last Sunday.
Mallory Wilson/Herald 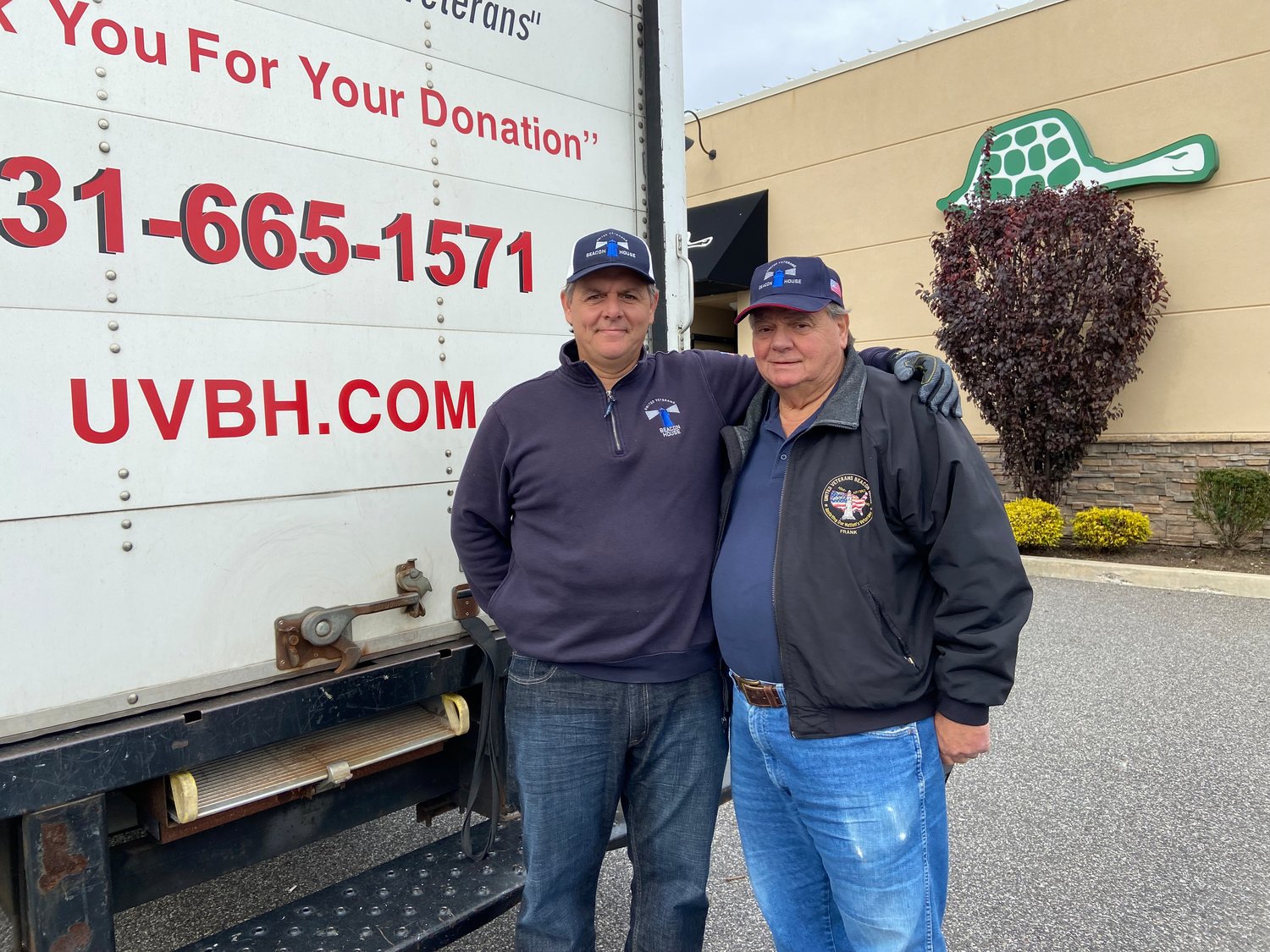 Frank Amalfitano, right, and his son, Frank, brought the collected food to the Beacon House in Bay Shore to be distributed to various locations across Long Island.
Mallory Wilson/Herald
Previous Next

Helping homeless veterans is such a small thing that we can do to help and say thank you.”
Greg Steiner, Nassau County Fire Riders
Veteran homelessness is on the rise

The Military Times, a publication that serves all branches of the U.S. military, reported this past March that the number of homeless veterans rose in 2020, even before the coronavirus pandemic erupted.

The report that the Military Times shared was based on surveys conducted in January 2020 by the U.S. Department of Housing and Urban Development, two months before businesses started to close during the pandemic.

The number of homeless veterans had declined from 2010 to 2019, with the number of vets without stable housing decreasing by more than 50 percent, according to the report. At the time of the new report, 21 out of every 10,000 veterans were homeless in the U.S.

Thirty motorcycles rumbled into the parking lot of the Greene Turtle Sports Bar and Grille on Hempstead Turnpike in East Meadow last Sunday for a special event. The Nassau County Fire Riders bikers were there for their fifth annual turkey drop to benefit veterans and their families.

“When we get together and do something fun and responsible and for the community, we’re not just a bunch of guys riding the bikes,” Pete Wenninger, an East Meadow resident and member of the Fire Riders, said. “. . . We’re saying we care about our veterans.” Wenninger, a Navy veteran, is also commander of East Meadow American Legion Post 1082.

The turkey drop was run for two decades by the Suffolk County-based I Don’t Know motorcycle club before the Fire Riders took it over.

“Helping homeless veterans is such a small thing that we can do to help and say thank you,” Greg Steiner, president of the Nassau County Fire Riders, said. “I think it’s such a worthy event to do.”

The turkey drop is annually held at the Greene Turtle, said Andy Trink, the Nassau Fire Riders past president, who has orchestrated the event since it moved to Nassau.

“Homeless vets don’t get recognized enough,” he said. “They’re still so many people out there that need caring from different organizations.”

Proceeds from the turkey drop go to United Veterans Beacon House, which was founded in 1994 and helps more than 800 veterans and veteran families each year across Long Island.

Frank Amalfitano, president and CEO of Beacon House, said the organization provides a full range of services. Beacon House has 50 housing locations across Nassau and Suffolk counties, with 25 of the homes for veterans only. The group also helps veterans find jobs, pay utility bills and arrange funeral services.

“It’s organizations like [the Fire Riders] that make stuff like this possible,” Amalfitano said. “We could never do this alone. The food that we’re getting here today saves us anywhere from $5,000 to $10,000.

Once food is collected, it’s brought to foundation headquarters, and case managers then distribute it to various locations.

“Veterans appreciate not being forgotten,” said Amalfitano, who served four years in the Air Force, including one year in Vietnam from 1968 to ’69. “It lifts their spirits up and gives them their dignity back.”