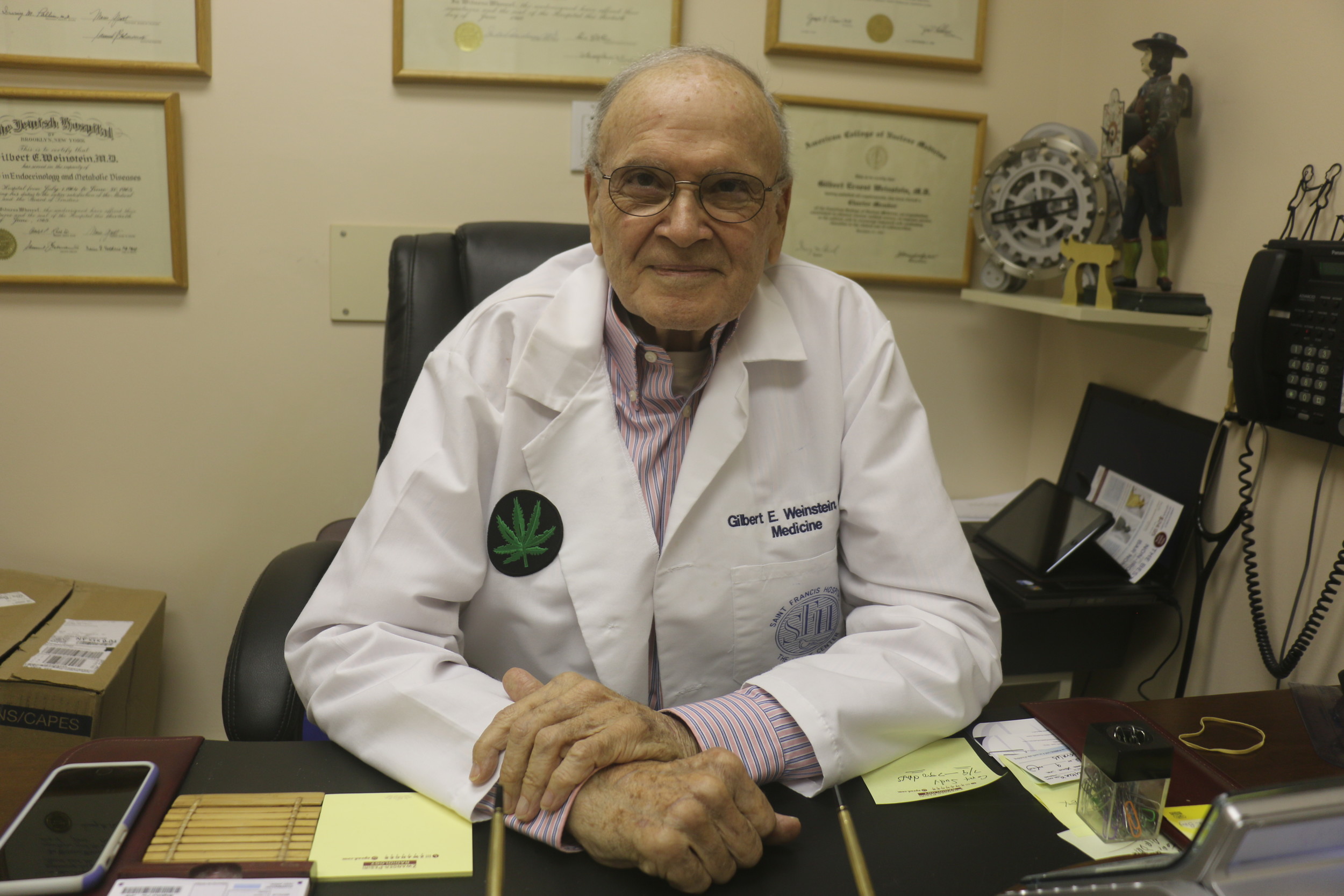 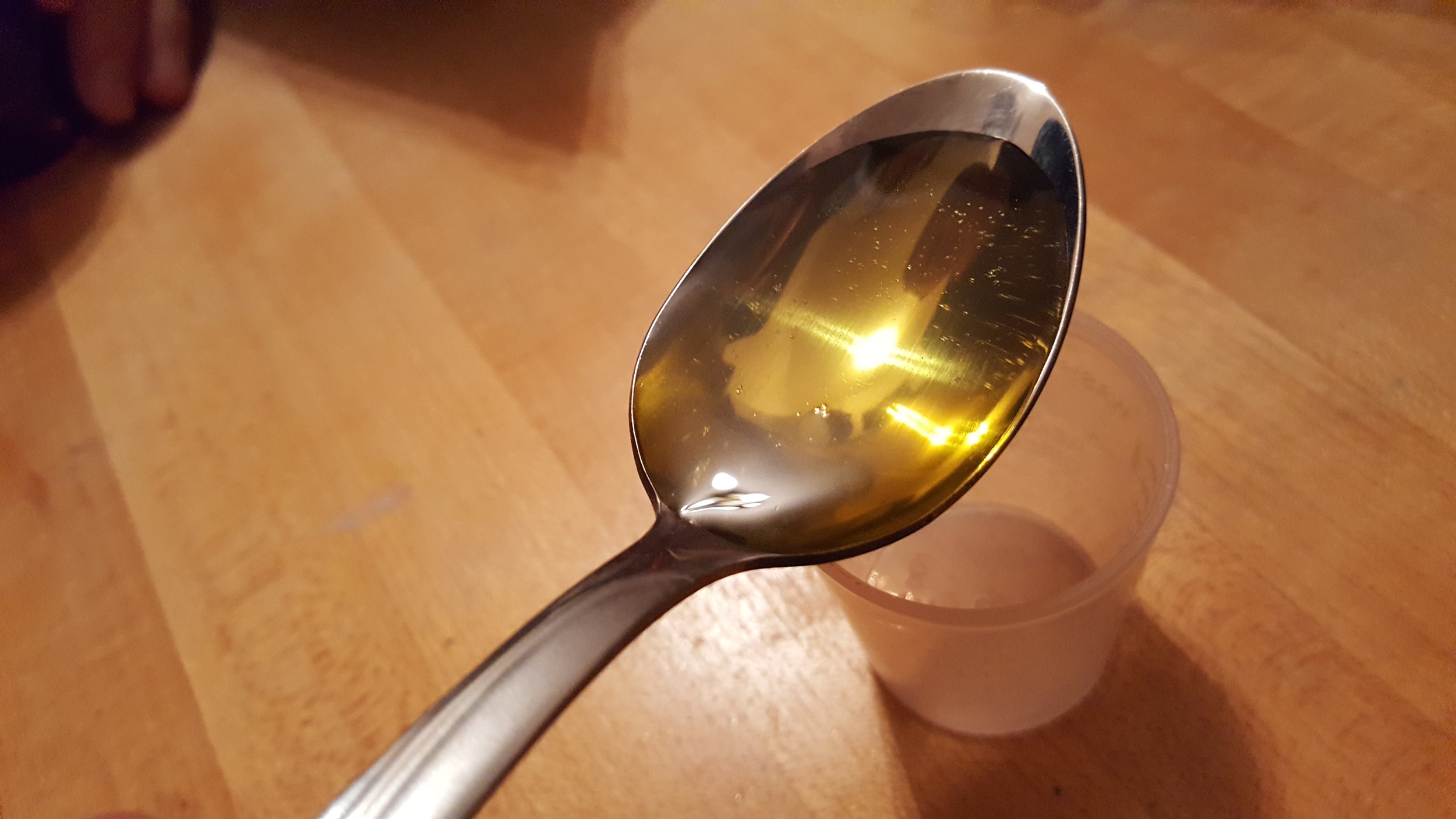 Cannabis syrup, or tincture, is one of three forms of the medicine available to Weinstein’s patients.
Micah Danney/Herald
By Micah Danney

Sitting behind the wood desk in his small office, his glasses perched on his nose as he speaks in a gentle, soothing tone, 82-year-old Gilbert Weinstein is the picture of the traditional American physician — except for the bright green marijuana leaf patch on his lab coat.

Weinstein practiced medicine for decades at his office in Hewlett, just over the Valley Stream border. He served patients from all over the area, including many from Valley Stream. In April, he sent a letter to his patients announcing his decision to leave traditional medicine.

“Unfortunately, my ability to render proper and comprehensive medical care for you has been severely compromised, and I will close my practice in internal medicine, endocrinology and nuclear medicine effective July 1, 2016,” he wrote.

The news came as a shock to many, including Valda Passione, of Valley Stream. “He’s one of the best doctors I ever had,” she said, noting Weinstein’s thoroughness and clarity of communication about her health and his prescribed treatments. Passione, a nurse for the U.S. Department of Veterans Affairs, said she has yet to find a new doctor.

Valley Stream resident Joan Dollinger, 71, said she was “sick” to learn that she would not be able to continue seeing Weinstein after more than 25 years as his patient. “He is the most fantastic doctor you will ever meet,” she said. “He’s an old-fashioned doctor who is on top of everything new.”

Harry Denni, 75, of Lynbrook, echoed those sentiments. He was referred to Weinstein 45 years ago. “People said he was the best; phenomenal,” Denni said. “He was the second coming of — well, I better not say that, I’m Jewish.”

The closing of Weinstein’s practice left Denni “dumbfounded,” he said. “I lost people in my family to death who didn’t affect me like this,” Denni said. “That’s what this man means to me.”

Weinstein, of Hewlett, started his career in medicine in 1965. For half a century, he treated patients using the best methods available, building a practice whose regulars revered him for his attention to detail and to each person in his care — never rushing them and never settling for less than the best he could do.

“I was trained to do no harm,” Weinstein said. “That seems to have flown out the window.”

In recent years, insurance companies started dictating what drugs his patients should take, he said. “Due to increasing insurance company and government intrusions and restrictions, it is impossible to continue practicing medicine as it should be done,” he wrote to his patients.

When New York state made medical marijuana legal for a handful of severe conditions in January, Weinstein started researching it. It hadn’t been on his radar before, but he read up on its history and clinical studies with the same thoroughness that he became known for among his patients.

Weinstein learned about the endocannabinoid system, the network of receptors in the human brain and throughout the central and peripheral nervous systems that interact with the marijuana plant’s two main ingredients, cannabidiol and tetrahydrocannabinol, or CBD and THC. He learned that the receptors are found in every tissue of the body, he said, and when CBD and THC are introduced, they help the body achieve homeostasis, or the biological equilibrium that is elemental to good health.

Marijuana used to be accepted as a medicinal plant. It was first regulated under the federal Pure Food and Drug Act in 1906, then steadily criminalized throughout the country, with outright prohibitions enacted in the 1920s and ’30s. Its advocates have long protested its illegality but were considered a fringe element by the federal government and mainstream society.

As he read everything he could find, Weinstein developed a reverence for the plant. He also joined the Society of Cannabis Clinicians, a nonprofit organization that educates physicians about the medical use of cannabis. “There is no disease now known to man — none — which traditional medicine is failing [to treat], or traditional medicine is so overpowering in terms of its side effects, that cannabis does not … affect positively,” he said. “We have yet to define the boundaries of this plant, if any.”

‘The information was suppressed’

As he learned about a system of the body that he’d never been taught about, Weinstein became concerned about why the information wasn’t made available earlier. Researchers in Europe had pioneered the first modern studies of marijuana as a medicine in the last half of the 20th century, but laws in the U.S. were slow to adjust, and still are.

“I believe the information was suppressed,” Weinstein said. He noted the influence of insurance and pharmaceutical industry lobbyists on politicians, and major shifts in medical care away from private practice and toward hospitals and urgent care centers — neither of which, he said, provide the personalized attention on which he built his practice. Hospitals make more money by increasing their volume of patients — hospital administrators often use the word customers — so there is an incentive to treat people and get them out the door as quickly as possible.

“The truth of the matter is, what used to be an art … has become a business,” Weinstein said.

His new program is simple: Patient can qualify for treatment with cannabis if they have cancer, HIV/AIDS, ALS, Parkinson’s disease, multiple sclerosis, spinal cord damage, epilepsy, inflammatory bowel disease, neuropathies or Huntington’s disease. After a consultation, and if qualified, a patient can begin Weinstein’s program for an initial fee that covers around-the-clock access to him. He prescribes the treatment forms allowed by the state: capsules, syrup or oil, which can be vaporized. Patients then fill their prescriptions at a dispensary. As their treatment continues, they are required to be re-evaluated monthly — a requirement that critics call arduous and arbitrary.
Weinstein has six patients enrolled in his program, and another four are considering it.

Lawrence resident Susan, 57, is one of them. She asked that her last name not be used due to the stigma that continues to surround marijuana. She was being treated at Memorial Sloan Kettering Cancer Center for a brain tumor. It was removed in November, but the pain it caused didn’t go away, and she was diagnosed with chronic intractable pain syndrome.

Susan said she thought medical marijuana might help, but the hospital wasn’t certified to prescribe it. She found Weinstein on a list of certified doctors in New York and contacted him. “I told Dr. Weinstein that when I was 19 I had a bong, and I would get high and I would eat a pint of Haagen-Dazs,” she said. They discussed how the treatment could address her pain, and she started the program. Weinstein worked with her to determine what he calls her optimum dose.

“The motto in cannabis medicine for anyone using it intelligently and properly — you go low, you go slow,” he said.

They started low, then doubled the dose on the fourth day of her treatment. Susan said she felt like she was stoned, so they lowered it a bit and found the right level. She had been taking 16 15-milligram oxycodone pills per day — enough of the powerful opiate to render a person without a tolerance unconscious. The pills had become so regular that she felt cravings. “I used to watch the clock, like, is it time yet?” she said.

After two months, she had cut her opiate intake in half. The cravings subsided, she said. While she still suffers from severe pain, medical marijuana has proven to be an effective tool to fight it. Susan said she is thankful to Weinstein for providing it. “I think the world of him,” she said. “I only wish I met him sooner. He is an extraordinary human being. Quote me on that.”

Bob Gaver, 79, of Hewlett, has been a patient of Weinstein’s for more than 40 years. Weinstein advised him that medical marijuana might address the pain he feels throughout his body. After two months in the program, Gaver said, the pain has decreased, he feels less weakness in his legs and has less difficulty sleeping. Gaver is slowly increasing his dose and hoping for continued improvement. He does not feel any side effects, he said.

After doing a lot of his own research, Gaver said, his attitude about marijuana has changed. He still has reservations about its recreational use, but he said he has become more open-minded about what it can do for people physically. He finds the continued resistance to the drug in many parts of the country frustrating.
“My feeling is that most of the states in this country have their head up their ass,” he said. “Are they just afraid that they’ll lose some votes? They aren’t helping people who need it. This state is very rigid … I’m hoping that they will increase the period without prescription.”

Weinstein said he has no interest in the recreational use of marijuana. He sees the drug as an answer to a serious addiction problem. “There’s an opioid crisis in the country, created by monsters,” he said, pointing at himself. “We created it. Doctors.”

Cecily Haramis is the director of the chemical dependency program at New Horizons Counseling Center in Valley Stream. The crisis and its causes are made evident to her every day. “A lot of the people that we see say they start out with pain medication,” she said. “That usually escalates to heroin use.”

Pain medication is expensive and hard to find without a prescription, Haramis said. “The physical addiction of opiates is like nothing else that we’ve seen … The psychological obsession lasts a long time after that.”

As people run out of medication, they resort to stealing it from others, raiding their relatives or friends’ medicine cabinets. That behavior progresses to more serious criminal activity like larceny and burglary. “As the disease progresses, so does the severity of the crime,” Haramis said.

The opioid epidemic can’t be overstated, she added. “I’ve been in the field over 20 years,” she said. “Honestly, I’ve never seen anything like this. The number of people dying is unbelievable, and it’s young people. It truly is an epidemic.”

For Weinstein, that’s all the more reason to push exploration of the clinical applications of marijuana. “It is an amazing plant,” he said. “We’re dealing with a genie coming out of a bottle.”