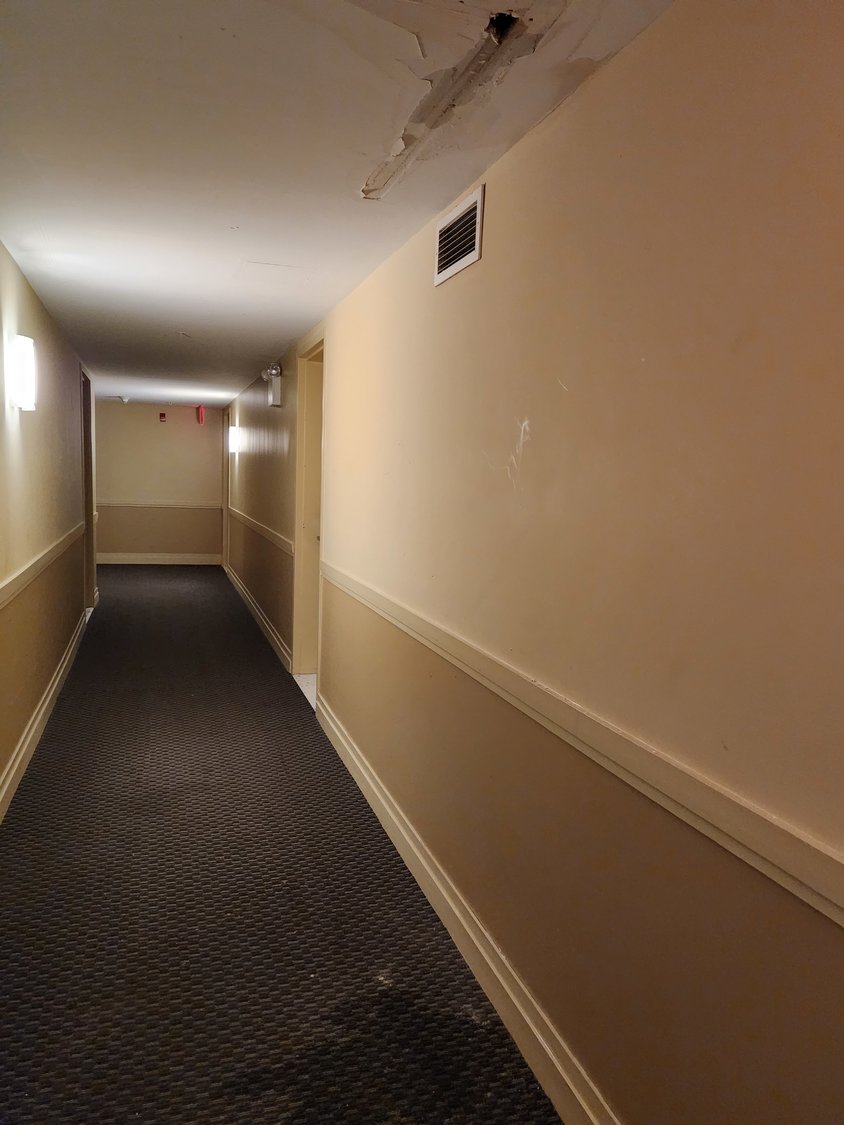 A leak in the ceiling outside an apartment is one of the many concerns residents have with the building’s infrastructure.
Roksana Amid/Herald 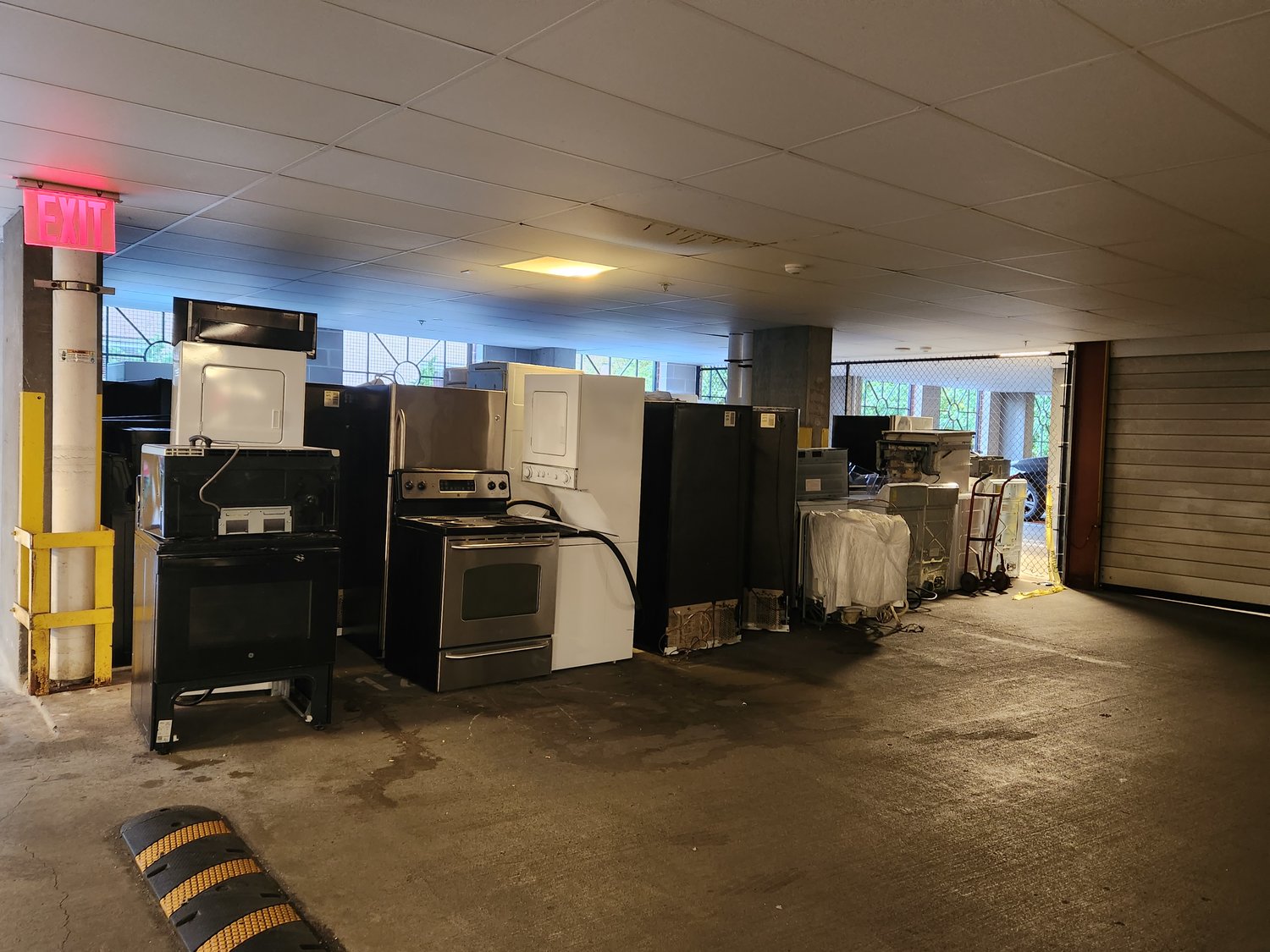 Fairfield metro Residents complain that appliances from renovated apartments that are stored in the garage limit parking space.
Roksana Amid/Herald 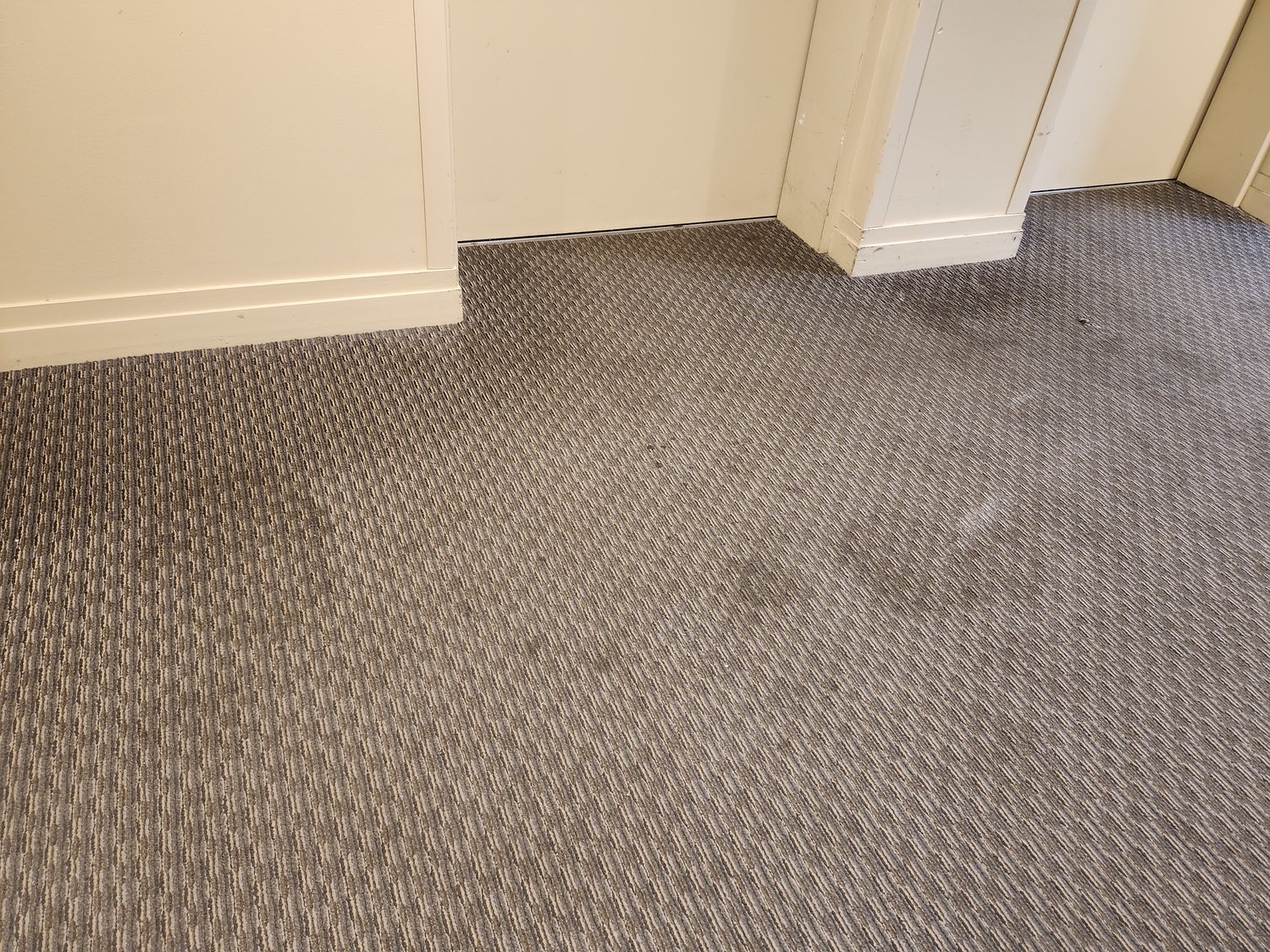 A dried urine stain in a hallway of the complex, which residents can’t avoid walking on.
Roksana Amid/Herald
Previous Next
By Roksana Amid

Lynn Calcaterra recalls feeling a wave of exhaustion while putting her belongings on the kitchen counter of her Fairfield Metro apartment. She wasn’t feeling well after a breast cancer treatment. When she reached for a protein shake to ease her fatigue, she realized she was being watched.

Out of the corner of her eye, Calcaterra saw a mouse sitting in the drain of her kitchen sink. “My first instinct was to scream,” she said.

Calcaterra, who doesn’t sleep well on the nights after she receives treatment, said that her encounter with the mouse, in April, had only worsened her physical and mental state. It wasn’t the only time she had seen mice in her apartment. And she isn’t the only resident feeling stressed over the unwelcome rodents.

Since March, residents of Fairfield Metro, on Glen Street, say they have submitted multiple service requests on the Fairfield portal, an online resource used to address issues in the complex and for paying rent. Residents say they have also called customer service  representatives and maintenance workers. pleading for help.

Residents Jasmine Fell and Ilan Levin said that Fairfield was unresponsive, so they both mailed certified letters to the corporate office in Melville, and still received no response.

At press time, Fairfield had not responded to multiple calls and emails from the Herald requesting comment. A visit to the corporate office on Sept. 20 was also unsuccessful, with a Herald reporter denied entry past security. When a representative was reached that day by phone, officials did not address the mouse problem or other concerns residents have raised, from stained carpets to leaky ceilings to appliances from renovated apartments taking up parking spaces in the garage.

Numerous residents said that Fairfield offered them minimal help, and left them feeling as if their concerns were not being taken seriously. When it comes to the mice, it’s common for residents to receive sticky paper mouse traps from the complex to combat the problem.

Several residents who spoke to the Herald insisted on anonymity, fearing retaliation from Fairfield.

At one point, Levin said, he asked if the building’s exterminator could look for entry points in his apartment that mice could possibly crawl through, but he was told that the exterminator doesn’t provide that type of service.

“I asked them to at least move the fridge and the stove (to) just see if there’s any mice there,” Levin said. When the building’s concierge contacted Levin, he was informed that the exterminator’s responsibility is only to set traps. Levin was further advised to pray he doesn’t see any more mice.

Levin said that living at Fairfield has caused him and his wife anxiety.

“We’re scared to walk around our apartment and see mice walking and crawling around,” Levin said. “We’ve barely been using our stove because that’s where I’ve seen a lot of them, in the kitchen.”

Many renters on Long Island come across the name Fairfield Properties at some point during their apartment search. That’s because the Melville-based company owns 13,260 rental units, which is roughly about one-fifth of all units in private apartment buildings on Long Island. Fairfield spent more than $2.12 billion on properties since 2013, and recently acquired the former Avalon complexes of Glen Cove in 2021.

Calcaterra said that since Fairfield took over, she feels the complex has taken a downward spiral. “I can’t believe with the amount of money we pay in rent that we have mice,” said Calcaterra. Her base rent for her two-bedroom apartment is $2800. And she pays $70 in common fees per month.

Fell said Fairfield markets itself as a luxury apartment complex but residents pay for a premium that barely meets expectations. Since the infestation, she has spent $200 of her own money to combat rodents in her apartment.

“It’s amazing that they can get away with these things and rent apartments out at such a high price,” Fell said.

The infestation of mice in her apartment led Fell to give her registered emotional service dog, Tito to her parents because she was worried about potential interactions the dog would have with the mice. She’s also avoided one of her closets, because she suspects that mice are living there.

“I’ve blocked them in because I don’t even want to know what’s in my closet,” Fell said. She checked on her closet once only to find it full of mice feces.

“I just hope Fairfield doesn’t try and retaliate with all of us speaking out about the issue that’s going on.”

Building an intergenerational bridge with reading

Clear Stream students give thanks to board members