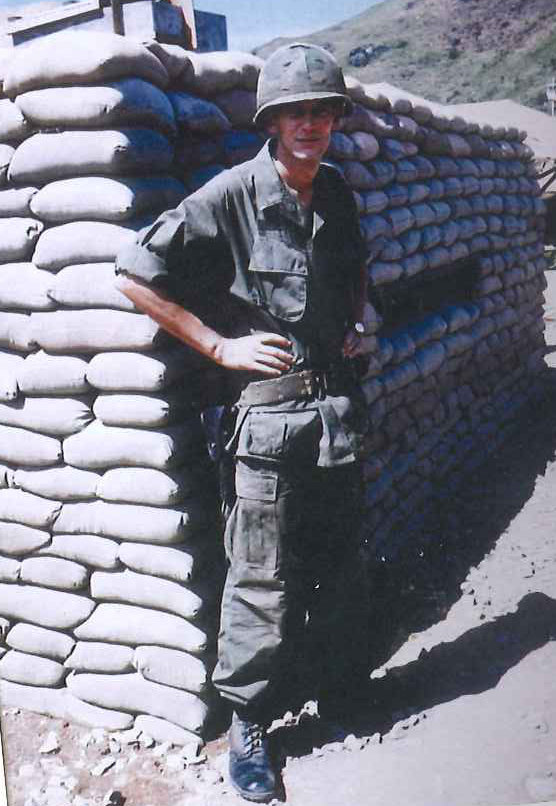 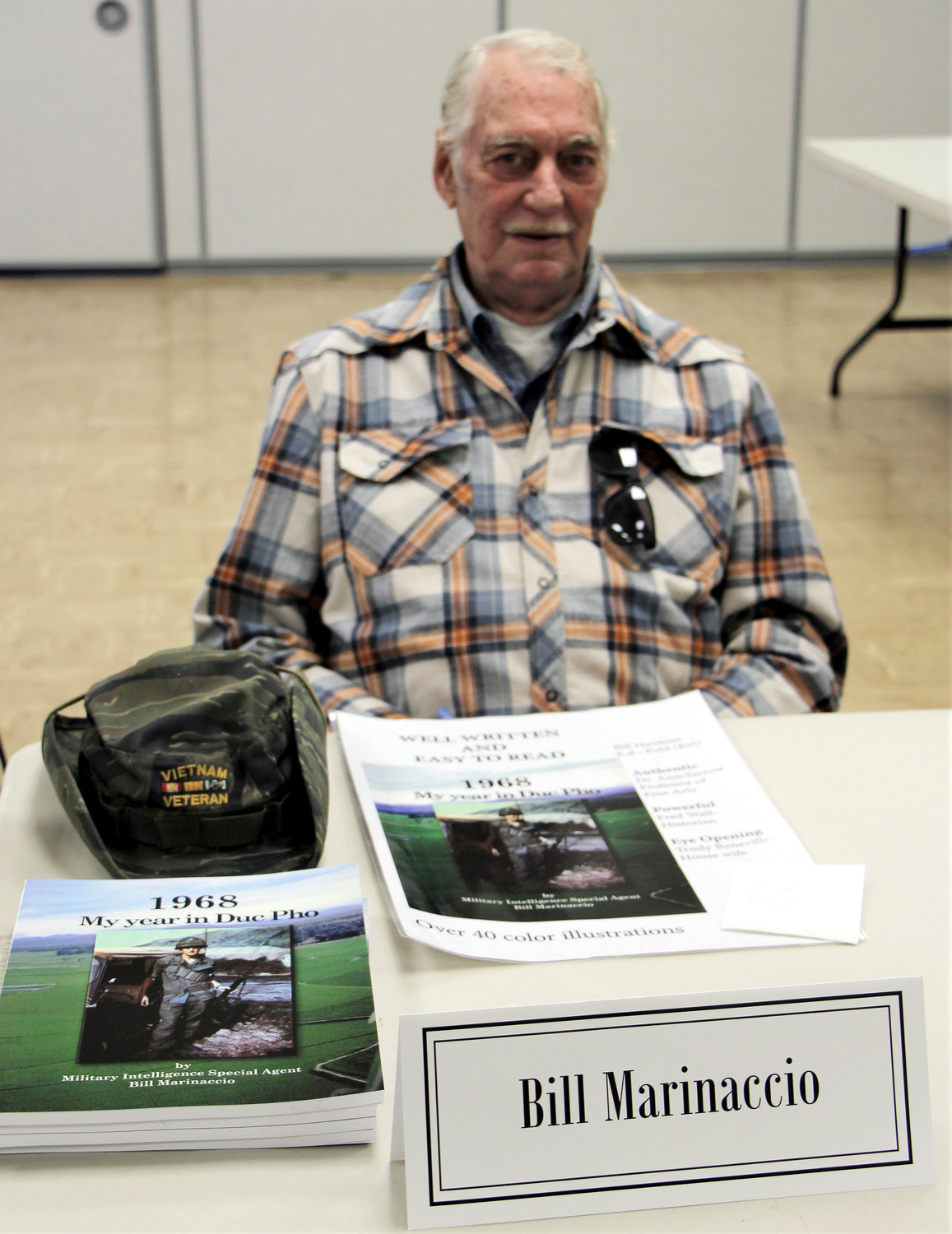 Marinaccio with his book, “1968: My Year in Duc Pho.”
Maureen Lennon/Herald 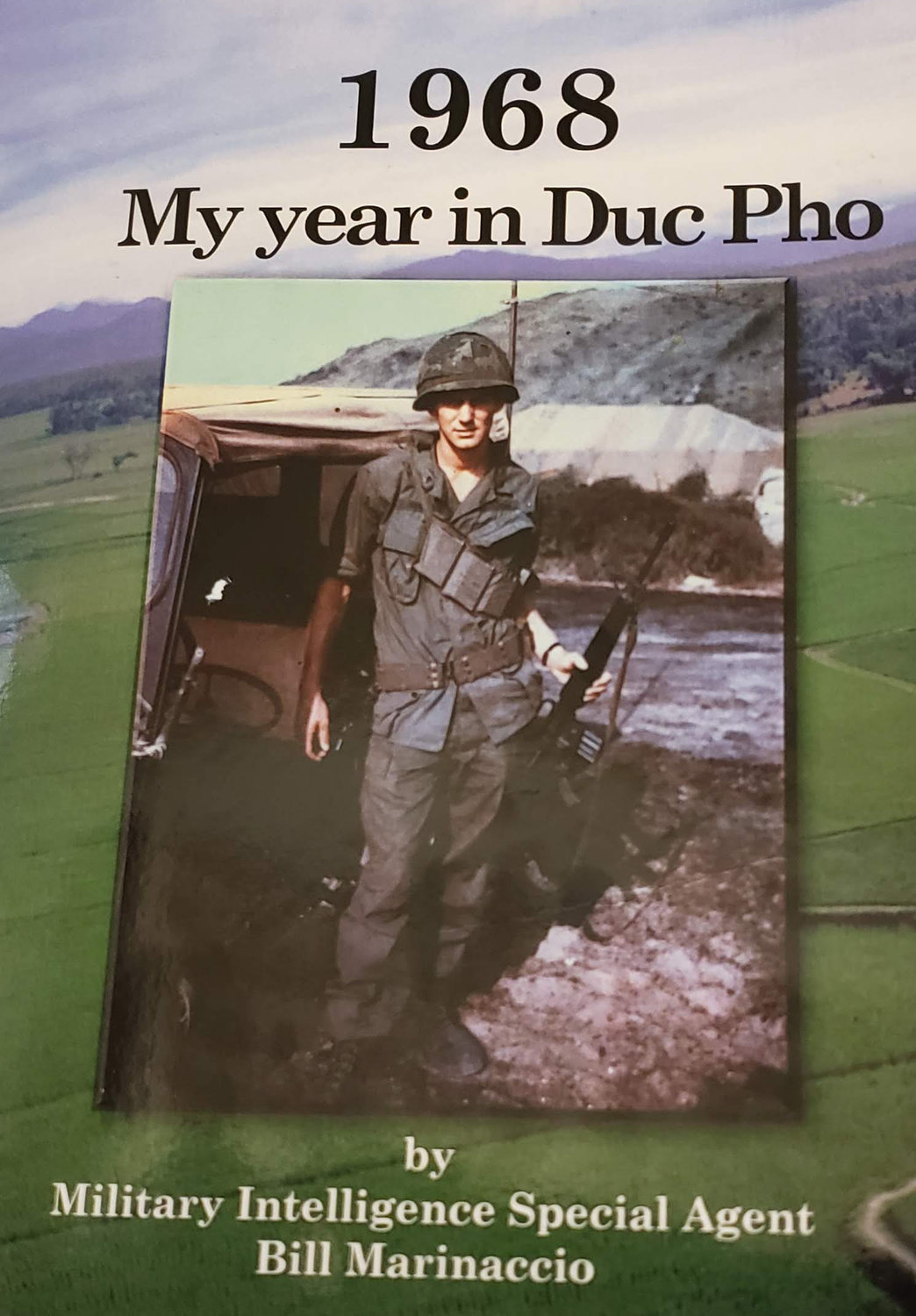 When I came back from Vietnam, it was all a blur.”
Bill Marinaccio, Freeporter
Where veterans can get help

There was no avoiding the nightmares. They came nightly. For years William Marinaccio struggled, but he kept them to himself. It was what he was supposed to do as a Vietnam combat veteran, he thought. But in 2017, when he wrote his memoir, “1968: My Year in Duc Pho,” he finally made peace with the memories of war that had lived in his head for five decades.

Marinaccio, 76, a Freeport native, did everything he was supposed to. He went to school, did his school work, worked every summer as first mate on his father’s charter fishing boat, and in April 1966, when he received his draft board notice requiring him to report to New York City for induction into the Army, he did what he had to do.

He was 23 and a student at SUNY New Paltz when he was called to fight in the Vietnam War. Determined to figure out his options before responding to the draft board, he met with a number of recruiters. An Army recruiter told him that he qualified for military intelligence.

“The Army was the only one that really gave me real options,” he said.

He passed the test at the Fort Hamilton Military Intelligence Group and a background check, and he headed off to war. He went to boot camp at the Army Intelligence School at Fort Holabird, in Baltimore, for four and half months, and in January 1967, he finished the school and became a counterintelligence special agent.

In total, including boot camp, he served for two years, seven months and 10 days, and was honorably discharged in 1969. When he returned home, he said he wasn’t welcomed back. He couldn’t wear his uniform, and life had to carry on, as if he had never been to war and seen the horrors that he had.

“When I came back from Vietnam, it was all a blur,” Marinaccio said.

He eventually got married, raised a family and kept busy by working what he described as “odd and sometimes random” jobs, from selling boats in Island Park to chartering fishing boats alongside his father.

“I know every inch of the New York Harbor,” he said with a smile.

He knew he had to do something about his Vietnam nightmares, but he didn’t know where to start. “I’d try to recall something,” he said, “but then I’d try to forget.”

In late 2008 and 2009, he started attending the Nassau County Vet Center in Hicksville, taking part in the different groups, meetings and programs there. According to Marinaccio, Alice Psirakis Diacoasvvas, a readjustment counselor at the center, told him to “write everything down” that affected or changed him in Vietnam.

“It was the beginning of my book,” he said. “While I was over there, I knew I had stories to tell . . . I wanted to let my family and friends know what I did.”

Once he started writing “1968: My Year in Duc Pho,” his memories started to become clear. He went through his collection of photos, and drew pictures of his memories for which there were no photos, as Psirakis told him to do. His memoir is filled with photos of his fellow soldiers, and the drawings are images of combat.

Throughout the book, there are stories of the people he met, his missions and the fight for his life. At the core of the book is his post-traumatic stress and the details of anxiety-filled nightmares. The book includes extremely intense chapters, like “My Longest Day,” “The North Vietnamese Captives” and “Five O’clock Charlie.”

His nightmares are gone. He can finally move on. And he is writing another book.

“My English teachers would be extremely surprised,” Marinaccio said with a grin. “I had so much trouble in English class.”

According to John Frias, founder of the Valley Stream nonprofit, Battlefield Disciples an organization that helps veterans recover from combat, many of those who fought in Vietnam still have a tough time dealing with their combat experiences. Not everyone makes peace with those experiences, Frias said.

Frias is a former Marine who served in Operation Iraqi Freedom from 2002 to 2007. Unlike Marianaccio, when Frias came home, he was welcomed by everyone. “Our country took us back,” he said. “We were appreciated for our services.” But like Marianaccio, he, too, had to readjust.

Finding a sense of purpose became Frias’s next quest. By joining a group of veterans who practiced mixed martial arts, he said, he found a common bond of shared experiences. “There was a level of trust and shared interest,” he said. “It was a place to have a common interest, and I was more willing to lay down my guard.”

The services and programs provided by Battle Disciples, the Vet Center and other veterans programs, according to Frias, “provide a place to have a group of guys that they can call upon, depend on and share their issues and troubles. It’s about having a band of brothers.”