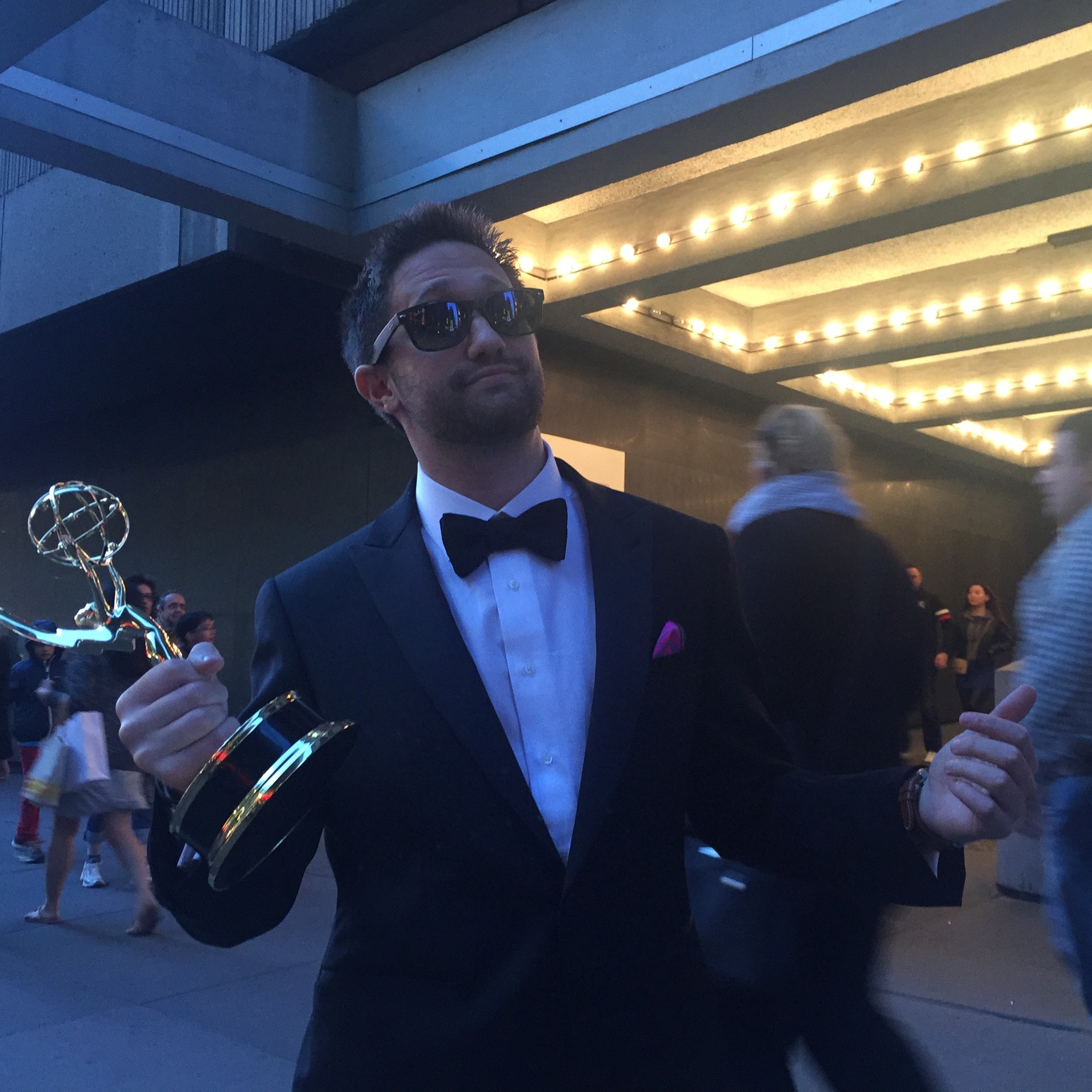 Woodmere native Tyler Gildin after he received his New York Emmy for a video he and Elite Daily produced on the life of Atlantic Beach resident Oliver Miller.
Courtesy Tyler Gildin
By Jeff Bessen

Class clown, satirical viral video with friends, stand-up comic and now as director of video for a website, Woodmere native Tyler Gildin has put his creative and humorous talents to work.
Gildin, 26, and his team at Elite Daily, was awarded a New York Emmy earlier this year for a video that chronicled the story of Atlantic Beach resident Oliver Miller, 15, who suffers from severe seizures compounded by blindness and developmental delays that stem from a seizure he had prior to his birth, and his mother, Missy, who campaigned to make medicinal marijuana legal in New York state. The oil form of marijuana could be used to reduce the frequency and severity of the seizures.
“We actually had set out to do a much larger documentary on marijuana legalization in general, with Oliver’s story being a small component,” Gildin said. “But once we interviewed Missy and kept up-to-date with all she was doing, we knew we had to pivot and primarily focus on their story.” The state legalized medicinal marijuana in June 2014, but distribution has yet to begin.
“He and his team were amazing,” Missy Miller said. “They put me at ease immediately and asked such spot-on important questions! They really understood my son’s need for this and the toll that the fight was taking on our family.” The video includes the Millers attending the ceremony when Gov. Andrew Cuomo signed the bill.
Before Gildin covered serious subjects he was a cut up in school and received the requisite punishments from sitting in a corner to being sent to the principal’s office. His mother, Melissa Gildin, was called often, he said, and it was easier for teachers to get a hold of her when Tyler was in Woodmere Middle School as she is a teacher there.


“Tyler was always very good at interjecting into a lesson or diffusing uncomfortable situations in the classroom with creative humor, but not all of his teachers fully appreciated his ability to turn every situation into a joke or a one-liner,” Melissa said. He graduated from Hewlett High in 2007.
In August of 2010, Gildin got a taste of fame as a video he and three friends, Cody Milch, another Hewlett graduate; Evan Krumholz and Nash Prince, made went viral. “Nassau State of Mind” a spoof of Jay Z’s “New York State of Mind” parodied the Five Towns/Long Island lifestyle.
“It was a good taste of what the impact of online video could be,” Gildin said. “We were just four guys who wanted to make a funny video about where we grew up. We had no idea it would ever get as big at it did.” It spawned at least two response videos: “Suffolk County State of Mind” and “Jew York.”
After graduating from Syracuse University’s Newhouse School of Public Communication in 2011, Gildin said he went through the typical post-college discovery period after being turned down a job in radio. He did stand-up comedy, wrote screenplays and freelance producing and writing. A fraternity brother put him in contact with Elite Daily in 2012. He began as a contributor and was offered a full-time job a few months later.
Stand-up is on the back-burner, but Gildin’s future looks bright. He is engaged to Jericho native Zara Richman; an October 2016 wedding is planned. Gildin also has a vision for Elite Daily. “I want to continue to innovate our product and inspire my team to create engaging cinematic stories that can compete with the rest of the booming digital video community.”
Report an inappropriate comment