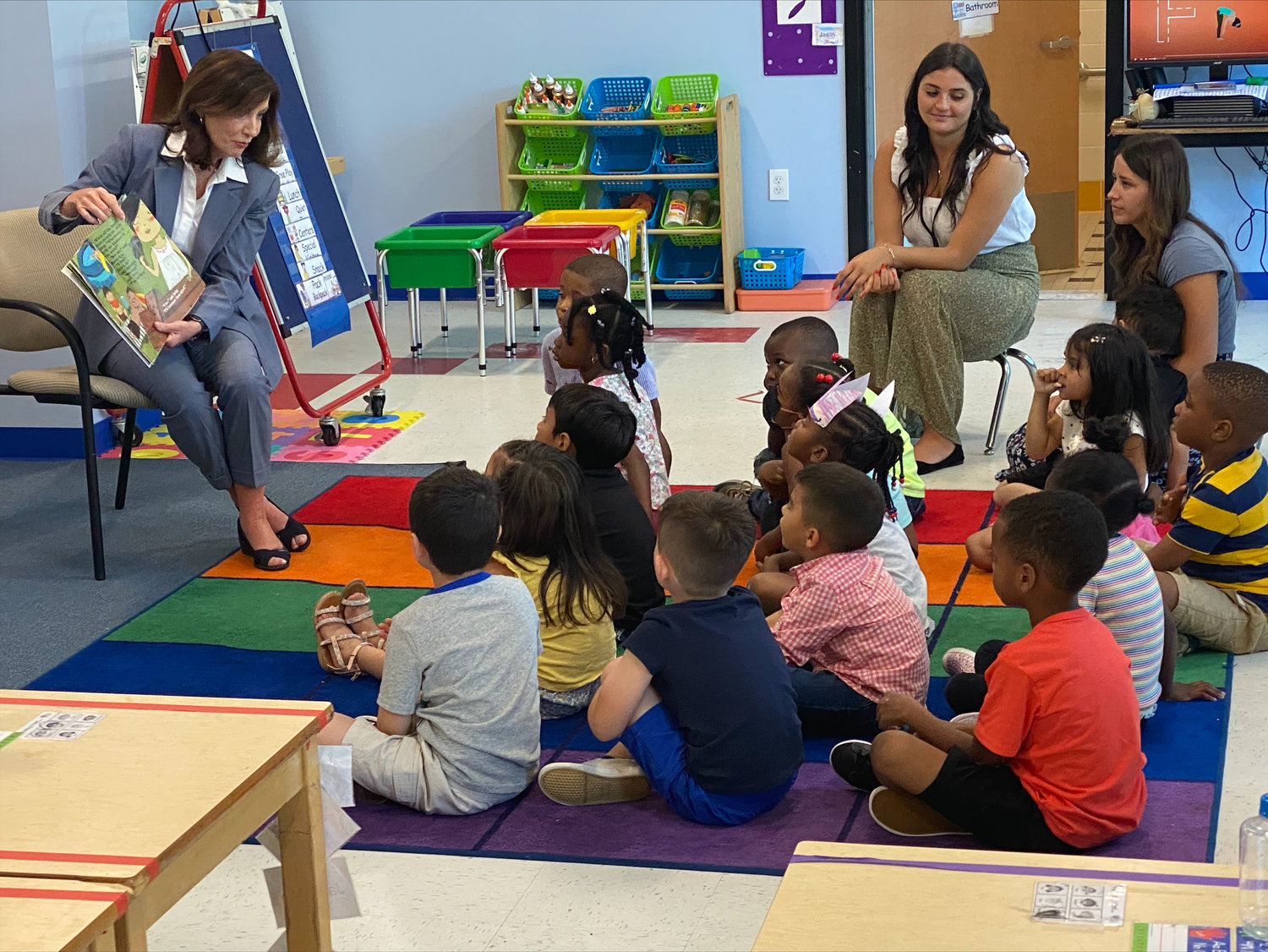 Governor Kathy Hochul was joined by a number of state and local politicians in her call to expand pre-K services.
Courtesy Superintendent Daniel Rehman

Before this past January, 50 percent of the children in this school district entered kindergarten without exposure to any kind of learning.”
Kathy Hochul, Governor
By Kyle Chin

Faith Tripp, the school’s principal, described how the pre-K program took off at the beginning of the year. “Students are chosen via a lottery system,” she said. “This past January, we opened our first classroom. Thanks to being fully funded, we can create five classrooms for the [2022-23] school year.”

The governor described how unfair it was for students not to be exposed to pre-K programs. “I made some new friends at the very first — the inaugural class — of the pre-K program,” said the governor. “These children literally won the lottery in the sense that before this past January, 50 percent of the children in this school district entered kindergarten without exposure to any kind of learning. That’s not fair to them. That’s not fair to their families, never to have this even available to them.”

Sen. Kaminsky said that while he and other legislators have pushed for expanded pre-K programs for some time, the introduction of universal pre-K to New York City schools increased their call for the same programs. “Long Island parents say, ‘New York City, just a few miles that way, has UPK. What about us?’”

Kaminsky further stressed how UPK can ease the time and money burden on parents, quoting them as saying, “’Do you know how much it cost me’ — and by the way these are the ones who could afford it  —  ‘to put my child in a private pre-K last year?’

“Now that they don’t have to pay that money, or now that they can go to work instead of being home, the economics changes completely for that family,” Kaminsky added. “And the studies show that those who start education early do better.”

According to the U.S. Centers for Disease Control, a large portion of brain development occurs in the preschool years, with children reaching 90 percent of their adult brain volume before age six. The CDC also found that early childhood education is associated with improved cognitive development, emotional development and self-regulation and academic achievement.

In addition, the CDC said early childhood education is associated with improved physical health, with those attending some type of pre-school having lower incidences of coronary artery disease, chronic pulmonary disease, cancer and obesity.

However, some studies have challenged the notion that preschool produces universal benefits. In a study published this spring in the journal, “Developmental Psychology,” researchers from Vanderbilt University studied the effects of Tennessee’s statewide pre-school program. While students who attended preschool were found to perform better up to third grade, beyond that their average performance began faltering.

National Public Radio’s Dale Farran, one of the study’s authors, cautioned against using the study to conclude UPK is ineffective. She pointed to Boston’s program, which has shown positive results in preliminary studies. Farran added that the localized nature of Boston’s program allowed for greater control over quality and other factors that can improve children’s experiences. Tennessee’s program is also only limited to low-income students more likely to experience adverse conditions outside of school, which could skew results.

In her remarks, Principal Tripp gave special thanks to school board president Karen Brohm for getting the school’s pre-K program off the ground.

“We’ve never had a pre-K here before,” Brohm said, “so the moneys for the UPK that we received through the works of Sen. Kaminsky and Assemblywoman Griffin and some of the other politicians that helped us out, gave us 53 seats originally. And then after the governor adjusted her budget this year, we were able to fully fund our pre-K, which is 90 [seats].”

The West Hempstead School District will receive a $237,600 increase from the state budget to fund the expanded programs. Nassau County is slated to receive an additional $26.8 million that will expand public school pre-K throughout the county by more than 4,200 seats.