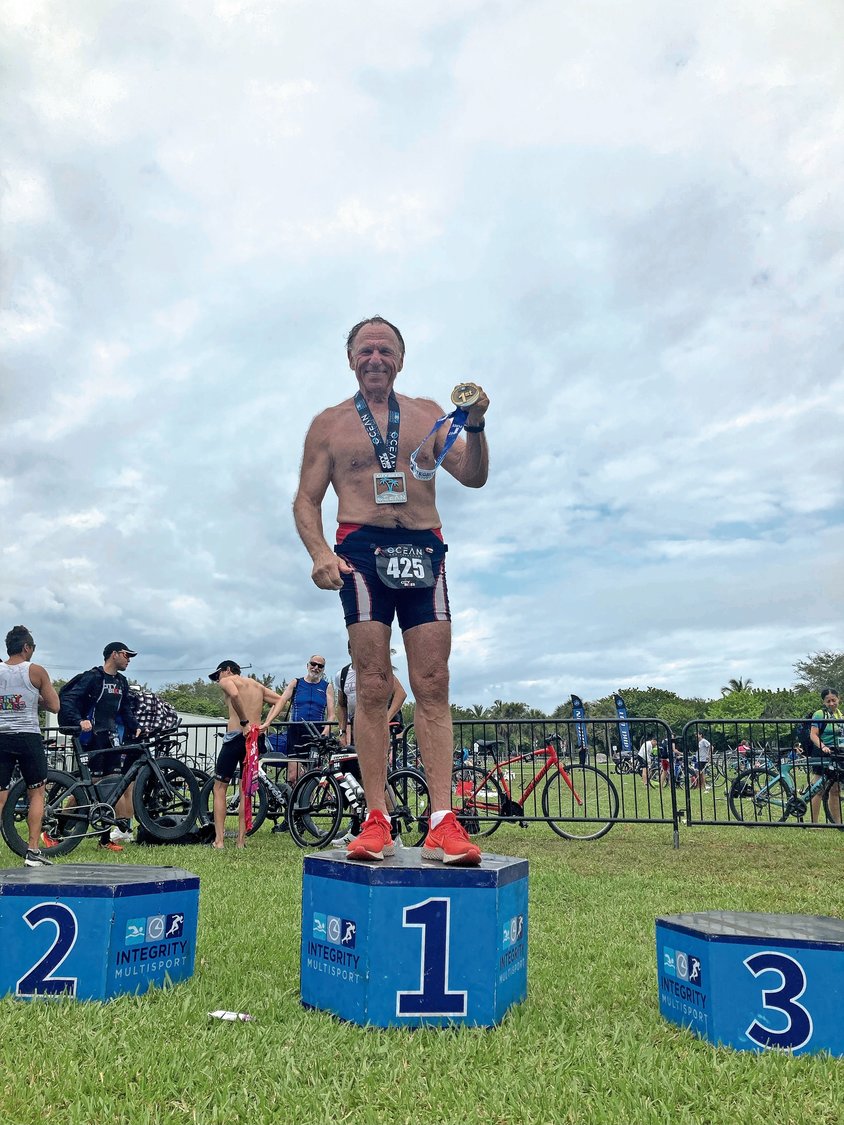 Hewlett resident Steven Greenberg, 75, will compete in the New York City Triathlon this Sunday. Above, Greenberg at a Miami event in April.
Courtesy Steven Greenberg
By Lisa Margaria

Call him the triathlon man. Steven Greenberg will compete in at least his 200th “tri” this Sunday — the 20th New York City Triathlon.

Greenberg, 75, a Hewlett resident for 52 years, has always been an athlete. He swam and played tennis growing up, and started running in 1975, when he was in his late 20s. “Around 1980, this crazy sport called triathlon started,” he recalled, “and it sounded interesting. So I embarked upon it. And here I am — what is it? 42 years later.”

He took part in his first triathlon with no preparation or training. This summer, he plans to compete in eight of them, including the 20th Verizon New York City Triathlon’s Marquee Race on Sunday.

He is the only person who has participated in every New York City Triathlon, according to a release by the triathlon’s owner and producer, Life Time.

“This is not what I do for a living,” Greenberg, who owns a real estate consulting company, said. “This is by choice — and I love it.”

He realized early on that triathlons require specific training and preparation. He spending at least an hour every morning running, biking or swimming, he said.

“For me, it’s a joy,” Greenberg said. “I get up every morning and I can’t wait to go out and either run or bike or swim. I absolutely love it. … I’ve always enjoyed the satisfaction of exerting myself — perspiring. And I never did any of this because I was going to live longer, you know, I did it for the quality of life today. I feel great today.”

Though he has trained with a group in the past, “At my age, 75, most of my contemporaries have stopped competing,” he said. “They’ve had hip replacements and knee replacements, you know — they’ve died, unfortunately. So over the years, I just kept going, and it’s me and my little iPod, playing the Doobie Brothers.”

Greenberg said he looks forward to seeing familiar faces at races, people who have competed along with him over the past 20 to 30 years. “As that group gets smaller,” he said, “I think the camaraderie gets stronger.”

Because the distance of triathlons varies, “the longer the distance the more training I have to put in — but I’m in pretty good shape,” he said. “So I’m able to knock them off one after the other.”

Steven’s wife of 53 years, Louise, says that the annual New York City tri is very important to him. And as is the case with almost every event he enters, she will be there to cheer him on. In years past, when the field of competitors was smaller, Louise would write him messages in chalk on the 59th Street Bridge.

“I give him all the credit in the world for sticking with it and being as successful at it as he’s been,” she said. “And I’m very proud of it.” She added that their marriage has been successful because he runs.

“Whenever he was in a bad mood, going back 50 years ago,” Louise recounted, “I would hand him his sneakers and say, ‘Go running.”

Greenberg’s post-triathlon recovery? “Two Diet Cokes,” he said. He is “pretty tired but I’m not wiped out,” afterward, he said, and usually wants to go for a swim soon after a race and watch some television that night.

Still hungry to compete
He is extremely competitive, and plans to race — and place — in all of his triathlons. Triathlons are scored by gender and age group, and he’s in the 75-and-over group.

“I pride myself that I’m usually first — occasionally second,” he said. “I can tell you that when I come home second, I’m in a miserable mood,” he laughed.”

When results are published at the end of a race, Greenberg likes to see how he finished not just in his age group, but overall. “I get a real thrill at being higher up among the entire field,” he said.

During a race, passing or beating younger competitors is a personal victory, he said. Triathletes have their ages written on their calf with a marker, so they can know, at least during the biking and running legs, if the people near them are in their age group.

“I get a big kick when I pass a younger person, and they see my age on my calf and they go, ‘Oh my God,’” Greenberg said with laughed. “Sometimes on the bike, I’ll come up behind somebody and I’ll gently say to them, ‘Get ready, an old man is about to pass you’”

Though Greenberg is successful in his chosen sport, “There is no evidence in my home that I’m a triathlete,” he said. “But if you went into the garage, there’s all kinds of trophies and plaques and bicycles and running shoes.” It’s not a man cave, but rather a triathlete cave, he joked.

His morning training is about mental relaxation, he said, but during a race he’s on high alert, “thinking about everything.”

“I believe that to be a successful triathlete, you need to be pretty intelligent,” he said, “because there’s a whole host of things going on.” Transitioning from one leg of a race to the next — from swimming to cycling and from cycling to running — takes planning, forethought and practice. “How fast you do that is part of the accumulated time,” Greenberg noted.

During the race, he has to be mindful of his surroundings, too, whether it’s race markers — like buoys in the water that swimmers must make their way around — the athletes around him, or environmental factors — like water current during the swim and hills during the bike and run — all while pacing himself.

“So it’s sort of a metronome in my head,” he explained. “Balancing this entire act throughout hours and hours of competition.” His race this weekend will take roughly three and a half hours.

Final preparation
On the morning of or the day before a race, he lays all the gear he’ll need out on the floor or on his bed — running and biking shoes, water, Gatorade, race number tag, socks, swimming goggles, bike helmet. It fills a backpack that he takes with him, weighing about 40 pounds.

When a race is over, Greenberg feels a huge sense of accomplishment, especially because there are a multitude of obstacles that factor into triathlons — rain, cold water or high seas during the swimming leg, high temperatures like those predicted for this weekend in New York City, and bike tires that go flat.

“When I’m done, the first thing I’ll say — and I’m not ultra-religious — is, ‘Thank God,’” he said, adding that he is pleased when he knows he did the best he could. “I promise you I gave 110 percent out on that race course. And then I just kind of bathe in the satisfaction that it’s over. And I wait for the results.”

During the coronavirus pandemic, “for almost two years,” Greenberg said, “I ran every day. But not having races to challenge you, to challenge your body, we all suffered (from) that.” Although he was in shape during the time without triathlons, he wasn’t in competitive shape.

“2022 marks the 20th edition of the New York City Triathlon,” said Kimo Seymour, president of events at Life Time, the fitness conglomerate that produced the event, “and we are beyond excited to be back in full force.”

“Next Sunday’s New York City Triathlon is kind of like the Super Bowl for me,” Greenberg said last week. “It’s my big hometown race. I put a lot of extra thought, a lot of extra effort into it. So I bought a couple of new pairs of goggles. I’ll take them out to the ocean today. I’ll try them on and select which one I’m going to use. So I’m meticulous about this stuff.”