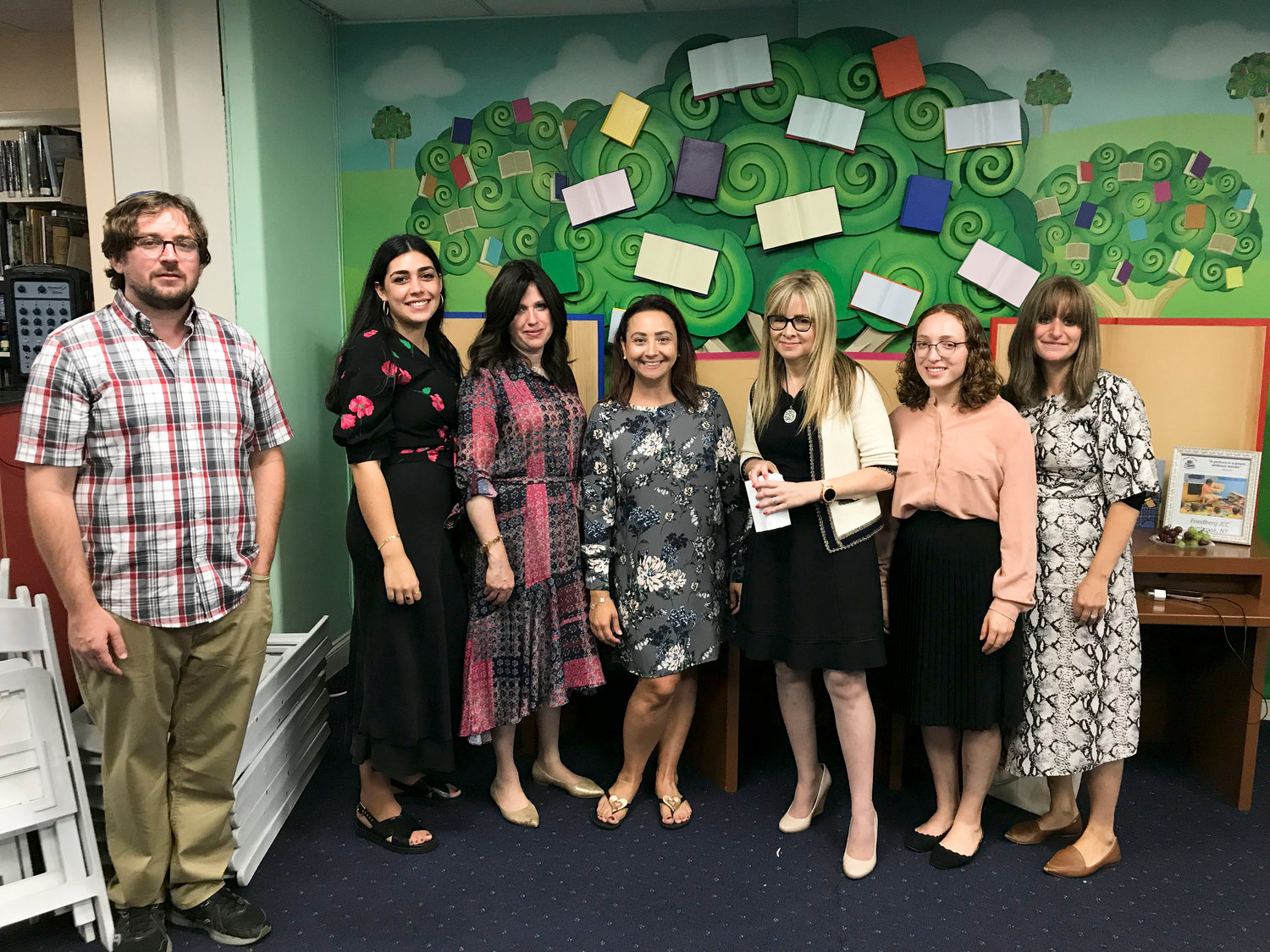 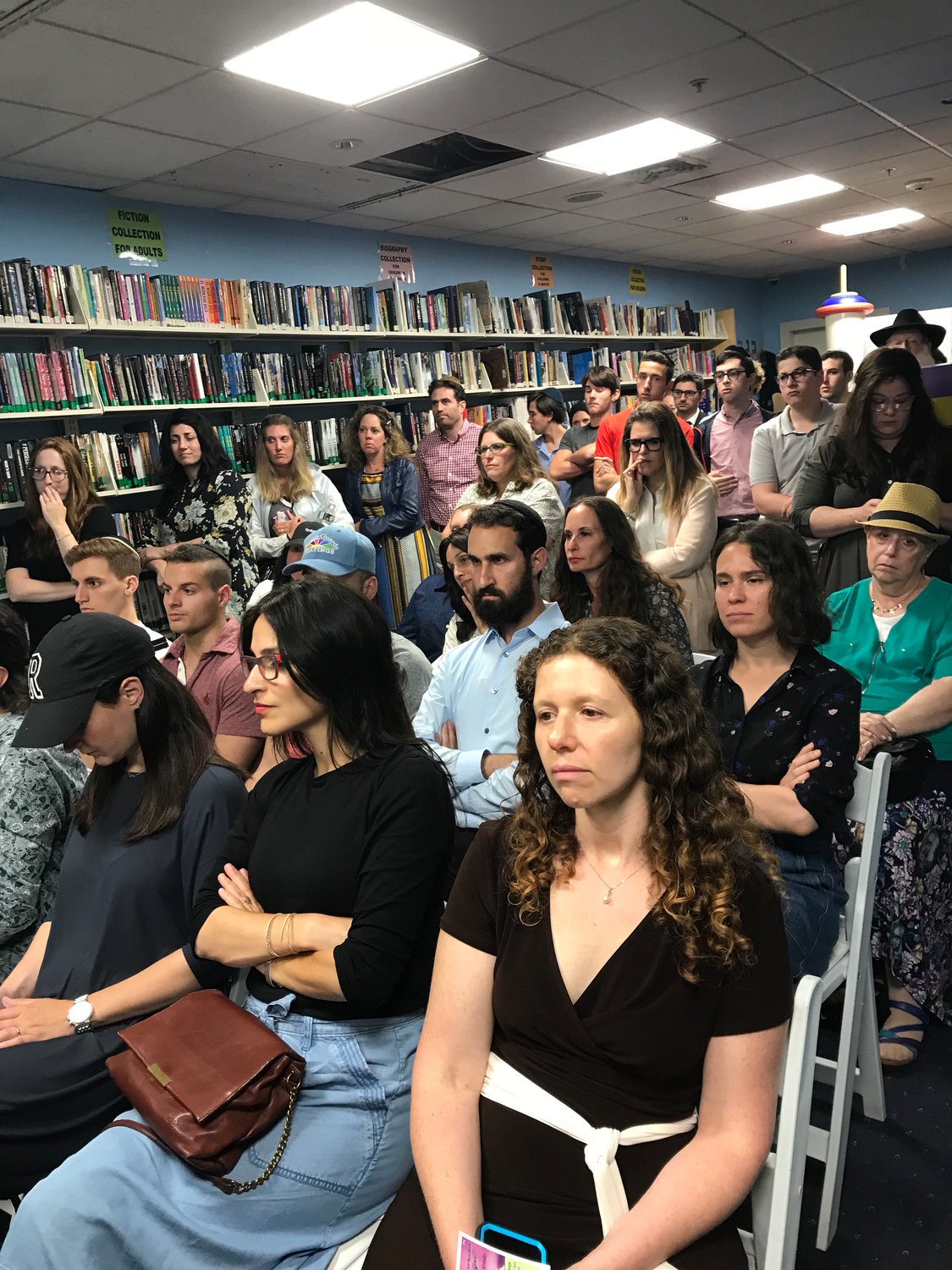 The Hindi Krinsky memorial led to somber moments of reflection for those who attended the Aug. 21 event.
Rachel Gottesman/Herald
Previous Next
Hindi’s Libraries book drops

Family and friends of Dr. Hindi Krinsky packed the Levi Yitzchak Library Center in Cedarhurst on Aug. 21 for a solemn yet celebratory remembrance of the Hebrew Academy of the Five Towns and Rockaway High School English teacher who died last August, and in whose memory a growing charity, Hindi’s Libraries, was created.

Krinsky, 32, a mother of five, was also the HAFTR High curriculum coordinator. Her husband, Cedarhurst resident Dovid Kanarfogel, and Leslie Gang, a former colleague of Krinsky’s, started Hindi’s Libraries to promote literacy by donating books to children in need.

“I learned from Dr. Krinsky never to shy away from knowledge,” said Miriam Kopyto, of Woodmere, a former student of Krinsky who was one of six speakers at the event. “No matter how crazy or new it seems, knowledge has power when learned right.”

Hindi’s Libraries has donated more than 30,000 books to 300 organizations across the country. “We kind of just fell into this project,” Kanarfogel said before the memorial. “Hindi loved literacy everywhere. She taught high school students, but her passion for literacy went beyond that. She wrote her doctorate on using comic books to teach kids to love reading.”

To honor Krinsky’s educational legacy, Kanarfogel and Gang began distributing boxes to collect children’s books on both HAFTR campuses — the high school, in Cedarhurst, and the early learning center, elementary school and middle school in Lawrence. “It started as a nothing project of 50 books,” Kanarfogel said. “The parents and students kept donating every day, and very quickly we had 500 books. And then it just didn’t stop.”

“We soon realized that this project doesn’t have to only span around the Five Towns, but it can span nationwide and internationally,” said Gang, who is now communications director and executive administrative assistant at the Brandeis School in Lawrence.
“Within a few days, we realized we could deliver to 20 organizations,” Kanarfogel said. “Within a month, we could deliver to 100.”

Books have been donated to adoption agencies, doctors’ offices, foster care agencies, homeless shelters, low-income schools, medical centers and outpatient clinics. “We’re partnered with several major companies that donate new books to us so we can give to hospitals,” Gang said. “We just created a library in the [Neonatal Intensive Care Unit] at the Cohen’s Children’s Hospital.” The companies include Barnes & Noble, Disney and Scholastic.

“She would love the literacy aspect,” Kanarfogel said of his late wife, who died after a brief illness. “She would love how easy it is to get involved, and she would love that it benefits underprivileged kids — kids outside our neighborhood and community.”

Gang encourages participation by anyone in the group’s effort. “We’re a small organization, so our funds, resources and manpower are very limited,” she said. “Hundreds and hundreds or organizations around the country contact us each week, telling us that they need books and they want them quickly. Figuring out how to efficiently get the books to the organizations while covering the costs is our next step.”

The rapid growth of Hindi’s Libraries surprised its founders. “This is something much bigger than what we ever anticipated,” Gang said. “We’re transitioning into bigger storage spaces, adjusting our timeline. We’re still an infant organization, but day by day we’re figuring out how to accommodate the donors as well as those in need.”

To donate books or to volunteer with Hindi’s Libraries, go to www.hindislibraries.com.