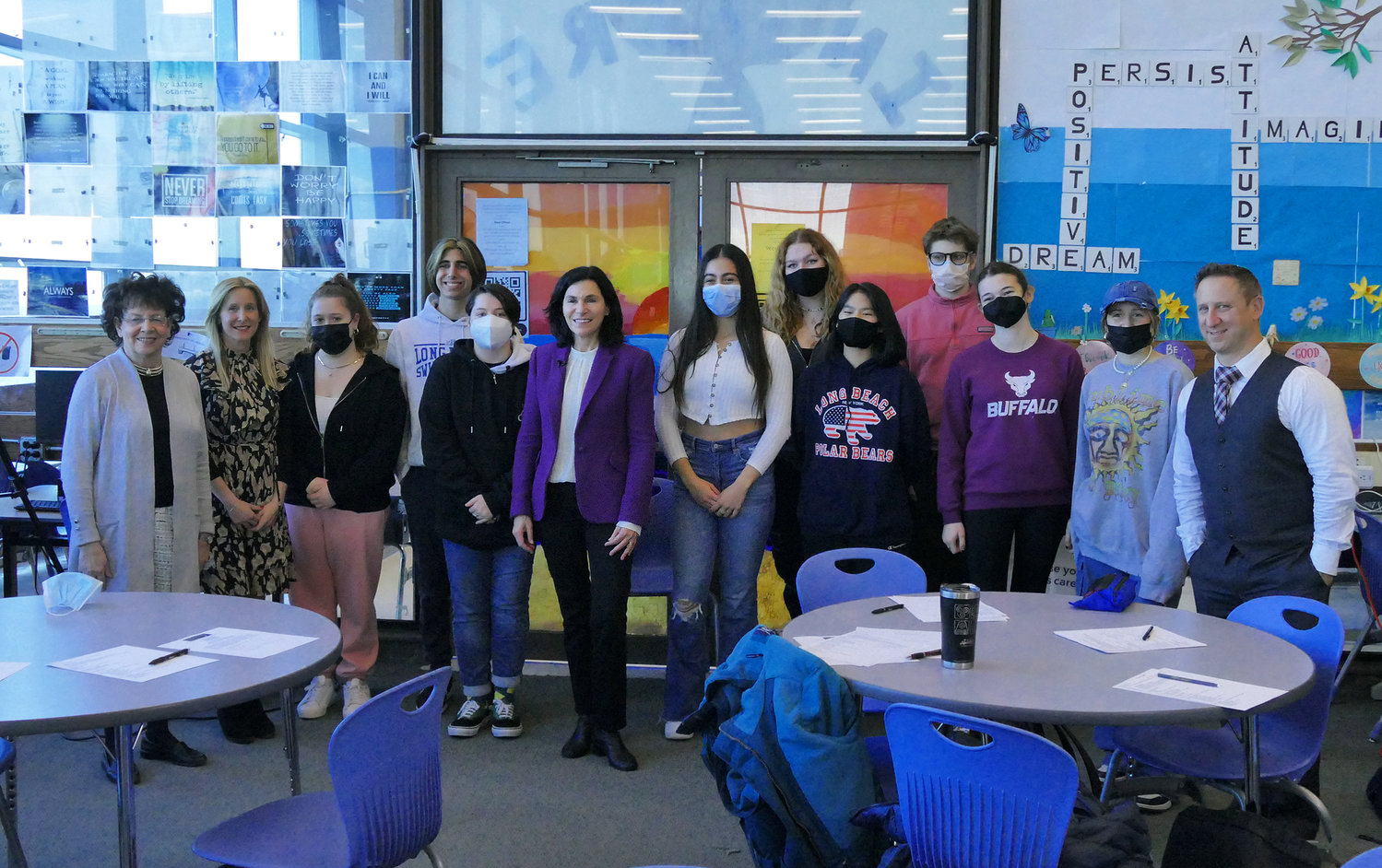 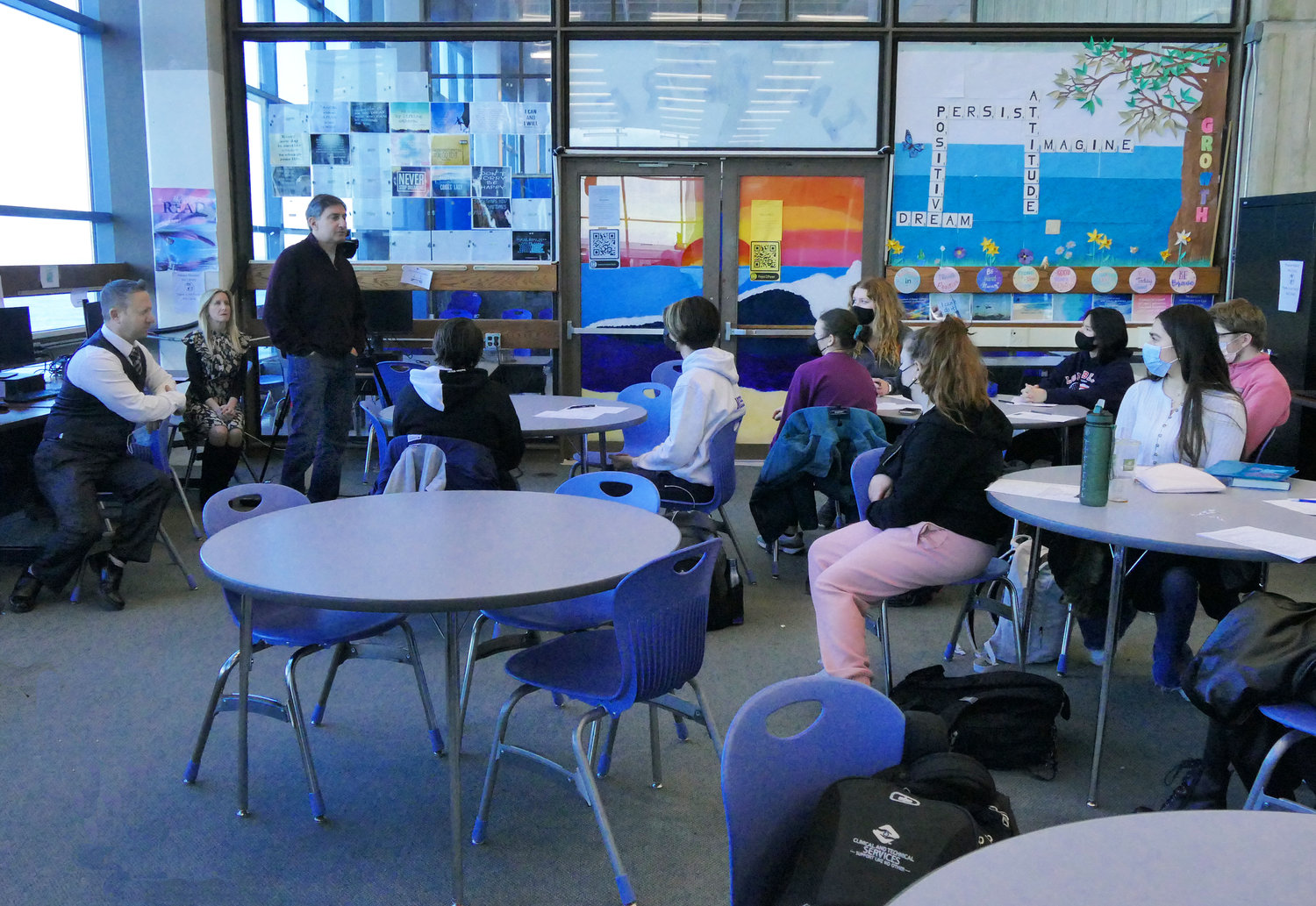 Students listened intently to speakers during their second session, learning of the Holocaust’s atrocities.
Joe Abate/Herald
Previous Next
By Brendan Carpenter

Ryder Moss has a family friend who is a survivor of the Holocaust, and the association has led the Long Beach High School student to want to know more about the genocide of Jews and others at the hands of Nazis, particularly since he has been thinking more about his cultural connection to his religion.

Moss, 16, is one of 10 LBHS students who have signed up for a program, called Names, Not Numbers, to learn about the death marches and the murders.

The program includes multiple sessions, the second of which was last Friday, and is in its second year at the high school. Along with the history, students also learn about interviewing techniques from Polly Leider, a CBS producer, to fully immerse themselves in a deep and meaningful, yet possibly uncomfortable, conversation with survivors.

“If it’s uncomfortable to hear or read, you need to know it,” said Dr. Matthew Morand, a psychologist at the high school. “One day, survivors may not be here and if we don’t know, how could we teach?”

The students will combine their interviews into a documentary called “Names, Not Numbers.” The program was started 18 years ago by Tova Rosenberg, the director of special programs at Yeshiva University in Manhattan.

“Six million Jews were killed,” Rosenberg said to the quiet room of students. “You’ll be talking to some that made it through, in all different ways. They were able to start their lives again.”

Each student is asked to compose about 50 questions for their interview, with 10 specifically about the period before World War II, 30 during the war and 10 after. Gail Rusgo, of Lido Beach, a teacher at the Hebrew Academy of Long Beach and one of the key components in bringing the program to the high school, said she has been “really pushing the agenda” and that it teaches beyond the Holocaust, informing about the “presence of stereotyping and propaganda.”

“I have learned a lot about human spirit,” said Moss. “Dealing with hardship is such a human thing that transcends time for generations and how people are still impacted today really opened my eyes.”

Some students aren’t new to the program, but just want to continue learning. Elliot Schenck, 17, took part in ‘Names, Not Numbers’ last year, but was eager for more.

Schenck said that the program has brought to light what the Holocaust “is and was and what happened to the people affected by it.” Schenck said students learn about it in school, but the ability to hear how it affected individual people, from survivors, is even more powerful.

Students will be conducting interviews during the next session. The students’ questions will be cut out of the film so it appears more like a fluent story, told strictly by the survivors. Last year’s interviews were combined into a documentary, and was shown on the lawn of the administration building in June.

Long Beach High School principal Jeffrey Myers said that the school is fortunate to have the program and that, even though it’s relatively new to students, it’s “creating a buzz.” Myers said he would like for it to be an every-year program, saying that it is a special event that students look forward to.