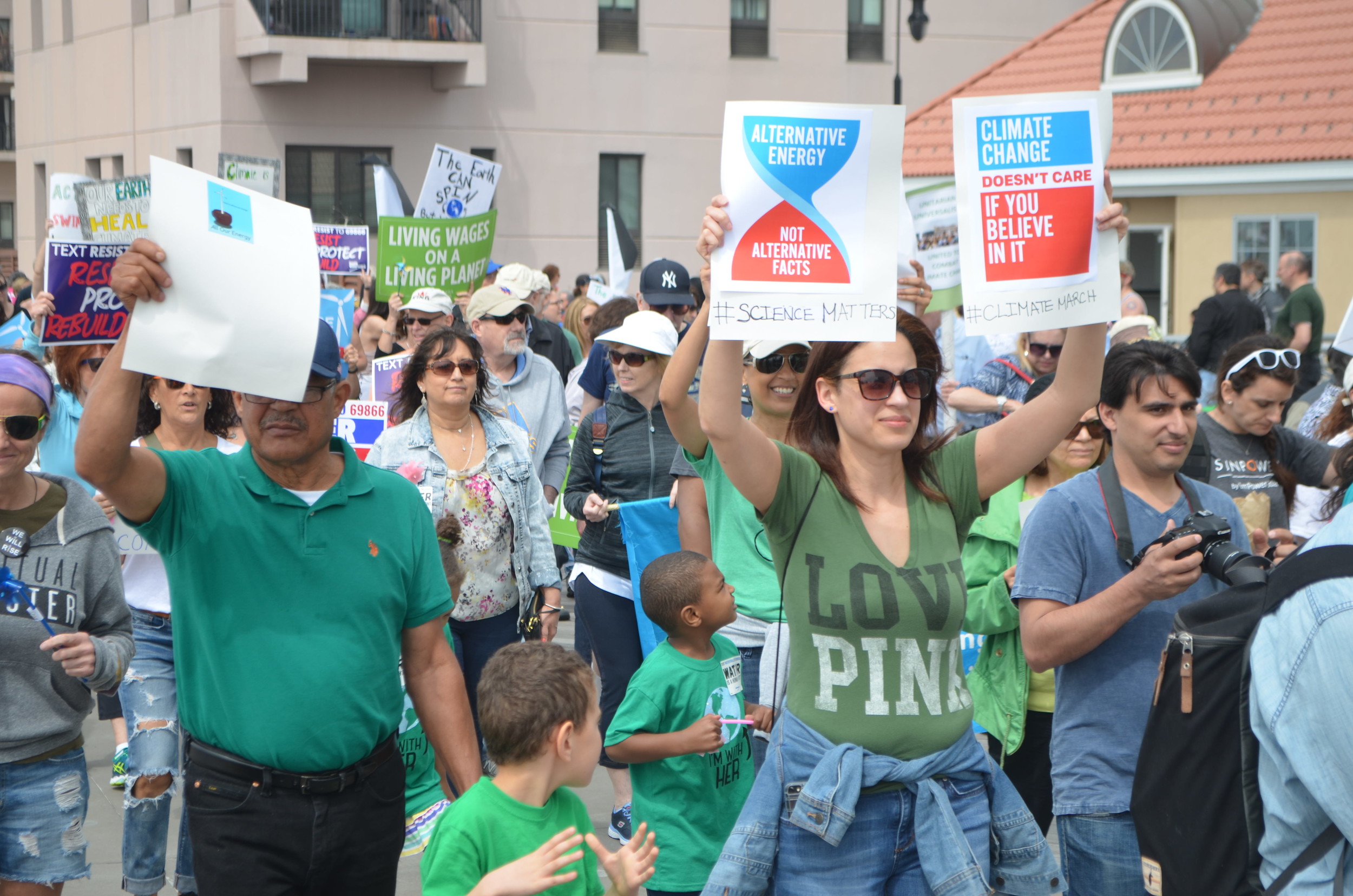 Hundreds of people gathered on the Long Beach boardwalk on Saturday to protest President Trump’s environmental policies and promote awareness of climate change. The march coincided with similar protests around the country, including one in Washington, D.C.
Bridget Downes/Herald 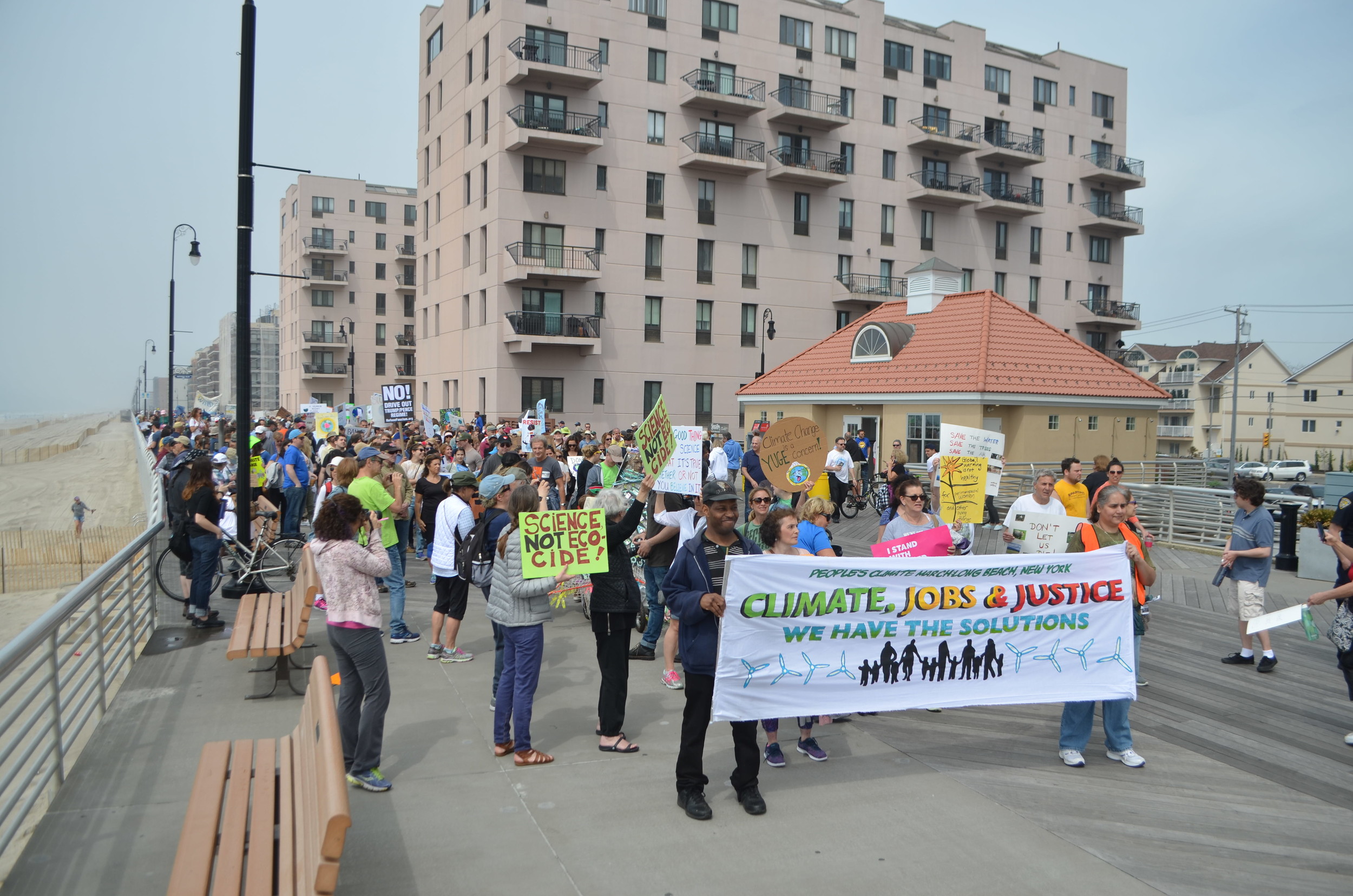 The march, which attracted about 700 people, began at National Boulevard and finished at the east end of the boardwalk.
Bridget Downes/Herald 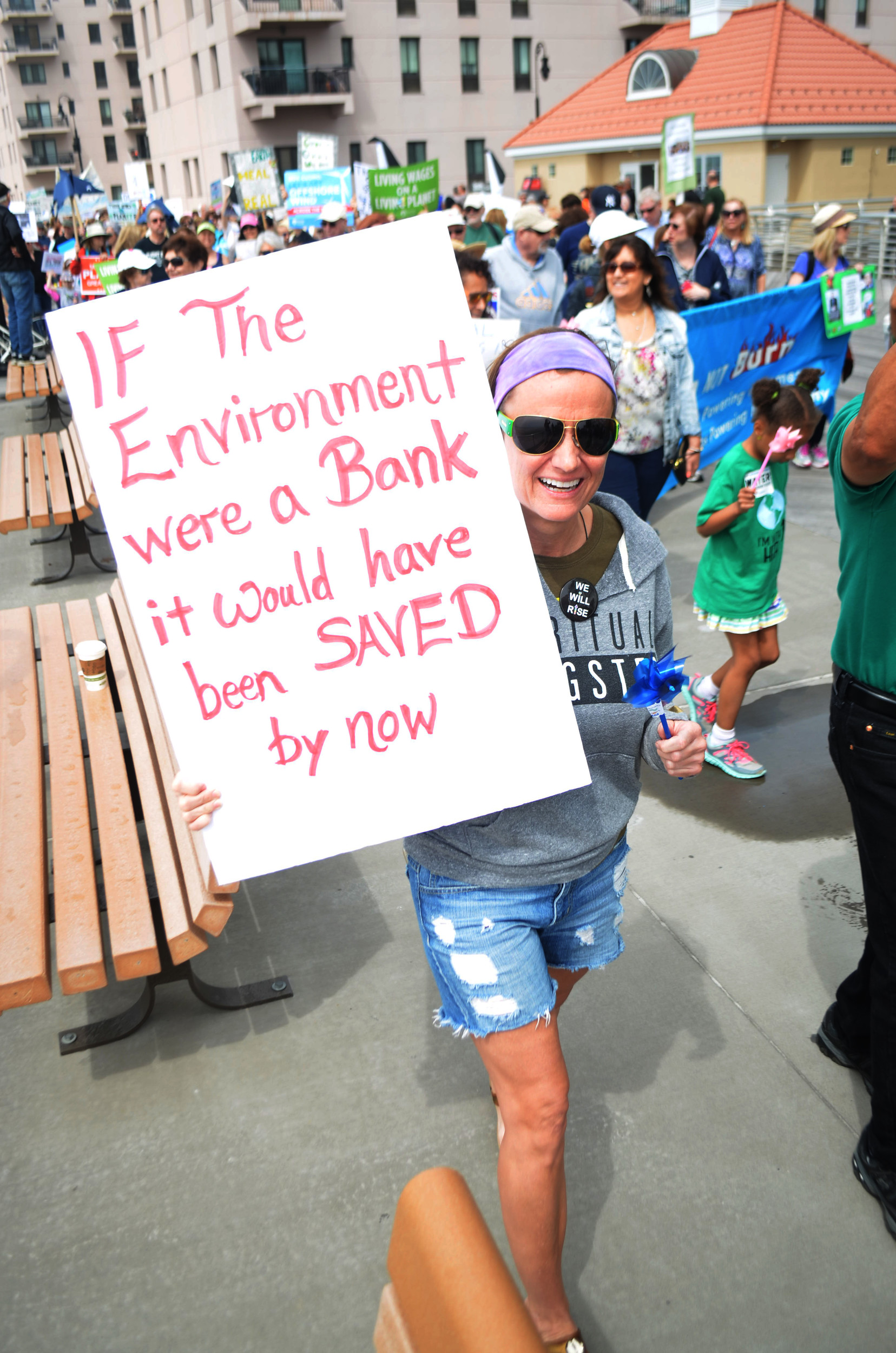 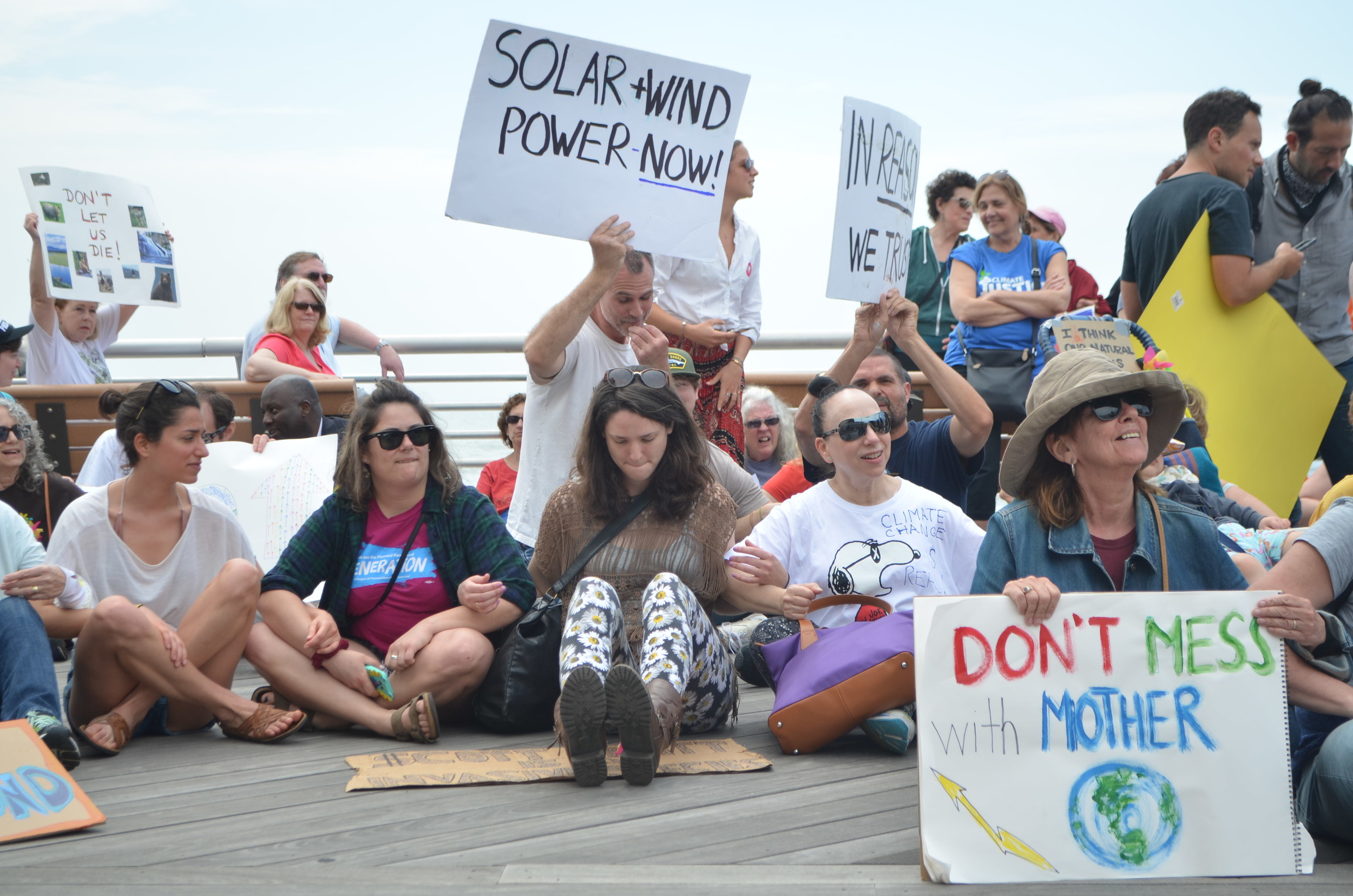 Organizers of the event asked protesters to sit down on the boardwalk, link arms and observe a minute of silence — as did participants in other marches around the country.
Bridget Downes/Herald 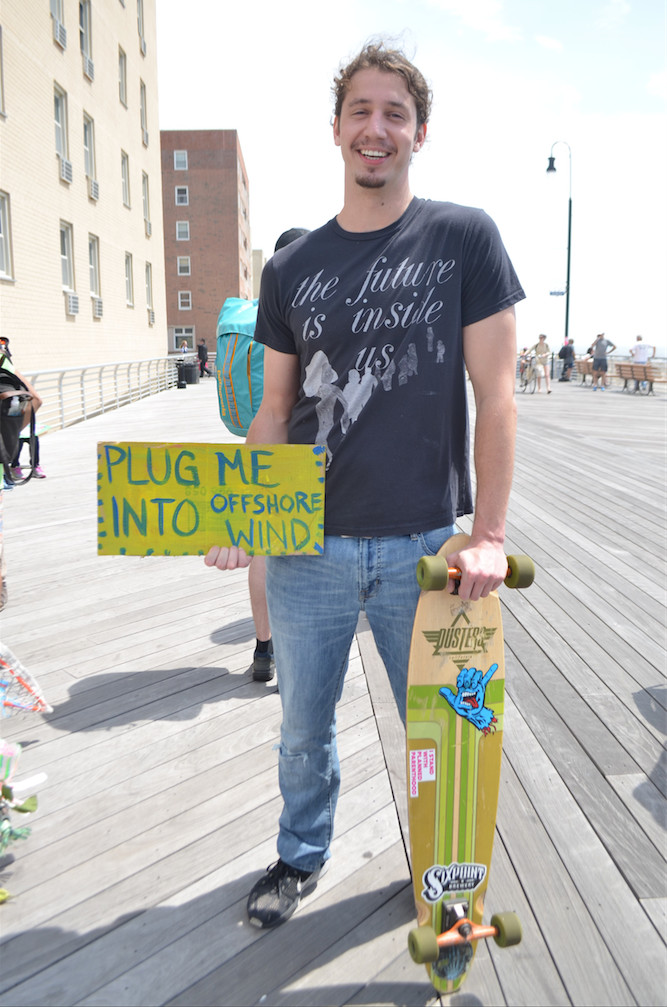 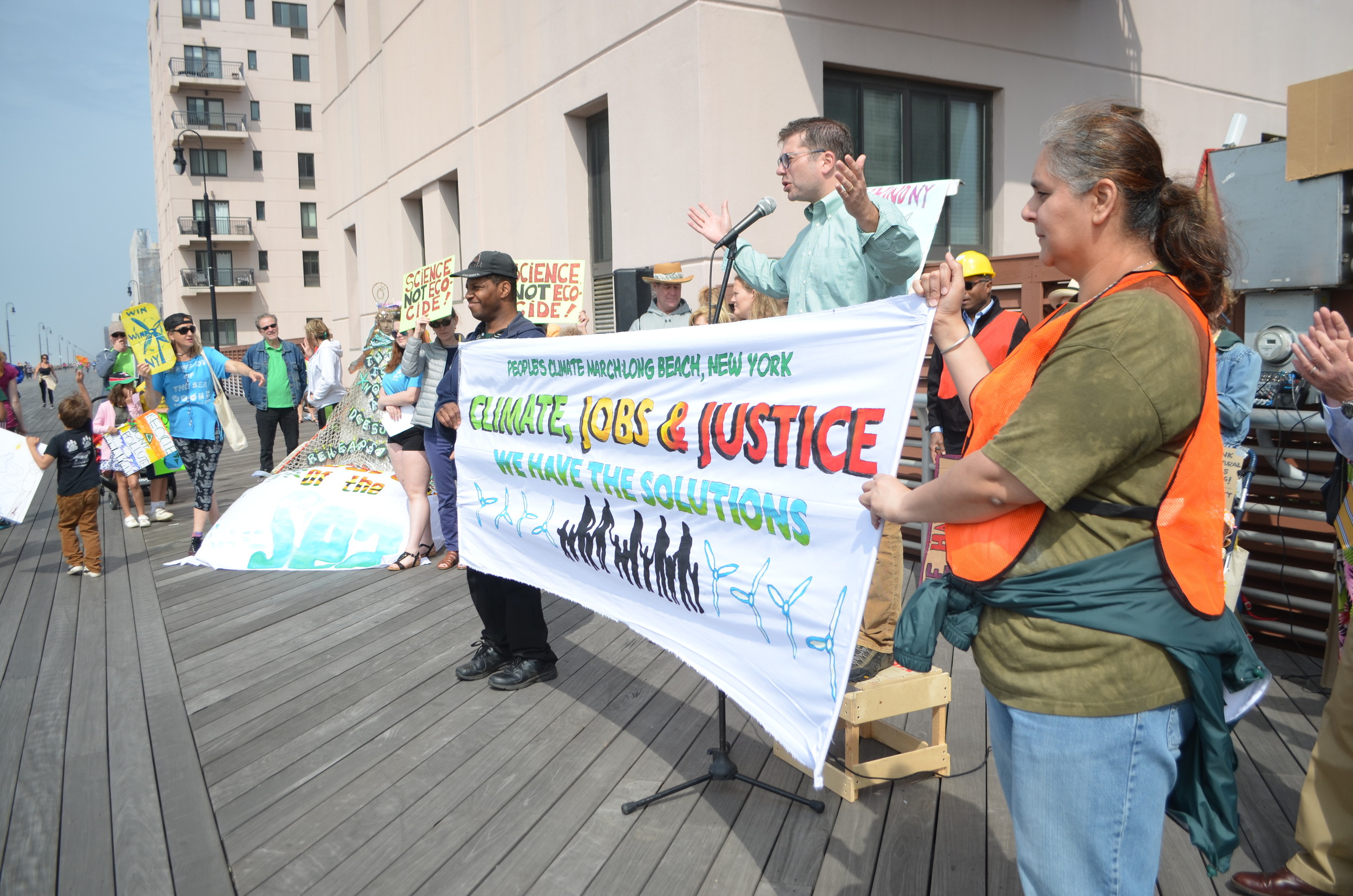 Hundreds of people gathered on the Long Beach boardwalk on April 29 to walk in a climate march to protest the Trump administration’s environmental policies, to spread awareness of climate change and to promote the use of renewable energy to replace fossil fuels.

The march coincided with a number of other protests around the country — including one in Washington, D.C. — collectively called the People’s Climate March. The demonstrations, a nation-wide resistance to President Trump’s rollbacks of environmental measures, including cutting the Environmental Protection Agency’s budget by 31 percent, took place on his 100th day in office.

“We are standing here today in solidarity with millions across the world who are doing the same thing as we are,” said Ryan Madden of the Long Island Progressive Coalition, which co-organized the event. “We are here today to march for climate, jobs and justice.”

Many organizations sponsored the march, including the LIPC, All Our Energy, New York Beyond Coal, Stewards of the Sea, New York Interfaith Power and Light, Sane Energy Project and New York Communities for Change.

“What better place for this today than here on our boardwalk, where we are at the forefront of the battle for climate change,” City Manager Jack Schnirman, a Democrat who is running for Nassau County comptroller, told the crowd before the march. “Where we know how important it is to protect ourselves from extreme weather and climate change.”

The march came a week after Earth Day, when residents gathered in Kennedy Plaza for a parade and other festivities, and the city gave away reusable bags in support of a new ordinance that requires Long Beach businesses to charge shoppers at least 5 cents for most carryout plastic and paper bags.

About 700 people marched from National Boulevard to the east end of the boardwalk, according to Long Beach resident George Povall, director of All Our Energy, a Long Island-based nonprofit environmental organization that supports offshore wind energy, community solar energy and ending the use of fossil fuels.

“We cannot allow further climate destruction and degradation to continue, and the people are standing up in a huge way to tell the politicians that it is time to act on climate,” Povall said. “The time to change is now, before it’s too late.”

“We want a clean-energy economy that works for everybody,” he added, “and doesn’t destroy the planet.”

State Sen. Todd Kaminsky addressed the protesters before they began marching. “I was proud to see so many Long Islanders take a stand to preserve our environment,” he said afterward in a statement. “In the absence of federal action to protect our drinking water and prevent climate change, New York must take the lead in creating a green, sustainable future. I — along with the hundreds of people who marched today — will keep fighting to increase investments in renewable energy, pass measures to mitigate climate change and protect our drinking water.”

People of many different backgrounds and ages took part in the march. “I came out and marched today to represent the millennials, and to show that wind power and saving our earth is extremely important,” said 14-year-old Jessica Carreiro, of Long Beach.

“The fact that we’re denying innovations like solar energy and wind power is just absurd,” said another Long Beach resident, Nate Epstein. “Even if climate change were a hoax — which it’s obviously not — it’s just absurd to deny those technological advancements. We need people to come out, show support and show that they don’t agree with the president.”