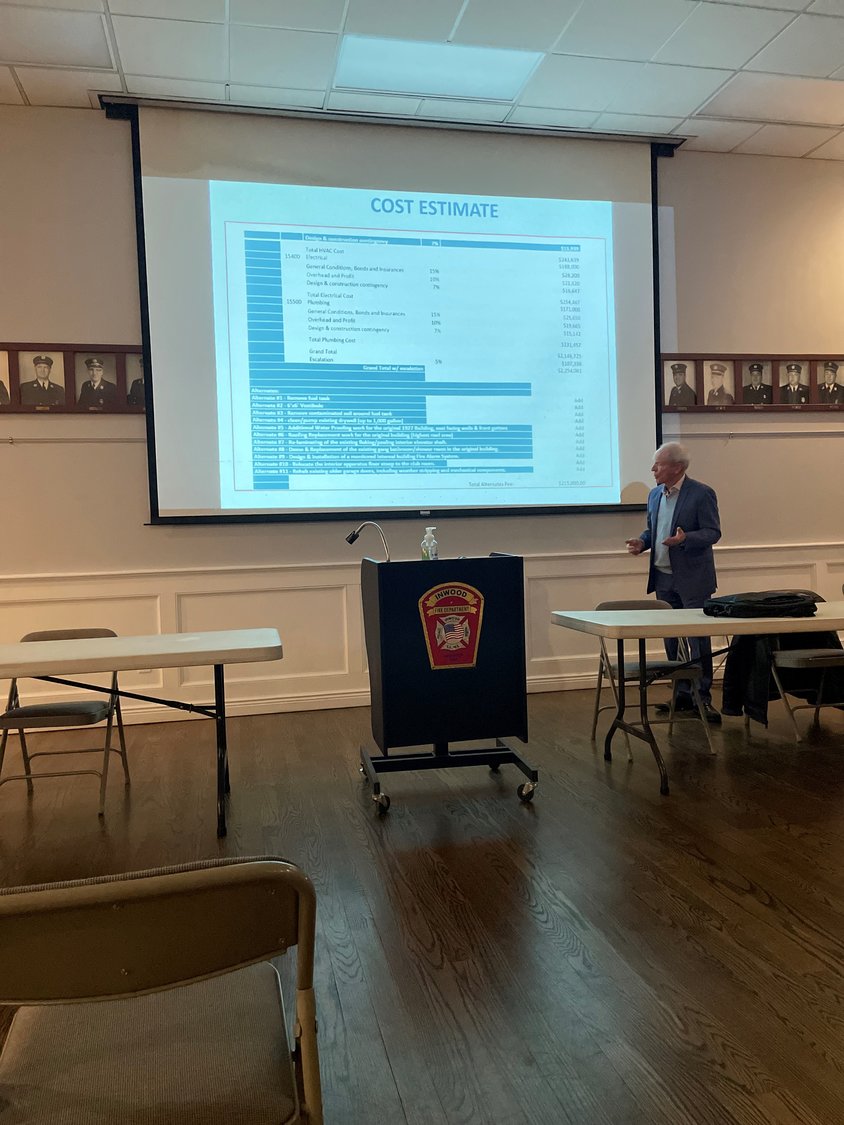 The Inwood Fire District's  $.4.8 million bond for a  proposed 2,900-square-foot expansion of the existing firehouse and a new 100-foot bucket ladder truck to replace the current 75-foot ladder truck passed 41 to 3 on Feb. 8. Both bonds will be financed over 17 years.

Fire district officials presented information at a meeting on Jan. 27 on what will now be the third renovation of a firehouse that was built in 1927. Previous work was done in 1951 on the Doughty Boulevard side of the building. In 1995, a Wanser Avenue addition was constructed and an elevator was added, along with minor American with Disabilities Act-compliant changes.

More space is needed in what is called the apparatus room for the first-response ladder truck and the department’s larger vehicles. The current fleet includes two ambulances, two engines, two ladder trucks, a rescue boat and a five-ton Army truck housed in the annex building.

More space is also needed for firefighters’ gear and equipment, which, according to fire district officials, would also create safer conditions for firefighters, with more room between the vehicles and the equipment.

“The addition will give us the ability to accommodate the size changes with the vehicles,” said Relf, who has designed plans for at least 300 firehouses from Massachusetts to Florida.

A reconfiguration of the metal handicapped-accessible ramp on the side of the firehouse, the elimination of the outdated fuel-dispensing system and underground storage tanks, and construction of a corridor connecting the firehouse with the annex are also part of the expansion plans.

Other site work will include the installation of storm-water drainage rings, roof drainage connected to the storm-water system, paving, landscaping and modification of the firehouse’s Doughty Boulevard curb cut and front apron.

The new truck is expected to cost roughly $2 million, and the amount to be borrowed is not to exceed $2 million. Inwood Fire District Manager Dennis Varriello told the Herald that along with the space problem, the larger truck is needed because at least two buildings are expected to be constructed in Inwood that will be five stories high, and there will likely be more construction with the anticipated transit-oriented residential and mixed-use developments in Inwood and North Lawrence.

“It’s a tight fit — difficult to walk around, get access to the equipment and for firefighters to get dressed,” Varriello said, noting that the firehouse has reached its capacity.

The Inwood Fire Department was established in 1887. The fire district was formed in 1926. Fire districts are political entities with elected governing bodies — boards of commissioners — that create budgets. A fire district has the power both to incur debt and to require the levying of taxes. It purchases the equipment the Fire Department needs.

Noah Nadelson, the CEO of Port Jefferson-based Munistat, said that for a single-family home with an assessed value of $400 the bond would cost an additional $72.76 in annual property taxes. Munistat advises fire districts, libraries and municipalities on capital projects.

“We went out of our way to not only get a truck that will help us protect homes but with these major developments,” said Fire Commissioner Anthony Rivelli Sr.