'It's never too late'53-year-old is new mother of twins 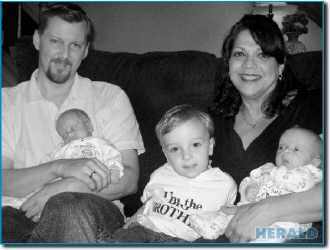 By ANTHONY BOTTAN
And now, six weeks after the birth of her twin sons, she wants women to know that it's never too late to be a mom.
After having three children with her first husband and watching them all graduate from college, Sarajean, who was divorced, remarried in 2001, at age 46. Her new husband, David Grainson, then 34, was a former priest and had never been married. The two wanted to have children of their own, but since Grainson had already been through menopause, they were unable to conceive children naturally.
After speaking to a 40-year-old friend who underwent in-vitro fertilization, Sarajean decided that the procedure was the best choice for her. To increase the chances of a pregnancy, she was implanted with two donor eggs from East Coast Fertility, a clinic in Plainview, in April 2006, and gave birth to a son, Luke, that December.
But there was still something missing. "I was one of four kids," Sarajean said. "We loved each other and were always there for each other, and I didn't want [Luke] to be without that."
So she and David went back to East Coast Fertility in September of 2008, hoping to give Luke a younger sibling. This time three donor eggs were implanted, and two of them turned out to be viable. The Grainsons were told they were having twins. "I was in shock," Sarajean said. "I was hysterical crying."
Because of her age, doctors had to closely monitor Sarajean's health from the beginning of her pregnancy. Dr. Victor Klein, a specialist in high-risk pregnancy at North Shore University Hospital, gave her check-ups every two weeks, monitoring her for two of the most common signs of trouble in older women who are pregnant, hypertension and diabetes.
But there were no complications, and Matthew and David were born on May 23. "It was a triumph, medically and personally," Klein said, explaining that women who are in their 40s and 50s can still have children if they are in good health. "I think people should consider it if it's right for them."
David Grainson, who said he left the priesthood because of the church's rule of celibacy, said that after he and Sarajean had Luke, it felt right being a father, but he didn't know if he could love another child as much as he loved Luke. Yet when he saw Matthew and David for the first time, his worry dissipated almost instantly. "I found out that I could love more than one child like I love Luke," he said.
David is writing a daily journal on the lives of his boys, and plans to tell them how they were conceived when they get older. He say he doubts they'll have a problem with it. "It's as important and big a deal as you make it," he said. Asked if he wonders how he and Sarajean will handle teenage boys when he's in his late 50s and she's pushing 70, he said he doesn't think age matters. "As long as they know they're safe, secure and in a loving home, it's all the same, no matter the age," he said.
Sarajean added that she thought long and hard about the consequences of having children at an older age, but now urges women in their 50s to pursue their dreams of having a family. "Go for it," she said. "If you can do it, then do it. You have to be healthy, get good doctors and be able to swing it in your mind. The biggest commitment is to a family."
She added that having children again has helped her live life one day at a time. "You rush them when they're little," she said. "... I enjoy the moment now because that wedding day dance comes so fast."
Comments about this story? ABottan@liherald.com or (516) 569-4000 ext. 246.