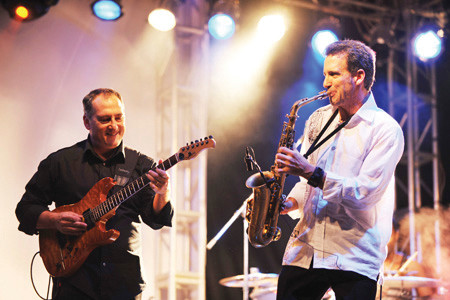 Eric Marienthal and Chuck Loeb
The chart-topping contemporary jazz pioneers appear together, with special guest Al DeGregoris, for an evening that showcases their creative collaboration. Marienthal, the celebrated saxophonist, and guitar wizard Loeb join forces for the ultimate jazz fusion concert that demonstrates the versatile musicality of these two dynamic talents. The pair recently collaborated on the highly successful smooth jazz CD “Bridges,” which All About Jazz cited as “a tour de force of finesse, artistry and simple old moxie.” DeGregoris, an emerging keyboardist and composer, adds his special touch to this lively evening.
Saturday, April 16, 8 p.m. $50-$65, $95 VIP includes a wine and cheese lounge prior to the performance. Madison Theatre, Molloy College, 1000 Hempstead Ave., Rockville Centre. (516) 323-4444 or www.madisontheatreny.org.


Chamber Orchestra of New York
The dynamic young orchestra visits the area with a festive concert showcasing music from the movies, in a celebration of the 25th anniversary of the Academy Award-winning “Cinema Paradiso.” In addition to selections from Ennio Morricone’s “Cinema Paradiso,” the program includes Gabriel’s Oboe from the film “The Mission,” and along with other works. The orchestra, the leading ensemble in the U.S. devoted to Italian repertoire, also performs Debussy’s Clair de Lune (from “Ocean’s Eleven”), Puccini’s O Mio Babbino Caro (from “Room with a View”), Corelli’s Christmas Concerto (from “Master and Commander”), Mahler’s Adagietto (from “Death in Venice”), and Dances (from “The Leopard”).
Saturday, April 16, 7:30 p.m. $40 and $35. Adelphi University Performing Arts Center, 1 South Ave., Garden City. (516) 877-4000 or www.boxoffice@adelphi.edu.

Dennis Elsas
The longtime radio personality, rock historian and master storyteller shares the legacy of those heady days of when rock was young in his multimedia show, “Rock ‘N’ Roll Never Forgets.” For more than 40 years, Elsas has been one of the most influential voices in FM radio, interviewing legions of music legends including John Lennon, Elton John, Jerry Garcia, Pete Townshend, and so many more. Now he presents highlights from these interviews, along with rarely seen film, video and audio together with his personal insights of a time that gave many the soundtrack for their lives.
Saturday, April 16, 8 p.m. $27. Jeanne Rimsky Theater at Landmark on Main Street, 232 Main St., Port Washington. (516) 767-6444 or www.landmarkonmainstreet.org.