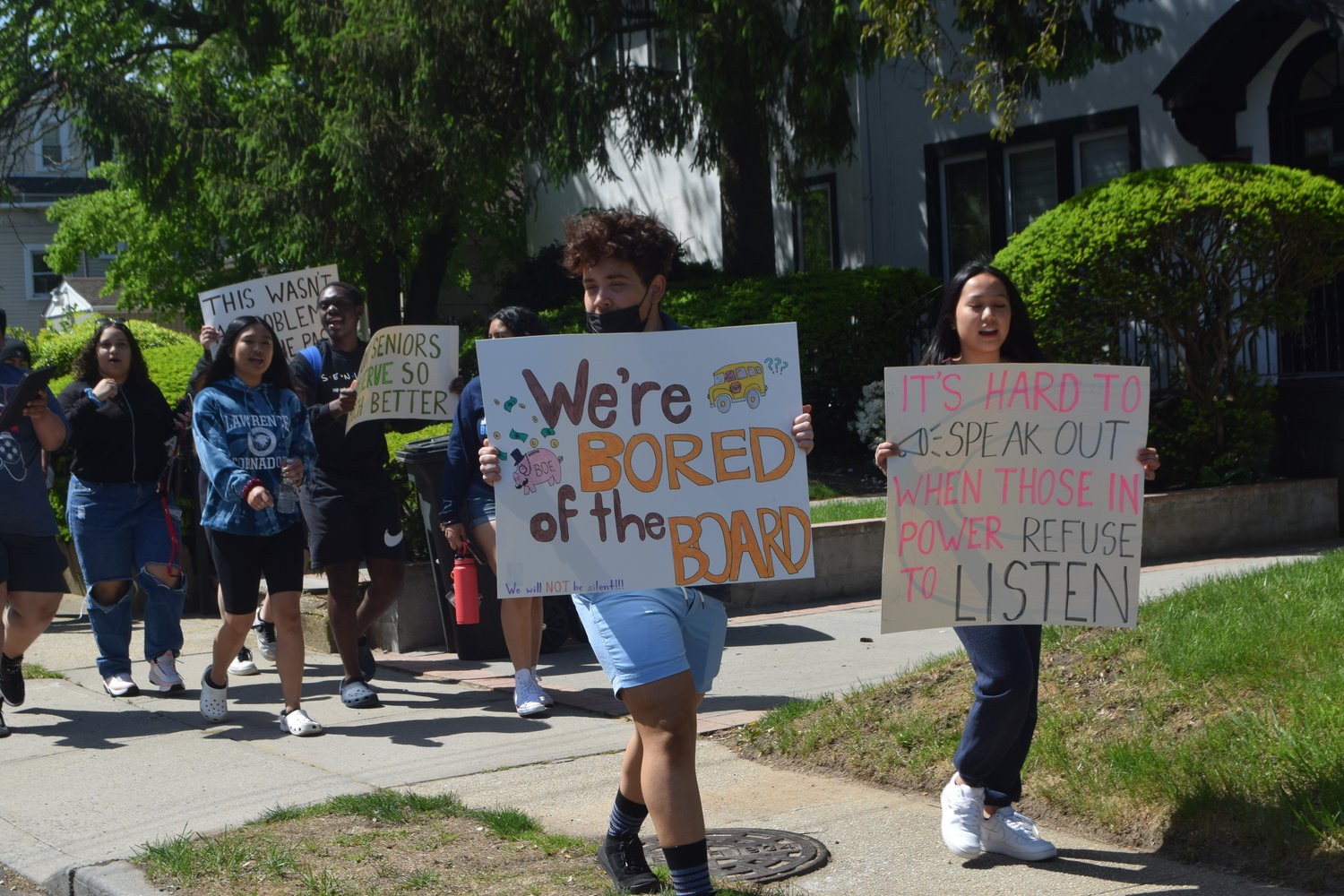 Lawrence High School seniors Youry Tundidor, left, and Gabrielle Domanas led their classmates as they marched along Cedarhurst Avenue to the high school on Monday.
Jeffrey Bessen/Herald
By Jeff Bessen

Chanting slogans such as “The Lawrence board must go,” “We’re bored with the board” and “What do we want? We want our buses,” roughly 30 Lawrence High School students marched from Andrew J. Parise Cedarhurst Park along Cedarhurst Avenue to the high school and up and down Oxford, Albemarle and Arlington roads by the Reilly Avenue campus on Monday.

The students were protesting a decision by Superintendent Ann Pedersen that the district would not cover the cost of the coach buses for the traditional senior trip to Six Flags Great Adventure in New Jersey. Pedersen decided that the senior class would be better served overall if the district covered the cost of caps and gowns for graduation.

“The senior experience has many expenses that fall outside of the educational mission of the district,” Pedersen wrote in a statement. “This year, I have directed that each senior and their family be relieved of the price for the cap and gown for graduation. The decision was made by myself, not the Board of Education.”

The trip to Six Flags typically costs $75 per person, which in previous years covered food, T-shirts and tickets for the amusement park, with bus transportation paid for by the district.

This year the same fee will cover T-shirts, tickets and transportation. Students said they decided not to include food in order to avoid raising the $75 fee. In the past they have purchased food at the park.

The district will spend $5,850 more for caps and gowns than for a bus for the trip. If the seniors needed two buses, the cost would be $2,300, she said, adding that two buses would most likely not be needed.

“Every single year it’s tradition to go to Six Flags, and the Board of Education has always funded the trip,” said senior class treasurer Youry Tundidor, one of the organizers of the rally. “I know to outsiders it may look kind of silly, but it’s something that people look forward to senior year, and they’re being denied that this year.”

The protest march was the second in 18 months by Lawrence High students. In December 2020, roughly 40 students gathered at Cedarhurst Park and marched to the high school to demand that the school district reinstate sports and clubs following the cancellation of that year’s spring and fall sports seasons amid the coronavirus pandemic.

The district also canceled the winter track program, but Lawrence athletes did take park in truncated fall and spring sports seasons in the second half of the 2020-21 school year.

“The reason I’m here is because our Board of Education [is] not covering our transportation to Six Flags, though they have in the past,” said senior class President Gabrielle Domanas, another rally organizer. “It hasn’t been an issue in the past. When we looked at their budget for transportation, it’s $12 million, and it covers all transportation.”

The students were vocal but remained orderly as they marched to the high school. There Domanas and Tundidor emphasized that the seniors wanted to be heard by the district administration and the Board of Education.

“We honestly just want to be heard, and to be able to set a precedent, and show we’re just not going to stay quiet and do nothing about it,” Tundidor said.

Have an opinion on the Lawrence School District’s decision? Send a letter to jbessen@liherald.com.