Libraries band together in “eBooks for all” quest 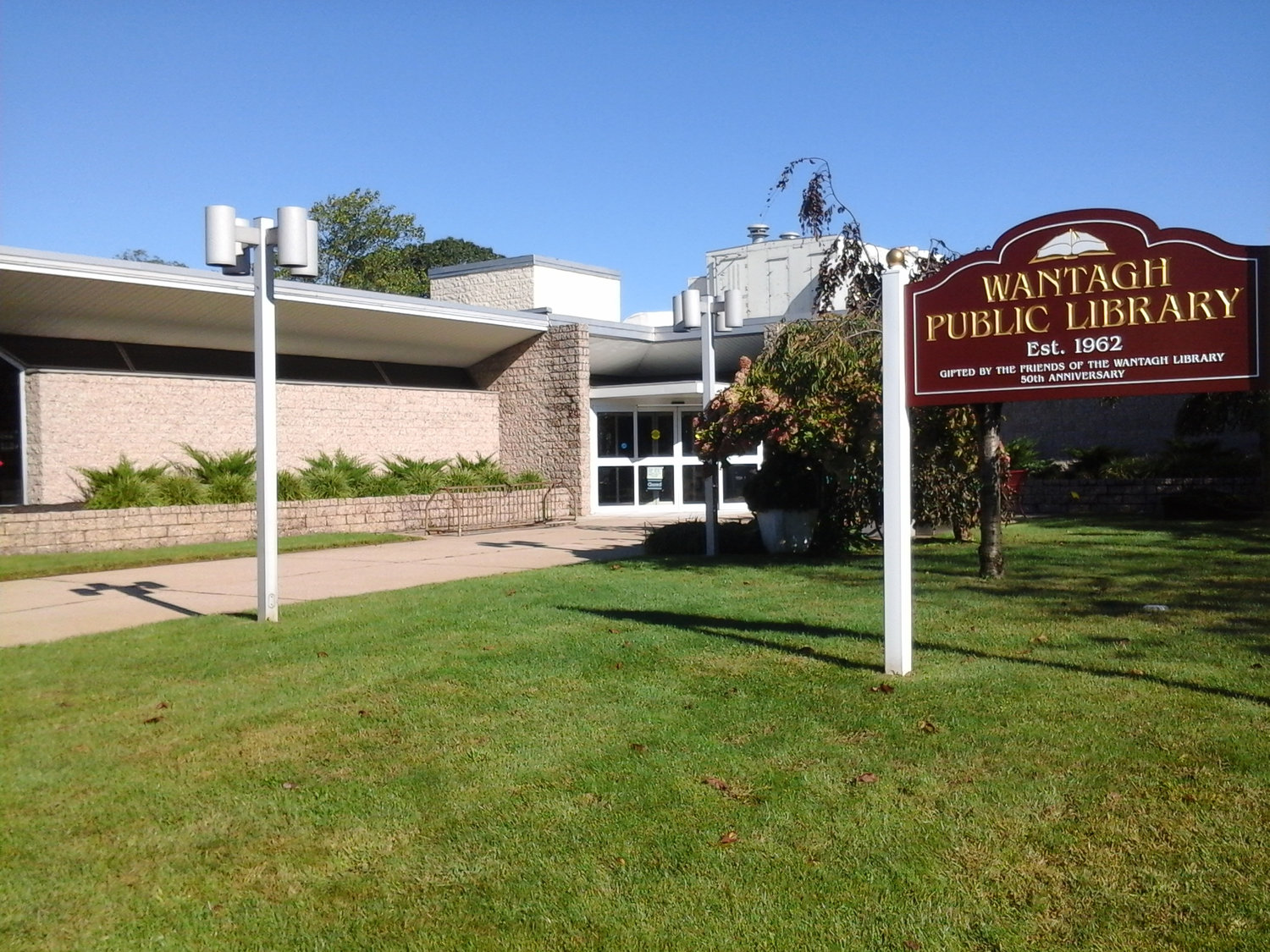 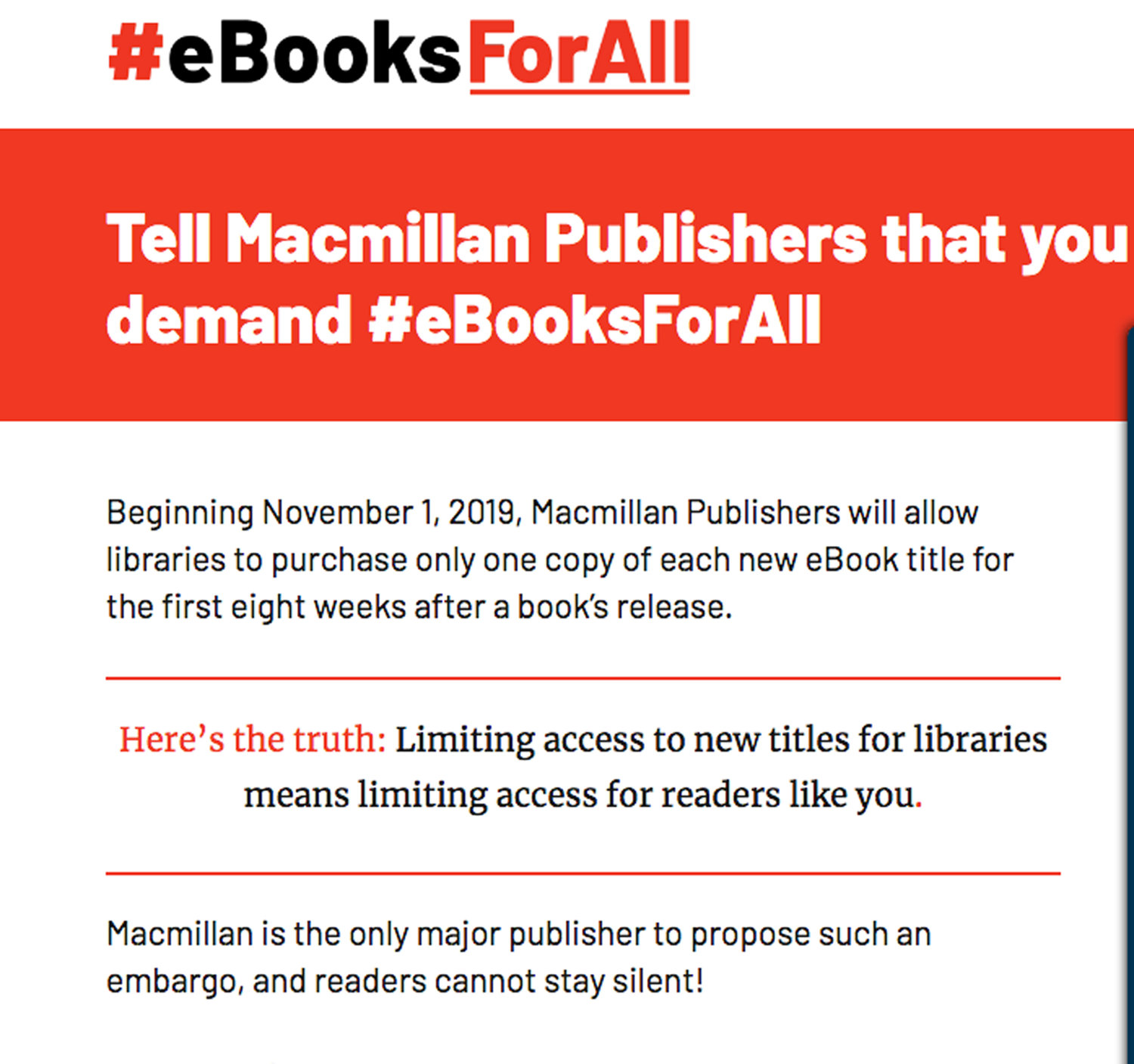 They are censoring how we purchase our books, and that is not right.”
Joan Morris Director, Wantagh Library
By JD Freda

With the increased popularity of third-party vendors like Amazon and Audible, large publishing companies have started to alter their eBook licensing models to limit public libraries’ access to the books.

The Wantagh Public Library recently joined the Nassau Library System and the American Library Association in their very public battle with Macmillan Publishers over planned eBook limitations. The library believes that the publisher’s actions could push rental request fulfillment back weeks, if not months.

“Over the past few years, these big publishing companies have been experimenting with new . . . terms, but this is different,” Caroline Ashby, director of the Nassau Library System, said. “None have been restrictive to access, like this new Macmillan policy.”

London-based Macmillan operates in more than 70 countries. In a previously confidential memo sent to various Macmillan branches on July 25 by CEO John Sargent, the company said it would limit the number of eBooks a public library can purchase to just one copy in the first eight weeks after a book is released.

“One thing is abundantly clear,” Sargent wrote in the now-public memo. “The growth in eBook lends through libraries has been remarkable. For Macmillan, 45% of the eBook reads in the US are now being borrowed for free from libraries. And that number is still growing rapidly. The average revenue we get from those library reads (after the wholesaler share) is well under two dollars and dropping, a small fraction of the revenue we share with you on a retail read.”

Attempts to reach Macmillan representatives at press time were unsuccessful.

It is common practice for publishers to charge public libraries a higher rate for eBook licensing than their rates for consumers. Library licenses are also usually temporary.

“We usually have to pay two to five times more per title than consumers,” Ashby said. “The license also expires generally, and we have to repurchase every 24 months or 26 checkouts, whichever comes first, as opposed to consumer licenses, which is a one-time, permanent purchase.”

Sargent laid out the new terms in his July memo, stating, “We will make one copy of your eBooks available to each library system in perpetuity upon publication. On that single copy, we will cut the price in half to $30 (currently first copies are $60 and need renewal after two years or 52 lends). This change reflects the library’s request for lower prices and perpetual access. Additional copies of that title will not be available for library purchase until 8 weeks after publication.”

Fifty-two of Nassau County’s 54 public libraries run on the same online eBook server through a vendor named Overdrive. NLS manages the account that the public libraries share. Ashby said she believed that Macmillan’s wording could mean that the entire library system could eventually be subject to a limit of one copy per title.

“We hope that is not the case,” Ashby said. “But even if it is one copy per library, that is not enough. Some of our libraries service more than 50,000 people. Nassau County has over 1.3 million people.”

The ALA started an online petition against the proposed Macmillan policy, and it had garnered nearly 87,000 signatures as the Herald went to press. The Wantagh Library has been spreading the petition on its social media accounts.

“They are censoring how we purchase our books, and that is not right,” said Wantagh Library Director Joan Morris.

The Wantagh Library has seen its online readership increase over the past few months, and Morris said she was worried about how the new policy would limit readers.

“In July of this year we tracked 426 active online users that regularly consume digital content, and in August we tracked 461,” Morris said. “It keeps going up and up, which is another reason this will hurt those people that use our services.”

On Aug. 26, the Nassau Library System administrative staff met with its board of trustees to create a “Resolution in Support of Fair Access to Digital Content.” The staff met with local state legislators on Oct. 4 to discuss the issue.

“We met with them and discussed how we as libraries are here to provide equity of access,” Ashby said. “Some people may have the ability to buy a book on their own, but their neighbors may not. We have a lot of senior citizens and families that rely on libraries, and they still need us.”

The Wantagh Library echoed the NLS’ sentiments at a board meeting on Sept. 16. “It’s kind of like [Macmillan] is turning on us,” Morris said. “It’s unfortunate, because we do not want the people hampered by any publisher’s ‘pocket motives.’”