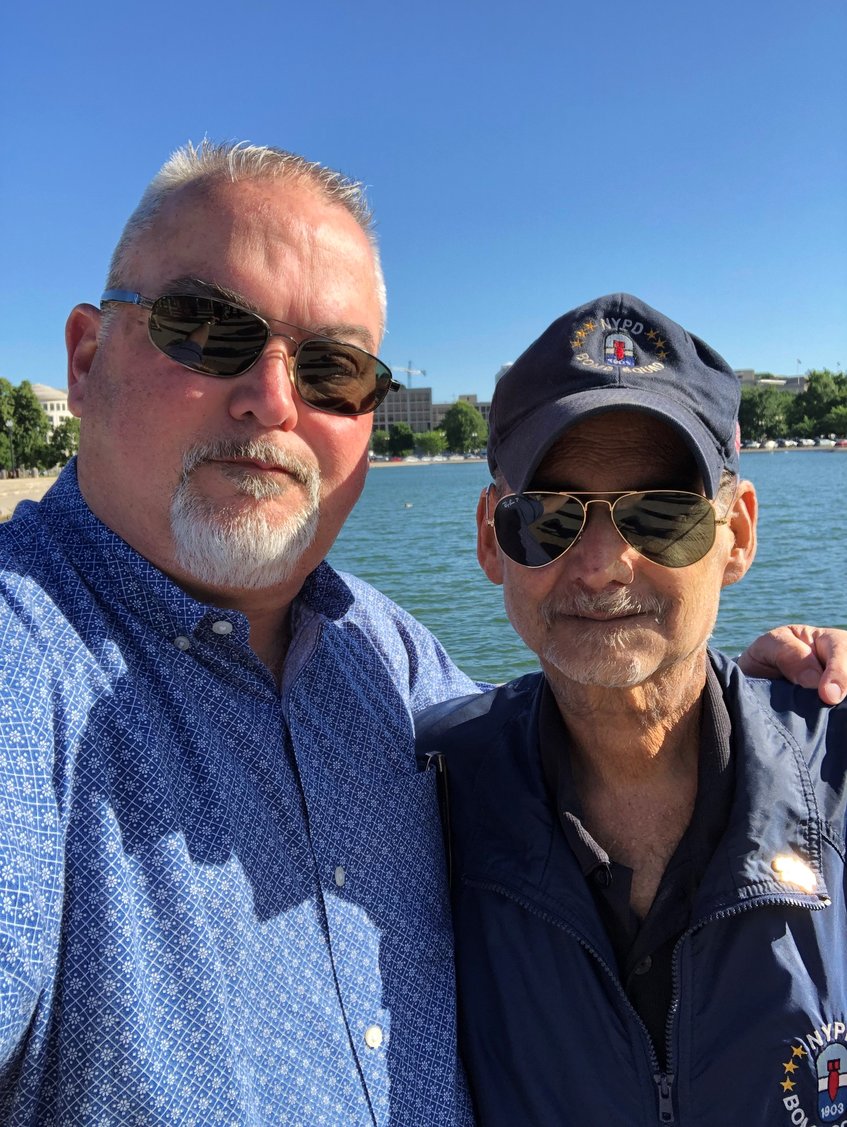 Phil Alvarez, left, joined a law firm to help 9/11 first responders in honor of his brother, the late Luis Alvarez, who died of 9/11-related cancer and fought successfully for the replenishing of the September 11th Victim Compensation Fund.
Courtesy Phil Alvarez 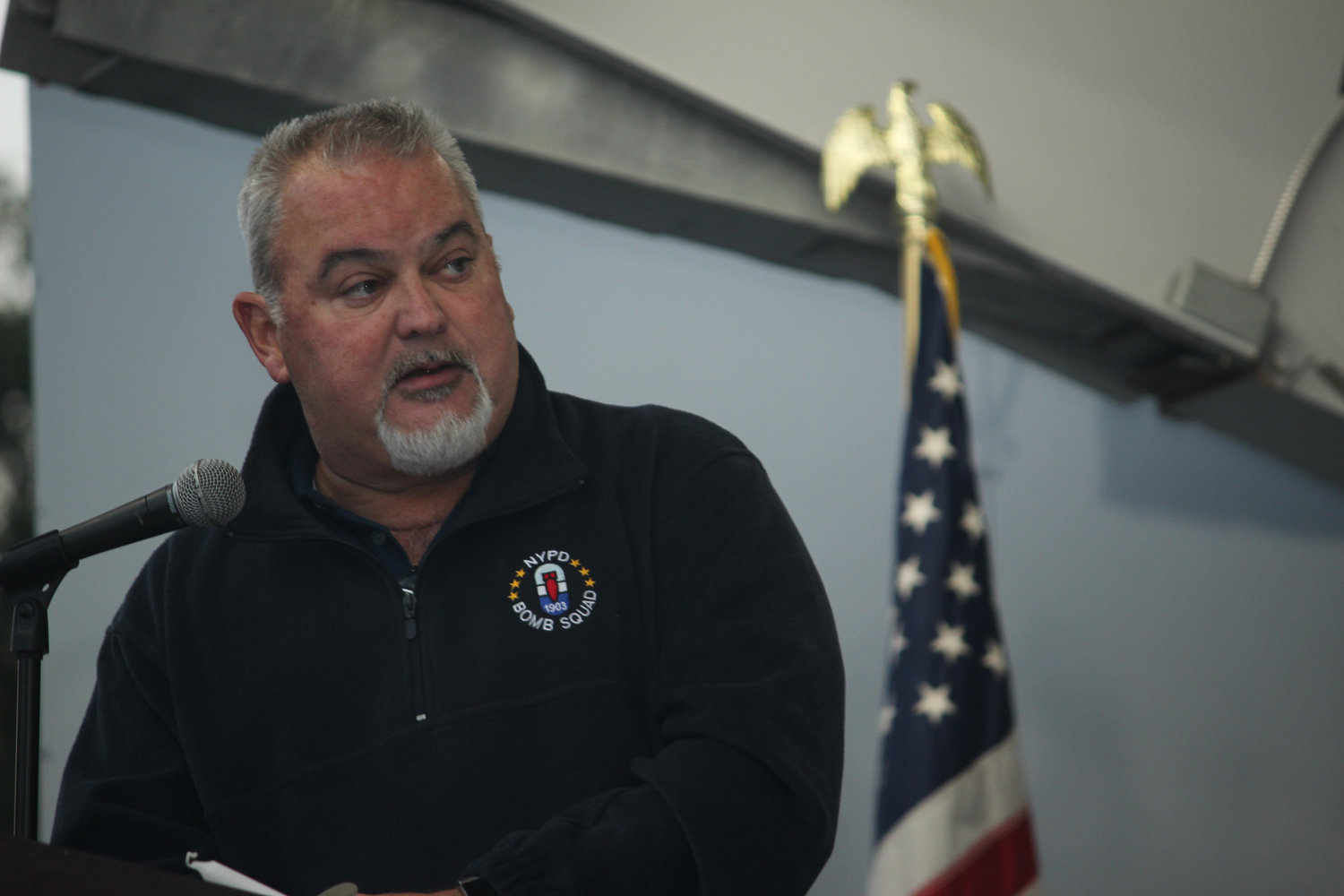 Phil Alvarez, who worked as a detective in the Suffolk County Police Department for 32 years, said that he and his brother shared a bond as police officers.
Theresa Press/Herald 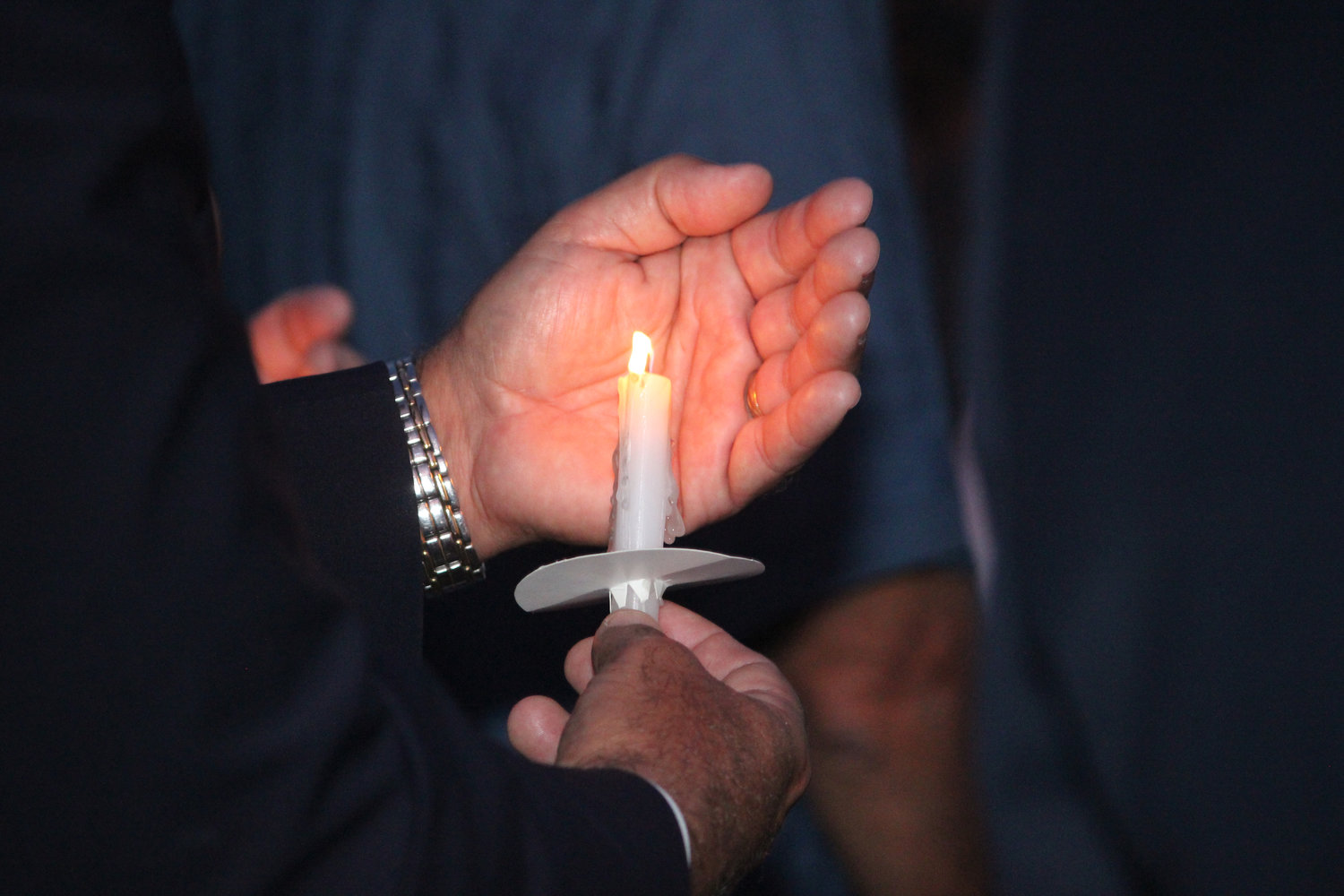 Oceanside hosted a candlelight vigil and celebration in honor of Luis Alvarez on Friday at the Schoolhouse Green and EGP Gastropub.
Theresa Press/Herald 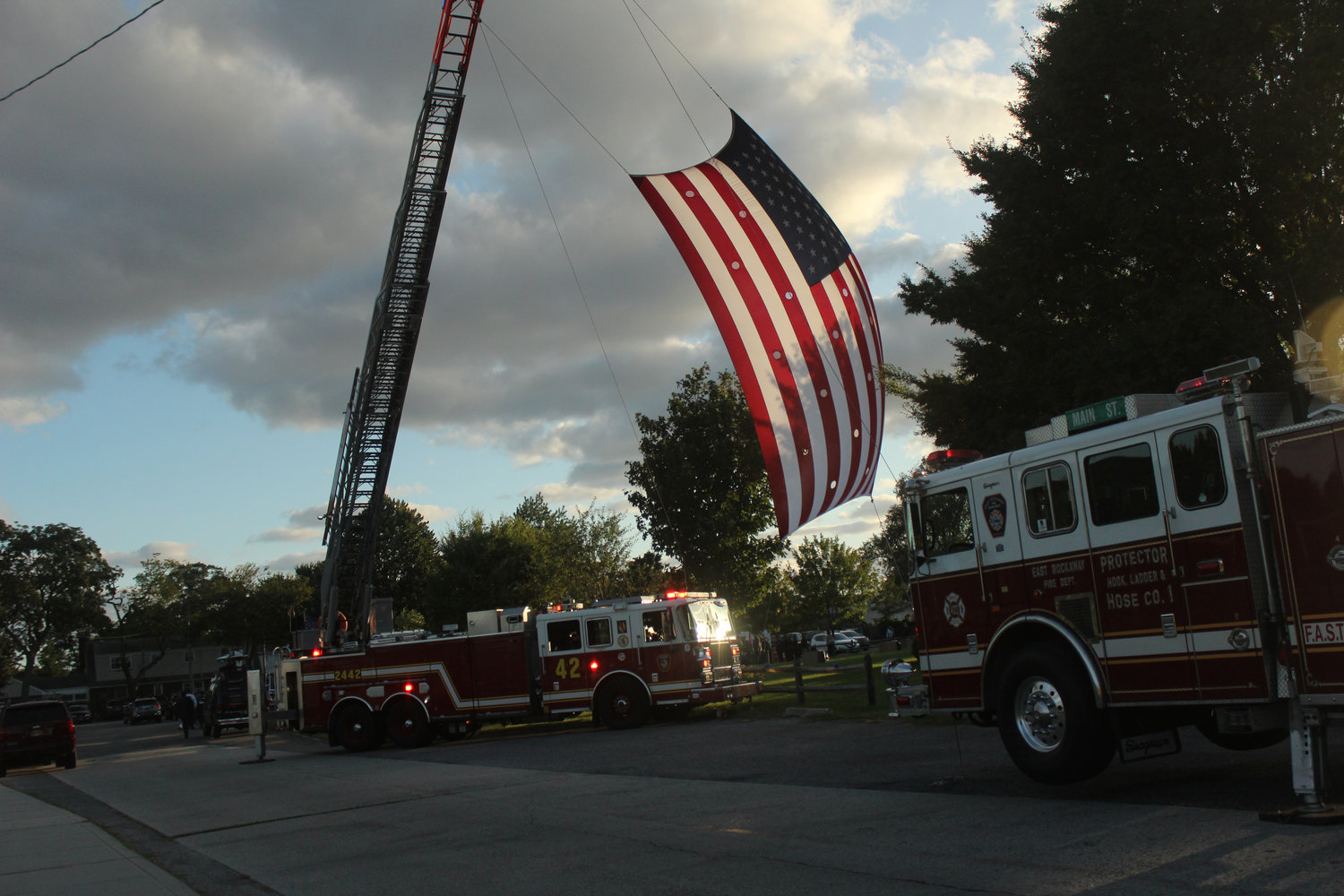 An American flag flew in memory of the late Luis Alvarez when the Oceanside community memorialized him last Friday.
Theresa Press/Herald
Previous Next
By Mike Smollins

There was no stopping Luis Alvarez from spending months digging through rubble at ground zero in 2001, searching for survivors — not even the toxic air, recalled his brother, Phil Alvarez.
“There was no other place he wanted to be but ground zero,” Phil said. “They were told that the air was good. . . . He always said even if they told him the air was bad, he still would have been down there. Nobody was keeping my brother from going down there.”
Fifteen years after he finished working at the World Trade Center site, Luis was diagnosed with stage 4 colorectal cancer related to that work. He succumbed to his illness on June 29, at age 53, after a three-year battle. His successful fight to restore the September 11th Victim Compensation Fund lives on through his older brother, who turned 57 on Sept. 13. Phil joined Turley Hansen & Rosasco, a Long Island-based law firm specializing in 9/11 VCF claims, not as an attorney, but in the role of 9/11 outreach and education director.
“We’re going to be using every means available to get the word out to 9/11 first responders and victims to get checked out,” Phil said. “We’re going to encourage them to get into the World Trade Center health program and sign up for the Victim Compensation Fund so that, God forbid they get sick, they’re covered. It was my brother’s message, because it took 15 years for him to get sick.”
The face of the battle


Luis Alvarez, a former Bomb Squad detective, became the face of the fight to renew the VCF, which benefits first responders who contracted illnesses from the toxic fumes at ground zero, when he testified before a Congressional subcommittee just weeks before his death.
His brother said he joined the law firm because it has taken care of victims since October 2001. He took on the role just as the nation commemorated the 18th anniversary of 9/11 last week, as a way to stay active after retiring as a Suffolk County Police Department detective on Jan. 14, after 32 years. Luis, Phil said, was close to their other siblings, including their brother, Fernando, 55, who was born between them, and their younger sister, Ida, 50, but he and Luis shared a special bond because they were both police officers. He also recalled that Ida urged Luis not to go down to ground zero in 2001, citing safety and health concerns, but there was no persuading him.
Phil said the Alvarez family, including his parents, Felipe and Ida, and Luis’s wife, Alaine Parker Alvarez, and their three children, were overwhelmed by the outpouring of support from the community and from the hundreds of people who attended Luis’s funeral at Immaculate Conception Church in Astoria, Queens, on July 3. The Alvarez family came to the United States from Cuba when Luis was 2 and settled in Astoria, but as an adult, Luis moved to Oceanside. The community continued to show its dedication to him by hosting a candlelight vigil in his honor on Friday at the Schoolhouse Green, followed by a celebration at EGP Gastropub, which was attended by hundreds.

An outpouring of love
“Our family is completely overwhelmed with the outpouring of love and support we’ve received,” Phil said. “It has come from so many avenues and so many people.”
That outpouring continued last week when county officials unanimously voted on Sept. 10 to rename Terrell Avenue Park in Oceanside to Detective Luis G. Alvarez Memorial Park. Nassau County Executive Laura Curran filed a resolution to rename the park in his honor in August, two months after his death.
“This park will serve as a symbol and reminder of his sacrifice and unwavering fight for 9/11 first responders,” Curran said in a statement in August. “We hope his family, friends and the community will enjoy this tranquil neighborhood space dedicated in his honor.”
Luis gained national attention when he sat beside comedian Jon Stewart during his televised appearance on Capitol Hill on June 11, when the former NYPD detective discussed his suffering and urged lawmakers to renew the Victim Compensation Fund. The House approved a bill to replenish the fund with $10.2 billion over the next 10 years, 402-12, on July 12, and the Senate voted, 97-2, to approve it on July 23. President Trump signed it into law on July 29. Many have credited Alvarez’s passionate testimony for getting it passed. In a statement, the Alvarez family said it was grateful for the support.
“The outpouring of love and respect for Lou continues to be overwhelming to us all,” the statement read. “Lou was a very strong man and protector of family, friends and strangers. However, equally as important was the time he had to himself to quietly think and reflect. To have this beautiful meditation and reflection park in his hometown of Oceanside for adults and children to enjoy is truly an honor to the legacy of Luis Alvarez as well as the entire Alvarez family.”
Phil said he has many fond memories of his brother, including taking several road trips to Washington, D.C. He said that traveling to the nation’s capital for Luis’s testimony still stands out, because even though Luis was sick and had a pump implanted in his abdomen to treat his liver, he was in good spirits. After his testimony ended and the audience gave him a standing ovation, Luis was puzzled, according to his brother. “He turned to me and asked, ‘Why is everybody clapping?’” Phil recounted. “It was just a great moment.”
Luis became active on social media after his diagnosis. He contacted many of his peers through a private Facebook group called Club 23, named in honor of the 23 NYPD officers who died instantly when the twin towers fell. There are 15,000 members of the group, and Luis used the platform to urge his fellow officers to get examined and to join the Victim Compensation Fund. During chemotherapy sessions, he spent hours in a chair at the Memorial Sloan Kettering Cancer Center in Manhattan and blogged about his experience in the group.
“The message is one that has resounded even after he’s passed,” Phil said. “We’ve been getting calls, cards and emails from numerous people telling us they got checked out because of Luis and they’re alive because of him. For a family, that is the best message we can get.”
During his treatments, Luis had trouble sleeping, and began carving positive messages on wood for others battling cancer. After his illness worsened, he was in hospice care in Rockville Centre for 10 days. He died before the fund was restored, but Phil said the family vowed to continue fighting for it. Now that it has been replenished, Phil said, he will help first responders in honor of his brother.
“We promised him we’d see it through for him,” he said. “He said, ‘Make sure you take care of them.’ That’s the motivation I take into this firm. I have to find the first responders. I have to help them.”
Report an inappropriate comment