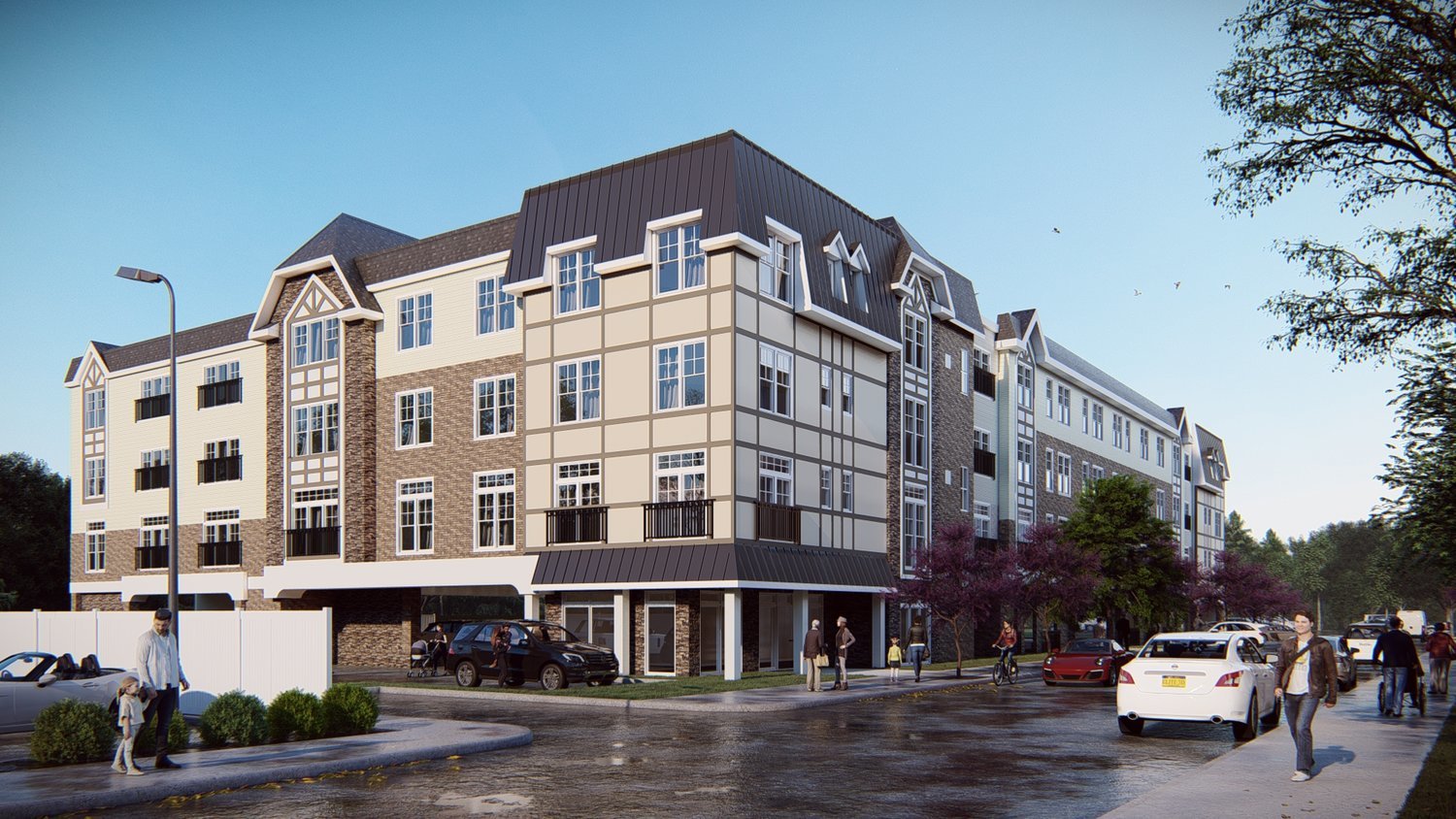 On Monday, The Lynbrook village board approved a developer’s plan to build luxury rental apartments at the site of the Lynbrook Motor Inn. Above, a rendering of the proposed complex.
Courtesy Terwilliger & Bartone Properties 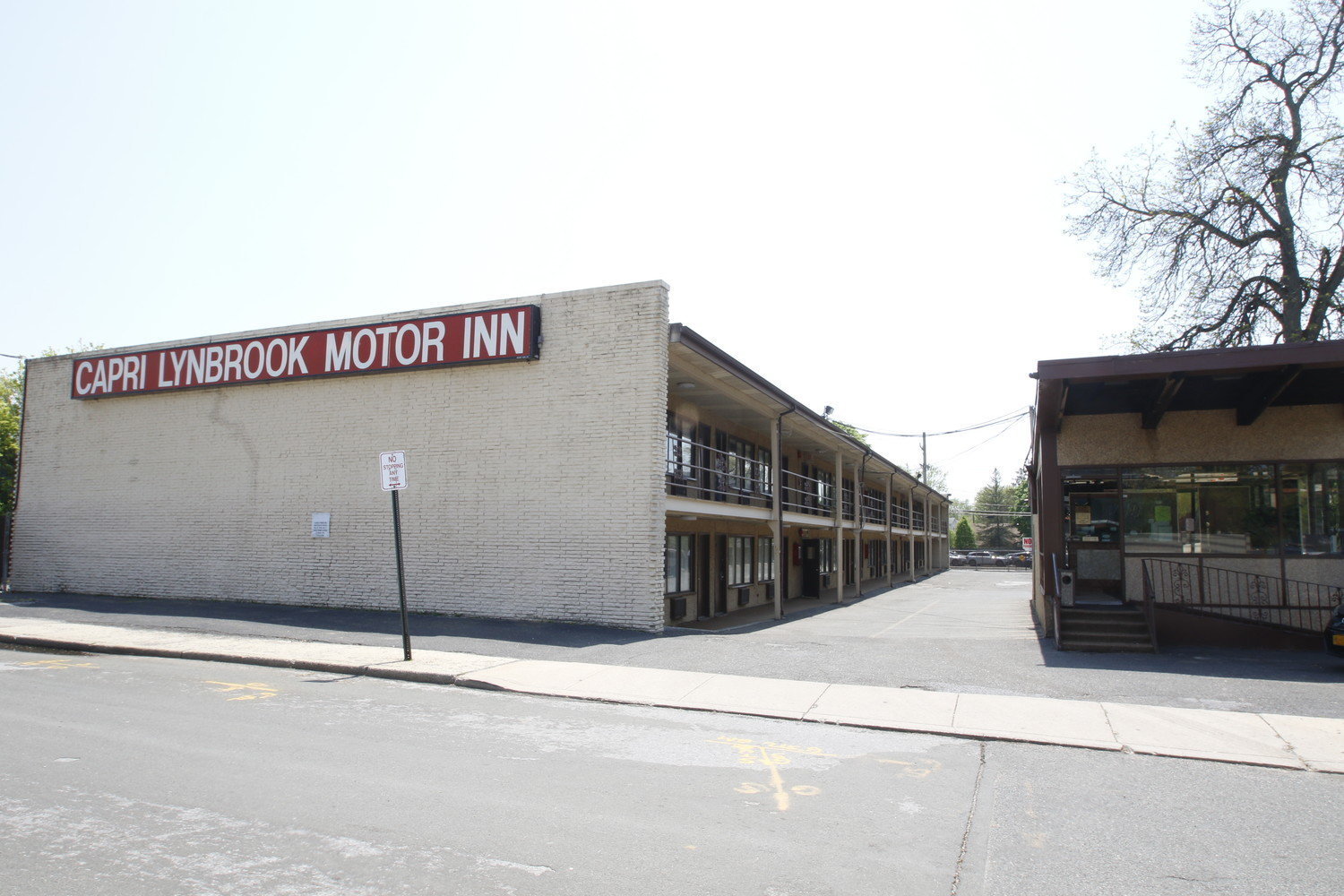 The Lynbrook Motor Inn, formerly the Capri, has for years been a neighborhood nuisance, according to village officials.
Christina Daly/Herald
Previous Next
THE CAPRI: A TIMELINE

2013: There are six prostitution arrests at the Capri Lynbrook Motor Inn.

March 2015: Mayor William Hendrick publicly derides the motel and seeks to tear it down.

May 2016: At a village board meeting, several residents who live nearby say they believe the motel is a nuisance and a danger to the community.

March to April 2017: Hendrick forms a panel comprising three elected officials to host a series of hearings to determine whether the Capri owners should have their room-rental license revoked. The hearings include testimony from Lynbrook police officers, hotel managers and an expert witness.

May 2018: Christine Cucura, of Lynbrook, is found dead of a heroin overdose at the motel.

July 2019: Village officials announce that developer Anthony Bartone is planning to purchase the motel, where he will build luxury apartments. The sale is contingent on the village’s approval of Bartone’s plan, and the Capri is to continue operating until the plans are finalized.

August 2019: Bartone hosts an open house at which he gathers community feedback about the proposed apartment complex.

November 2019: The village board approves Bartone’s plan, 4-1, and Bartone announces he will demolish the motel and start building the apartment complex in the spring.

The Village of Lynbrook Board voted on Monday to approve a plan for a four-story, 80-unit luxury rental apartment complex at the site of the Lynbrook Motor Inn, formerly known as the Capri.

Bartone has tried for years to build an apartment complex in Lynbrook, and noted that he thought the Capri was a good site for one because it has been a neighborhood nuisance for many years, and the scene of a number of arrests.

Becker expressed concern, however, about the potential impact that a possible payment in lieu of taxes agreement would have on taxpayers. He had not seen anything in writing, he said, detailing the terms of the PILOT, which he contended could burden residents with high taxes.

“I don’t think we should be approving the project if we don’t know what the financial ramifications are going to be,” Becker said. “We really, as a board, should be making sure that we have a full understanding of what this PILOT is going to be.”

Bartone said that the developers planned to seek a PILOT from the Nassau County Industrial Development Agency. He added that he hoped residents knew that a PILOT is not a property-tax abatement, but is a property-tax phase-in, and once it is fully implemented, Terwilliger & Bartone will pay nearly $1 million a year in property taxes, compared to the $220,000 now paid by the Capri owners.

Becker expressed other concerns as well, such as being unable to review the appraisal and the parking study that was completed at the site.

In response, Beach said Becker had had since Aug. 31 to ask questions. “This information has been out for anybody to look at and review,” the mayor said. “You had your time to review it, and now you’re asking these questions? ... You chose not to call me and ask me a question. That’s on you.”

Business owner Jeffrey Greenfield and residents Cathy Bien and Laura Ryder questioned Becker’s concerns over the project. They each noted the longtime trustee’s real estate background in pointing out that he should have known the IDA could not reach a PILOT agreement until the project had been approved locally.

Becker was an outspoken critic of Bartone’s last attempt to bring a luxury apartment complex to the village. Bartone had sought to construct a 200-unit residence and a separate four-story parking garage in the village’s downtown, which was met with resident backlash because of a perceived lack of information and its size. Becker’s opposition sparked a contentious mayoral election between him and Beach, who won with more than 75 percent of the vote. The village board, though, unanimously nixed the Cornerstone project last year after residents raised concerns.

Beach, Reardon, Hawxhurst and Boccio each took issue with Becker’s comments at Monday’s meeting, with Boccio calling the trustee “out of touch” with the village’s needs, noting that the apartment complex would remove a neighborhood blight.

“There’s an undertone here of a lack of due diligence, and I patently disagree with that,” Boccio said. “There was a public hearing, and questions were answered over and over and over again. Whether you’re getting the answer that you want to hear as opposed to getting information, they’re two different things.”

The Tudor-style apartment complex will be built at 5 Freer St., where the motel has operated since 1985. Parking will also extend to nearby Roxy Place. Terwilliger & Bartone hosted an open house at the Knights of Columbus in August to meet with residents and gather their input on the project. The firm then developed a site plan, which it went public with at an Oct. 21 hearing, at which residents could ask questions.

Residents generally favored the project, noting that it would be smaller than the previously proposed Cornerstone.

Capri General Manager Harry Wagner said the owners were willing to sell the property to Bartone because they thought it was time to move on, but they were open for business for now. He also decried the village’s claims of illegal activity there. “There’s never been a violation in court that we lost,” Wagner told the Herald Monday afternoon, before the board’s vote. “We appealed everything that [the village] had suggested, because many of these alleged code violations were outside the grounds, a mile away.”

The project developers will meet with the Lynbrook Zoning Board on Dec. 12 to seek variances for the apartment complex. If the variances are approved, the motel will be razed in the spring, and construction is estimated to take 18 months.