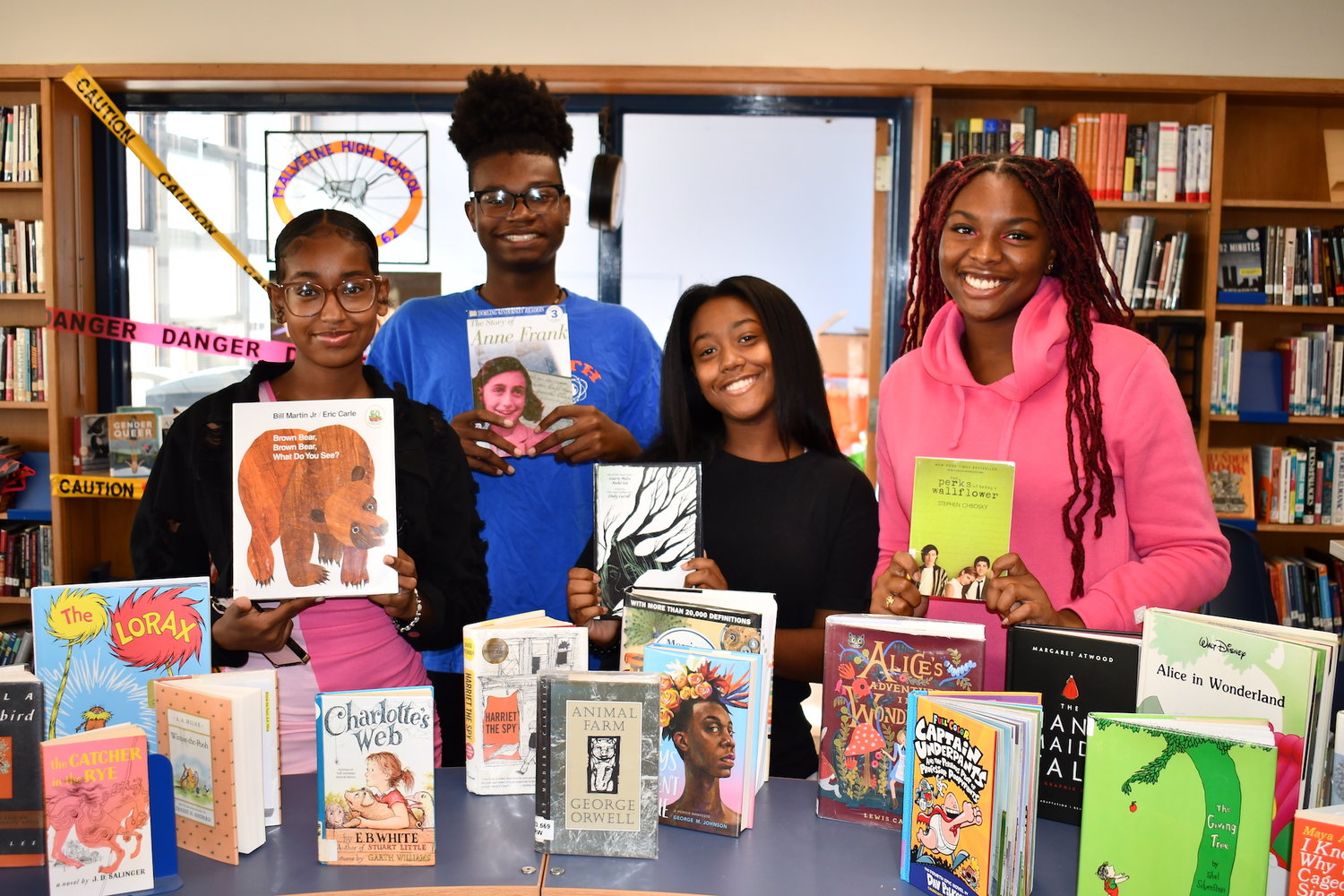 Students at Malverne High School with books that have historically or recently been challenged or banned. The display recognized the American Library Association’s Banned Books Week.
Courtesy Malverne School District
By Kyle Chin

As schools, libraries and other institutions across the country recognized Banned Books Week in the last full week of September, students, teachers and administrators at Malverne High School also chose to mark the week with a display of banned books.

The American Library Association started the tradition of Banned Books Week in 1982, recognizing books and authors who have been the subject of challenges in the past and present.

Historically, books have been challenged for plenty of reasons in many different parts of the country. The issue has gained renewed attention in recent years as books purportedly promoting LGBT themes or “critical race theory” have been scrutinized, most often by socially conservative parents wishing to shield their children from such content.

“This is a dangerous time for readers and the public servants who provide access to reading materials,” Deborah Caldwell-Stone, director of the ALA’s Office of Intellectual Freedom, said in a public statement. “Readers, particularly students, are losing access to critical information, and librarians and teachers are under attack for doing their jobs.”

The recent trend has not gone unnoticed by educators at Malverne High School. While Banned Books Week is an annual tradition, the recent string of book banning throughout the nation gave this year’s activities even more weight.

“This is not a new thing that the American Library Association does,” Jason Mach, the school district’s supervisor for humanities, said. “But you hear about it a lot more today, and it seems to be a lot more prevalent in the media today, whether it’s school boards or it’s libraries that are deciding to restrict their shelves.”

Senior Library Clerk Jacinta Bowman primarily arranged the display in the library at Malverne High School. The display included a wide array of books from all genres, and Bowman attached an explanation behind the challenge or ban each of the books faced behind the front covers for students to read.

While the high school library primarily stocks young adult books, Bowman also collected some children’s books that have been challenged as well.

“I got some of the children’s books, because I know that they would look at these books and say, ‘Oh my goodness, this is a book I loved since I was a kid,’” Bowman said. “‘Why is this banned?’”

One such book was “Captain Underpants,” she said. “The main character of the story is half-naked,” Bowman said. “They said they use foul language, which is ‘poopy,’ and they said that it was basically inappropriate for boys and children of that age.”

“Charlotte’s Web” was also among the collection, said Bowman, who noted that it was challenged because, “it was ungodly to have animals talking.”

Sitting alongside these classic children’s books were more serious works that have been more recently challenged.

“I found Jerry Craft’s ‘The New Kid,’ which is his autobiography,” Bowman said. “That one was challenged and banned in Texas because they thought it was teaching critical race theory.

“One of the other books is ‘Gender Queer,’ and there’s another one called ‘All Boys Aren’t Blue.’ Of course, those are there because they represent LGBTQ books.”

Mach said Malverne High School’s English and social studies teachers brought their students to the library throughout Banned Book Week to hear a lesson on censorship and book banning,

Bowman said that interest among students in the banned books persisted even after the end of Banned Book Week, and they continued to ask her about the books when they stopped by.

“I think that when they are told, ‘This is something you shouldn’t read,’ then they want to read it,” Bowman said.

Mach reflected on the issue of banned books more broadly.

“You have the ability to choose what you like to read, and in the case of a library, you don’t have to read what you don’t want to read,” Mach said.

“The opportunity to experience as many viewpoints as possible, and even understand why someone would say, ‘This book isn’t appropriate,’ and try to look at it from their point of view ... I think that helps to create people with character who are capable of thinking critically.”

Bowman echoed his thoughts, adding, “I think that we have to make sure that we know where this is coming from, and not let it affect what we allow kids to read. I feel they should have both sides of every story, and if we take away their choice, then there is no side.”

From Uniondale to Carnegie Hall

Looking into the future at Hewlett-Woodmere School District

This robotics team at Hewlett stood out at the competition