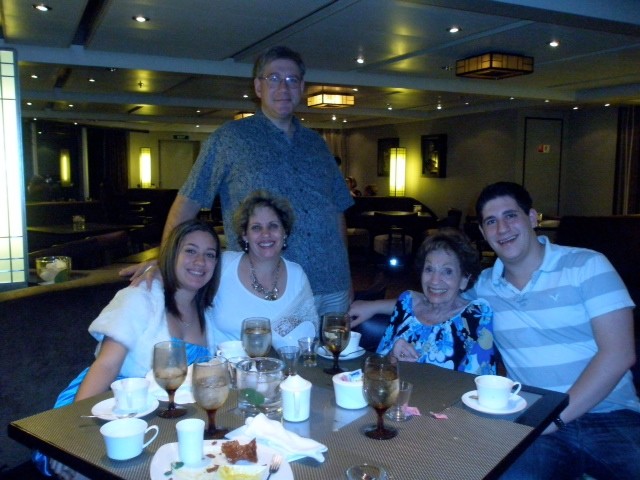 Bronx native and Woodmere resident Marcia Abramson succeeded academically and professionally during a time when it was less acceptable for women. From left were Maris Wasser, Jill Abramson-Wasser, Stuart Wasser, Abramson and Bradley Wasser from a 2013 cruise.
Courtesy Jill Abramson-Wasser
By Vanessa Parker

Marcia Abramson, who wrote the “On the Road Again” column for the Nassau Herald and longtime Woodmere resident, died on July 4. She was 88.
Born in the Bronx on Nov. 11, 1925, Abramson spent her childhood in Brooklyn and grew up during the Great Depression.
“Times were hard but my mother persevered,” said Abramson’s daughter, Jill Abramson-Wasser. “She loved to learn. She studied hard and was a voracious reader. She skipped grades in elementary school and took classes in the summer so she could graduate from high school early. She was the first in her family to go to college. Remember, this was the 1940s, where this wasn’t the norm, especially for women.”
After attending Brooklyn College, Abramson pursued a career in social work, and was planning to continue her education when she met her husband, Martin Abramson. May 9, 1948 was a special date for two reasons, according to Abramson-Wasser. “Not only did Israel become a state but the infamous writing team of Marcia and Marty began,” she said. “They were married for 50 years when he passed away in 1998.” The duo wrote several magazine articles together, including the travel column for the Herald.
Using her writing skills, Abramson did public relations work for the Catskills Mountain resort Grossingers and the fast food restaurant franchise Nathan’s Famous Hot Dogs, while staying close to her social work roots. “She would collaborate with one of her best friends, Justice Bea Burstein, ‘Judge Bea’ to me, in helping troubled women get a new start,” Abramson-Wasser said. “Working with the judge introduced her to Nassau County politics as she learned to work political campaigns.”


Karen Burstein, a lifelong family friend, said that when Abramson began working, many middle class Jewish women either stayed at home or pursued careers in whatever work was allotted to them. “Marcia wanted to write, and to be a press person, and to be active in politics,” she said. “It never stopped her though at the time it was unacceptable. Marcia Abramson was one smart cookie, one tough, politically savvy and honorable cookie.”
Through her work in politics, she met Carol Berman, a Lawrence resident, who served as the state senator of the ninth district from 1979-1984. “Not only did she run Carol’s district office when she was elected to the New York State Senate but Carol and Jerry Berman have also remained dear and lifelong friends,” Abramson-Wasser said.
Berman said that she will remember Abramson for her passionate political discussions with her friend, as well as her ability to cook up a delicious meal and their shopping trips together. “It’s very tough to put aside a big chunk of your life, as the memories are still very clear and whirling around you,” she said. “Marcia and I fared many adventures together.”
Abramson is survived by Abramson-Wasser and her husband, Stuart; and her grandchildren Bradley, his wife, Sarah, and Maris. Her husband, Martin, and her son, Barry, predeceased her.
A funeral service was held on July 8 at Boulevard Riverside Chapels in Hewlett. The family sat shiva, the traditional Jewish mourning period, at the Abramson-Wasser family home in Roslyn Heights through July 13. Interment was at Mount Judah Cemetery in Ridgewood, Queens.
“Marcia was so much a part of my family’s life, so important to us,” Burstein said. “She was a great family person, so proud to have a girl. She was so besotted with Jill. This woman who was strong, a feminist and a progressive wanted to make sure her daughter was as proud, as strong, and as capable as she. And she is.”