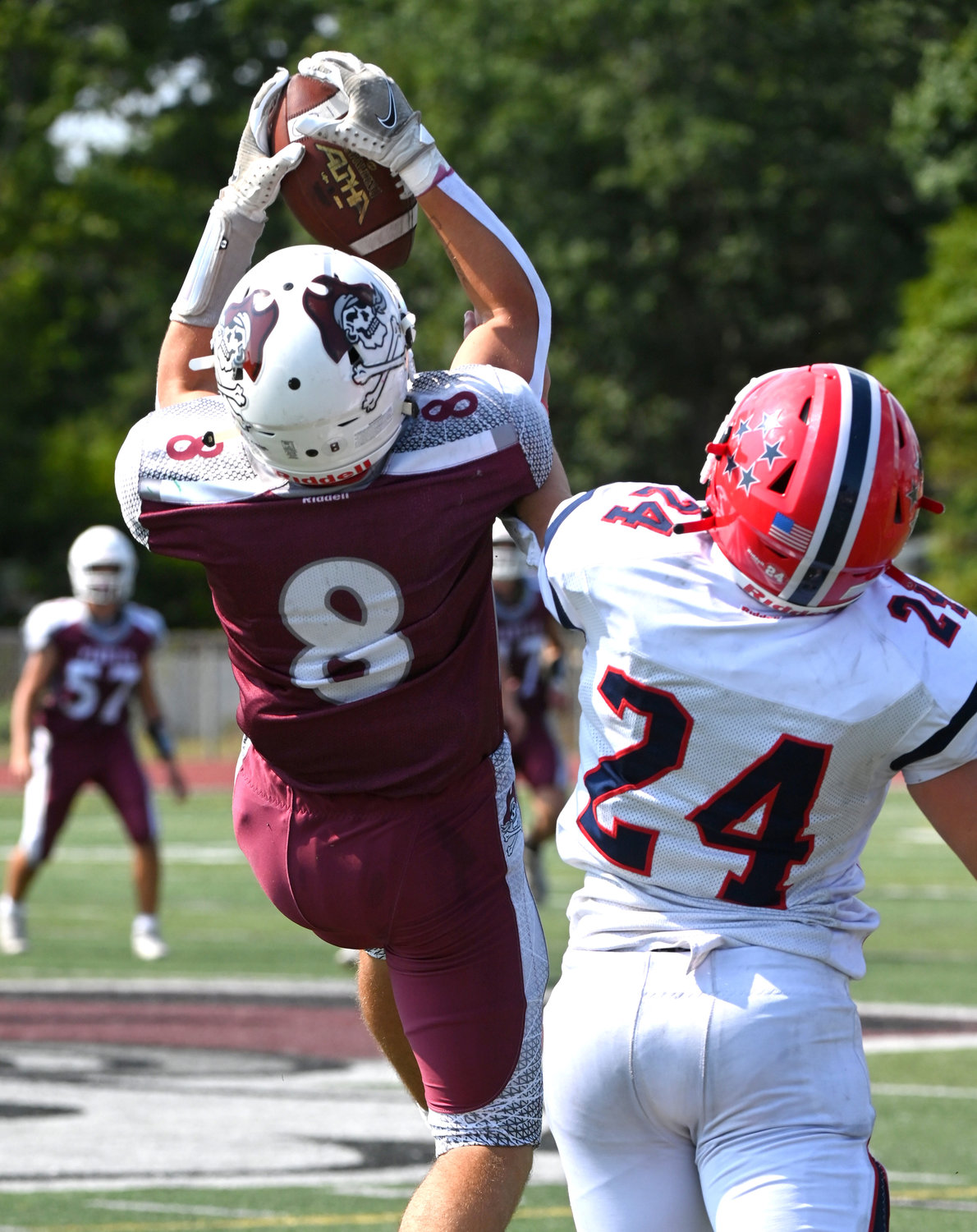 An early goal-line stand last Saturday triggered quite the turnaround for Mepham in its rematch with MacArthur from last season’s Conference II football playoff setback.
After MacArthur reached the Mepham two-yard line with an over eight minute opening drive, senior linebacker RyanThier stuffed a fourth down run. The Mepham offense then drove 98-yards the other way capped by a Thier one-yard touchdown early in the second quarter that set the tone for a convincing 42-0 win 10 months after MacArthur had ended the Pirates’ 2021 season with a 21-18 win in the Conference II semifinals.
“The playoff game last year was on all the kids’ minds and it is something that was a bit of a rallying cry for us all summer,” said Mepham head coach Matt Moody, whose team fell to MacArthur at Hofstra’s Shuart Stadium despite out-gaining them 354-196. “Starting in December the team printed out color pictures of that final score 21-18 and posted it all over the weight room so all offseason and during the summer as we were lifting that was a constant reminder for the kids of how hard we needed to work to never feel the way we felt on that day.”
The floodgates opened after Mepham’s defensive stand and nearly length of the field touchdown drive with the Pirates tallying another three touchdowns in the second quarter for a 28-0 halftime advantage. Thier scored his second touchdown from three yards out for 14-0 lead and junior wide receiver Steven Mulqueen made it 21-0 after a 44-yard touchdown reception from quarterback Dominick Novello.
Mepham (2-0) tallied 369 total yards on the day which included a big day from Novello, who went 8-of-9 passing for 203 yards and 50 yards on the ground. His 5-yard touchdown run late in the second quarter made it 28-0 going into the locker room.


“He does everything you need the leader of the team to do,” said Moody of Novello, who also led the team in tackles on defense with 10. “He’s the hardest working and sets the tone for how everyone else should be in practice and on game day.”
Michael Eddelson and Chris Norris also keyed Mepham’s shutout with an interception apiece. Junior Nick Sedita led the Mepham rushing attack with 73 yards and registered two touchdowns in the second half.
MacArthur brought back just two starters from last year’s 9-2 team that reached the county finals and is still working through some inexperience early on in the new season. The Generals knocked off Calhoun in the season opener, 31-7 led by 80 yards rushing and three touchdowns from senior running back Rocco Hogan.
“We had a good opening drive and we didn’t finish and they finished when they had to,” said MacArthur head coach Bobby Fehrenbach of the opening drive against Mepham. “We left them 98 yards to go and they capitalized.”
The Generals will look to return to the win column at home Saturday against Long Beach for a 2 p.m. kickoff. Mepham hosts crosstown rival Calhoun Saturday also at 2 p.m.