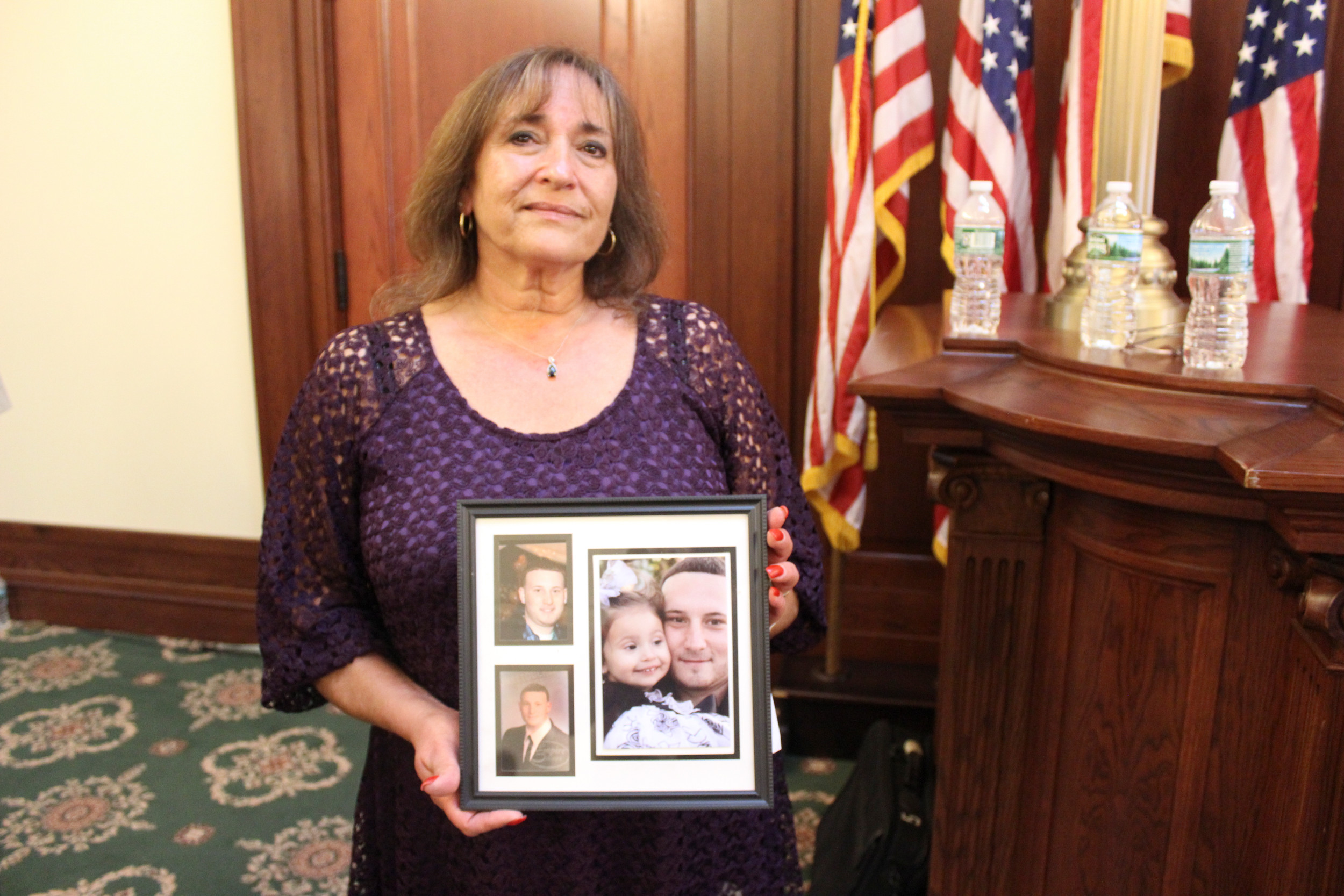 Merokean Lisa Schmidt spoke at a news conference on Aug. 24 about her son Joseph, who died of an opioid overdose when he was 20.
BRIAN STIEGLITZ/HERALD LIFE
Finding Help

If you or someone you know is struggling with addiction, there is help.

All opioids listed in cause of death

Heroin listed in cause of death

Fentanyl and its analogues listed in cause of death

Cocaine listed in cause of death

Lisa Schmidt, of Merrick, lost her son Joseph to an opioid overdose four years ago when he was 20. She shared her story during a Aug. 24 news conference in Mineola, at which County Executive Ed Mangano presented the most recent data on opioid overdose deaths in Nassau.

“Mom, I have a problem,” Lisa Schmidt’s son Joseph told her late one night in 2009. She had been concerned about her 16-year-old for some time because of the company he kept, she said.

That night, Joseph admitted to his mother, “I can’t stop putting coke up my nose.”

Rehabilitation, relapse, unemployment, homelessness, robbery and incarceration, Lisa said, were all parts of a pattern that led to Joseph’s fatal overdose in August 2013. He was 20.

“Once you’re an addict, your brain is programmed and your body is craving,” Schmidt, of Merrick, said, adding that her son was on a road familiar to many who struggle with the disease of addiction.

She shared his story at an Aug. 24 news conference in Mineola, at which County Executive Ed Mangano presented the most recent data on opioid overdose deaths in Nassau.

So far this year, county officials have so far logged 68 deaths by opioid overdose, 15 by heroin and 32 by fentanyl or one of its analogues. Opioids are opiate-derived drugs, including prescription painkillers, which can be more potent than heroin.

While as of this week, overdose numbers have not reached 2016’s (see sidebar), Nassau County Chief Toxicologist Joseph Avella said there are still a number of pending cases because an uptick in drug combinations and drug analogues can make identifying an exact cause of death more difficult.

“There are drugs out there that we are actively trying to identify,” Avella said, “and that will add to the case number.”

Statistics also revealed that 18 Nassau County communities lost at least two people to opioid overdoses this year. Nine deaths were reported in the Massapequas, while Merrick had four, and Bellmore, two. Last year there were no overdose deaths reported in the Bellmore-Merrick area.

“I think it’s a problem everywhere,” Schmidt said. “There’s no safe school, no safe college and no safe age.”

Schmidt grew up in Merrick, but raised her family in Franklin Square until her son graduated from high school. Joseph was still battling addiction then, and his mother moved the family to Merrick for a fresh start. At the time, she said, the community had a reputation for being insulated from the epidemic. Roughly four years later, however, Joseph was at a friend’s apartment when he took a lethal speedball, or combination of cocaine and heroin.

“His friends didn’t know about the [Good Samaritan] laws,” so they didn’t feel safe calling 911, she said.
Since her son’s death, Schmidt has shared his story at recovery expos and events to remind people about Good Samaritan laws that can, in many cases, save lives. Enacted in 40 states and the District of Columbia, the laws protect people from legal action if they offer help in the case of a drug overdose, according to the National Conference of State Legislators.

If Joseph’s friends knew about the law, Schmidt said, “my son could have been saved.”

Lee and Lisa Kassler, of Plainview, joined Schmidt at the news conference to share their son’s story. Garrett Kassler would have been 27 this week. “Garrett loved to go to school,” Lee said. “He had dozens of friends.”

Garrett’s addiction took control when he went to college and was prescribed Xanax for his anxiety. He began abusing the medication and eventually turned to opioids, according to his father. Garrett was eventually rehabilitated, and he enlisted in the Marine Corps. After his discharge, however, he returned home and returned to drugs. In February, he overdosed and died.
Lee Kassler held up a photo of his smiling son. “This is the face of addiction,” he said.

Nassau County Police Commissioner Patrick Ryder said the epidemic must be viewed beyond deaths by overdose, however. “You can’t look at statistics in a vacuum,” he said, adding that while more individuals are being saved by Naloxone, “they’re still addicted.”

The day after the overdose numbers were announced, Long Island held its first Recovery Health and Wellness Expo at Eisenhower Park. The goal was to increase awareness and provide information for people seeking recovery.
Report an inappropriate comment