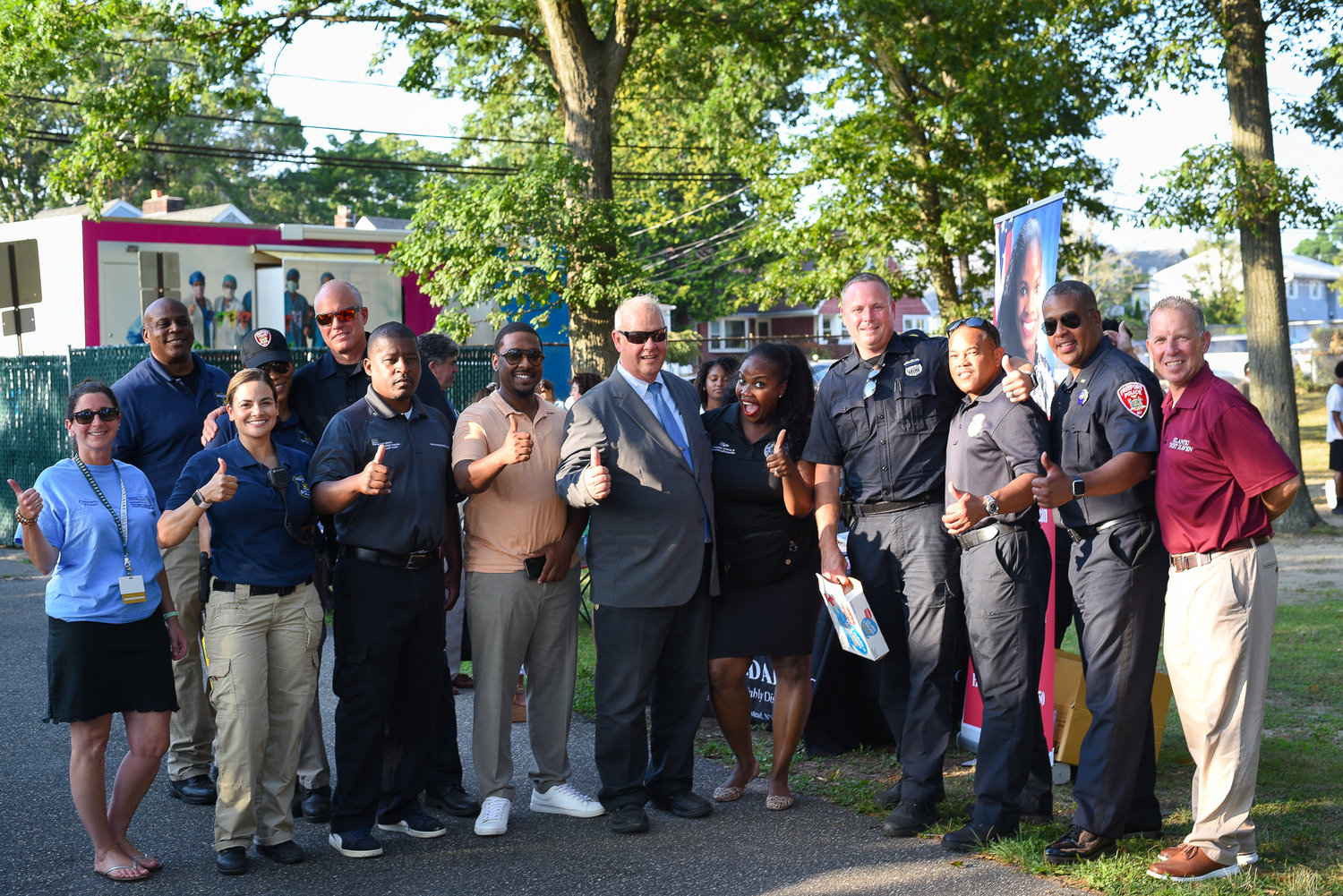 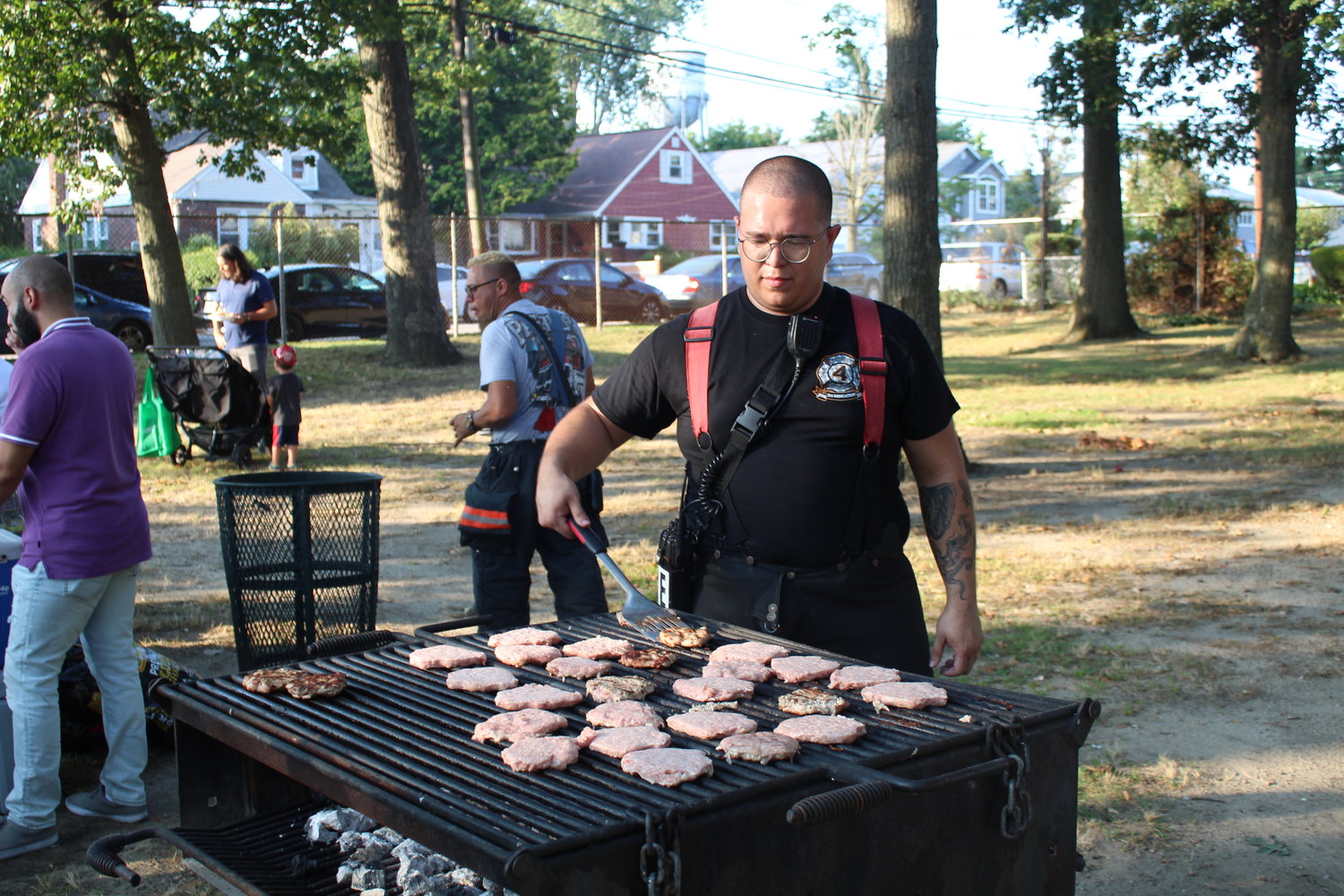 Freeport Firefighter Will Villalobos manned the grill at National Night Out on Aug. 2 at Bishop Frank O. White Park.
Mohamed Farghaly/Herald
Previous Next
By Mohamed Farghaly

Freeport residents turned out in force at Bishop Frank O. White Park to interact with first responders and celebrate the return of National Night Out on  Aug. 2.

More than 11,000 towns around the country annually participate in National Night Out to raise public awareness of the violence, gang activity, and crime that threaten local neighborhoods. The focus of this year's program was on anti-crime efforts that improve police-resident cooperation and community spirit.

The event strengthens ties among youth, parents, the government, and law enforcement organizations to fight crime and violence with an objective to create a strong sense of community.

Free food, entertainment, and raffle prizes were provided during the event, and a Mount Sinai South Nassau “Vaxmobile” was on hand to administer Covid-19 immunizations outside of the park.

Mecca Gibson, a Freeport resident for almost two decades, attended the event with her granddaughter Nori. “It's to bridge the gap, for us to meet new faces in law enforcement, for us to see new faces in the community and for us to help build better relationships across the board.”

Residents interacted with Freeport police officers and firemen. Guests were able to acquire information on a variety of county and local services, as well as community-based organizations and youth programs. For the first time, the Freeport Merrick Rotary Club attended the event.

“It's community relations between our police department, our residents and our businesses. We do it to build that relationship with the police and our people,” said Mayor Kennedy, “That's what this National Night Out is. We brought in probably 20 or 30 of our police officers, to meet the people here, to say hello, get that relationship going.”

Sal Giovanniello, the head coach of the PAL boxing facility in the park, endorsed the neighborhood gathering. “​​It's important for the community and the police to get along and this keeps everybody on the same level and the kids get to know the police with the adopt the cop. I remember that when my kids were young and participated, they loved it.”

Police Chief Michael Smith attended the celebration alongside the other members of the Freeport police force. “A lot of people never get to have any interaction with the police department. So, we try to make someone's first interaction with an officer a positive one. We don't want the first interaction to be something negative, whether it's a traffic stop, or a dispute of some sort, we want it to be a positive situation like this, where we get to say hello, and it puts more of a name and a face together. And to let them see that we are people like them.”

According to Smith, over half of the department’s current police officers either grew up in Freeport or were hired because they reside in Freeport. “A lot of them already have a bond with their family, friends, and coworkers that live in town, and I think that only strengthens the relationships that we have and hope to build.

June marked the 26th anniversary of the program. It started with six police officers who volunteered to meet with fourth-grade students at Bayview Avenue School on a regular basis in order to encourage informal connection and erase negative police preconceptions. All these years later, the program now has over 30 Freeport police officers visiting all the fourth grade classrooms in the endeavor to make a difference.

“Our officers, they volunteer their time, and a fourth grade class adopts a police officer for the year,” Smith said. “They write them letters. The police officers will attend events with them. And again, it's just another way at an early age to introduce police officers and children together, and the kids love it.”