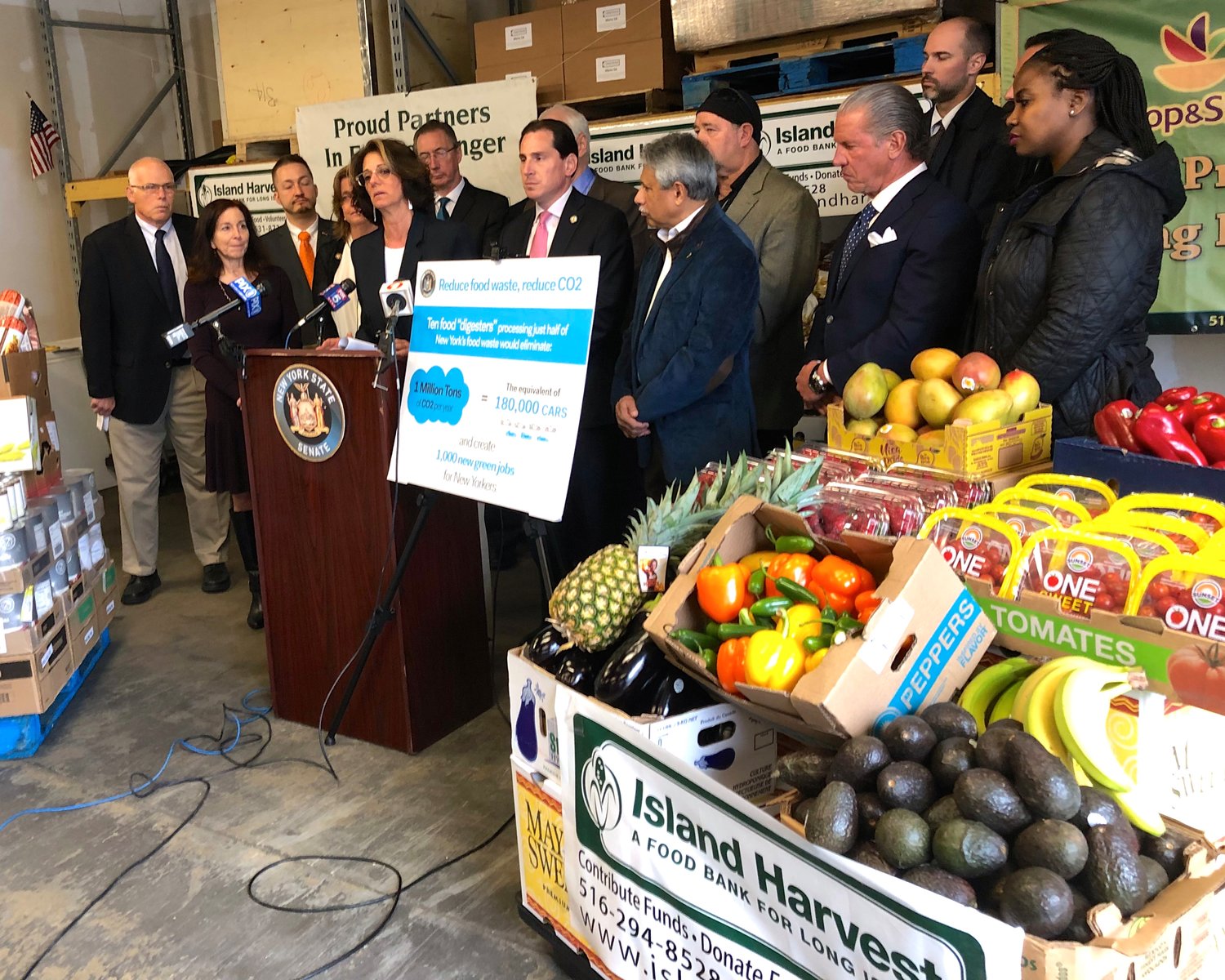 Island Harvest President Randi Shubin Dresner, at lectern, with State Sen. Todd Kaminsky to her right, was among the officials last Thursday to announce passage of a measure to reduce food in the waste stream by requiring large retailers to send unsellable but edible food to recovery organizations like Island Harvest.
Scott Brinton/Herald
By Scott Brinton

On the grounds of the 72-acre A. Holly Patterson Extended Care Facility in Uniondale is a small, white-tiled warehouse, with a handful of garage bays, operated by the nonprofit food-recovery organization Island Harvest.

More such warehouses will likely be needed in the near future, according to Randi Shubin Dresner, president and CEO of Island Harvest.

That’s because the New York State Legislature and Gov. Andrew Cuomo passed a measure in their April 1 budget agreement mandating that large commercial food retailers donate excess food that has not sold to groups like Island Harvest, which redistributes it to food pantries and soup kitchens to help feed those in need. The law is to take effect in 2022.

State Sen. Todd Kaminsky, a Democrat from Long Beach, and Assemblyman Steve Englebright, a Democrat from East Setauket, championed the measure, and as the environmental chairs in their respective houses, worked to ensure its passage. The lawmakers convened a news conference at the Island Harvest facility last Thursday to announce passage of the law. They were flanked by fellow lawmakers, food-recovery leaders and environmentalists.

The measure, Shubin Dresner said, “is a win-win for all New Yorkers in protecting the environment and providing critical food support for nearly 2.8 million people across the state, including 300,000 Long Islanders, who struggle with food insecurity every day.”

The measure also requires that food scraps generated by large retailers — defined as supermarkets, restaurants and universities selling two tons or more of food per week — be sent to anaerobic digesters, instead of landfills or incinerators, for processing. A digester, according to the measure, must be within 25 miles of the retailer.

An anaerobic digester breaks down scraps and rotten food and converts it to natural gas, which can be sold as fuel or used to produce electricity.

There are now 13 digesters throughout the state. Most are used to process farm waste. The first digester to process food scraps from retailers is to be built in Yaphank, in Suffolk County, by Westbury-based American Organic Energy. Construction of the facility is to begin in September and will be complete within 10 months, according to a company official.

The facility will be capable of processing 180,000 tons of food scraps per year, according to Charles Vigliotti, AOE’s president and CEO. Of food waste, he said, “Give it to us. We’re going to make gas out of it.”

Each year, New York grocery stores, restaurants and other facilities produce 3.9 million tons of food scraps. Food waste comprises roughly 20 percent of the waste stream, according to Kaminsky. The scraps are either trucked to out-of-state landfills, some as far away as Virginia, or sent to incinerators like the Covanta-Hempstead plant in Westbury, off the Meadowbrook Parkway.

Trucking the waste to faraway landfills sends untold amounts of carbon dioxide streaming into the atmosphere from the trucks’ exhaust pipes, Kaminsky and others said. Carbon dioxide is among the chief greenhouse gases that are causing climate change, the steady heating of the Earth over time, according to scientists.

Dumping the food scraps into a landfill also causes the release of methane gas as the waste decays over time. Methane, too, is a greenhouse gas, but 30 times “more potent” than carbon dioxide.

Long Island must develop plans to reduce the size of the waste stream, in no small measure because the massive Town of Brookhaven landfill will close in 2025, said Adrienne Esposito, executive director of the nonprofit environmental organization Citizens Campaign for the Environment, based in Farmingdale.

“Clearly, we need to stop biting off more than we can chew,” Esposito said with a laugh.

Passage of the Kaminsky-Englebright measure ensures “the further reduction of both poverty and carbon footprints by getting healthy food safely to our at-risk population,” said Syd Mandelbaum, founder and CEO of Rock and Wrap It Up!, a national nonprofit food-recovery organization, based in Cedarhurst.

Penalties for retailers that do not comply with the law were not specified. They will be determined by the State Department of Environmental Conservation using current environmental law as a guide, said an aide to Englebright.
Report an inappropriate comment