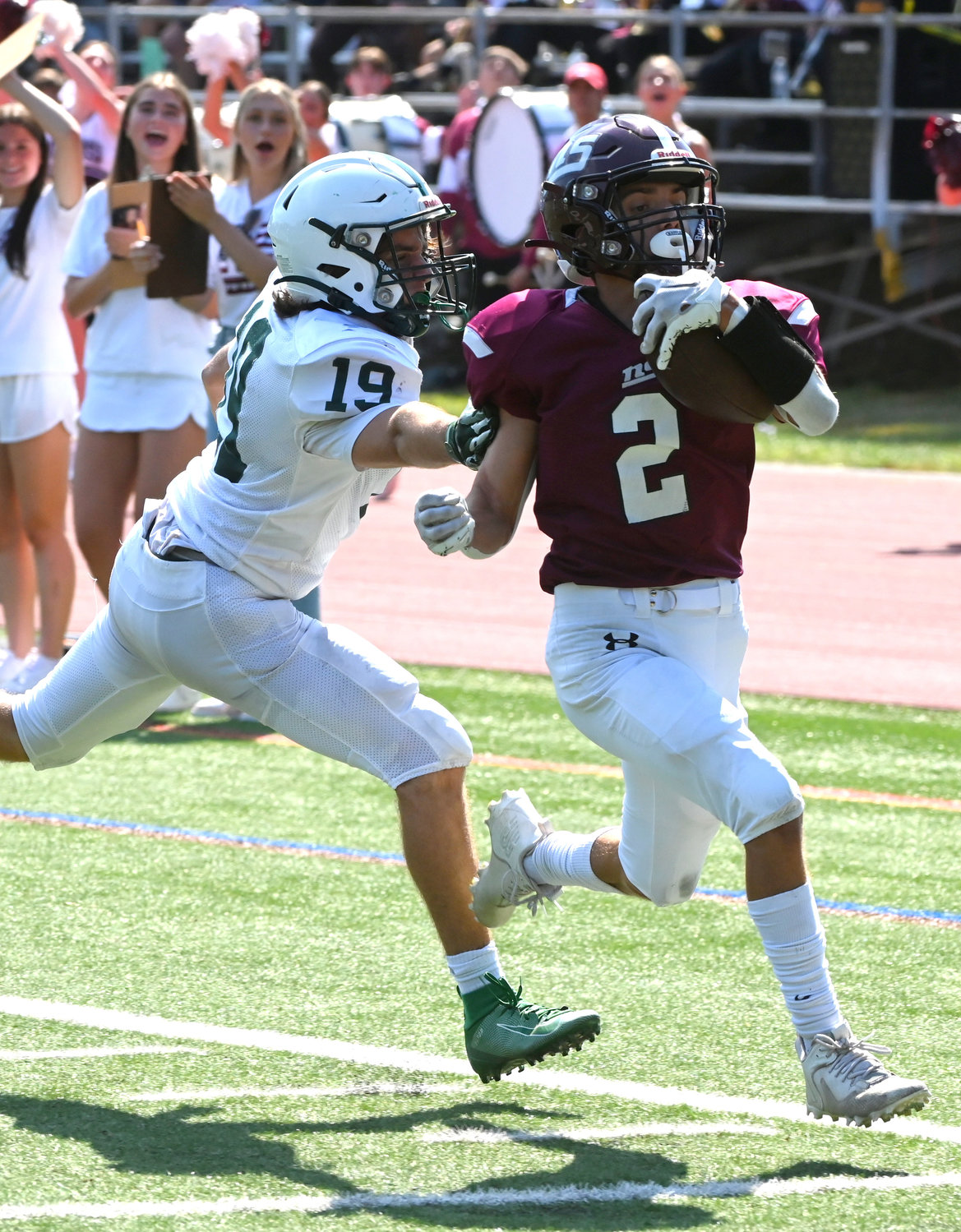 If last Saturday is indicative of its football season, North Shore High might want to make more room in the trophy case.
Coming off the school’s first-ever Long Island championship, the Vikings rolled with confidence and dominance in their season opener in Glen Head, routing crosstown rival Locust Valley, 41-6.
The bleachers were packed, standing-room only, with anticipation high regarding what the defending champs in maroon can do as an encore.
“This feels really good,’’ said fullback-/linebacker Ryan Freund, one of the standouts in the opener. “We played very well as a team and it showed on the scoreboard.’’
North Shore racked up 412 yards on the ground. Though it felt like a homecoming crowd, there was no pomp and circumstance before kickoff. The school held a ring ceremony for the players at the Glenwood Landing Firehouse during the spring.


North Shore officials wanted no distractions. All the energy last Saturday would be spent on the field for a new season.
“We expected to play well but we didn’t expect this explosiveness with our big plays,’’ North Shore head coach Dan Agovino said. “That’s what impressed me.’’
The Vikings have returned most of their key cogs despite losing star offensive lineman Reece Ramos to an ACL tear. The maroon’s favorite status hardly goes unchanged, even if Locust Valley is in rebuilding mold, off a 2-6 season, with a first-year coach in Michael Gilbert.
A key to the 2021 championship, running back Nick LaRosa bulled for 137 yards on 9 carries for two touchdowns. LaRosa ripped off four runs for 20-plus yards.  “He’s a workhorse,’’ Agovino said. “He’s got the power of a fullback and moves of a tailback.’’
But the most vibrant performance came from Freund, who excelled on both sides. Lining up at fullback, he caught a 33-yard touchdown pass from quarterback Peter Liotta with 7 seconds left in the half.
Freund also delivered a monstrous block to spring Nick Livoti for a 23-yard touchdown on a sweep to the left. Livoti sailed in untouched.
“His block was awesome,’’ Agovino said of Freund. “He was unbelievable on both sides of the ball. His blocking and tackling were unbelievable.’’
At linebacker, Freund racked up 12 tackles. Last season he played outside linebacker but has switched inside. “I was more proud of my defensive performance, but that was because my teammates made it easy for me to make the tackles,’’ Freund said.
Freund said the outside defenders did their jobs well in funneling Locust Valley’s runners into the middle, making it a bountiful day for the senior.
Out of the backfield, Freund caught two balls for 48 yards. His 33-yard touchdown catch after grabbing it at the 15-yard line capped a perfect 67-yard drive in the closing two minutes.
It was commandeered brilliantly by Liotta, whose emergence as their quarterback in midseason keyed the title run. Agovino was thrilled the way Liotta showed poise – with two timeouts and 1:43 left – guiding the last-second score.
Liotta completed 6 of 9 passes for 73 yards and a touchdown. He also showed his wheels, too, rushing for 121 yards on 8 carries and a TD.
The score ballooned to 34-0 at halftime and 41-0 early in the third quarter before North Shore hit the brakes.
Next up is Malverne, a larger test. The Vikings beat the Mules twice in 2021 – once late in the regular season, then the first round.
“It might be tougher, but if we play as a team, play off each other, it doesn’t matter who we’re playing,’’ Freund said.