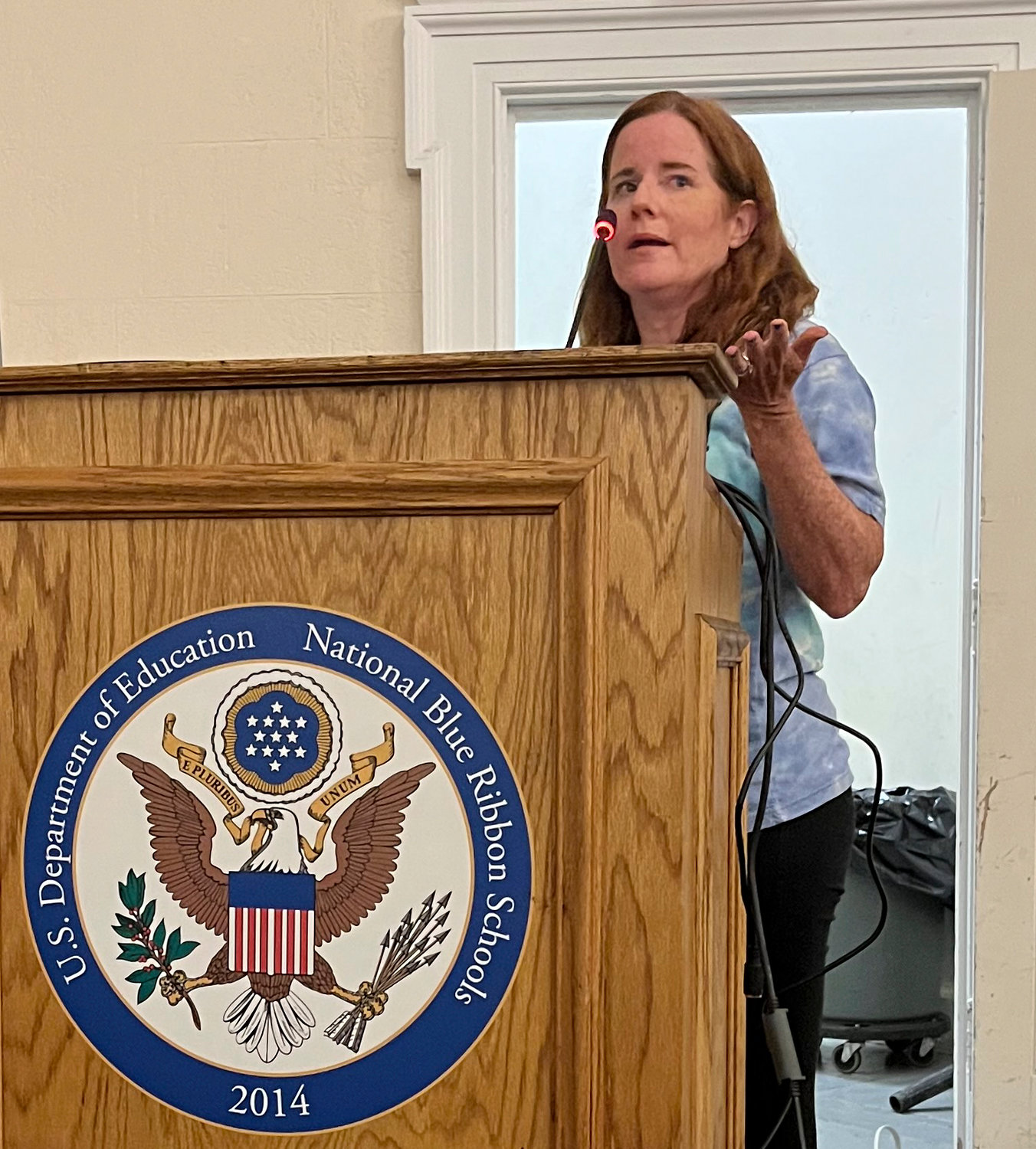 Amy Solomon, of Glen Head, was one of numerous community members who spoke for the need for unity in the North Shore School District.
Will Sheeline/Herald

We are all making sacrifices, and we’re in this together.”
Melissa August, Glen Head
By Will Sheeline

With the settlement of the LIPA case and the incoming hit to the North Shore School District’s revenue, tensions have been running high amongst residents of the district on the issue of the tax levy. Despite this, residents from all three of the communities appear to see this as an opportunity not for further division, but as a chance to come together to face the trying times that lay ahead.
While the current tax levy has been set at roughly $86 million, it is still unclear how much will be paid by residents of the district. This number will not be public until mid-September, and will be set by the Nassau County’s government, not by the district.
However, previous estimates have shown that residents will likely be paying between $900 and $2,400 more a year going forward, depending on the valuation of their property. This has led to rising tensions over the years, some of which boiled over at the Aug. 1 Board of Education meeting when the tax levy was discussed.
During public comment, several residents lambasted some board members on a wide range of topics, with several accusing individual or multiple trustees of lying or misrepresenting information. One exchange between Roger Friedman of Sea Cliff and trustee Marianne Russo became particularly heated, causing Dave Ludmar, the board’s president, to step in to remind board members that they aren’t allowed to respond to public comment.
However, many attendees showed their support for the board’s efforts, and sought to shift the focus to a more positive direction. Dominick Fortugno, of Glen Head, pointed out that despite the challenges he was glad to see multiple opinions being expressed by the board, even if sometimes things got out of hand.


“This is a really difficult time for our community, this is a really challenging time for our community, and no doubt it’s going to be a very contentious time for our community,” Fortugno began. “And as much as the conversation may get heated it’s very heartening to see a variety of voices, to hear talk about a balance between cost-cutting and relief.”
Melissa August, also of Glen Head, further emphasized this sentiment when she spoke. “Nobody’s going to win under these circumstances. We are all going to pay more taxes, and those of us with kids in school are going to have cuts to the things that we hold dear,” August asserted. “We are all making sacrifices, and we’re in this together. Nobody up here is going to ‘win,’ nobody up here is trying to ‘win.’”
The Herald also reached out to numerous community members after the meeting to ask them about their thoughts on the tax levy and the situation. The response was resoundingly similar, with residents echoing the sentiment that while they know hard times are coming, they intend to stand together as a community, and that ultimately the focus should remain on the welfare, well-being and education of the students.
Ann DiPietro, of Sea Cliff, mentioned that although she no longer has any children in the school district, that they benefited from the incredible education offered there. Because of this, she said she and her husband Dan are willing to accept the higher taxes to give other children the same opportunities that the DiPietro children had.
Report an inappropriate comment