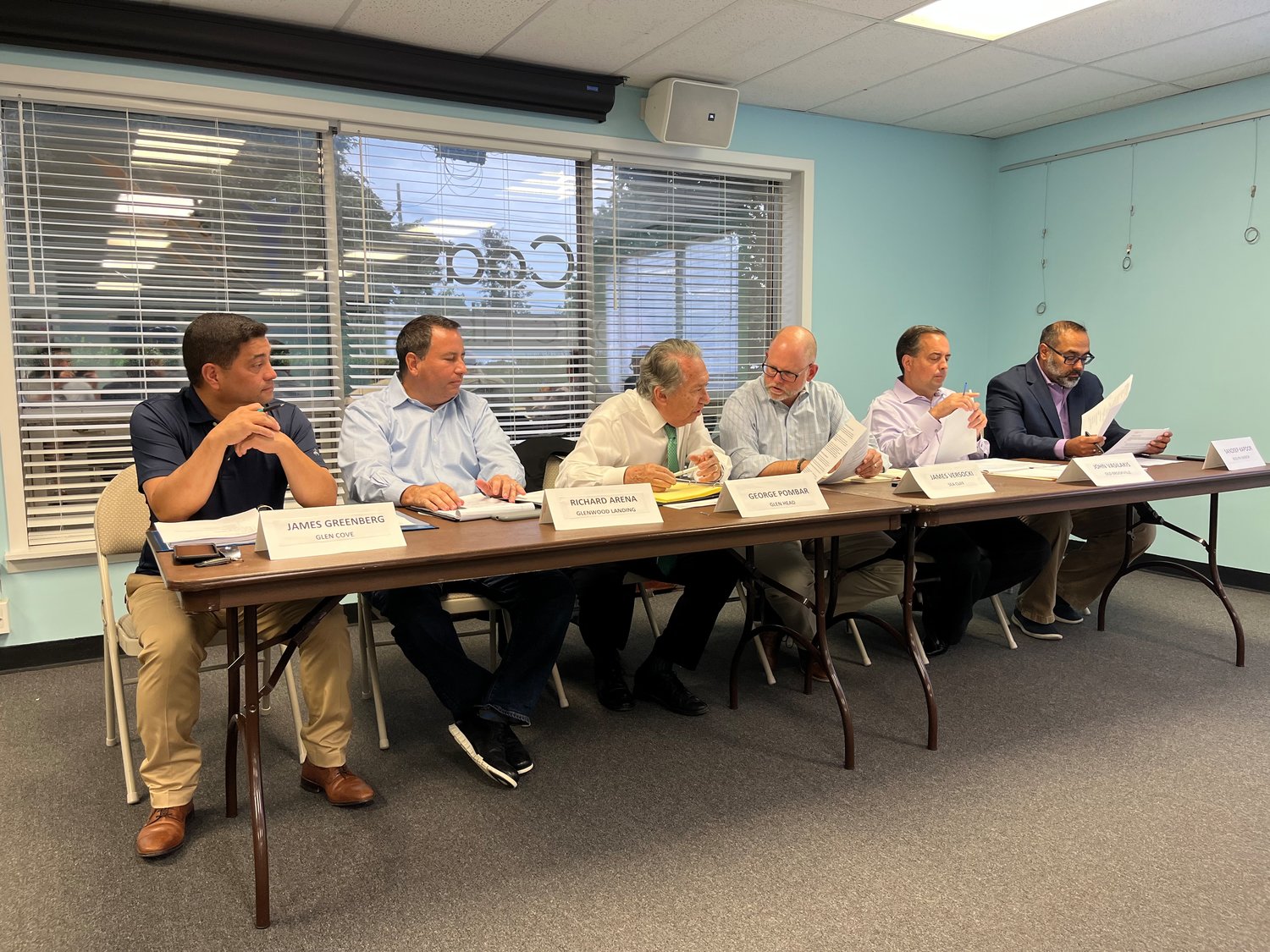 The North Shore Water Authority met on July 18 at the Gold Coast Public Library’s Annex, which will serve as the Authority’s meeting spot for the indefinite future.
Will Sheeline/Herald
By Will Sheeline

The North Shore Water Authority met for the third time on July 18 to address the public regarding their progress in municipalizing the local water district. The Water Authority explained that they have been seeking alternative funding as well as support from the Suffolk County Water Authority while they wait for their initial funding to come through, in addition to other announcements.
This was the first NSWA meeting to be held at the Gold Coast Public Library’s Annex, which will serve as the group’s headquarters for the immediate future. Previously, the group had intended to hold each meeting at a different community center, to reflect the egalitarian nature of the authority, but residents had pointed out the difficulty of trying to find out where the new location would be for each meeting.
The Water Authority is currently still in the “phase one” stage of the municipalization process, which effectively means they are gathering information and setting the groundwork, while they wait for the state-funded $1 million to arrive. In the meantime, they are exploring alternative options to secure funding so they can begin hiring personnel and establishing the Water Authority as a fully functioning government entity.
Their main avenue for doing this has been through soliciting financial, legal and advisory aid from the SCWA, which provides water for 1.2 million residents of Suffolk County and has been operating since 1951. George Pombar, the NSWA’s Glen Head representative, explained that seeking assistance from their Suffolk counterpart has been the Water Authority’s Plan B from the start, as the SCWA has extensive experience in the type of work the NSWA is trying to accomplish.
“We’ve put together a list of request of services, administrative services we’ve called it, to the Suffolk County Water Authority,” Pombar said. “We had about eight points we wanted to discuss with them, primarily legal advice and accounting advice, filing reports and so on.”


SCWA has been amenable to the requests. Representatives James Versocki, of Sea Cliff, and James Greenberg, of Glen Cove, visited SCWA on Thursday to get a better understanding of their operations and to secure legal and administrative advice and support.
“We are looking for administrative services from the Authority,” Versocki said. “They provide such services to other governmental entities, exclusively involving water, including some other entities out in Suffolk County, so it’s a really interesting concept.”
The NSWA is continuing the process of setting up its organization, appointing Glenwood Landing representative Richard Arena as their CEO and Old Brookville representative John Vasilakis as reporting individual for the purposes of filings with the Authorities Budget Office of the New York State Comptroller’s Office. While these titles are largely informal in nature, they will allow the NSWA to have a direct line of communication with these and other governmental offices which require these sorts of titular designations to establish a dialogue and continue the Water Authority’s ongoing efforts to secure funding.
During public comment, several people asked about the state of the NSWA’s progress. Joseph Capozzi, of Glen Head, she he was concerned that the tax liabilities from the municipalization process would negatively affect financially at-risk families and retirees.
In addition to assurances from Authority members that the potential municipalization is still at least 18 months away and may not occur if it is found to not be in the best interests of the community, a long-term standard-bearer in the fight against Liberty Utilities, Agatha Nadel, reminded the group of how bad current rates are, and what exactly they’re fighting for.
“Just a reminder to the folks that are here tonight, yes this has to be in the best interest of the community, we have to fight for all the money, but you are paying taxes on the amount of water that you use that those with public water don’t pay,” Nadel asserted. “Liberty will never lower its rates, so if you’re paying five times more now, 10 years from now you’re going to be paying 10 times more.”
Report an inappropriate comment