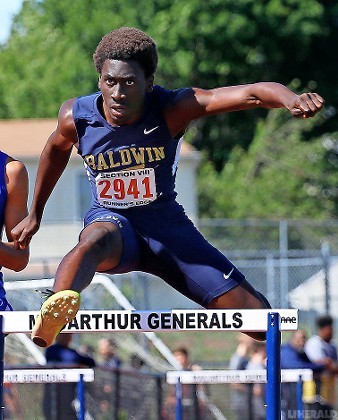 Baldwin's Russell Johnson placed sixth in Nassau Class AAA in the 400 hurdles after a second-place showing in the Division 1B meet.
Sue Grieco/Herald
By Joe Galotti

High jumper Ben Ross has shown vast improvement over the course of his career with the Baldwin track and field team, and last Friday took perhaps his biggest leap forward yet. Ross took first place in the varsity D1 high jump event at state qualifiers, reaching a height of 1.93m to earn the chance to compete upstate.

“When Ben started this whole process, it didn’t look like much,” Bruins head coach Rich Carroll said. “Then Ben started studying and went to quite a few high jumping camps. Coach (Paul) Schaefer, who is very knowledgeable in the high jump, helped him out tremendously, and he has really just started to come along.”

Ross was one of several Baldwin athletes to compete at the state qualifier. While the senior was the only event winner, many others on the team had noteworthy efforts.

Will Salmon came up just short of winning the Varsity D1 1600 meters race, despite posting one of the top running times in school history. Salmon ran a 4:19 in the event, which was the seventh fastest mark on the Bruins all-time list. The senior also finished in second place in the 3200 meters finals, with a time of 9:38.51

Baldwin was competitive in the finals of the 100-meter race at qualifiers as well, with senior Matthew Washington finishing in third placed with a time 11.12. Senior Frank Mulvey earned fifth place in the 800-meter finals for the Bruins, with a time of 1:59.83.

Other results from the day for Baldwin included a sixth-place finish by junior Russell Johnson in the 400-meter hurdle (36-inches) final and a fifth-place finish by the 4x800 relay team of Salmon, Mulvey, senior Dylan Lee and sophomore Brian Scannell.

Last Friday proved to be a bittersweet day for Carroll, as he saw the high school careers of several key senior athletes on the team, including top distance runners Salmon, Moldi and Lee, come to a finish.

“There’s going to be a big void with these guys graduating,” Carroll said. “They all did remarkable things this year, and it’s very tough to lose them. Time wise our kids did great, but unfortunately there were kids that did better.”

Carroll has high hopes for the program’s future, and expects big things moving forward from runners like Scannell, sophomore Evan Batsford and freshman Liam Graff. While the future is bright, the coach also acknowledges that replacing some of his exiting high-character athletes will be a challenge.

“These kids are self-motivated,” he said. “You just have to tell them what to do, and they get the job done.”

The season is not quite over for Baldwin yet, as another one of the Bruins high-character athletes, Ross, now advances to compete in the state finals.

“Ben is involved in so many things in the community, and is such a great team leader,” Carroll said. “He’s a respected kid in the school, and a phenomenal person. Right now, he’s on cusp of hitting 6’8. He’s right there, he’s just got to catch a good break. I think he can do that upstate next week.”