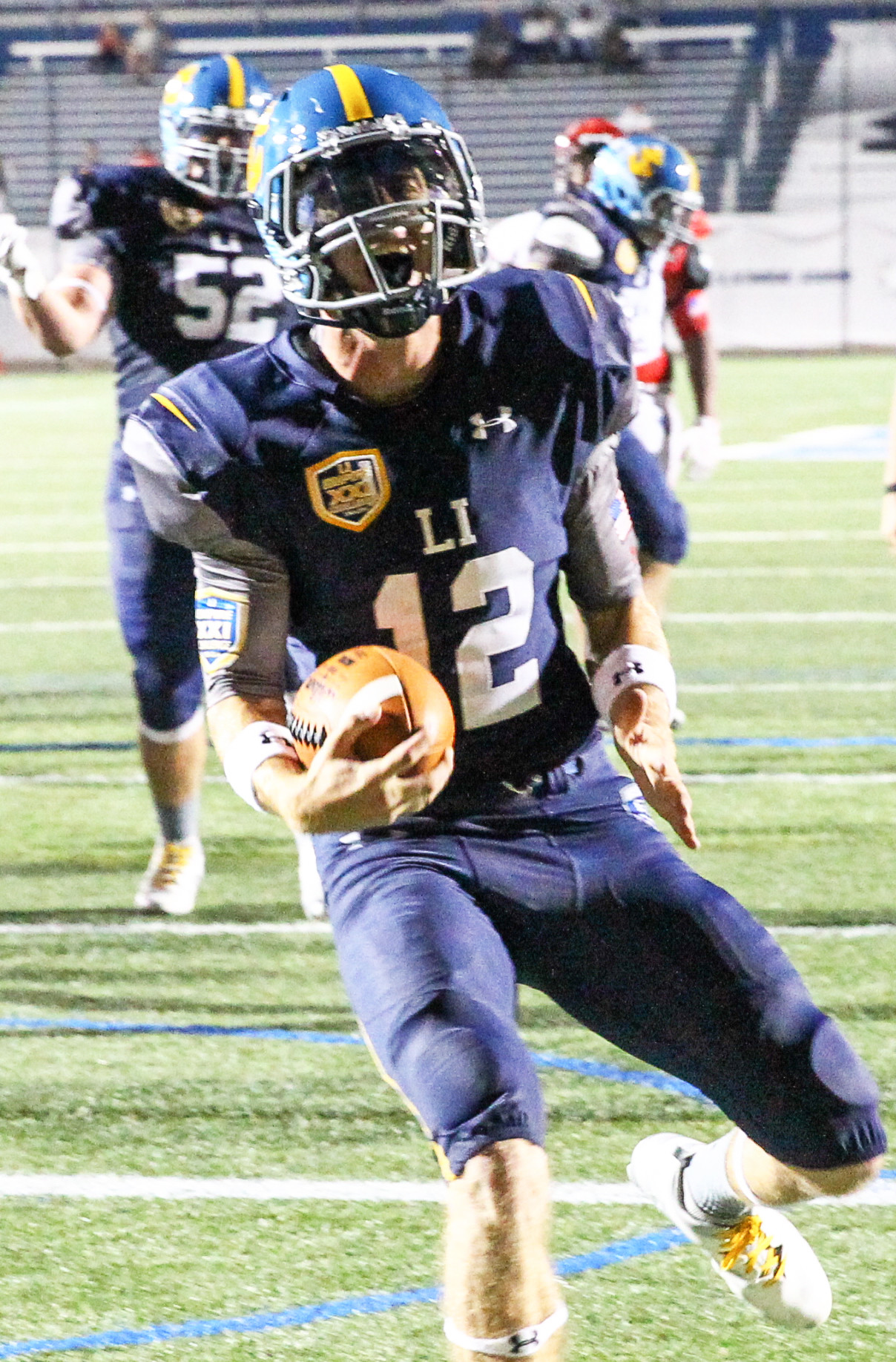 Quarterback Mike Catanese, of Carey High School, earned MVP honors for Long Island. He threw for 163 yards and one touchdown and ran for a score.
Peter Frutkoff/Herald
By Tony Bellissimo

One snap away from defeat, Harris-Legree, of Grand Street Campus, connected with Jordan Hannah (Lincoln) in the corner of the end zone for a 19-yard touchdown on fourth-and-9 with 22 seconds remaining to lift New York City to a thrilling 39-34 victory before a crowd of 7,145 at Hofstra. It was the third passing score for Harris-Legree, who completed 24 of 33 passes for an Empire Challenge record 371 yards and added a rushing touchdown on the way to MVP honors.

“The coaches believed in me and put the ball in my hands to do damage, and we got the win,” Harris-Legree said. “The winning play was just a wonderful catch.”

One of Harris-Legree’s counterparts, Carey’s Mike Catanese, also stood out and had Long Island in position to continue its recent dominance after hooking up with Infinite Tucker (Huntington) for a 12-yard touchdown with 1:46 to go. Plainedge’s Dylan Burns booted the extra point for a 34-33 lead, but plenty of time remained for Harris-Legree’s finishing touch.

“It was an outstanding back-and-forth game with great quarterback play on both sides,” said Long Island head coach Joe Piccininni (Newfield), who led a staff that included MacArthur’s Bob Fehrenbach and Oceanside’s Rob Blount. “The kids played their hearts out,” he added.

Established in 1996, the Empire Challenge showcases some of the best football talent in the state and benefits the Boomer Esiason Foundation for cystic fibrosis, the Gunnar H. Esiason Scholarship Fund at Hofstra, and local youth sports programs. The game has raised more than $2 million since its inception. “It’s a night when we acknowledge the outstanding skills of the coaches, the athleticism of the players, and the strength of the football programs in our area,” Boomer Esiason said.

Catanese earned MVP honors for Long Island, which won last year’s meeting, 34-27. He went 10-for-19 for 163 yards and had more than half (33) of the team’s 65 rushing yards as well as a 14-yard touchdown on the ground that provided a 27-20 lead with 2:35 left in the third quarter. Ryan Klemm (Newfield) added 135 yards passing and one touchdown, and Jelani Greene (Newfield) caught six passes for 89 yards.

“This game is incredible to be a part of,” Catanese said. “The atmosphere, the coaches, the players; it’s the best of the best. Even though we came up short, I’ll never forget this night.”

The same goes for Harris-Legree, who used all the weapons at his disposal including high school teammates Kareem Davis (90 yards receiving) and Ahmed Bah (game-high seven receptions.) Adeola Oni (Port Richmond) had 99 yards and one touchdown, and Raheem Wilson (Cardinal Hayes) had 91 yards and a score as New York City amassed 392 of its 494 yards through the air. Harris-Legree also caught a 21-yard pass from Aaron Grant (Erasmus Hall) in the fourth quarter. Justin Covington (Cardinal Hayes) led all rushers with 60 yards and two touchdowns.

Long Island trailed 20-14 after Wilson’s 7-yard touchdown grab on the final play of the first half but opened the third quarter in impressive fashion to tie it. The final play of a 71-yard touchdown drive was a thing of beauty, with Jude Innocent (Roosevelt) scoring from 17 yards out on a hook-and-ladder toss from Mike Elardo (Syosset), who caught a short pass from Klemm on fourth-and-12 from the 22.

New York City responded with touchdowns on its next two possessions — a 3-yard run by Covington 1:12 into the fourth and a 1-yard run by Harris-Legree with 5:16 remaining.

“That kid shows up in big games and this was another one,” Grand Street coach and NYC offensive coordinator Bruce Eugene said of Harris-Legree.

With the loss, Long Island’s lead in the series dipped to 12-7. Fourteen of the 19 meetings between L.I. and NYC (in 1996 and ‘97 the game featured Nassau vs. Suffolk) have been decided by fewer than eight points, including four by a point.