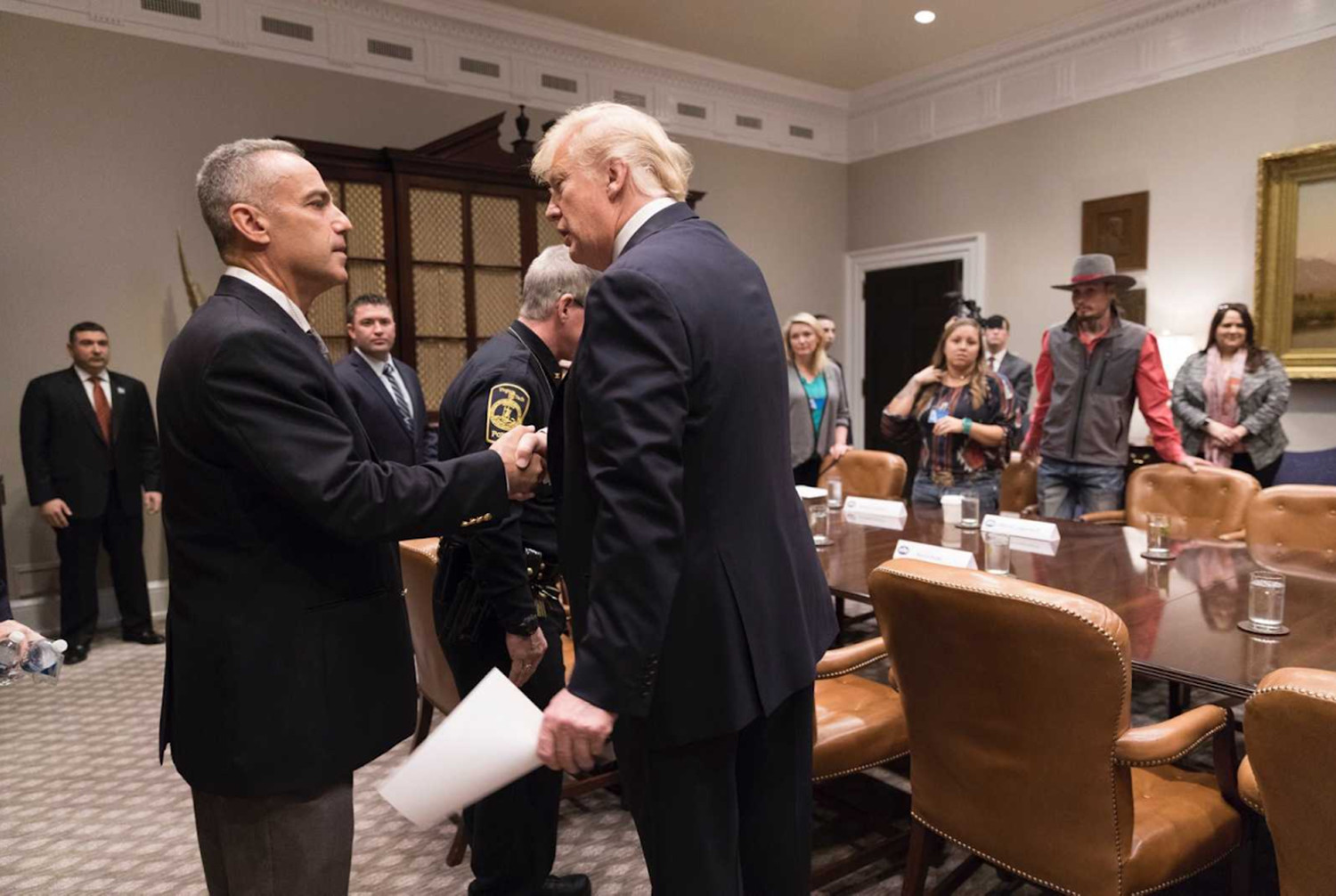 Oceanside native Andrew Pollack met with President Trump soon after the murder of his daughter in the Parkland, Fla., massacre. They agreed that change is needed.
Courtesy Andrew Pollack 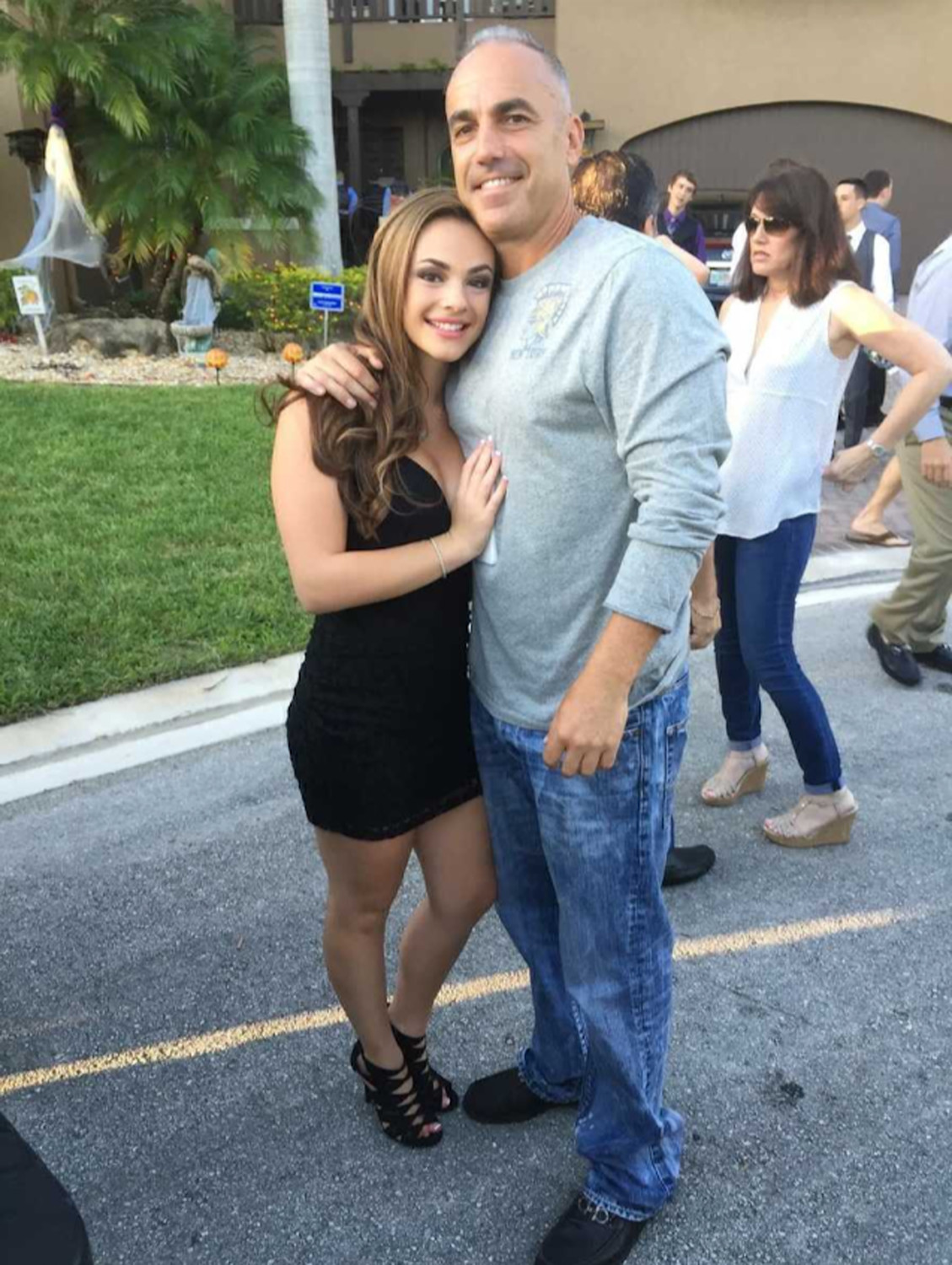 Pollack and his daughter Meadow, for whom a garden and playground in Parkland, Fla., will be named.
Courtesy Andrew Pollack

What we need to do as a country is come together and focus on school safety.”
Andrew Pollack, former resident
By Matthew D'Onofrio

On Feb. 14, former Oceansider Andrew Pollack said, his heart split in half when he learned that his daughter Meadow was one of 17 people killed in the Marjory Stoneman Douglas High School shooting. Since then, he has taken the nation by storm, appearing on national television and at the White House to apply pressure to elected leaders to upgrade school safety measures.
“If it could happen to me, just a regular guy from Long Island, then it could happen to anybody,” said Pollack, a member of Oceanside High School’s class of 1984, who now lives in Parkland, Fla. “I had the greatest years of my life going to Oceanside High School. We weren’t worried about school shootings. We were worried about who was having which parties and where.”
On the day of the massacre, Pollack rushed to his daughter’s high school once he heard there was an active shooter inside the building, and displaying a photo of Meadow on his cell phone, he desperately asked people whether they had seen her. He didn’t find out what happened to her until later that night, when he was told that she was found at the school, dead.
Today, Pollack said, he believes every school is a potential target for shooters, noting, “Evil has no boundaries.” Days before he made his Feb. 21 national television debut, for which he gave a speech in front of President Donald Trump at a listening session at the White House, he and his family had met privately with the president in Florida.
Trump “just wanted to meet us. He was concerned and said he wanted to try and do what he can to not make this happen again,” Pollack said. “The guy, he’s a regular guy. He’s not the normal politician that people are used to.”


Trump backed a bill passed on March 9 by the Florida State Legislature that Pollack helped influence. Pollack said the law, known as the Marjory Stoneman Douglas High School Public Safety Act, is all about what he calls “school hardening,” which boils down to children feeling as safe in school as people do when boarding a plane or attending a concert.
The bill authorizes grants for a student crime watch program, establishes state agencies dedicated to improving school safety, prohibits the mentally ill from owning firearms, bumps up the minimum age to purchase a firearm from 18 to 21 and allows sheriffs’ departments to implement a civilian watch known as the Coach Aaron Feis Guardian Program, according to the Florida state website.
Pollack explained that the guardian program is voluntary, and features a month-long training regimen for which anyone can sign up. Applicants must pass a background check, a drug test and a psychological evaluation before approval, and after completion, they are appointed by the sheriff to be positioned at a school as long as administrators allow it. These armed “school resource officers” will be to schools what air marshals are to planes, he said.
Citing the namesake of the program, Pollack remarked that had Feis, a Stoneman Douglas football coach, been armed, he and the children he was trying to protect when he shielded them with his body might still be alive.
“I believe in the Second Amendment,” Pollack said, but quickly added that he is no gun expert and leaves the gun-control arguments to the experts.
Although Pollack said he was pleased by the passage of the Florida bill, he added that he is not yet finished. He is currently working with lawmakers on similar federal legislation, which he said has bipartisan support.
Additionally, he said, he wants versions of the Florida bill to be exported to other states, including New York.
“I look at Andy, and I feel for him,” Oceanside resident and parent John Mannone said. The two went to high school together, Mannone said. “He’s doing all of this in honor of his daughter, and that’s just one of the greatest things a father can do.” Mannone agreed with Pollack that shootings like the one in Parkland could happen anywhere in the United States, and that change is necessary — parents must stay aware and speak up instead of ignoring the issue and simply pointing fingers.
Pollack advised Oceanside residents and parents to make sure their children are safe at area schools, and mentioned that he would return to the area sometime in August.
Until then, followers can keep up with his efforts via his Facebook group Meadow’s Movement and website RememberMeadow.com. Through the website, donations are accepted and T-shirts are available for purchase with “Parkland Strong” written on the front, featuring the Stoneman Douglas logo, and “Play For Meadow” on the back, with a custom logo for a few high school teams, including the Long Beach Marines and Oceanside Sailors. Proceeds will go to build Meadow’s Garden and Playground in Parkland. Pollack said he came up with the idea while visiting his daughter’s grave in Florida.
As of press time, Meadow’s Garden and Playground has raised more than $100,000 via PayPal since it started accepting donations on Feb. 24, with a goal of $1 million. Oceanside alone has raised roughly $3,000 in T-shirt sales and donations, according to family member Debra Rubenstein Rivera, who lives in Long Beach.
“She was a very, very special young lady . . . beautiful, kind. She will never be forgotten,” Rubenstein Rivera said. “Meadow’s Movement will help keep her memory alive.” She added that Long Beach lacrosse will play Ocean-side at Long Beach High School on March 27, and both teams are planning to wear their team-designated Meadow’s Movement T-shirts. There will be a ceremony and memorial for Meadow at the game.
Of Meadow’s park, Pollack said he hopes that one day he might sit on a bench there, watching children play, reminiscing about a time when his daughter was their age and perhaps finding some peace and comfort.
“I feel the prayers coming from Oceanside, and I have a big place in my heart for them,” he said. “I got Oceanside in my bones and blood. I’ll always be an Oceansider.”
Report an inappropriate comment

Unserviceable flags given a dignified disposal

Book Buddies visited by a dog of many vests