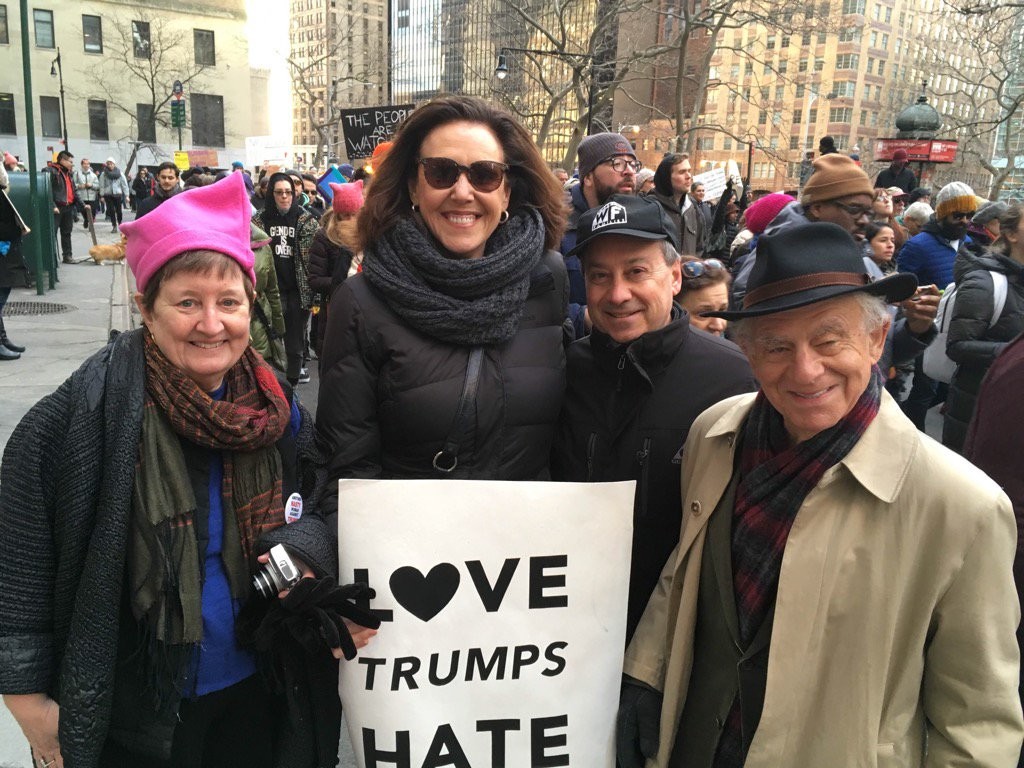 Liberal political pundit and Oceanside native Joan Walsh, center, at the Women’s March in New York City last January. She spoke to the Herald about growing up on the Island and how the current political climate could affect local residents.
Courtesy Joan Walsh/Twitter
By Zach Gottehrer-Cohen

Last month, Oceanside native Joan Walsh, a political commentator and national reporter for The Nation, made headlines when MSNBC decided — to the chagrin of many of her fans and her colleagues at the network — not to renew her contract.

The hashtag #KeepJoan Walsh was trending on Twitter by the time she was approached by CNN and offered a position there. Last week, before she began her new job, the Herald asked her about her Long Island roots, and about how local and national politics intersect.

“They were the wonder years,” Walsh said of her childhood in Oceanside. She grew up in the 1960s and early ’70s on Nassau Road, near Suffolk Court, on the west side of the hamlet. She recalled her excitement when the area’s first McDonalds came to town, and said of Lincoln Plaza, across the street: “It was really the international future of America in that shopping center,” which at the time featured Chinese cuisine at Hoo King, a Jewish deli, a pizzeria, a bakery and a Walgreens.

Walsh frequently returns to Long Island, and has spent the past five Christmases in Long Beach with some of her 13 cousins who remain on the Island. She and they attended St. Anthony’s Catholic school in Oceanside, and her father was the parish council president.

Reflecting on the Democratic surge in the November election, in which Laura Curran became the first woman elected county executive and Laura Gillen became the first Democrat to win the Town of Hempstead supervisor’s seat in over a century, Walsh said, “I think what happened in Long Island and Nassau is also what happened in Virginia and in Alabama.”

In Virginia, the balance of power in the House of Delegates, controlled by Republicans since 1999, may come down to a lottery-style random name drawing, with Democratic House candidate Shelly Simonds and Republican David Yancey remaining tied two months after the state election. And in Alabama, Doug Jones became the state’s first Democratic senator since 1992, defeating Republican Roy Moore.

Though Walsh said she did not believe there was single explanation for the turnarounds in these three states, she said, “We’re seeing suburban women go from being apolitical to political, or from even being kind of conservative to voting Democratic. It was part of the national trend.”

She talked of the “resistance,” a loosely defined local activism in opposition to the Trump administration. “The resistance is happening mostly in the suburbs, and it’s mostly women,” she said. “But it’s not just Democrats, and it’s not just younger people. Some of it is Republican-leaning women who stopped voting, or women who were busy raising kids.”

Walsh said that much of the new energy is coming from “these new pop-up groups,” like Indivisible, a nationwide activist group that played a key role in the Nassau County Democrats’ November sweep. But she added that it’s too soon to tell whether the party is going to be able to tap into these groups in the run-up to the 2018 midterm elections.

“It’ll be interesting to see if the Democratic Party can coordinate with these new groups,” she said. “I assume they’re hearing an earful at the end of this year. Between Alabama and Virginia, a lot of [these unexpected swings] are getting attention. Democrats who are not trying to learn from those places, well, they’re just dumb.”

In terms of the effect that national politics might have on Long Islanders, Walsh said that while big-ticket items like the Republican tax bill get much of the attention, the policies that could have the most far-reaching effects might be the ones that fly under the radar. She noted the recent rollback of fines against nursing homes that violate federal regulations, which could have a disproportionate impact on Long Island’s aging population: According to the Rauch Foundation’s Long Island Index project, the population of Long Islanders age 55 and over has grown at more than six times the rate of the overall population.

Of all the things that concern Walsh about the Trump administration, the one that she said keeps her up at night is its manipulation of facts. “When Donald Trump calls something fake news, and Kellyanne Conway calls something alternative facts,” she said, “it’s hilarious. It’s a ‘Saturday Night Live’ routine. We chuckle. But then they’re actually right. We’re working with a different set of facts, and I don’t know how to fix that or change that.”