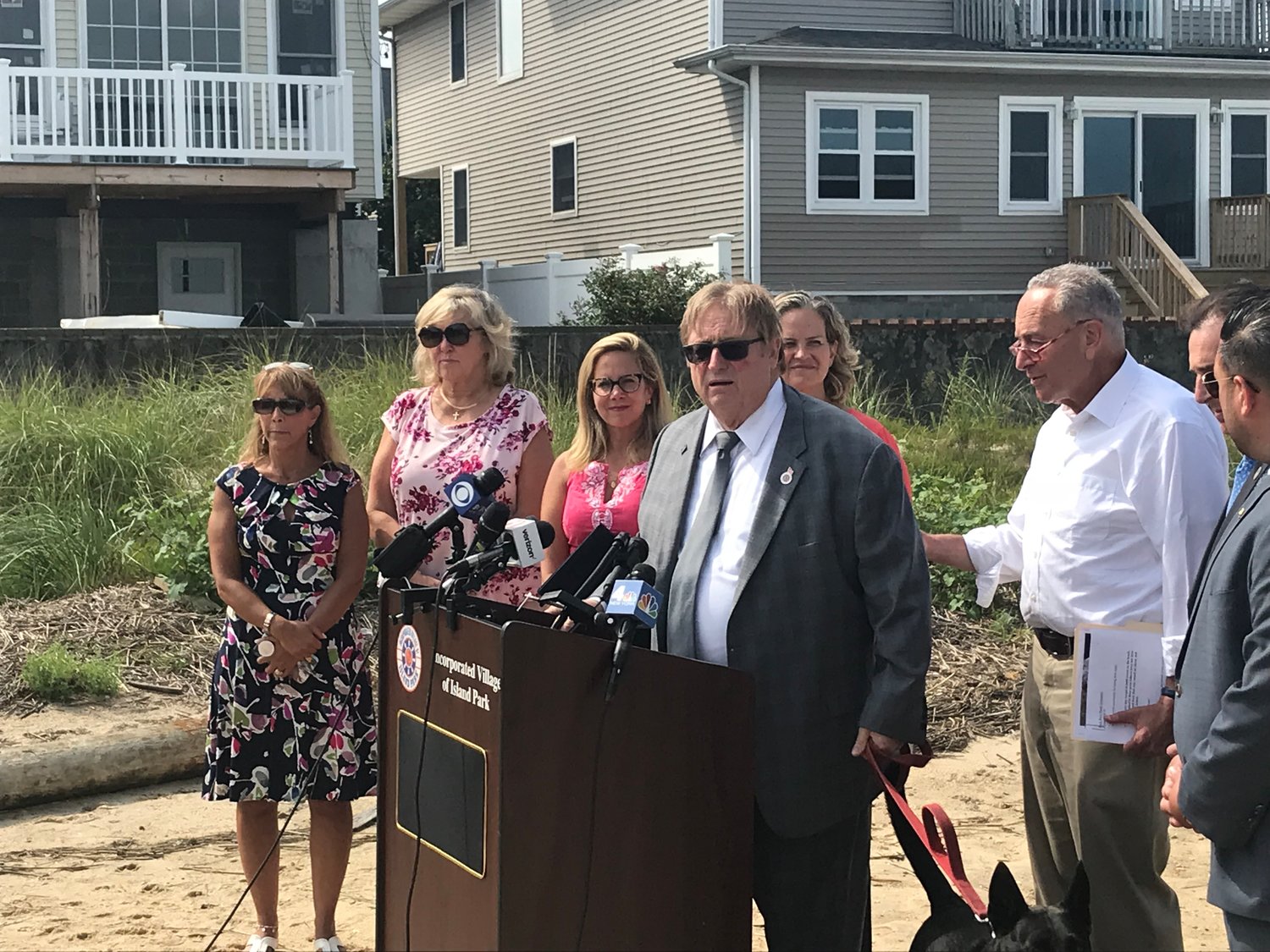 Island Park Mayor Michael McGinty and several elected officials called on the U.S. Army Corps of Engineers to extend the back bays study to ward off potential damage from future storms on Sept. 4.
Mike Smollins/Herald 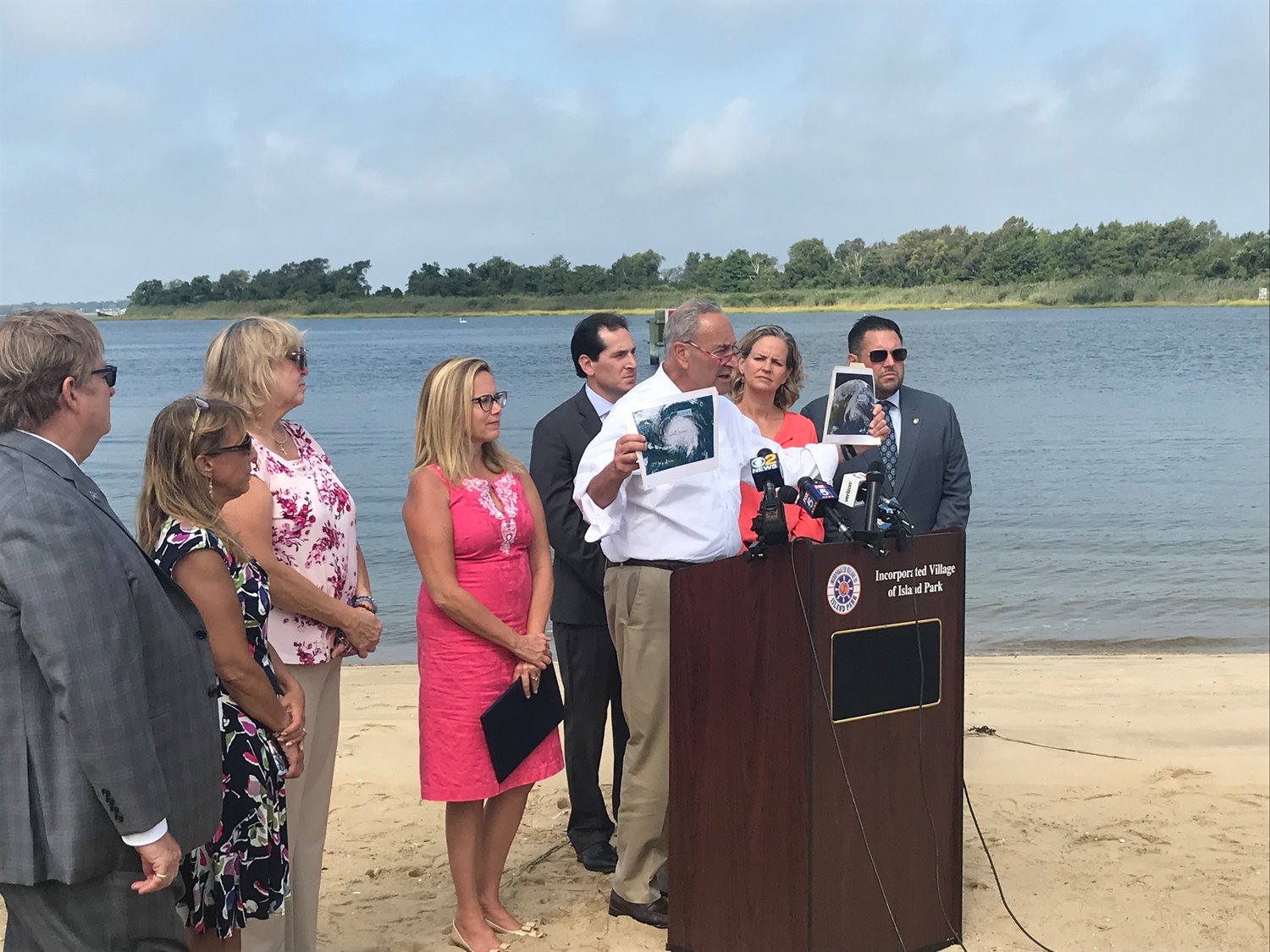 U.S. Sen. Chuck Schumer held up satellite images of Hurricanes Sandy and Dorian and compared them while urging the Army Corps to continue the study.
Mike Smollins/Herald 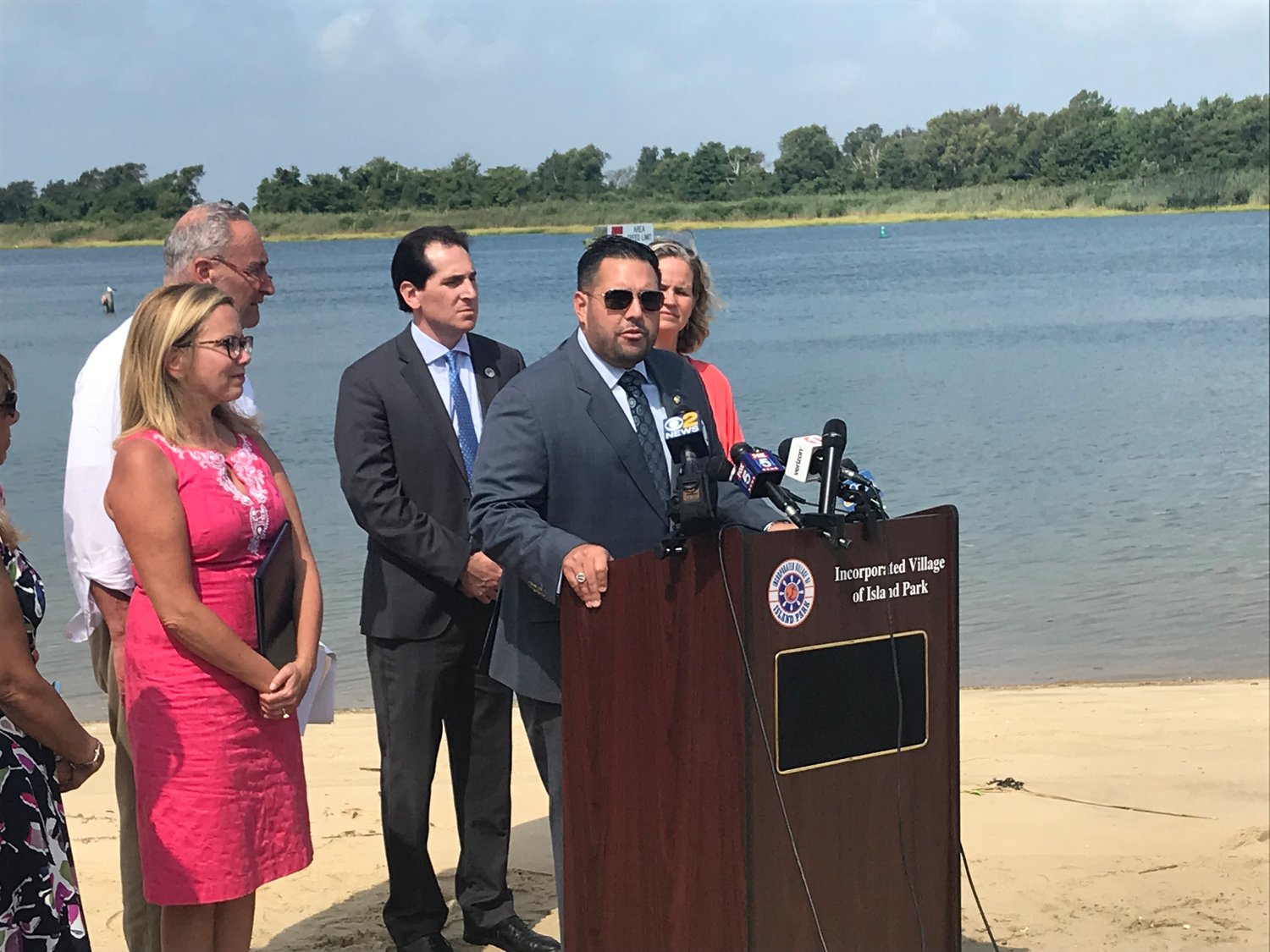 Hempstead Town Councilman Anthony D’Esposito, of Island Park, said he recalled serving as the Island Park Fire Department chief during Sandy, and said he hoped to never see such a storm devastate the area again.
Mike Smollins/Herald
Previous Next

Resilience means making sure things are protected before the hurricane comes, so when it comes, we won’t go through the horror that we went through with Sandy.”
Chuck Schumer, U.S. senator
By Mike Smollins

Standing on the “Little Beach” in Island Park, which has eroded over the years, Sen. Chuck Schumer and local officials urged the U.S. Army Corps of Engineers to approve a $6.1 million extension of the Nassau County Back Bays Coastal Storm Risk Management Study on Sept. 4.

The study, which focuses on flood prevention for 30 miles along Long Island’s South Shore, is set to expire on Sept. 30. Schumer called on the Army Corps to sign an extension of the project, using money already allocated in the federal Hurricane Sandy relief fund.

“We’re in hurricane season, and that should be a reminder that we need to do everything we can to focus on what’s called resilience,” Schumer said. “Resilience means making sure things are protected before the hurricane comes, so when it comes, we won’t go through the horror that we went through with Sandy.”

In 2016, the Army Corps invested $3 million on the three-year examination of bulkheading, drainage, tidal gates and other flood control projects for coastal communities. The Army Corps’ Philadelphia district is handling the study.

Scott Sanderson, the project manager for the U.S. Army Corps of Engineers, said that because of the size and complexity of the study, the Philadelphia district submitted an extension request to Army Corps headquarters in Washington, D.C. He added that they also need approval from the Assistant Secretary of the Army for Civil Works.

The corps’ standard policy is to complete projects in three years or less for $3 million or less, but Sanderson said the district needs an extension given the size of the area being examined. The Army Corps and the New York State Department of Environmental Conservation handled the funding. “We have submitted a request for an exemption from the three-year study requirement and are awaiting the results of that process,” Sanderson said.

But time is running out, with a Sept. 30 deadline approaching. Because there are hundreds of thousands of people living on the South Shore and several elements that go into the examination, such as which direction potential hurricanes would come from and other logistics, it has taken longer than expected. The Army Corps has spent three years studying how to shield Nassau’s coastal communities from surges, floods, wind damage and erosion, but Schumer said it could all be for nothing if the study expires.

“All of that could erode away if we don’t act fast,” he said. “Our critical efforts to protect Nassau’s back bay communities from hurricanes and storms could drown in bureaucracy, unless the Army Corps acts.”

The study would likely take another three years if extended; however, the timetable could change given its scope. Funding includes a wide range of projects, such as flood barriers and simulations of future storms across the 30 miles of shoreline. Potential solutions that have been proposed to combat future storms include floodwalls, levees, surge barriers, cross bay barriers and “living shorelines” — protected coastal edges made from plants or rocks.

Kaminsky said rising sea levels and severe storms would continue to harm the South Shore in the future, and that measures must be taken soon to ensure that a storm similar to Sandy does not devastate the area again.

“We know what we have to do,” Kaminsky said. “We all learned the hard way. These houses had water up to their kitchen countertops. ... We need to live in a resilient world, and that world is going to be created by this back bays study. It must get completed.”

Gillen said the majority of the study includes the Town of Hempstead, which has 150,000 structures and $100 billion in damageable assets. She added that the devastation Hurricane Dorian wrought on the Bahamas underscores the need to complete the study.

“The importance and urgency of getting through this project should be obvious to the Army Corps,” she said. “The consequences of cutting and running before the mission is complete could be disastrous to the many families who live here on the South Shore of Nassau County and in the Town of Hempstead.”

Curran said it would be a waste of time, resources and research to give up on the study after three years of effort. “It makes me very sad to think that all of that intelligence and all of that work will just come to a grinding halt,” she said.

D’Esposito, an Island Park resident, recalled lifeguarding on Masone Beach and traveling to the “Little Beach,” which used to be a lively hangout before it eroded. He also recounted serving as the chief of the Island Park Fire Department during Sandy and being devastated to see people he knew his entire life carrying baskets filled with all of their belongings as they left their damaged homes.

The extension would give the Army Corps until April 2022 to release its final report. At that point, the findings would be submitted to Congress for review. Sanderson said he was uncertain how long Congress would take to approve the study.

Having a Happy Hanukkah in Hewlett