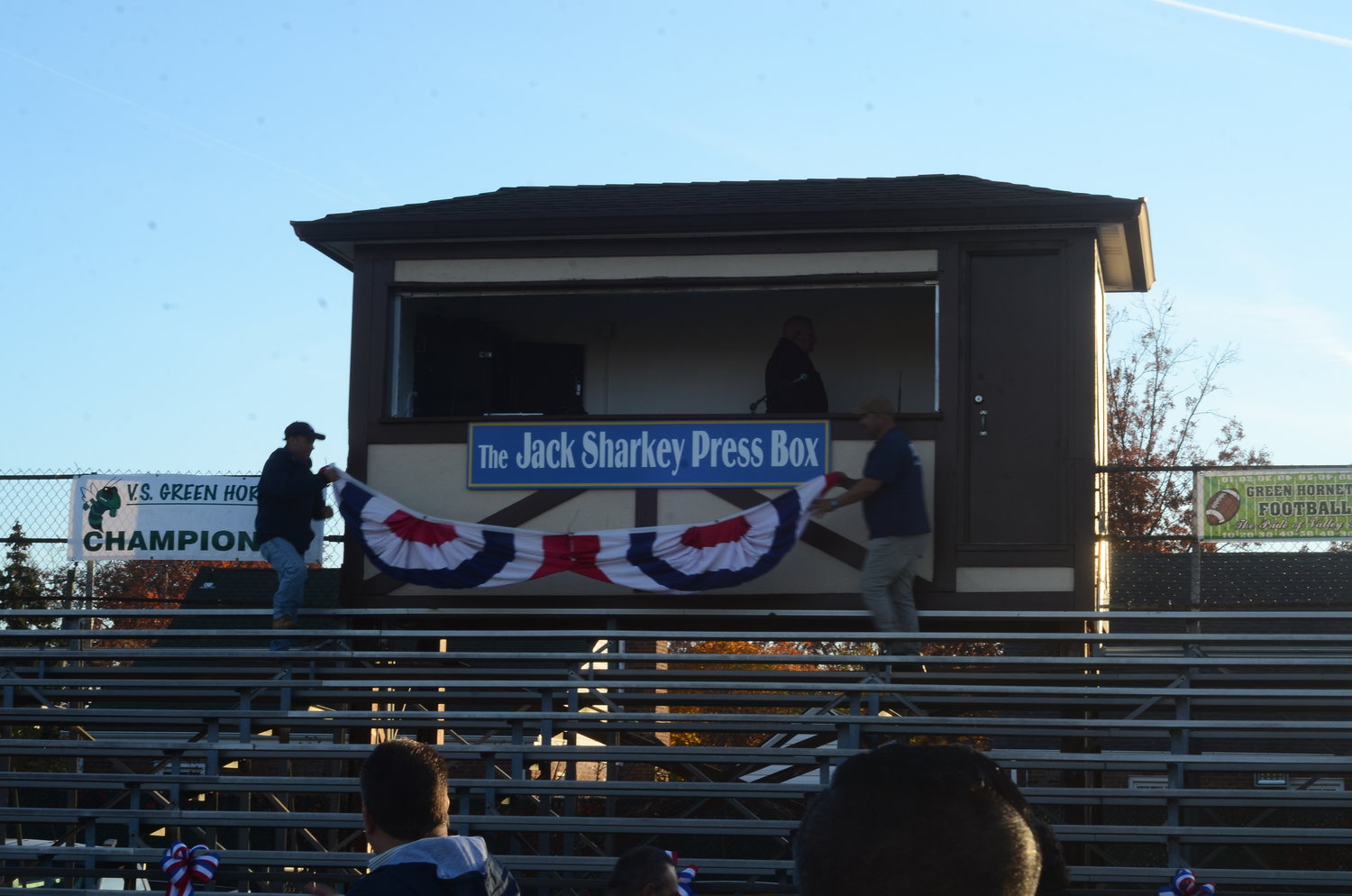 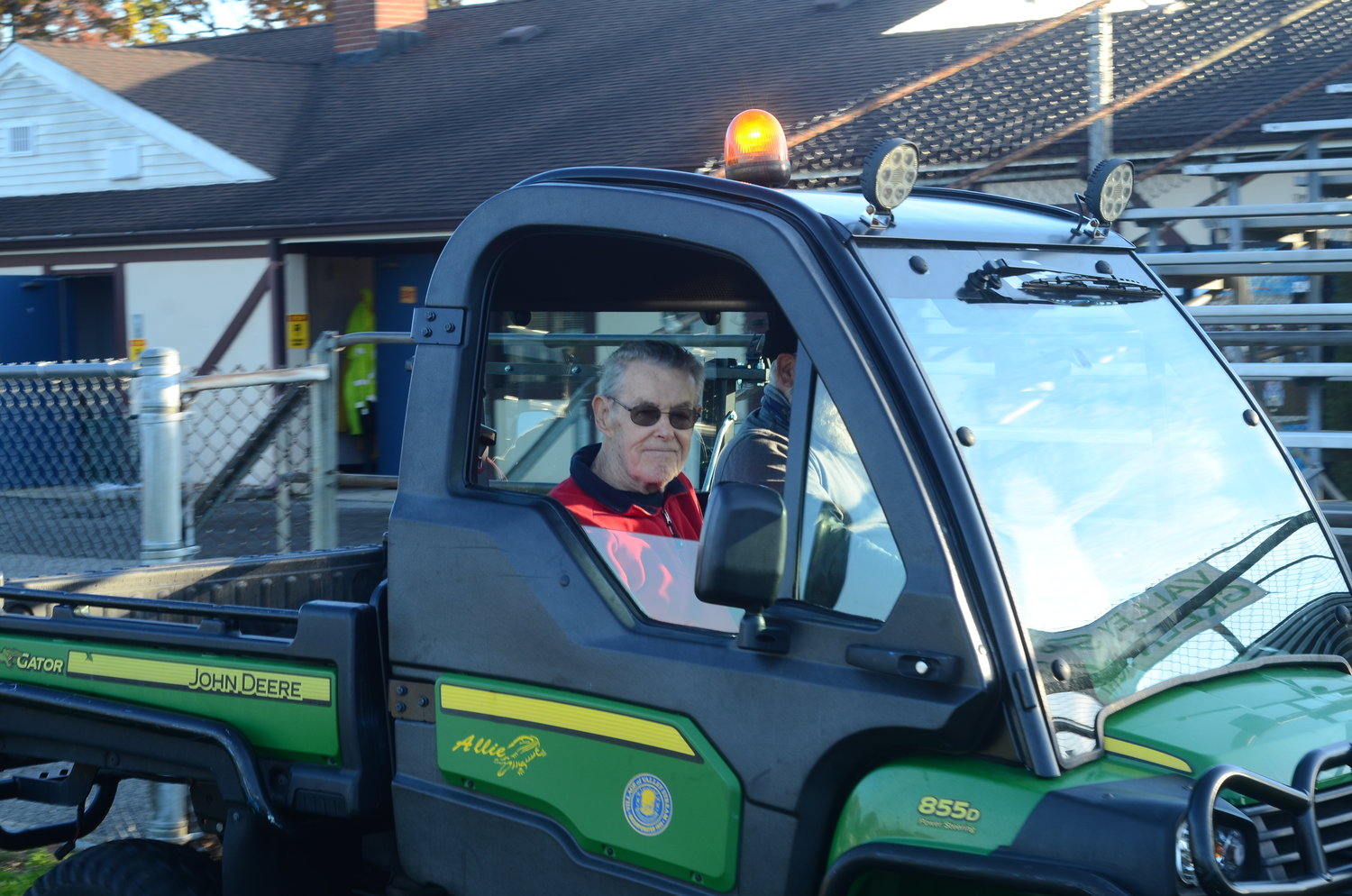 Jack Sharkey, escorted on a John Deere truck, was a village trustee and deputy mayor from 1987 to 1990, and served as a coach and president of the Green Hornets.
Juan Lasso/Herald
Previous Next

Take home in your hearts that you’ve made a very happy man.”
Jack Sharkey, village icon
By Juan Lasso

Amid the quiet backdrop of a bright evening last Thursday, a crowd of residents, village officials and community dignitaries gathered next to the bleachers at Fireman’s Field in Valley Stream. The prevailing mood of attendees was lively and informal, less like a ceremonial assembly and more like a reunion of old friends. People milled about, talking, excited to see one another. Many had come on short notice, leaving work and canceling plans, brought together to celebrate the life of one man: Jack Sharkey.
Sharkey, who was the announcer for the Green Hornets youth football and cheerleading organization, which he served for several decades, was there for a very special occasion. The press box at the field was named in his honor Nov. 18.
Sharkey, 91, wearing a slim-fitting red coat, sat modestly in repose, with his walking cane in one hand and a serene look on his face. He greeted people as they approached him, drawing them in with a tender smile and a gentle, tugging grasp of the arm. He seemed bent on embracing everyone who came his way.
Those unfamiliar with Sharkey’s long list of contributions to the village may better recognize him as the announcer during the previous year’s Memorial Day parades in the village. For nearly 40 years, Sharkey was a mainstay on the reviewing stand, electrifying the crowd on Rockaway Avenue in anticipation of each veteran group and naming each one that marched by. A distinguished Korean War Air Force veteran, and member of the American Legion Post 845, Sharkey felt more at home spotlighting his fellow veterans for their valor than singing his own praises. From his early beginnings in the village, Sharkey had a penchant for making people feel acknowledged.
As the sun dipped below the horizon, members from the Recreation and Public Works departments helped Sharkey into the village’s John Deere Gator truck. With the window drawn open, he gave a fatherly kiss on the cheek to Recreation Department Director Jimmy Fitzano, who helped close the door for him, thanking Fitzano and his crew, before the motor escort took Sharkey to the ceremonial grounds. A procession of eager, flag-waving residents marched close behind him.


Sharkey was honored on the same field that he had spent decades on as a proud member of the Green Hornets, for which he served as a business manager for the Peanut Division, vice president, president and coach. It was the site where he mentored, counseled and befriended so many village children, most of whom are now adults.
“People, without fail, to this day, will go up to him and thank him for the lessons my father taught them during childhood,” said Michael Sharkey, Jack’s oldest son.
“The contributions he made to the Green Hornets were just incredible,” said Sharon Daly, former president, cheerleading director and board member of the Green Hornets. “He did everything with love and dignity . . . He would welcome the new families throughout the year, and the annual announcer at our banquets through the year. He was there every weekend during the practices, at the meetings and all the boat trips.”
As the crowd settled into their seats, Valley Stream Mayor Edwin Fare took the lectern. “In consultation with his son Michael and his extended Valley Stream family, the decision was made to dedicate a part of the village that was especially near and dear to Jack…something that spoke to his special talent and personality,” Fare said.
“His distinctive voice could often be heard addressing the crowds from high atop the bleachers behind me at the broadcast booth above us,” Fare said. “What better spot to honor Jack, the coach, the friend, the mentor and the announcer.” The mayor called the crowd’s attention to the broadcast booth as officials dropped the banner to unveil the newly installed plaque that read, The Jack Sharkey Press Box.
Jack was helped to the lectern, where he spoke, holding back tears. “...I want to—just once—to say to all of you: I love you so dearly, and I love the Village of Valley Stream so dearly. And I love the fact that our mayor read his speech exactly as I wrote it,” he said to roaring laughter and hearty applause.
“Take home in your hearts that you’ve made a very happy man,” Sharkey said.
Report an inappropriate comment